A new type of spectrally selective photovoltaic and thermal collector can simultaneously produce both electricity and thermal energy at 300°C.
15 July 2015
Todd Otanicar and Drew DeJarnette

The increasing usage of photovoltaics (PV) for producing electricity from solar power seen in many countries throughout the world is a very positive development for further growth of the solar energy market. While PV is becoming a low-cost option for solar electricity production, most commercial systems use only a limited portion of the available solar spectrum, and the cost of storage is prohibitive. Concentrating solar power (CSP) systems—an approach based on converting sunlight into thermal energy that can be used in a steam cycle—have also been proliferating throughout the world, with many active projects in the southwest United States, Europe, and North Africa. CSP is able to capture the whole solar spectrum and can effectively store thermal energy for low cost, but suffers from levelized costs of electricity (i.e., the cost per kilowatt-hour to build and operate a plant over its lifetime) higher than those of PV.

Hybridized photovoltaic and thermal (PV/T) systems typically operate at low temperatures to minimize the PV device temperature. These systems are limited to producing electricity from the PV and low-grade thermal energy. To meet these challenges, the Advanced Research Projects Agency-Energy (ARPA-E) created the Full-spectrum Optimized Conversion and Utilization of Sunlight (FOCUS) program. The goal is to take the best technologies from the PV and CSP sectors and create systems capable of delivering low-cost and dispatchable solar electricity. To do this, solutions are required for concentrating PV/T (CPV/T) systems that effectively use the whole solar spectrum, primarily by optimizing solar energy streams delivered to the PV and thermal receiver components, respectively.

Most prior approaches use beam-splitting techniques, where the incoming solar spectrum is divided spectrally such that a portion of the spectrum is sent to each component, via a wavelength-selective reflecting and transmitting device.1 Such components are highly angle-dependent, and optical inefficiencies are not likely to be recovered elsewhere in the system. Our approach is based on wavelength-selective absorption using nanoparticle suspensions.

Nanoparticles possess unique optical properties that may differ significantly from those of the bulk material. In particular, by adjusting the size, morphology, and materials, the optical properties can be tuned: see Figure 1(a) for representative results. Using a mixture of nanoparticles, we have designed a new type of CPV/T collector. As shown in Figure 1(b), the nanoparticle suspension flows in front of the PV cell (not in direct contact with it), and the nanoparticle suspension efficiently absorbs the solar energy at wavelengths above the cell's bandgap. Our prior work showed that nanoparticle suspensions are effective for use in solar thermal collectors.2 We also actively cool the PV cell to minimize the cell temperature and maximize efficiency. 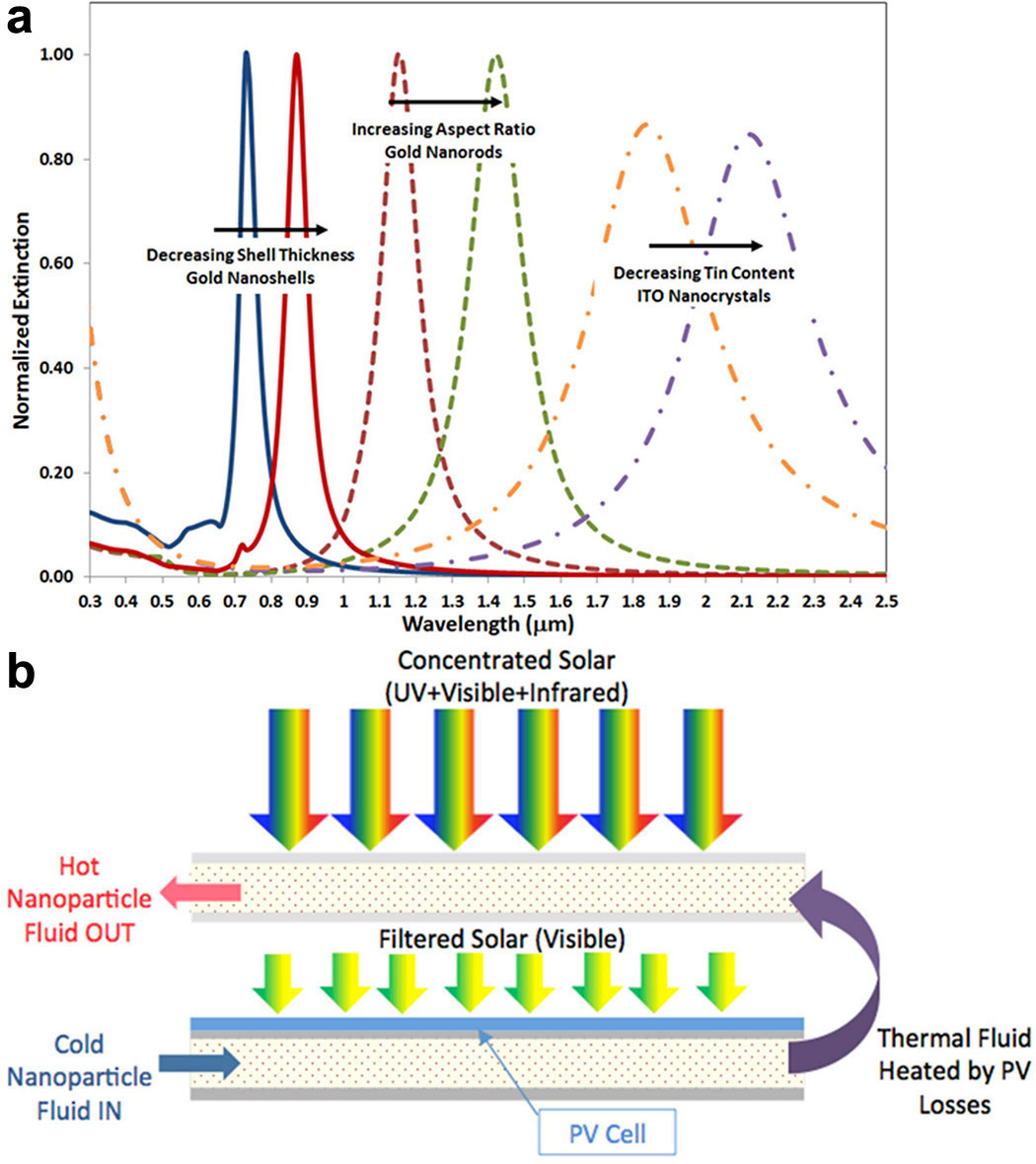 Our initial work has shown that a combination of gold nanorods and indium tin oxide (ITO) nanocrystals is capable of absorbing 80% of the energy at wavelengths above the cell bandgap directly into the working fluid, while absorbing less than 20% of the energy at wavelengths below the cell bandgap.3 We investigated a wide range of particle materials and morphologies, and discovered many particles with strong absorption at wavelengths greater than the cell wavelength. The particles we chose were selected on the basis of strong absorption below the cell gap and relatively weak absorption above the gap. Many particles were easily eliminated from the optimization because such materials and morphologies exhibited strong absorption or scattering above the cell bandgap. Moreover, we selected gold nanorods and ITO nanocrystals because of the ability to fine-tune the peak plasmon absorption to best match the solar spectrum in the IR. This design targets working with a gallium arsenide cell with a room temperature bandgap of 850nm, although we include the temperature-dependent bandgap in the design of the system.

The design of the working fluid is just the first step in developing a working CPV/T collector that uses a spectrally selective nanoparticle absorber. Our team is now working on advanced thermal and optical designs of a working full-scale prototype capable of demonstrating the combined production of electricity and 300°C heat. In addition we have synthesized the nanoparticles described here and are currently testing the optical properties at room temperature and up to 300°C. Through active collaboration with industrial sponsors we plan to demonstrate the system at a wide range of operating conditions on the 14× concentrator shown in Figure 2. 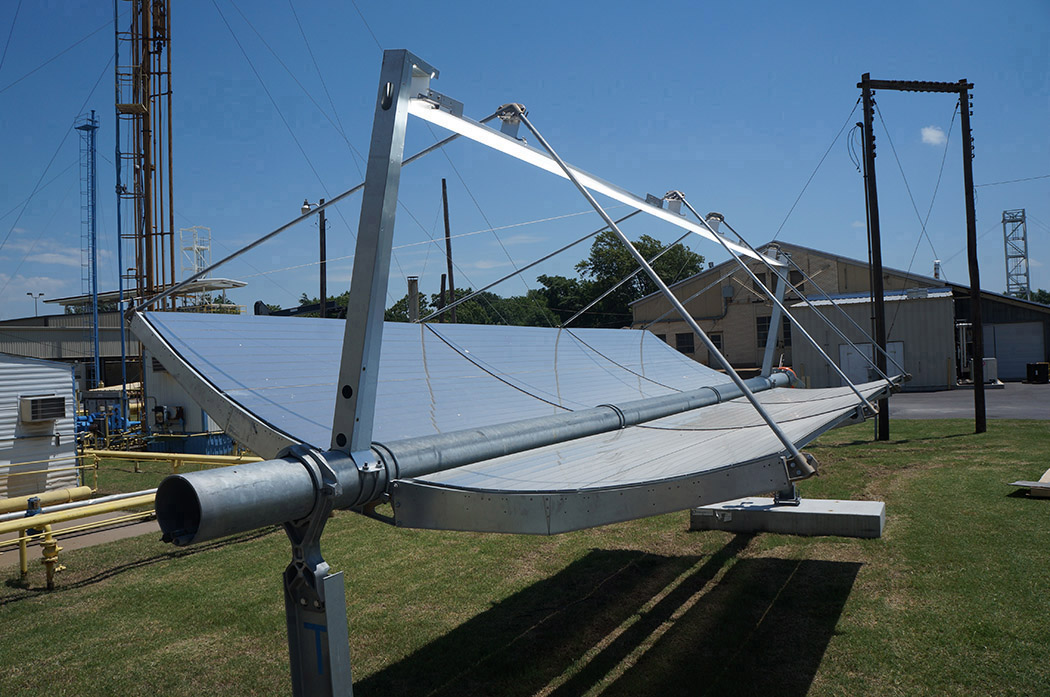 Figure 2. CPV/T system to be used for prototype testing with a concentration ratio of 14 suns based on the Cogenra Solar T14 system.

The authors would like to acknowledge the support of the Department of Energy ARPA-E FOCUS program under award DE-AR0000463.