An approach—based on energy deposition according to 1D exponential decrease of absorbed energy—for investigating the pulse duration dependence has previously been proposed.1 In this approach, it is assumed that the material is ablated up to a depth at which the absorbed energy per unit volume corresponds to the specific heat of evaporation. This method is independent of the pulse duration, but can only describe the quantitative trend of ablation efficiency with a fixed pulse duration. In a separate study, the thermal response of gold films irradiated with femtosecond and picosecond lasers were numerically analyzed.2 It was found that significant changes of reflectivity and absorption were caused by the variation in pulse duration. In that study, however, only the differences of the thermophysical properties were shown, and ablation efficiency was not accounted for.

We have developed a simulation model to further investigate the pulse duration mechanism that gives rise to the ablation efficiency dependency. With this approach we have demonstrated that the maximum melting volume of a thin molybdenum film is affected by the pulse duration (because of differences in temperature evolution).3 Our transient 3D axial-symmetric model is divided into three sub-models (optical, thermal, and mechanical) to cover all relevant physical phenomena. The optical model relates to optical reflectivity and absorption, the thermal model is used to deal with heating, thermal diffusion, and phase transitions, and the mechanical model covers thermal expansion, thermal stress development, and shock waves. Our simulation is based on copper, and we chose pulse durations of 500fs and 10ps (full-width half-maximum) at a wavelength of 1030nm. In addition, we applied a fluence of 2J/cm2 near the ablation threshold for both pulse durations.4, 5

In our optical model, we use the dielectric function to describe the optical properties of the material. We include the so-called Drude-critical point (DCP) model (which accounts for interband and intraband transitions) to provide the dielectric function—with the necessary precision—for copper.2, 6 There is a dependency between electron and lattice temperatures that occurs during electron–electron and electron–phonon scattering processes. We use the damping rate (part of the DCP model), which is reciprocal to the relaxation time, to describe this dependency. The electron–phonon collision frequency dominates at low electron temperatures, while the electron–collision frequency is the major part at higher electron temperatures. With the optical model, we are therefore able to construct a chain of causality for the influence of the pulse duration. We find that different laser pulse durations occur at the same pulse energy, which causes differences in electron and lattice temperatures to arise, which in turn causes different electron and lattice relaxation times, which finally produces the differences in optical properties. The transient behavior of the laser reflectivity and absorption coefficient (taken from the dielectric function) in our optical model is shown in Figure 1. 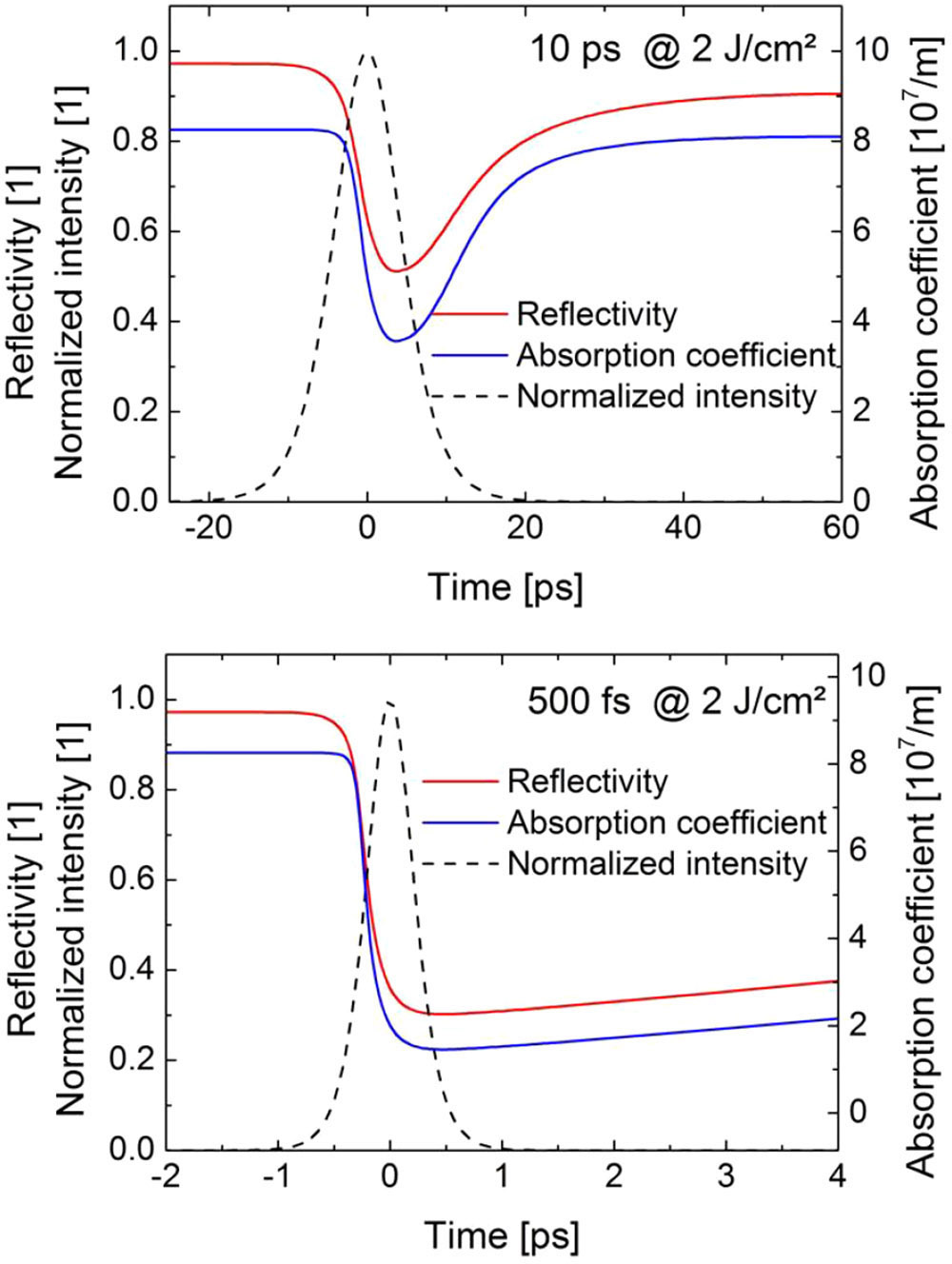 Figure 1. Temporal variations in reflectivity and the absorption coefficient for a copper target, as simulated in the optical model. Results for pulse durations of 10ps (top) and 500fs (bottom)—both with a fluence of 2J/cm2 and a wavelength of 1030nm—are shown. The black dashed line indicates the normalized (to a peak intensity when time equal 0s) intensity. The data is taken from the center of the target's surface. The reflectivity and absorption coefficient both decrease steeply from their initial values, down to minimum values where the maximum electron temperature is reached. Subsequently, both parameters increase because of a temperature decrease (caused by heat diffusion). The decrease in reflectivity and absorption coefficient is greater for the 500fs pulse than for the 10ps pulse because of higher peak temperatures.

Our thermal model is based on a two-temperature model. We calculate the electron and lattice temperatures by modeling the interaction between an ultra-short laser pulse and copper.4 The absorbed optical energy per unit volume is shown in Figure 2, as a function of depth in the target. The results for a 500fs and a 10ps pulse are shown in comparison with a simple exponential decay curve (with constant reflectivity and absorption coefficient values that are based on Beer's law). By reducing the pulse duration, the reflectivity decreases and more energy is deposited. The simultaneous decrease of the absorption coefficient, however, corresponds to an increase in the optical penetration depth and therefore a reduction in energy deposition. As a result, the optical energy deposition for both pulses is nearly the same, and we do not observe any significant deviation between the two simulations. Nevertheless, by considering the deposition of thermal energy with depth, we observe a significant pulse duration dependence on temperature. Shorter pulses produce higher surface temperatures and therefore higher temperature gradients. These gradients are the driving force for heat diffusion and result in greater thermal penetration depths. 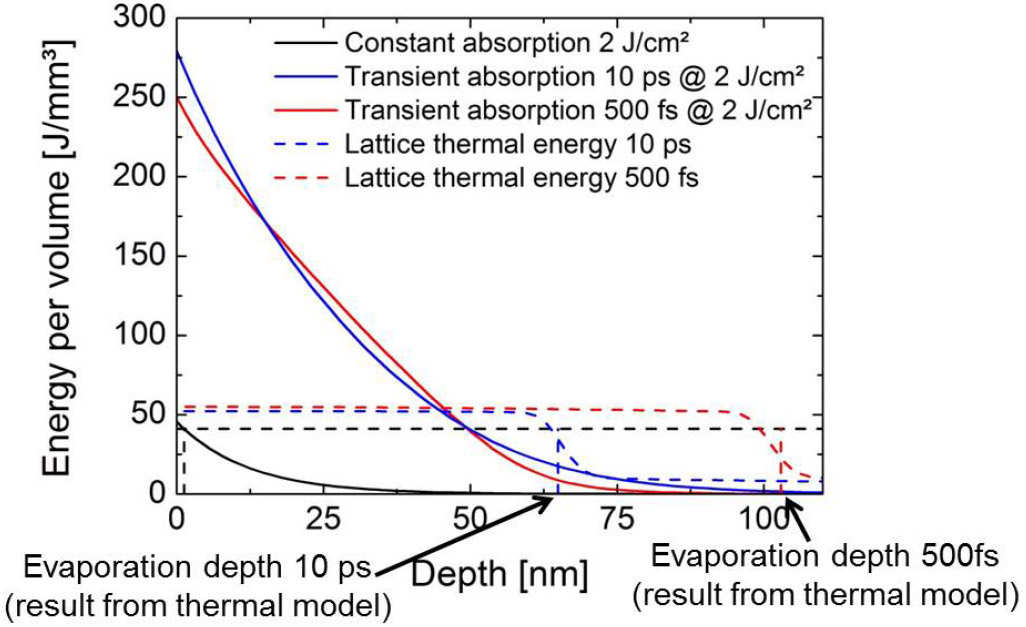 Figure 2. Energy per unit volume deposited with depth in the copper target. Simulation results for pulse durations of 10ps and 500fs—with a fluence of 2J/cm2and 1030nm wavelength—are shown. The black dashed line indicates an evaporation enthalpy threshold of 42J/mm3. The optical energy deposition is about equal for the 500fs and 10ps pulses. In contrast, the thermal energy density for the 500fs pulse has a deeper thermal penetration depth than for the 10ps pulse. The vertical dashed lines show the penetration depth for the maximum evaporation temperatures of both pulses. The black solid line is the simulation result for constant laser reflectivity and absorption coefficient values.

With our mechanical model, we observe that higher surface temperatures produce higher thermal expansions, in shorter times. This results in a higher thermal strain rate, and a pressure wave magnitude that is two times greater, for the 500ps pulse than for the 10ps pulse. We consider the ultra-short pulse laser ablation threshold to have a photomechanical rather than a photothermal nature. At this threshold, ablation is governed by a photomechanical spallation effect.7, 8 This can be thought of as a liquid ejected layer that is driven by a shock wave. In our study, the melting volume is higher for the 500fs laser pulse than for the 10ps pulse. The higher pressure wave magnitude—together with the higher melting volume (for the 500fs pulse)—leads to a larger volume of removed material at the same irradiated fluence. More efficient laser ablation can thus be achieved with the shorter 500fs pulses.

We have developed a new simulation approach to model laser ablation efficiencies. Our model is made of up three sub-sections. The optical model shows that the reflectivity of the laser decreases during the duration of a pulse, whereas the absorption depth increases. These effects are stronger for femtosecond pulses than for picosecond pulses. We find, however, that there is no significant difference between the two pulses for the amount of optical energy deposited per unit volume. In addition, our simulations indicate that the thermal energy is deposited deeper into the target material than the optical energy. This produces a higher volume of melted material. Finally, our mechanical model reveals that a higher heating rate results in greater thermal stresses and higher pressure wave magnitudes. As such, the volume of ejected material is larger for the shorter pulses and the ablation is thus more efficient. We note, however, that the precision for both pulse durations is very similar and is on the order of a few tens of nanometers. Femtosecond pulses therefore provide increased laser ablation efficiency (over picosecond pulses), while maintaining laser ablation precision. Several applications (e.g., stent cutting and injection nozzle drilling) can benefit from the superficial ablation efficiency and precision of femtosecond laser pulses. In our future work we will use a pump-probe microscope and a pump-probe ellipsometer to measure the relevant transient laser ablation phenomena, and we will compare our results with those from our simulation model.

This work was partly funded by the Seventh Framework Programme of the European Commission within the project Solardesign (under grant 310220), and by the Munich School of Engineering within the framework of the Technische Universität München Applied Technology Forum.