Human efforts to probe and commercialize space are continually generating debris,1 artificial objects orbiting the Earth including derelict satellites, rocket body parts, and small fragments produced by collisions between them. Calculated at about 3000 tons in low Earth orbit,1 such objects have become a major obstacle to further space development. They can collide with active space infrastructure, such as the International Space Station (ISS) and large derelict objects, creating yet more fragments. Since the debris is spread over many orbits and is of various sizes, it is difficult to monitor, much less capture. Many fragments (about one million of them) are smaller than 10cm across, making them impossible to catalog. Developing a way to eliminate them, termed remediation technology, has become a major challenge.

Laser impulse control holds promise. A burst of pulses can ablate the debris surface, reducing its velocity; a reduction of just a few percent in orbital velocity can be enough to modify the orbit and altitude of the debris toward re-entering Earth's atmosphere. Since the late 1980s, a number of both ground- and space-based designs have been proposed for delivering laser pulses to debris. The advantages of the space-based option, where remediation occurs in orbit, are hampered by the technological limitations of traditional pulsed lasers, such as their low electrical efficiency (≪1%), system sensitivity, and complexity. In 1989, Metzger and coworkers proposed a nuclear-powered debris sweeper with a 10kJ krypton-fluoride UV laser, pulsed at 1Hz.2 Recently, Phipps and, separately, Soulard and colleagues proposed solar-powered designs orbiting 800km above the Earth, where the debris population is greatest, that use efficient diodes to pump the laser medium.3, 4 Originally developed for laser-driven particle accelerators,5 the Coherent Amplification Network (CAN) laser system proposed by Soulard and team and based on optical-fiber amplifiers could also be suitable for space environments.

We have proposed using the International Space Station (ISS) for the staged development of remediation technology with the goal of achieving a freely orbiting mission.6 Our system combines the CAN laser with the Extreme Universe Space Observatory (EUSO) telescope. The telescope detects space debris and the laser removes it from orbit (see Figure 1). 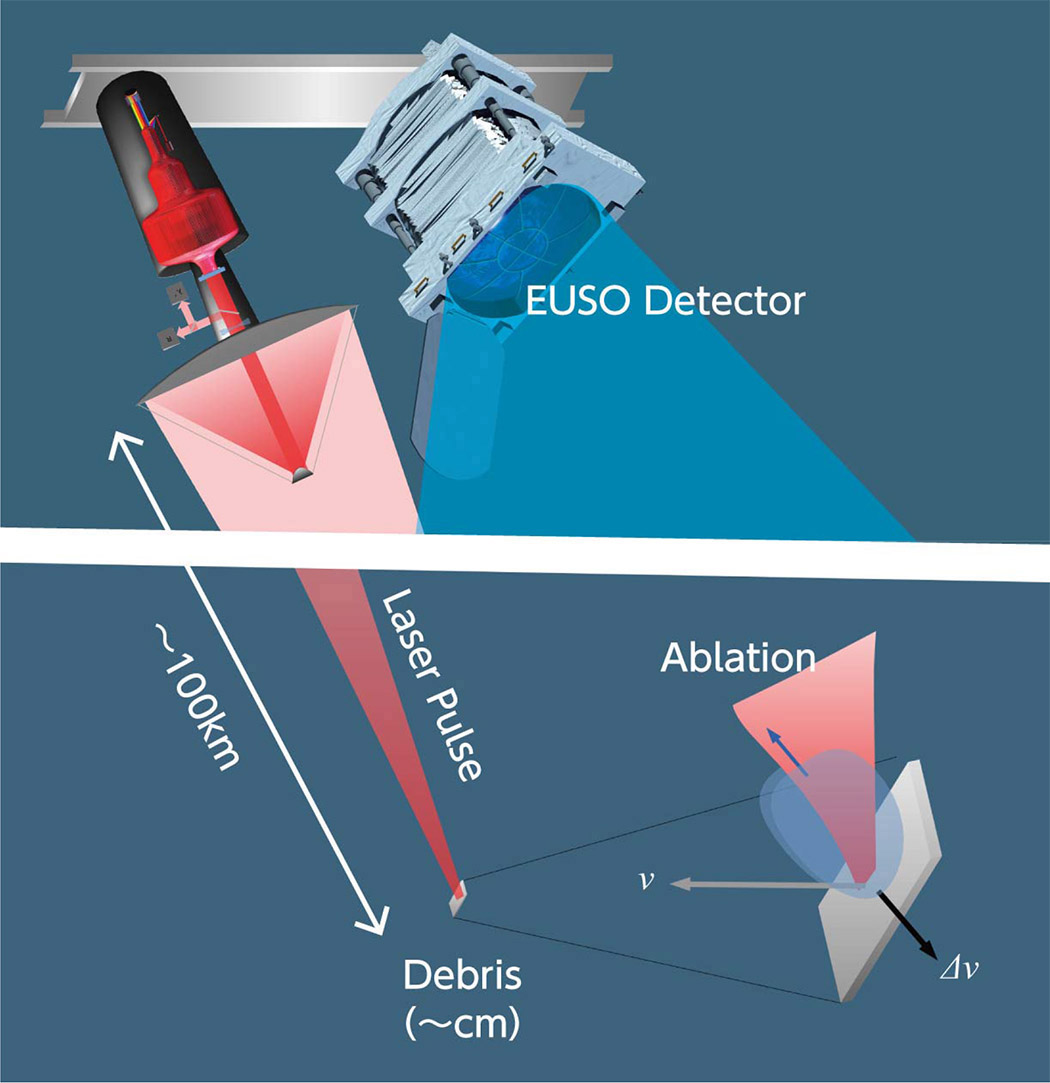 The EUSO telescope was originally designed to detect UV light emitted from air showers produced by ultra-high-energy cosmic rays entering the atmosphere at night. Planned for operation on board the ISS, the EUSO consists of a 2.5m Fresnel-optics refractive telescope with a ±30° field of view (FOV). Its powerful photon collection ability and wide FOV allow it to detect sunlight reflected by debris approaching a spacecraft from ±30°.

The CAN laser architecture consists of an array of optical fibers that transport, amplify, and combine light into a pulsed beam that can be focused and steered by internal phase control.4 This new laser architecture provides an efficiency near 30%, repetition rates of 105Hz, and high average power. The fiber-based transport gives it the increased robustness, compactness, and system stability essential for operation in space. Recent progress by the international CAN consortium has demonstrated high-repetition coherent combination of four fibers in short-pulse mode7 and 64 fibers in continuous-wave mode.8 The first full prototypes are in active development in projects such as XCAN at the École Polytechnique, France.

We have developed demonstration designs for scaling the EUSO detector and CAN laser from proof-of-principle prototypes to full-scale, ISS-based demonstrations beginning with a mini-EUSO (25cm aperture) before deployment of the full 2.5m experiment.6 The scalability intrinsic to the CAN laser enables progressive increases in the number of channels from 100 fibers (to test basic operation in space) to 10,000 fibers, capable of full debris remediation by atmospheric re-entry. After these demonstrations, we plan a freely orbiting solar-powered satellite for dedicated remediation missions at higher, more debris-critical altitudes, similar to the separate proposals made by Phipps and by Soulard and coworkers.3, 4

We systematically studied how the configuration of the EUSO and CAN in tandem can be used for debris remediation and found that this procedure divides into three stages: passive detection with a super-wide FOV camera; active laser tracking by a narrow FOV telescope; and velocity modification by laser ablation. First, passive detection is conducted with the EUSO telescope. The signal-to-noise ratio of the photons of sunlight reflected by debris (0.5–10cm) is estimated to be high enough to determine its position and relative velocity at a distance of 100km. Next, active tracking determines the debris position with higher accuracy, using pulsed laser light reflected and then collected by a conventional Cassegrain telescope. For full remediation, the CAN laser system delivers 100ps pulses of 10J at 50kHz rates (500kW in average power) to the debris. Burst operation of the laser system (about 10 seconds) suffices for atmospheric re-entry of the debris.

In summary, we have proposed a potential solution to a problem that is certain to deepen but presently lacks realistic remedies. Using two systems—the EUSO telescope and the CAN laser—currently being developed and used for other purposes, we can create a space-based laser system to remove space debris. We are now securing funding to test this system with a view to putting the dedicated free-flyer into place in 2025. The first stage, using the mini-EUSO on board the ISS, will start in 2018.

Toshikazu Ebisuzaki completed his PhD in astronomy in 1986 at the University of Tokyo, Japan. He is currently the principal investigator of the Japanese EUSO team. Since 1995, he has also served as the chief scientist at RIKEN. His research focus is in the fields of astrophysics and computational science.