The prototype of a small, lightweight, and modular robotic vehicle has been deployed through the McMurdo ice shelf in Antarctica.
24 June 2015
Michael E. West, Britney Schmidt, and Anthony Spears

Robotic platforms are typically required to explore the furthest reaches of Earth—and other planetary bodies—because of the extreme environments that are encountered in those places. For instance, results from the Voyager and Galileo spacecraft indicate that Europa (a moon of Jupiter) has an active outer ice shell and a subsurface ocean. Scientists now generally agree that this ocean lies between the approximately 30km-thick ice shell and the moon's rocky interior. It is also thought that there is a possibility for life to exist in this ocean. Future explorations of Europa, and the associated search for life, may therefore require an autonomous underwater vehicle (AUV) capable of self-deployment beneath several kilometers of ice.1–3

The best terrestrial analogues for the environments of Europa are found in Antarctica. In these locations multiple glacier systems flow off the continent and merge to form large permanent ice shelves. These large, thick ice masses float on the ocean and therefore provide Europa-like environments. These ice masses are also compelling for other scientific studies, such as investigations of glacial stability and sea level rise. The unique Antarctic ice shelves therefore serve as ideal test sites for the evaluation of proposed Europa missions (and associated technologies). A wealth of data pertaining to ice shelf processes, and their stability in a changing climate, can thus be obtained from these locations. In addition, data and images obtained from previously inaccessible parts of the Earth, using vehicles deployed through the Antarctic ice, can be used to frame socioeconomically important climate science.

During the austral summer of 2014, our team deployed a first-of-its-kind AUV through the McMurdo ice shelf in Antarctica. Our paradigm-shifting vehicle—known as Icefin—has a modular and field-portable design. It can be used to search in situ for biological communities and to map ocean water currents in rapidly changing polar environments. After an extremely rapid design-to-deployment cycle of less than eight months (typical design cycles for similar vehicles are on the order of two years), we deployed Icefin through a borehole and successfully collected sonar, imaging, and ocean water quality data (see Figure 1). 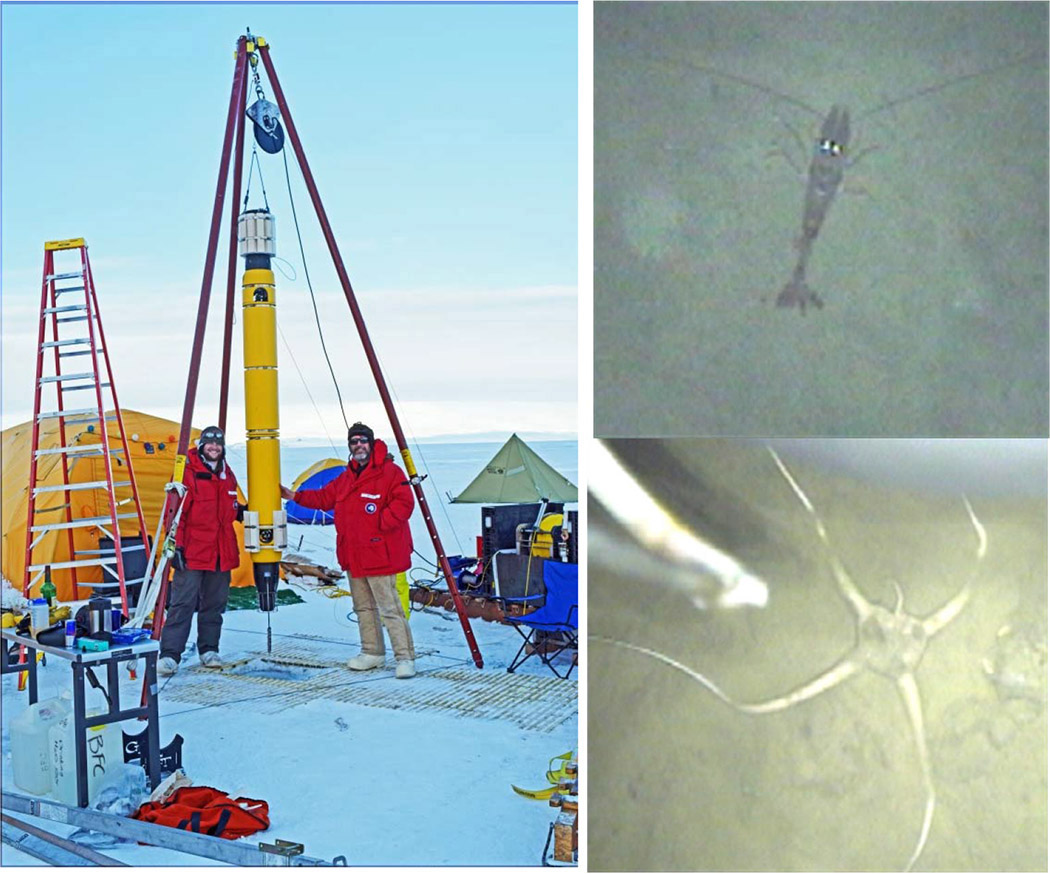 Figure 1. Photographs depicting deployment of the Icefin vehicle in Antarctica (left), and images of a large shrimp (top right) and a brittle star (bottom right) captured from the vehicle beneath the McMurdo ice shelf.

Mass is a major cost driver for all planetary missions, and a level of autonomy for all instruments is a prerequisite. By leveraging technology that we had previously developed,4, 5 we designed Icefin to provide a greater capability and simpler operation, relative to larger vehicles. Our current Icefin prototype has a diameter of 12 inches, a length of 10 feet, and weighs 220lb. Our optimized vehicle design consists of five modules—a nose cone, two vertical/horizontal thruster modules, a sensor bay, an electronics module, and a rear propulsion module—as shown in Figure 2. With these modules we can strategically improve the vehicle's guidance, navigation, and control (GNC), as well as its data systems. Icefin—as a relatively small modular vehicle—can be deployed through small holes drilled in ice, unlike large vehicles (e.g., the Autosub, Artemis, and Nereid Under-Ice vehicles, which have masses of 2.2, 1.5, and 2.2 tons, respectively). Each of the detachable sections of Icefin can be added or removed separately. This means that the whole vehicle does not need to be taken apart to address any failures or to change instrumentation parts. The small size and the modularity of the vehicle, which is robust to failures, also means that it can be transported easily in its separate sections and can be deployed in a straightforward manner by field staff, without the need for cranes or large oceanographic vessels. The modularity of the Icefin design also enables fast assembly times and a simple disassembly mode for use in the deep field. We can also develop multiple sensor bays to serve different science objectives. Separate science modules can be switched to increase the number of available sensors without increasing the size of the vehicle. Power modules can also be added or subtracted so that the vehicle can be customized for each specific mission. 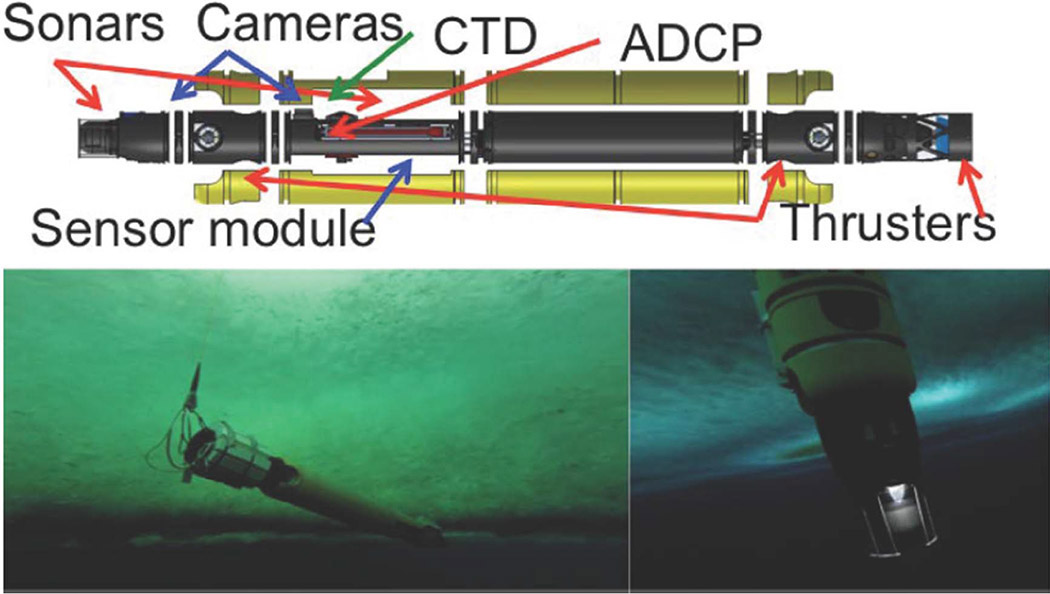 We have currently fitted Icefin with sensors for scientific analysis of the ice–ocean system. The sensor bay is equipped with a side scan sonar, a Doppler velocity logger (DVL) with current profiler, an altimeter, and a science imaging system. We are able to point the sensor bay downward for ocean floor mapping, or upward for topographical ice mapping. The forward module includes a forward-looking blazed array sonar, a conductivity, temperature, and depth sensor, as well as an obstacle avoidance camera. Our current GNC settings allow efficient collection of scientific data. We use the combination of an advanced fiber optic gyro inertial measurement unit, a compass, a DVL, an altimeter, and a pressure sensor for low-level motion control and high-level localization (see Figure 2). We have also included vehicle health sensors, such as those for leak detection and remaining power levels.

Icefin is rated for depths of up to 1500m, and has a 3mm-diameter Kevlar-reinforced fiber optic tether (3.5km in length and rated to 600lb) for communication, data retrieval, and emergency recovery purposes. We are able to increase the energy capacity of the vehicle by adding a separate battery module, which would facilitate longer operational activities and greater range capabilities. Our thruster design for the vehicle provides full holonomic control for five degrees of freedom, which enables vehicle movement with no protruding surfaces. We are thus easily able to control the vehicle's pitch, yaw, heave, and sway. Our thruster configuration provides a level of stabilization that is necessary to hover in the water for data and image collection campaigns (and hopefully for sampling purposes in the future).

We have designed a new small, lightweight, and modular AUV, known as Icefin. A prototype of this vehicle was deployed in Antarctica in 2014. Our current Icefin configuration provides improved geolocation, as well as feature awareness and tracking capabilities. We are thus able to achieve substantially better spatial resolutions for under-ice mapping, which is a key driver for ocean science in the polar regions. Our Icefin vehicle represents a major breakthrough for climate, planetary, and biological sciences, and maritime robotics. The scientific research it enables will yield important insights for our understanding of Earth and other Solar System bodies. In the future, we plan to incorporate an arm on the vehicle for sampling ocean floor soils and ice cores.

Icefin was commissioned using funds from the Georgia Institute of Technology and the School of Earth and Atmospheric Sciences, with additional contributions from the Georgia Tech Research Institute. Deployment of Icefin was funded through the National Science Foundation's SIMPLE program (project B259) and NASA grant NNX12AL65G. The authors thank Matt Meister, Catherine Edwards, and Jacob Buffo for their work on the SIMPLE project and their assistance in the field.

Michael West is a principal research engineer and currently conducts research related to unmanned underwater vehicles. He is the author of several technical publications within the fields of autonomous systems, underwater robotics, and underwater navigation and control.

Anthony Spears is a PhD candidate in the School of Electrical and Computer Engineering. His research is in the field of underwater robotics and computer vision, with a focus on autonomous navigation in featureless sub-ice environments.

Britney Schmidt is an associate professor. Her primary research interest is floating ice systems, both on Jupiter's moon Europa and within Earth's ice shelves. Her work provides a framework to remotely understand and to test hypotheses concerning planetary cryospheres.