Optical communication technology forms the platform for a variety of telecommunications, including broadband networks in offices, public institutions, and the home. Cloud services employ broadband optical networks and interconnects between servers and boards, such that you are now able to read an SPIE Newsroom article delivered over an optical network. Yet surprisingly, there is no commercially available all-optical memory (o-RAM) that stores or buffers 0/1 bit information as states of light.

Highly sophisticated technologies, such as multimode interference bistable lasers,1 micro-ring lasers,2 and vertical-cavity surface-emitting lasers,3 have enabled compact and low-power o-RAMs, but the footprint and power consumption of these devices are still problematic for practical applications. We have studied photonic crystal cavities (nanocavities)—in which light is strongly confined by a photonic bandgap—as a way of making wavelength-scale optical/optoelectronic devices. In 2012, we reported on random write/readout operations of o-RAMs at extremely low power (30nW),4 which showed the feasibility of nanocavity o-RAMs as ultra-compact and ultra-low-energy o-RAMs.

Our next goal is to show the feasibility of large-scale integration to meet the memory capacity (or bit number) requirements. Here, using serial integration together with wavelength division multiplexing (WDM)—combining signals using various wavelengths of light—we were able to simplify the configuration of the o-RAMs into a tandem nanocavity array with one common access waveguide: see Figure 1(a).5 We also changed the nanocavity from a mode-gap design4 to a three-missing-hole design (L3)6 compatible with WDM applications. Every L3 nanocavity has its own lattice constant (a) to set the cavity wavelength to a specific WDM channel. 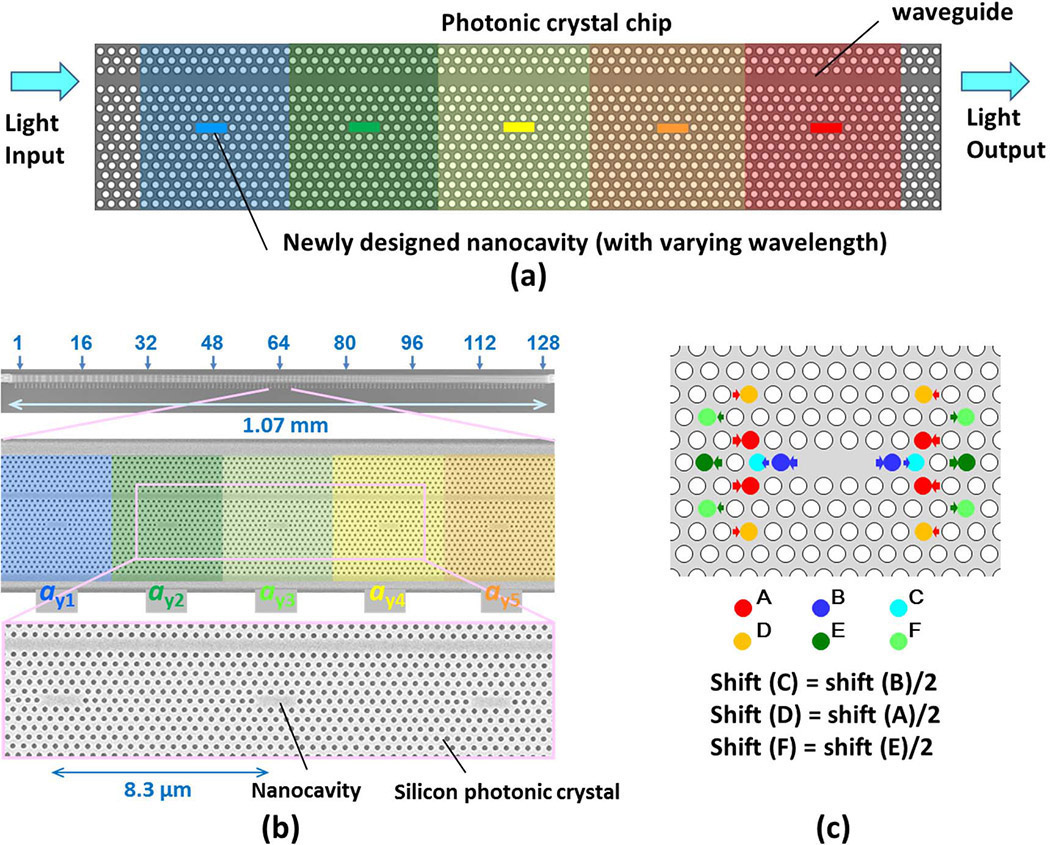 Figure 1. (a) Schematic design of the integrated all-optical memory (o-RAM) array. (b) Electron microscope images of a large-scale nanocavity array integrated in a silicon photonic crystal. ay: Hole spacing parallel to the array direction. (c) New systematic tuning design of a three-missing-hole nanocavity. A–F are the six sets of holes tuned to enhance the quality factor by more than 10 times.

The quality factor (Q) of the conventional L3 design was not sufficient for it to be compatible with dense WDM. Therefore, we developed a modified L3 nanocavity: see Figure 1(c), in which we systematically tuned six sets of holes, labeled A–F.5 This novel design allowed us to enhance Q by a factor of 10 relative to the conventional L3 cavities, without increasing the volume of the cavity mode. The enhanced Q made possible o-RAM operations with high 0/1 contrast, low power, long storage time, and dense channel spacing.

Figure 1(b) shows microscope images of integrated o-RAMs on a silicon photonic crystal chip.5 We integrated 128 L3 nanocavities with spacings of about 8μm. In the array, the hole spacing parallel to the array direction (ay) was varied from 408 to 424nm in steps of 0.125nm. High-resolution electron beam lithography has sufficient accuracy for such fabrication. We used 105 nanocavity modes as o-RAMs in the array. As shown in Figure 2(a), we could control cavity wavelengths in average steps of 0.23nm (30GHz). The total WDM bandwidth for the 105 integrated o-RAMs was 30nm. 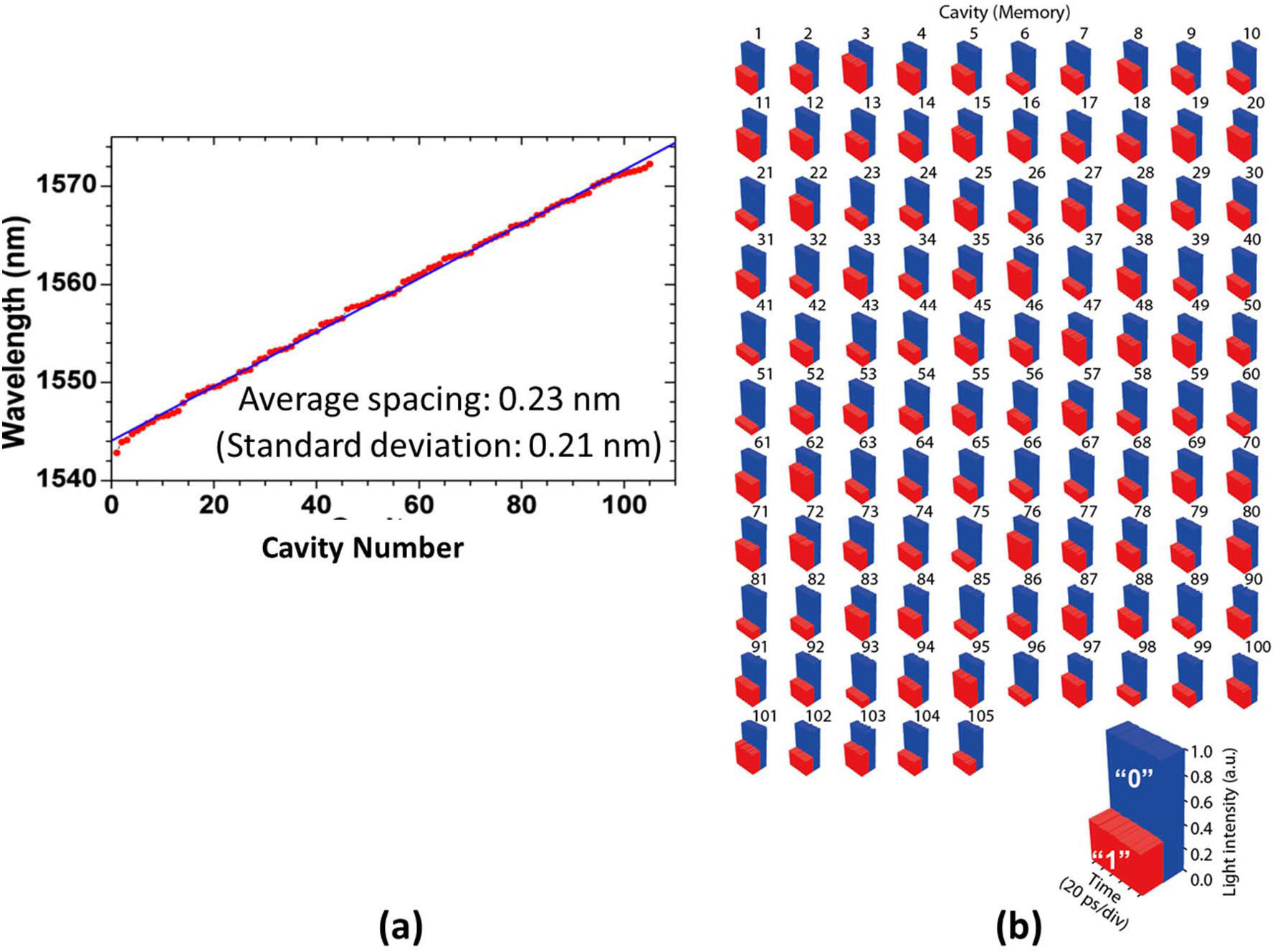 Figure 2. (a) Wavelengths for the 105 nanocavity modes. The blue line is a fitted line, and s is the standard deviation of the residuals from the fitted line. (b) Temporal outputs from all 105 bit memories when 0 or 1 information was written. a.u.: Arbitrary units.

We exploited the nanocavity modes as o-RAMs as follows. We used carrier-plasma bistable states as 0 and 1 states. Under bias light with a suitable negative detuning, it is possible to switch the two bistable states using short set/reset optical pulses. The output signal from the common waveguide side coupled to the o-RAMs switches to the low state (1) when the bias light is dropped to the o-RAM (ON), and to the high state (0) when bias light passes through the waveguide (OFF). Thanks to the high Q value (loaded Q of about 105) and very small mode volume of < 1 (λ/n)3, we achieved bistable memory operation of all 105 o-RAMs with fairly high 0/1 contrast: see Figure 2(b).

In summary, we have for the first time fabricated and operated a more-than-100-bit on-chip integrated optical memory using a photonic crystal platform.5 Thanks to state-of-the-art nanophotonics, a large-capacity, all-optical memory with acceptable power consumption is now viable. In the future, it will be possible to integrate ultra-low-power photonic crystal lasers, switches, and photodetectors with o-RAMs to make on-chip optical interconnects and all-optical routers. This is the focus of our ongoing work.

We would like to thank H. Taniyama, H. Sumikura, K. Takeda, T. Sato, and S. Matsuo for their cooperation in the study.

Eiichi Kuramochi received his BE, ME, and PhD in electrical engineering from Waseda University, Tokyo, in 1989, 1991, and 2004, respectively. In 1991 he began researching semiconductor nanostructures for photonic devices. Since 1998, his focus has been on photonic crystals.

Kengo Nozaki received his BE, ME, and PhD in electrical and computer engineering from Yokohama National University in 2003, 2005, and 2008, respectively. His work since 2008 has focused on researching ultrasmall optical devices based on photonic crystals and related nanostructures.

Akihiko Shinya received his BE, ME, and PhD in electrical engineering from Tokushima University in 1994, 1996, and 1999, respectively. Since 1999 he has been engaged in research on photonic crystal nanodevices.

Masaya Notomi received his BE, ME, and PhD in applied physics from the University of Tokyo in 1986, 1988, and 1997, respectively. Since 1988, his research interest has been photonic nanostructures for novel devices. He holds the title of senior distinguished scientist and is director of the Nanophotonics Center, leading the photonic nanostructure research group. He is a guest professor of physics at Tokyo Institute of Technology, and has been a fellow of IEEE since 2013.