A fractal analysis based on the Hurst exponent and performed on satellite images can measure changes on the Earth's surface.
16 June 2015
Juan Carlos Valdiviezo and Anna Carbone

Complex systems, like biological organisms, social organizations, and natural and man-made structures, may be evaluated by observing a relevant variable over a certain temporal or spatial range, which can be represented as 1D long-range correlated sequences or high-dimensional arrays. The most relevant features of such systems obey self-similarity laws and fractal-like behavior. In our research, we aim to obtain meaningful indicators for assessing ecosystem organization, dynamics, stability, and functions of fundamental relevance to the sustainable management of natural resources. For this purpose, we make use of the Hurst exponent to identify characteristic patterns and quantify the structure and dynamics of image sets acquired by the Landsat Thematic Mapper (TM) Earth-observing sensor in different locations around the world.

The Hurst exponent H describes long-term time and/or space memory in 1D sequences or high-dimensional arrays. It quantifies the tendency of a correlated variable to regress to the mean or to cluster in a specific direction. The Hurst exponent can take values between 0 and 1, indicating positive correlation, uncorrelation, and anti-correlation for values H>0.5, H=0.5, and H<0.5, respectively. The estimation of H has been exploited in a variety of fields, including climate, genomics, and financial markets.

In previous work, Carbone and coworkers proposed an algorithm to estimate the Hurst exponent of high-dimensional fractals using an analysis based on detrending moving average (DMA), a technique used to quantify the long-range correlations of fractal surfaces.1–3 Given an N×M image (2D array), the method makes use of a moving average window of varying size n×m, which computes the average value among adjacent pixels along the image. By varying n, m from 2 to the maximum values nmax, mmax, satisfying nmax≪N and mmax≪M, the method produces different subarrays. For each subarray, we can compute the corresponding value of the generalized variance σDMA2 as the difference between the original and the average images. The variance obtained at each subarray is then plotted as a function of |n×m|=s on a log-log plot. The slope of the regression line represents the H value.4

We used this algorithm to estimate the Hurst exponent to measure fractal changes from two image sets registered by the Landsat satellite, available through the US Geological Survey site.5 For our simulations, we selected two scenes of particular interest, which show changes over time in land use and water management. The first image set was recorded from the Elephant Butte Reservoir, located along the Rio Grande, in New Mexico. The site has seen declining water levels in the last 20 years, which has resulted in significant changes in the area's ecosystems (see Figure 1). Another area we studied is Mangystan Province in Kazakhstan, which is characterized by a growing infrastructure of oil and gas deposits. Since 1990 many derricks and other production facilities have been constructed in the desert. During the last few years the scenario has been strongly modified, with problems related to the quality and availability of fresh water appearing. 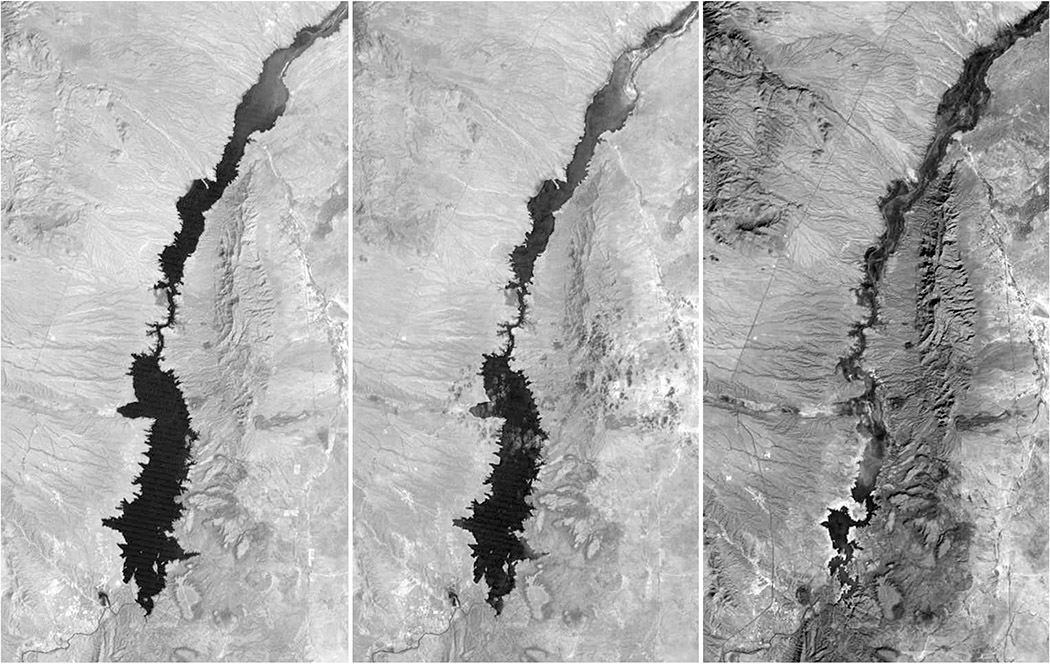 The original Landsat images we worked with are shifted and sloping due to the repeated cycle of the satellite around the Earth. To quantify the changes of a specific area under study, we implemented a pre-processing step to extract the same region from the imagery. The location of a specific region was determined according to the latitude and longitude coordinates of the image corners.4 We then applied our algorithm to the grayscale version of each subimage in each sequence of the two geographical areas under investigation. Further, for each subimage, we estimated the generalized variance by applying square-moving-average windows of varying sizes n×n, where n∊{7, 11, …, 256}. We emphasize that the moving-average window is similar to a low-pass filter of varying bandwidth applied to the image. The slope of the regression line in each case allowed us to estimate the H value. 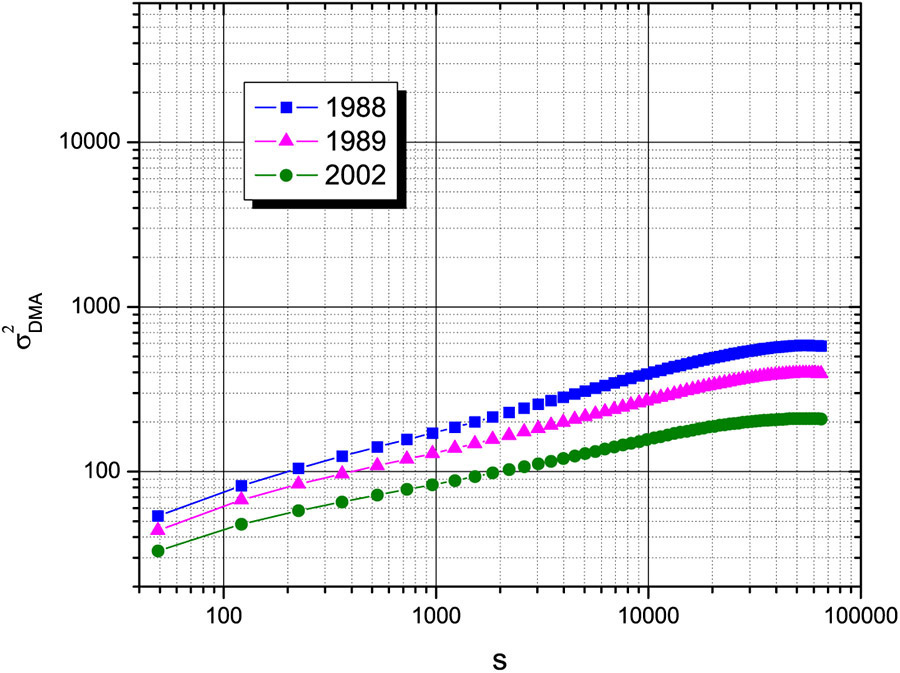 Figure 2. Log-log plot of the generalized variance σDMA2(obtained as the difference between the original and average images) with respect to s=|n×n|, for images taken in 1988, 1989, and 2002 in the Elephant Butte Reservoir. The average images were obtained with a moving window of size n×n, where n∊{7, 11, …, 256}.
Table 1.Hurst exponent values estimated from Landsat imagery registered at the Elephant Butte Reservoir in the period between 1988 and 2012. 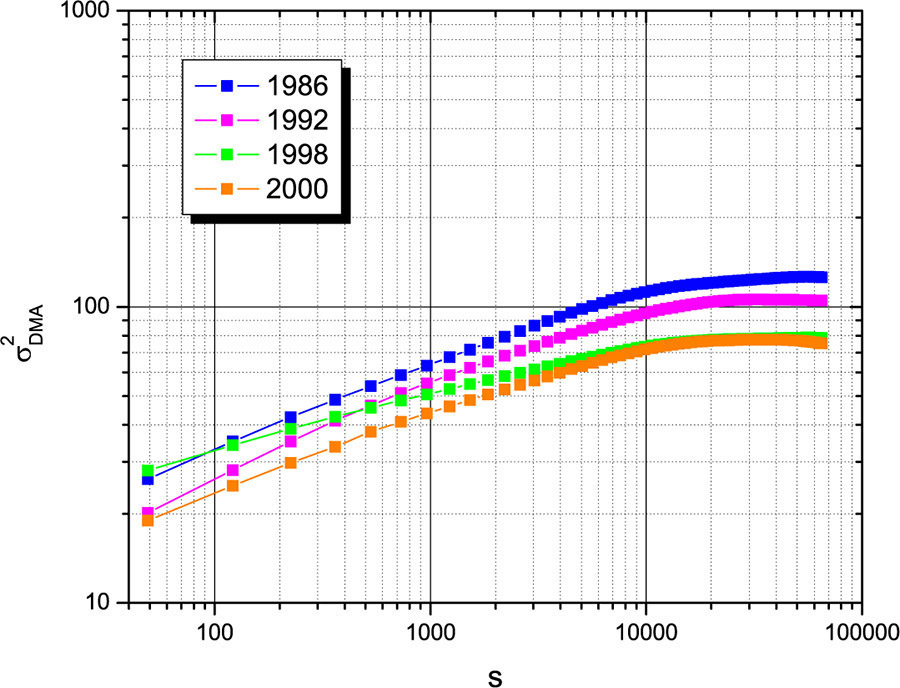 Figure 3. Log-log plot of σDMA2 with respect to s=|n×n| for images captured between 1986 and 2000 in Mangystan Province, Kazakhstan.
Table 2.Hurst exponent values estimated from Landsat imagery registered at the Mangystan site in the period between 1985 and 2011.

The decreasing values of the Hurst exponent for both image sequences are directly linked to changes in the environmental conditions of the areas under study. We conclude that the H value decreases as a function of time as human exploitation of the area increases. In fact, these results show a strong relation between the fractal dimension of the Earth's surface and changes over the passage of time. If we think of the Earth as a complex system, we could infer that such a system is losing complexity.

While changes in the ecosystems can be appreciated by directly observing the evolution of the natural structure in the Landsat imagery, it is still useful to perform the computationally complex Hurst exponent analysis. By estimating the correlation exponents, we can put forward general models of the dynamics of the biological natural ecosystem and provide deeper insights into the phenomena underlying the ecosystem transformation itself. Future work contemplates the application of the DMA algorithm for vegetation monitoring from hyperspectral imagery.

Anna Carbone is a researcher at the Applied Science and Technology Department. She is the author of several papers in the areas of stochastic processes, statistical mechanics, and complex systems.