Annual composite images from Formosat-2 have been used to generate a long-term and detailed landslide inventory for Taiwan.
27 May 2015
Cheng-Chien Liu, Ming-Hsun Ko, Yi-Ting Lin, Chung-Shiou Huang and Chen-Yu Chen

Landslides are destructive and rapid geological processes that pose a direct threat to human lives and can cause enormous damage to settlements, roads, infrastructure, and other valuable resources.1 Landslide inventory and susceptibility maps—among various landslide mitigation strategies—are critically needed in landslide-prone regions.2 These maps must be sufficiently detailed to support mitigation action at the local level. Long-term and detailed landslide inventories are required to provide a better understanding of the dynamic changes associated with landslides, to evaluate various preparatory factors, to make a sound assessment of landslide risks, and to provide ‘nowcasts’ (i.e., short-term forecasts) of landslide hazards.

Such long-term and detailed landslide inventories, however, are not yet available for most parts of the world. This is because they must meet at least three prerequisites. The region must experience frequent occurrences of landslides, it must be observed intensely by satellites, and there must be a rapid—yet accurate—approach to distinguish between landslide and shadowed areas within images of the region. Taiwan is one of the places on Earth most vulnerable to natural hazards. More than 90% of the country's population live in areas that are at a relatively high risk of death caused by landslides.3 Taiwan's government is therefore exploring several ways to manage and mitigate the problems that can be caused by landslides.

As part of a five-year project, we are using Formosat-2 imagery to assess and interpret landslides that have occurred in Taiwan after natural disasters.4 Formosat-2 is a National Space Organization Earth observation satellite. It has a unique orbit configuration that enables acquisition of high-spatial-resolution imagery on a daily basis.5 Formosat-2 has been used to acquire images for more than 40 million km2 of Taiwan's area over the past 10 years. This data likely represents the most intensive observation from space for a country with such frequent occurrences of landslides. We previously demonstrated the potential of Formosat-2 images (e.g., those shown in Figure 1) for monitoring the spatial and temporal variations of landslides, especially over Taiwan's area.6 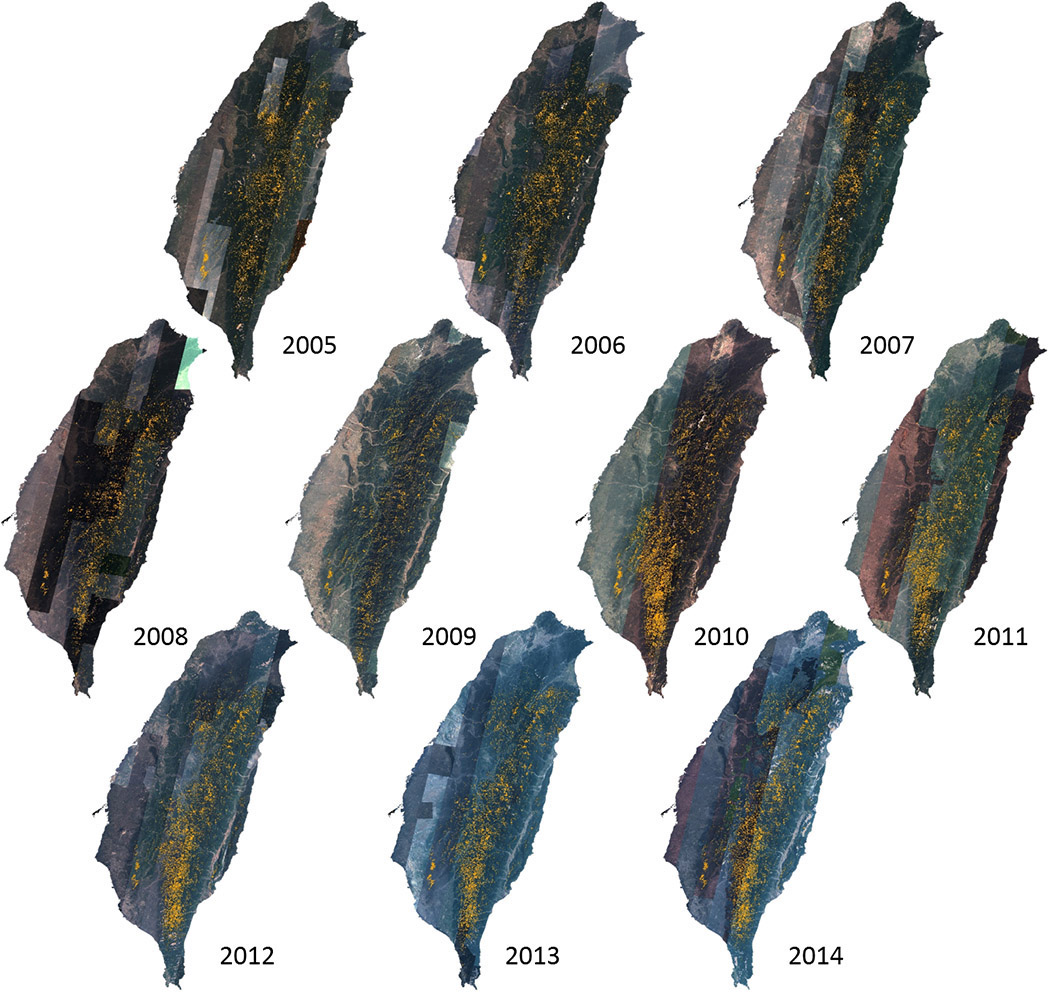 Figure 1. Annual composite of Formosat-2 images that were acquired between 2005 and 2014.

Our recent work (supported by the Forest Bureau of Taiwan) on the development of the Expert Landslide and Shaded Area Delineation System (ELSADS) allows us to integrate all useful spatial information from the Formosat-2 images.7 We also use ELSADS to help us determine those areas that have experienced landslides and those that are shaded parts of the images. We use two spectral indices (the normalized difference vegetation index and the normalized green–red difference index) and the first principal component of the panchromatic band to automatically determine the regional thresholds of non-vegetation and dark areas. We can overlay these boundaries on locally enhanced images and a digital topography model (see Figure 2) so that we can inspect each area closely with a preferred viewing direction. We are also able to switch the other geospatial information on or off to facilitate interpretation. We used an inventory of manually delineated landslide and shadow areas in 25cm-resolution aerial photographs (from a single day) to validate ELSADS. We have proven that this system is as accurate as the general manual delineation and visual interpretation approach, yet it is significantly quicker. 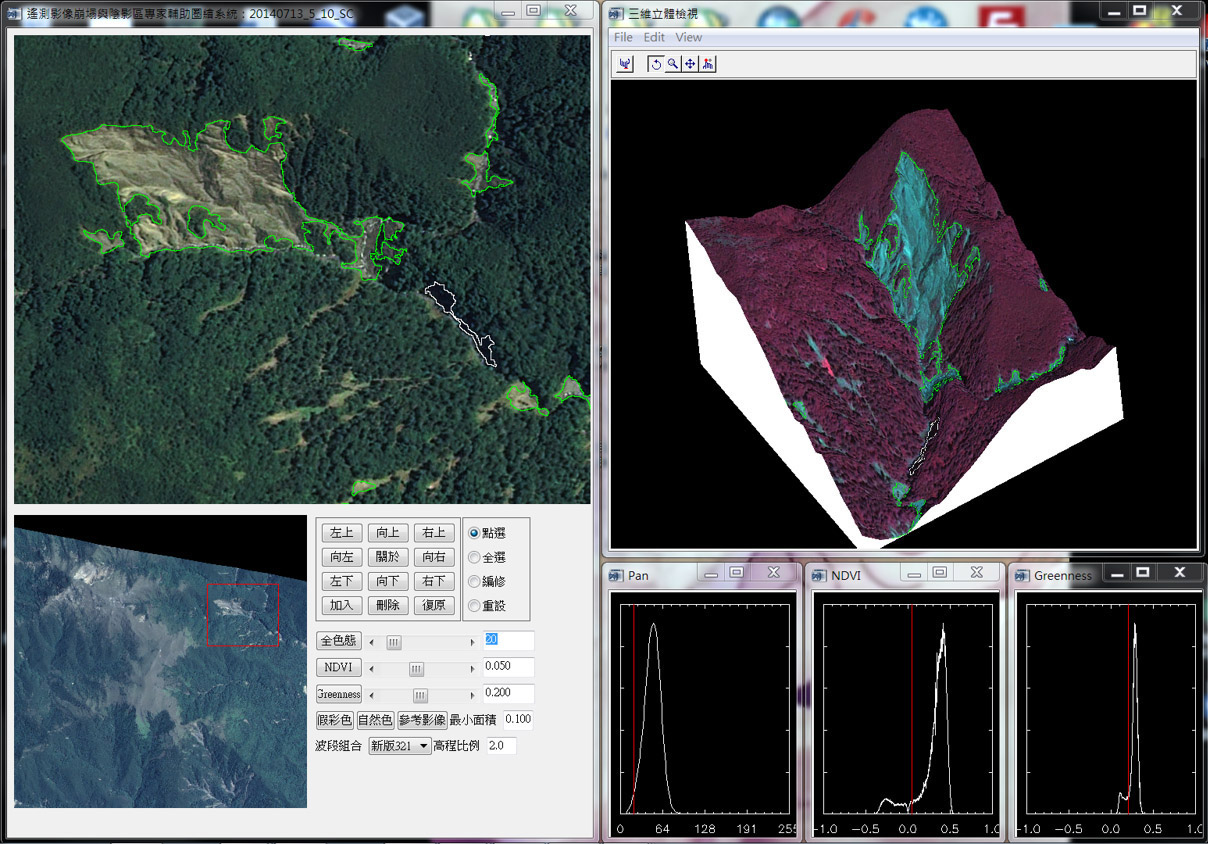 Using annual composite Formosat-2 images acquired between 2005 and 2014, we have used ELSADS to generate a long-term and detailed landslide inventory for the entire Taiwan region. Based on this inventory, we have made several efforts to develop a nowcast system of landslide hazards. Such efforts include establishing a model for a landslide susceptibility index,8 introducing landslide total flux as a new preparatory factor for the model,9 and optimizing the weight of each preparatory factor.10 We have also calculated the landslide hazard index (LHI) using the precipitation nowcast of the Ensemble-based Typhoon Quantitative Precipitation Forecast System (ETQPFS) as the triggering factor. We then evaluated the performance of our model against the actual outcome of the landslide. With our system, we made a new analysis of the debris flow that occurred in He-Jung village in 2012, and achieved an accuracy of up to 69%.10

We have operated ELSADS since the typhoon season of 2014, and our goal has been to provide nowcasts of landslide hazards. Typhoon Fung-Wong made landfall over the southeastern part of Taiwan on 21 September 2014. We issued a three-hour landslide nowcast for Jialan village, in Jinfeng township, at 17:00 on 21 September 2014 (see Figure 3). Although the ETQPFS precipitation nowcast deviated substantially from the actual precipitation, our landslide nowcast matched well with the actual landslide areas that we interpreted from the Formosat-2 images obtained on 22 September 2014 (see Figure 3).

Figure 3. Left: Example of a landslide hazard nowcast for Jialan village in Jinfeng township during typhoon Fung-Wong. This three-hour nowcast was issued at 17:00 on 21 September 2014. Right: Actual landslide areas (marked in red) that were interpreted from Formosat-2 images obtained on 22 September 2014.

Cheng-Chien Liu is a Distinguished Professor in the Department of Earth Sciences. As the director of GEODAC, his work involves the development and application of multi-stage platform remote sensing techniques for observing the global environment at crucial moments and places.