Beyond the Shockley-Queisser limit with singlet exciton fission

The power conversion efficiency of conventional single-junction photovoltaics is fundamentally restricted by the Shockley-Queisser limit. This limit mainly arises due to an inability to efficiently harvest the full-sun spectrum. In a semiconductor, excitations generated from the absorption of high-energy photons rapidly lose their vibrational energy at the semiconductor band edge. As a result, most of the energy from blue-wavelength solar emission is wasted to heat. For over 50 years, scientists have sought ways to overcome the Shockley-Queisser limit, with the aim of designing practical and economically viable solar cells.1

One way to overcome this limit is by exploiting the unique properties of organic semiconductors. In this class of materials, it is possible to redistribute the energy from one highly energetic excitation into two excitations, each with half of the original energy. This means that instead of losing the extra energy as heat, the photocurrent from blue light can be doubled. In a semiconductor, the absorption of a photon raises an electron into an energetically excited state, leaving a positively charged hole behind. Unlike in crystalline inorganic semiconductors, excited electrons and oppositely charged holes are tightly bound in low-dielectric organic semiconductors, forming a quasiparticle known as a Frenkel exciton.

Depending on a quantum mechanical property of the electron and hole (their spin), two kinds of these excitons can be created: spin singlets and spin triplets. The absorption of light produces spin-singlet excitons. In some organic semiconductors, this spin-singlet exciton spontaneously splits into two spin-triplet excitons in a process known as exciton fission. Although this process has been recognized since the late 1960s,2 it has only recently begun to receive wide attention due to its potential use in photovoltaics. By combining a high-bandgap singlet-exciton-fission material with a low-bandgap semiconductor, the Shockley-Queisser limit for the power-conversion efficiency rises from around 32 to 46%. This increase occurs because we are able to better use the blue part of the solar spectrum. Figure 1 illustrates the photocurrent contribution of an organic fission layer combined with silicon. 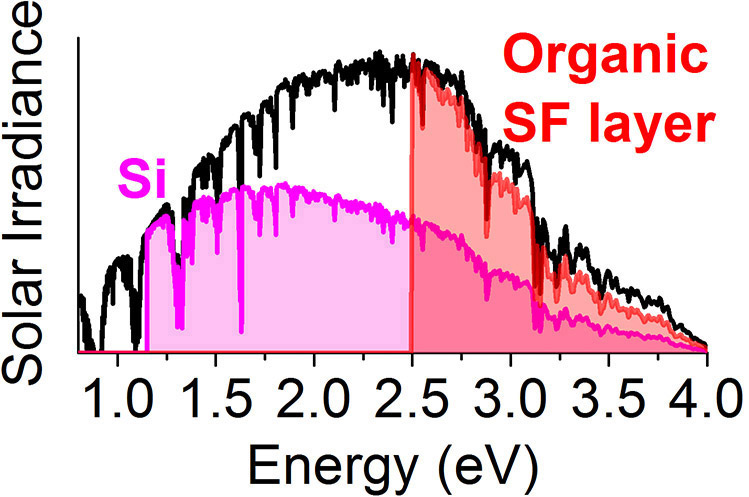 Figure 1. Conventional solar cells lose most blue-wavelength radiative energy from sunlight to heat. An organic singlet fission (SF) layer can double the photocurrent from blue light when combined with conventional low-bandgap semiconductors such as silicon (Si).

Two key challenges stand in the way of leveraging this effect in practical devices. First, the underlying quantum mechanics controlling singlet fission are unclear, which hinders the design of new materials that could make use of the effect. Second, once formed, the energy of the triplet excitons must somehow be captured. Fortunately, there has been significant progress on both fronts.

Due to advances in ultrafast laser spectroscopy over the past few years, it has become possible to observe the singlet fission process in real time. We discovered that in a model system (pentacene), the singlet exciton undergoes fission in just 80fs, giving rise to two triplets for each photon absorbed (see Figure 2).1Spectroscopy has also provided data for theoretical models that link the structures and packing of the organic molecules to the rate and efficiency of fission.3 Most recently, advanced vibrational spectroscopy techniques have uncovered the way in which the vibrational motion of the molecules couples to the electronic states, driving the singlet fission process on an ultrafast (80fs) timescale and resulting in 200% efficiency.4 These studies have lead to significant insights into singlet fission and bring the goal of rationally designing singlet fission molecules further within reach. 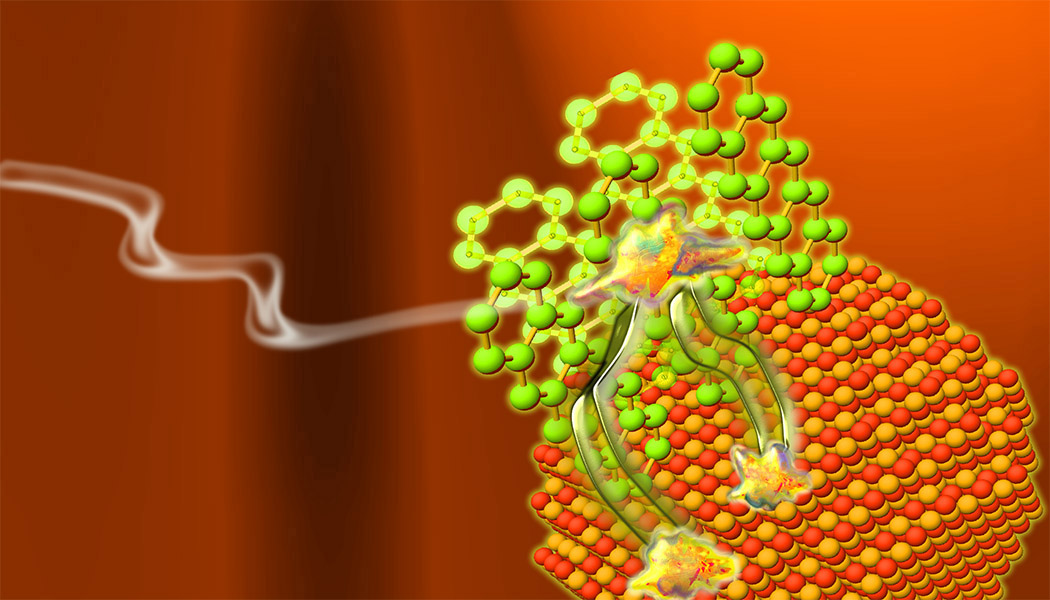 Figure 2. Artistic image depicting the absorption of a photon on a pentacene molecule, followed by singlet-exciton fission and triplet-exciton transfer onto a spherical nanocrystal. (Credit: Maxim Tabachnyk.)

However, an issue remains regarding what we can do with the non-emissive triplets that remain. Previous strategies have attempted to separate the charges of triplet excitons at material interfaces, causing external quantum efficiencies (extracted charge-carrier pairs per incident photon) of above 100% and internal quantum efficiencies (extracted charge-carrier pairs per absorbed photon) approaching 200%.5, 6 However, the power conversion efficiencies of these approaches have been rather small because an efficient low-bandgap electron acceptor has not yet been identified.

As illustrated in Figure 3, the ultimate goal of both approaches is to build a hybrid device in which the organic layer absorbs the blue part of the solar spectrum but is transparent to red light. The excitations in the organic material undergo singlet fission and the resultant triplet pairs are transferred to emissive nanocrystals, from which they can be directed into a conventional inorganic solar cell. For each absorbed blue photon, two electron-hole pairs are eventually generated in the underlying solar cell, doubling the photocurrent. 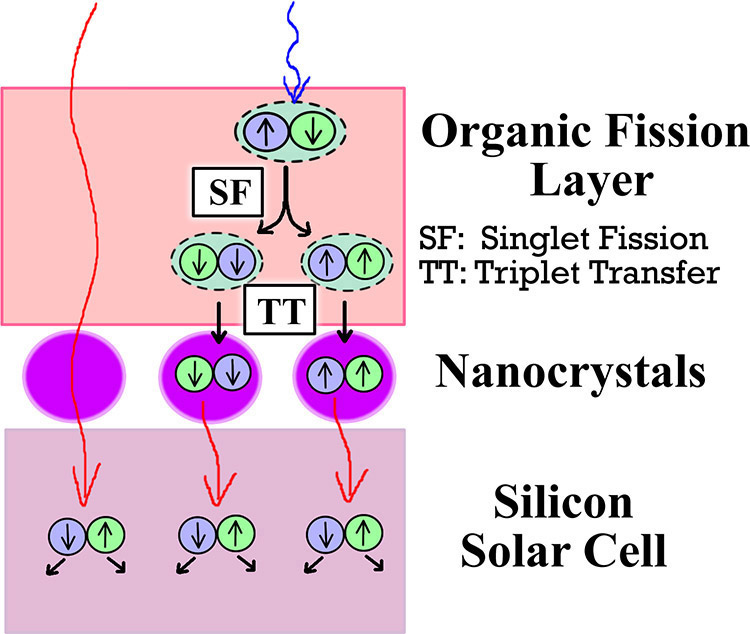 Figure 3. Our hybrid device, designed to boost the efficiency of silicon solar cells. An organic fission layer absorbs blue light but is transparent to red. Photoexcited singlet excitons fission into pairs of triplets, which are transferred into nanocrystals. From here, they are directed into a conventional inorganic solar cell. For each absorbed blue photon, two electron-hole pairs are eventually generated in the underlying solar cell, doubling the photocurrent that occurs as a result of blue-wavelength photons. The arrows on the charge carriers describe their spin state.

In summary, we have designed a hybrid photovoltaic device capable of using a wider range of the solar spectrum by doubling the photocurrent generated by blue light. The rapid progress made over the past five years, in both understanding the mechanism of singlet exciton fission and designing new nanostructures and devices to harvest the energy of triplet excitons, suggests that practical materials and devices that are able to fully exploit this phenomenon may be on the horizon. These developments could signal the end of the Shockley-Queisser limit. We are currently investigating ways in which the energy transfer of spin-triplet excitons can be extended to other hybrid/organic systems. We are also working on a cheap organic coating that could be used to increase the power-conversion efficiency of widely spread silicon solar cells.

This work is supported by the Engineering and Physical Sciences Research Council (EPSRC) of the UK and the Winton Programme for the Physics of Sustainability.

Maxim Tabachnyk is a PhD student, Gates Cambridge, Winton, and EPSRC Scholar in the optoelectronics group.

Andrew Musser is a research associate in the optoelectronics group.