The miniaturization and integration of chemical and biological devices with optical components has been a key driving force behind the development of multifunctional lab-on-chip microsystems. Optical sensors have also found many advantages in optical fibers that are deployed over a billion kilometers worldwide and serve as the backbone of our telecommunications network. The concept of developing ubiquitous sensing networks relies on a similar development of novel, miniaturized, and integrated in-fiber microsystems. To this end, advanced laser processing enables the development of a new optofluidic lab-in-fiber platform1 in which a very small volume (on the order of nanoliters) may be detected over widely distributed fiber-communication networks, or inside challenging environments like the human body. In this way, an all-fiber-based platform offers seamless integration into existing communication networks or biomedical probes that is otherwise not possible with more traditional lab-on-chip-based technologies.

Today, femtosecond laser direct-writing is a well-established technology in which nonlinear optical interactions result in highly precise and customizable refractive index or structural changes of controlled 3D shapes.3, 4 Here, we harness these phenomena to write optical taps that couple light into and out of the light-guiding core of single-mode optical fibers (SMFs) for probing optical sensors written in the surrounding fiber cladding. This enables novel sensing opportunities with fiber cladding photonics.2 We have introduced three traditional approaches to partially redirect light from the core waveguide into the laser-written cladding waveguide: an X-coupler that crosses the center waveguide at a discrete angle—see Figure 1(a)—an S-bend coupler that forms an ‘S’-shaped waveguide to emerge from the SMF core—see Figure 1(b)—and a directional coupler that runs offset and parallel with the SMF core: see Figure 1(c). These methods offer unprecedented flexibility in tuning the coupling ratio to values as high as 99%, as well as control over the spectral bandwidth and light polarization (see Table 1).2 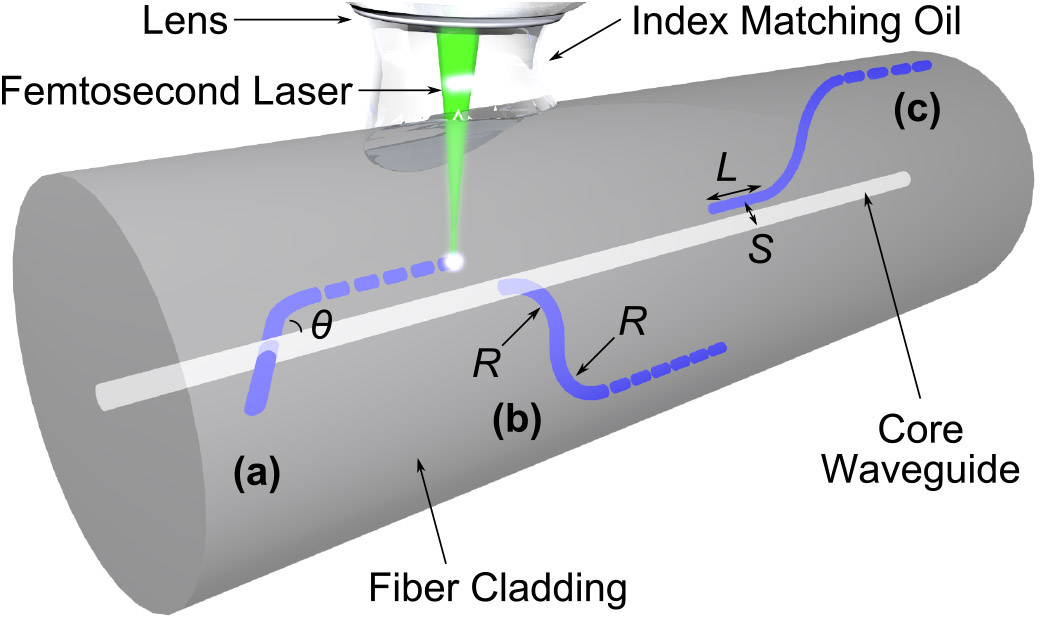 Figure 1. Femtosecond laser writing of waveguides by focusing through the index-matching oil to form an (a) X-coupler, (b) S-bend coupler, and (c) directional coupler connected with the core waveguide in a single-mode optical fiber (SMF). Here, θ is the crossing angle, R is the turning radius, S is the separation distance, and L is the straight length of the laser-formed couplers. (Reproduced with permission.2 Copyright 2015 Springer.)
Table 1.Telecom band (1250–1650nm) properties of in-fiber couplers formed in SMFs by femtosecond laser writing. (Reproduced with permission.2 Copyright 2015 Springer.)

Such optical couplers open a wide variety of new opportunities for developing photonic cladding sensing circuits in general types of glass fibers. For example, twisted cladding waveguides have been applied to create an in-fiber Mach–Zehnder interferometer and demonstrate unambiguous torsion sensing in an optical fiber for the first time.6 Here, we showcase the example of a distributed fiber-optic 3D shape and temperature sensor (see Figure 2) that was laser written in a single exposure step.5 We exploited the continuous and distortion-free writing capability made available by oil-immersion focusing into buffer-stripped SMFs2 to distribute nine different Bragg-grating waveguides (BGWs) along three parallel waveguide tracks and interconnected via a 1×3 directional coupler based on S-bends to a fused SMF. The instantaneous 3D fiber shape is inferred from differential shifts in the nine BGW wavelengths when monitored with a spectrometer.7 In this example, we designed the center waveguide for minimal sensitivity to bend-induced strain, thereby permitting the simultaneous measurement of the temperature profile along the fiber.8 Such a free-standing, flexible, compact, and lightweight device is attractive in a wide range of applications, including the guidance of drug delivery, biomedical catheters, and other instruments used in minimally invasive surgeries. 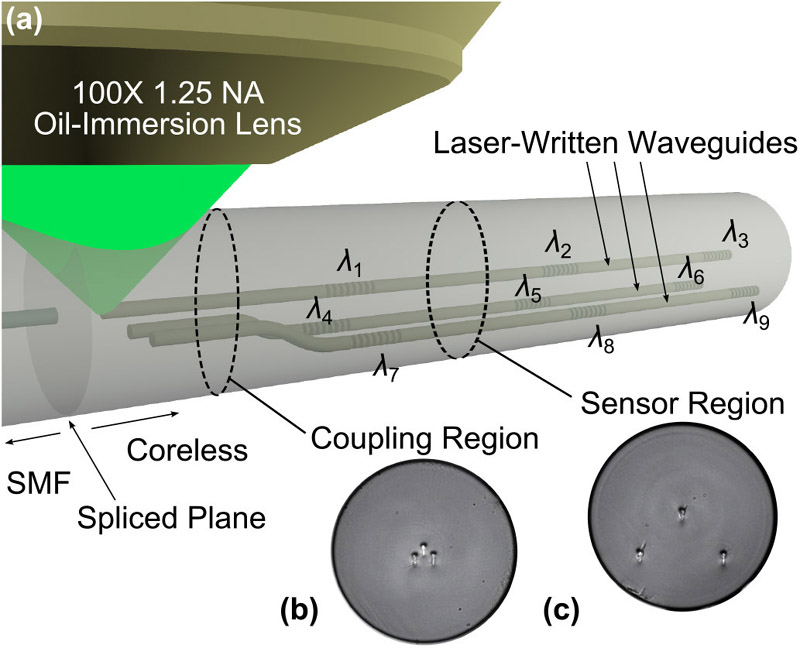 Figure 2. (a) Schematic of a 3D distributed fiber shape and thermal sensor written in coreless fused silica fiber, where λ1 to λ9 represent nine different resonant wavelengths for Bragg-grating waveguides distributed along three laser-written and parallel waveguide tracks. Micrographs of the fiber cross section (125μm diameter) at the (b) coupling and (c) sensor regions show the arrangement of the internal laser-written waveguides. (Reproduced with permission.5 Copyright 2013 The Optical Society.)

Our approach has also exploited selective hydrofluoric acid etching of laser-modification tracks to enable precise 3D structuring anywhere inside an optical fiber. We introduced microfluidic components and optical resonator cavities around the guiding core waveguide, as well as into laser-structured fiber cladding optical circuits. In this way, existing fiber-optic technology can be elevated into new types of fiber optofluidic sensors based on this 3D integration of cladding photonics, microfluidics, and optical resonators that efficiently connect with the core waveguide. Figure 3 shows a schematic and optical micrographs of a multifunctional fiber sensor that multiplexes sensing elements of a Fabry–Pérot resonator, a Bragg grating, and a total internal reflection tapping mirror, all embedded within a coreless optical fiber. We spliced this compact lab-in-fiber to SMF for real-time sensing of temperature, axial strain, bending strain, gas pressure, fluid or gas refractive index, and analyte fluorescence.1 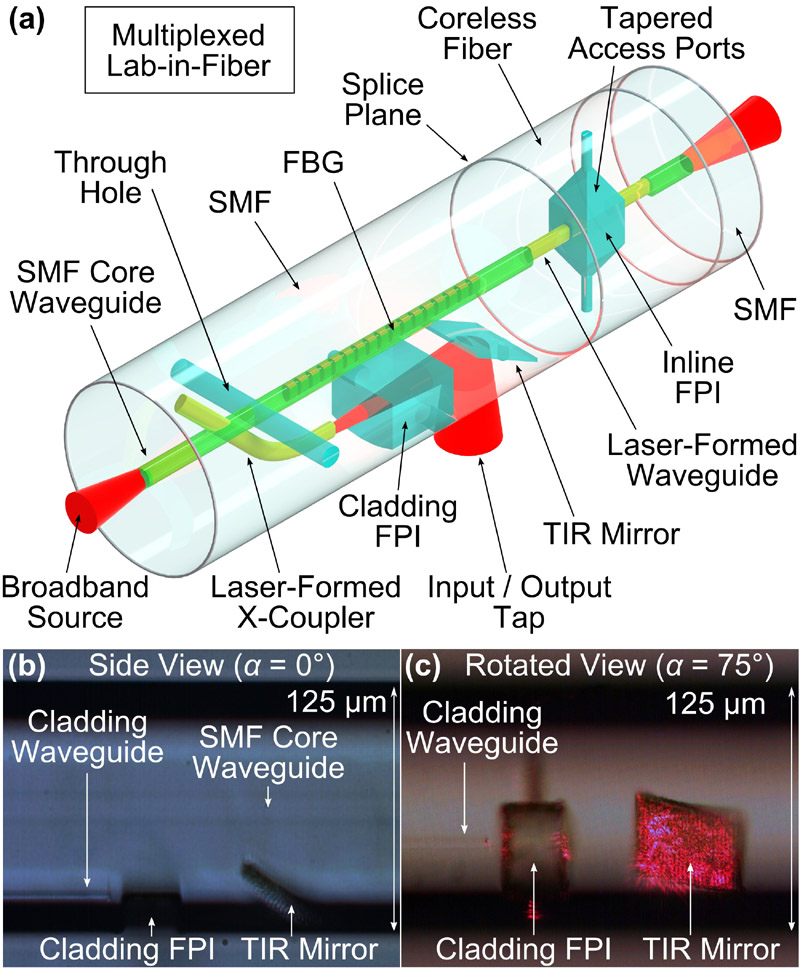 Figure 3. (a) Schematic and (b, c) optical micrographs of a multiplexed lab-in-fiber integrating a through hole for fluorescence detection or absorption spectroscopy, a fiber Bragg grating (FBG) for temperature or strain detection, an inline Fabry–Pérot interferometer (FPI) for refractive index or pressure sensing, and an X-coupler tap and laser-formed waveguide for probing a cladding FPI for refractive index, pressure, or bend sensing. Total internal reflecting (TIR) mirrors are used to tap light either into or out of the fiber cladding for an alternative probing method. (Reproduced with permission.1 Copyright 2014 The Royal Society of Chemistry.)

The overall approach of 3D laser structuring in optical fibers extends to many more application directions, including through and blind holes, microfluidic networks and reservoirs, micro-optics, in-line BGW filters, birefringence tuning, interferometers, and polarization-selective taps.1, 2 Thus, femtosecond laser writing offers a new and attractive opportunity for the dense 3D integration of optical sensors within many general types of optical fibers. This has remarkable advantages for greatly enhancing the functionality of such fibers and paves the way for powerful new research tools, commercial products, and biomedical devices. Future work will exploit 3D fiber shape-sensing capabilities for catheter guidance and optical-coherence-tomography probing devices in the human body, develop analyte-specific sensors into fibers for monitoring oil and gas exploration systems and water supplies, and use chemical etching to construct nanoholes for the study of bacteria and DNA.

Moez Haque is a postdoctoral fellow developing novel lab-in-fiber sensors. He earned his BSc (Hons) in applied physics in 2008, and his MASc and PhD in electrical and computer engineering at the University of Toronto in 2011 and 2014, respectively. He is an early career professional member of SPIE.

Jason R. Grenier is a doctoral candidate developing ultrafast laser writing of optical cladding photonic circuits. He was the founding president of the SPIE student chapter at the University of Toronto (2009–2012) and the inaugural chair of the SPIE Future Leaders Ad Hoc Committee (2011–2013).

Kenneth K. C. Lee received his PhD in 2015. His work focuses on using femtosecond-laser direct-writing techniques to improve the speed performance of a polymer-based microactuator and to fabricate novel compact fiber-optic sensors.

Luís A. Fernandes is a senior scientist at OZ Optics Ltd., leading research and development in femtosecond laser direct-writing of in-fiber optical devices. He has a PhD in physics (2012) from the University of Porto, and he was a postdoctoral fellow at the Photonics Group of the University of Toronto in 2013.

Peter R. Herman is a full professor, leading research to control and harvest ultrafast laser interactions for nanofabrication of lightwave circuits, optofluidic devices, and smart-fiber microsystems. He is a fellow of The Optical Society and has published over 300 scientific papers. He has contributed over 50 presentations at SPIE meetings, and served as co-chair of Photonics West LASE (2008–2011) and two additional conferences. He is a member of various SPIE conference committees and advisor to the SPIE student chapter at the University of Toronto.