Rare earth (RE)-doped yttrium aluminum garnet (YAG) is the most widely used active medium for solid-state lasers. Scientists are particularly interested in using RE-doped YAG to fabricate crystalline fibers, which have high power scalability compared to their glass counterparts.1 However, current fiber growth (or pulling) techniques, such as laser-heated pedestal growth2, 3 and micro-pulling-down,4 have not successfully produced low-loss, double-clad, or even single-clad fully crystalline fibers. To overcome these fabrication problems and still exploit the advantages of crystalline fibers over glass, we have developed a method for producing true crystalline fiber waveguides (CFWs) from YAG and other similarly structured materials using adhesive-free bond (AFB) technology.5–8 Compared with the crystalline fiber-pulling methods, our approach enables fabrication of an all-crystal fiber structure from core to outer claddings.

In principle, an RE-doped YAG crystalline fiber laser needs to be only a fraction the length of a conventional glass fiber laser due to its much greater thermal conductivity and emission cross section (both are about one order of magnitude higher than for glass). Therefore, it is possible to use straight crystalline fibers of up to tens of centimeters long for most laser applications. We need not be concerned with the fiber bending loss that affects glass fiber lasers. Therefore, it is possible to significantly increase fiber core size while maintaining single-mode laser operation by precisely controlling the fiber numerical aperture. Experiments6 show that it is possible to achieve a single-mode laser in a 41mm-long single-clad erbium (Er)-doped YAG CFW with core cross section >60×60μm longitudinally core-pumped at 1.532μm. Furthermore, developers have achieved a nearly quantum defect-limited efficiency (92.8%) at laser wavelengths of 1.617 and 1.645μm. The maximum output power of 9.1W is limited by the available pump power.

In more recent work,8 we have demonstrated the first laser diode (LD) cladding-pumped single-mode laser in a double-clad ytterbium (Yb)-doped YAG CFW with a near diffraction-limited beam quality. The CFW is 65mm long (see Figure 1), and consists of a single-crystal Yb-doped YAG square core with molar doping concentration of 1% and a 100 × 100μm undoped YAG inner cladding. The outer cladding is ceramic spinel. 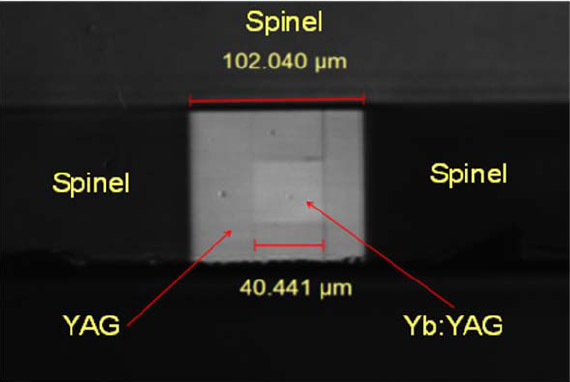 We cladding-pumped the CFW using a fiber-coupled diode laser at 938nm wavelength. First we demonstrated laser output at 1.03μm with the uncoated waveguide ends at pump power of 2.7W. The estimated small signal gain coefficient in this case is gl >5, which is much larger than in any bulk lasers. The total laser power that includes both forward and backward output powers is 8.5W at an input pump power of 39.5W (see Figure 2), which corresponds to an optical-to-optical efficiency of 21.5%. After attaching an input coupler (R>99.9% at 1030nm) and an output laser coupler (R=47% at 1030nm) on the two CFW ends with fluorinated oil, we reduced the laser threshold to below 0.54W, and the maximum output power increased to 13.2W (see Figure 2). The low laser threshold means that the laser optical-to-optical efficiency and the slope efficiency are both around 33.4%. 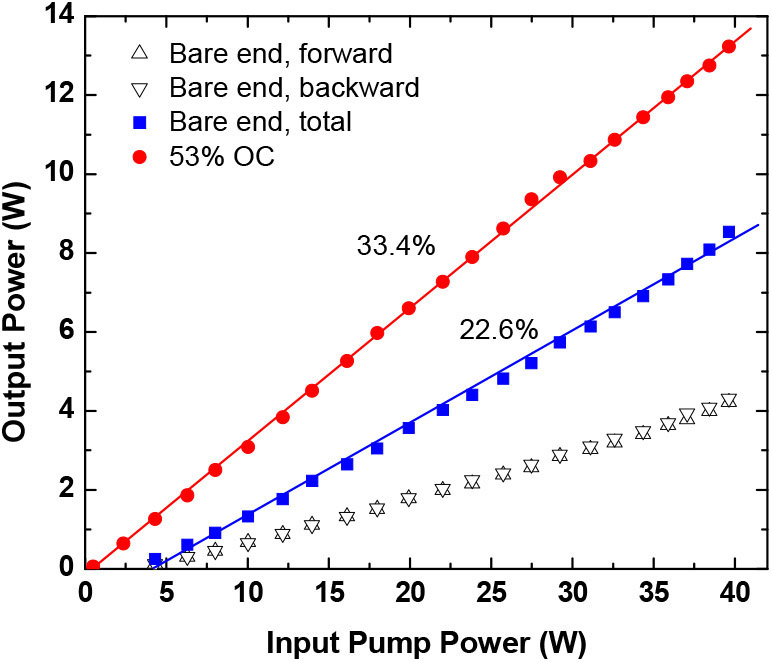 Figure 2. Laser output power as a function of pump power. The upward and downward open triangles and the solid squares are the measured forward, backward, and total laser power from the uncoated CFW ends, respectively. The solid circles are the laser power after the input and output couplers are attached on the CFW ends.

We measured the near-field 2D and 3D laser beam profiles using a pyroelectric camera (see Figure 3) at the image plane of a 10× microscope objective. Even though the waveguide has a square core, the mode still appears circular, with a measured roundness of 94%. We analyzed the beam quality by the knife-edge method9 (see Figure 4). The fitted M2 (the ratio of the actual focused beam size to that of an ideal Gaussian beam) is ∼1.02, which shows a pure single-mode laser in the 40×40μm core CFW.

Figure 3. 2D and 3D laser beam profiles of the double-clad CFW laser. The measured mode profile has near-perfect Gaussian distribution with mode diameter of 44μm at the point of 1/e2 of the peak intensity. 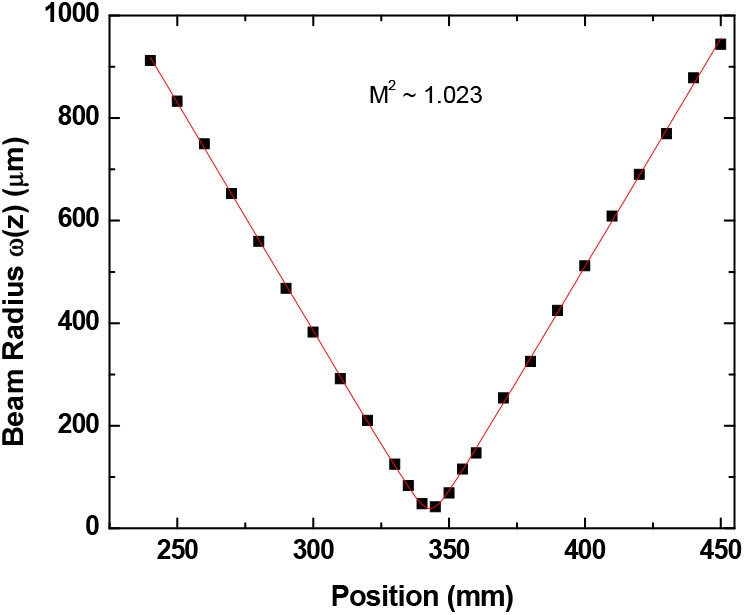 Figure 4. Beam radius of the Yb:YAG CFW laser as a function of position measured using a 200mm focus lens. M2: Ratio of focused actual beam size to that of an ideal Gaussian beam. ω(Z): Beam radius.

In conclusion, we have realized single-mode CFWs with large core size in a variety of RE-doped YAG crystals using AFB technology, and demonstrated the first LD cladding-pumped single-mode laser in a double-clad Yb:YAG fiber waveguide with near-diffraction-limited beam quality. We expect that the CFW will significantly suppress the stimulated Brillouin scattering due to its large core size, short fiber length, and low Brillouin gain coefficient. Our future work will focus on high pulse energy power amplification in CFWs.

Xiaodong Mu received a PhD from the State Key Laboratory of Crystal Materials, Shandong University, China, in 1995. He is currently a technical staff member, conducting research on nonlinear optics and lasers.