In remote sensing contexts, the atmosphere is normally reduced to small imaginary ideal cubes that are referred to as probe volumes. The properties of these probe volumes can be described by backscatter, extinction, depolarization, Raman, or fluorescence coefficients for any wavelength within the given atmospheric window. Monitoring and profiling of atmospheric aerosols1, 2 and gaseous constituents3,4 are conventionally conducted using laser radar (lidar) remote sensing techniques. Recently, however, another atmospheric constituent—known as aero-fauna—has also been monitored.5–9 There are several million of these species, which transit aerospace, and it is a substantial challenge to achieve species specificity in these sensing activities.

Fast sensors and rapid sampling (in the kilohertz range) are key to detecting and classifying atmospheric fauna. Insect wings beat at a variety of frequencies, ranging up to 1kHz (2kHz sampling is thus required to resolve this beat frequency). Up to 18 harmonic overtones (limited by the bandwidth of the instrumentation) have also been observed,10 and the overtone spectrum can be used for species classification purposes (see Figure 1).11,12 The low temporal resolution capabilities of conventional atmospheric lidar instruments, however, are insufficient for detecting aero-fauna. Considerable efforts have therefore been made to develop new remote sensing instrumentation that is suitable for the detection and classification of these species.9, 13 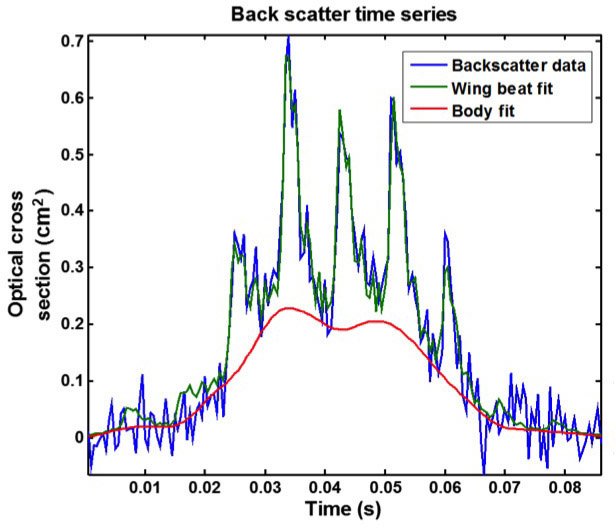 Figure 1. Illustration of a sensed insect event, where wing beats are seen as peaks. The atmospheric backscatter coefficient shown here is measured using a 5kHz lidar, with a wavelength of 808nm. When an insect intercepts the probe volume, a burst of oscillations is recorded. The non-oscillatory part of the signal arises because of backscatter from the insect body cross section, as well as from the fundamental and low harmonics of the diffuse wing backscatter cross sections. High harmonics appear for insects with glossy wings because of specular reflexes.

We have developed and conducted a series of ecological entomology experiments at the newly built Lund University Mobile Biosphere Observatory (LUMBO).14 This facility is a reconfigurable development platform, from which both active and passive remote sensing can be carried out over a wide spectral range. It is also possible to use several different operation modes simultaneously. The laser sources and detectors that are available for use at LUMBO are listed in Table 1 and Table 2, respectively. The activities that are conducted at LUMBO are highly interdisciplinary, i.e., they bridge the fields of laser radar, biophotonics, and ecology. In our research we aim to understand the basic interaction mechanisms between light and insect targets. We therefore use hyperspectral imaging to obtain a broad overview of the spectral signature of different species and body features (see Figure 2).

Table 1. Characteristics of the laser sources that are currently available for use at the Lund University Mobile Biosphere Observatory (LUMBO). The different experimental applications for each of these lasers are also given. CW: Continuous wave.
Table 2. Characteristics and applications of sensors that are currently
available for use at LUMBO.
Si: Silicon. InGaAs: Indium gallium arsenide. InSb: Indium antimonide.
HgCdTe: Mercury cadmium telluride. DC: Direct current.
AC: Alternating current. ⊘: Diameter. (Click on table to enlarge.) 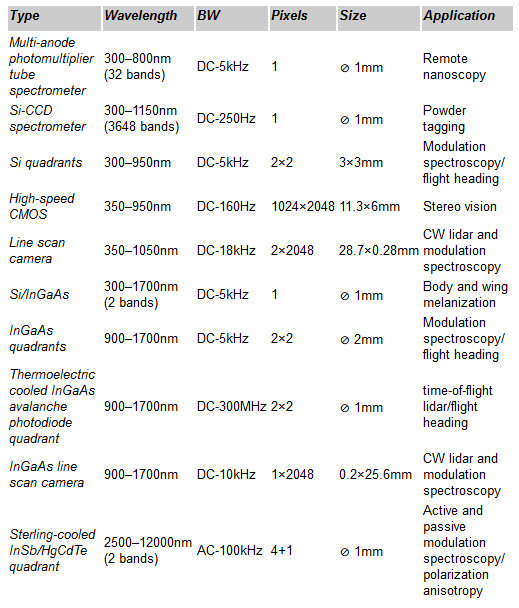 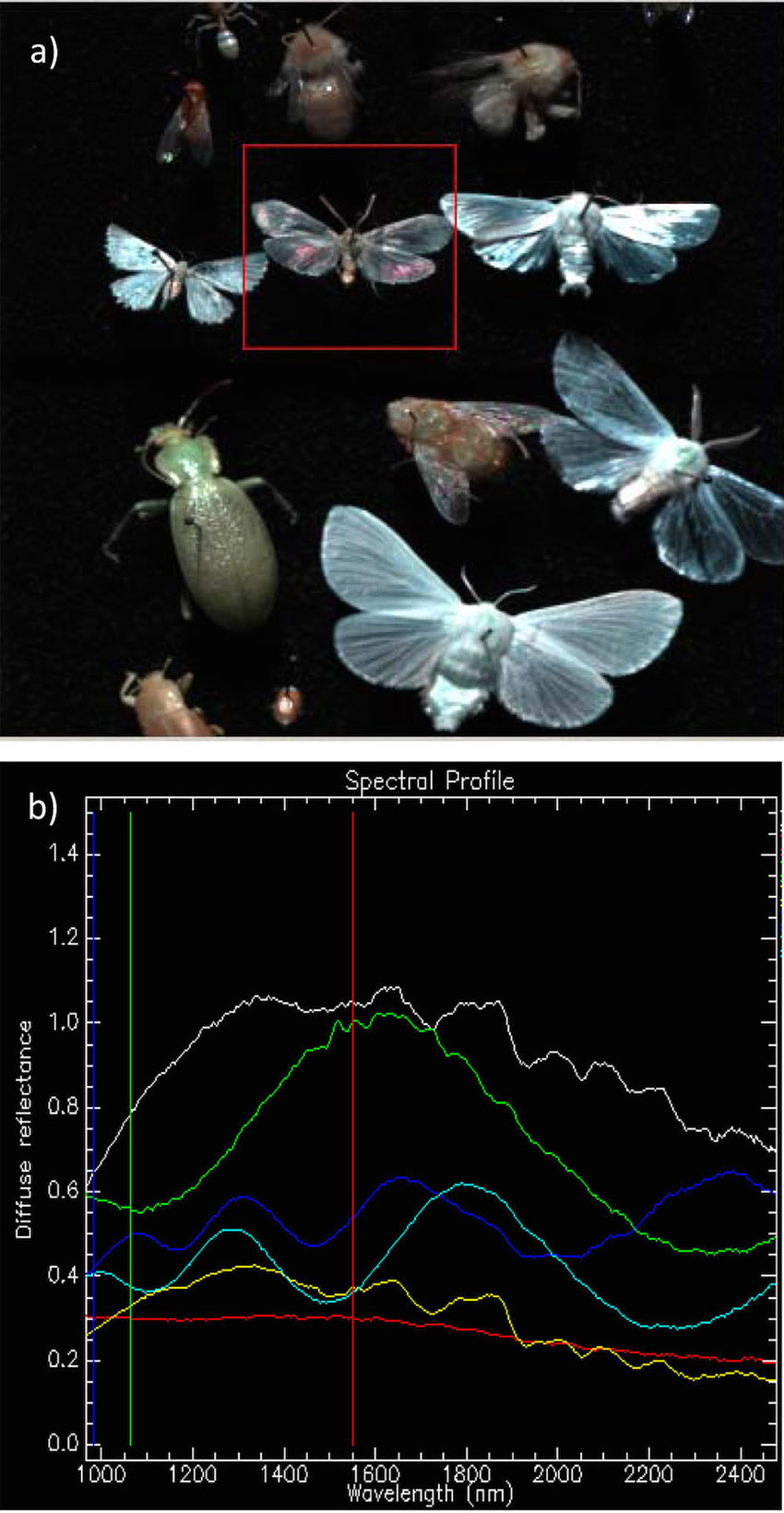 Figure 2. (a) False color images of insects at common laser wavelengths (red: 1550nm, green: 1064nm, blue: 980nm), produced using hyperspectral imaging techniques. (b) Spectral signatures of diffuse and specular signatures of various insect body parts. The diffuse reflectance for all insects peaks at about 1550nm (the telecom band).16Specular wing reflectances display fringes, which have spectral ranges that vary according to the thickness of the wing membrane.

Our remote dark-field study method (see Figure 3) is useful for lidar development.8, 15 With this methodology, we can explore the feasibility of kilohertz-frequency sampling in various bands. We are also able to explore different polarization modes for insect monitoring. Our dark-field method is inexpensive and is based on the passive scattering of sunlight. We find that our dark-field measurements are compatible with results that are derived from lidar measurements. We are therefore able to explore optimal bands without investing in lasers. We can then implement the most appropriate bands into lidar systems. 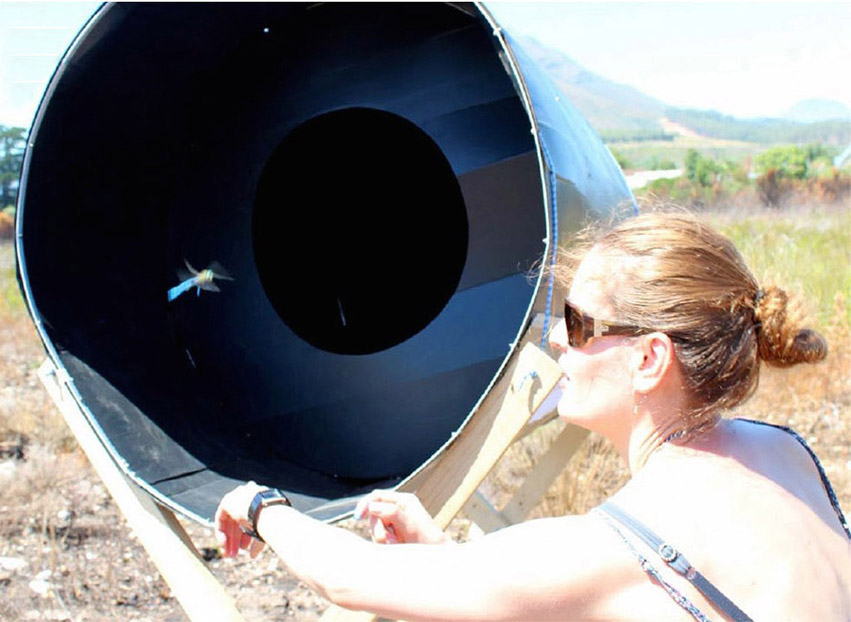 Some of the main applications for which we currently use LUMBO include the classification of night-migrating birds, assessment of pollinator biodiversity and insect biomass spectra, monitoring of agricultural and forestry pests, as well as the assessment of the abundance and fluxes of disease vectors (e.g., malaria mosquitos, horseflies, and biting midges). We have also developed methods for quantifying differences in the aerial reaction kinetics of different species and genders.8 In addition, our powder tagging methods can be used to mark groups of insects that are released for studies of dispersal rates. These methods are analogous to ring marking ornithology and diode tagging techniques, which are used in harmonic radar entomology studies.17, 18 The insects can be powdered with fluorescent dyes so that identical resident and immigrant individuals can be compared.5 These tagging methods can be used either for passive sensing studies, or for active fluorescence lidar applications.

One of the prime data products we obtain with LUMBO is from a kilohertz lidar instrument that is capable of resolving insect wing beat modulation signatures (see Figure 4). We have recently used this instrument to reach a significant milestone, i.e., counting a quarter of a million insect wing beat events per day.19 We therefore now have an opportunity to study small statistical details in this large data set.

Figure 4. Detailed modulation spectra of atmospheric fauna can be resolved using continuous wave lidar (with kilohertz sampling rate). In this example, the body contribution, fundamental tone, and first three overtones of an insect event are visible.

We have developed a series of methodologies, in which we use the new remote sensing facilities at the Lund University Mobile Biosphere Observatory for high spatiotemporal resolution aero-fauna studies. Fast (kilohertz) sampling rates allow us to retrieve harmonic modulation spectra from the wing beat cycle of organisms in the atmosphere. We use hyperspectral imaging techniques to gain insight into the interaction of different targets and a broad overview of different species. We can conduct either passive (i.e., based on sunlight), thermal emission, or active laser-based experiments. We have already deployed the observatory at several different field sites for ecological studies of forestry pests, biodiversity investigations of pollinators in agriculture, and the evaluation of traps for a conventional assessment of livestock disease vector abundances. We are now planning an upcoming international joint radar and lidar campaign for monitoring migrating birds. We also aim to continually increase the signal-to-noise ratio of our measurements, and to install laser ranging capabilities in the short-wavelength IR. In addition, we are currently creating a laboratory reference setup, with which we will produce lookup tables of scatter cross-section values for different species, genders, and age groups.

Mikkel Brydegaard has an MSc in electrical engineering and a PhD in atomic physics from Lund University. He has spent time interning and studying in India and Venezuela, and has held postdoctoral research positions in South Africa and Norway. He specializes in biophotonics, light interactions with biological tissues, remote sensing, and laser radar. He uses advanced signal processing, machine learning, clustering methods, and chemometry techniques in his work. He has extensive experience designing and creating low-cost realistic optical instrumentation for use in the field, and has organized several training workshops for researchers in Africa and South America. He is one of a few researchers working in the fields of lidar entomology and lidar ornithology.