In the United States alone, approximately 29.1 million people have diabetes, and about 60% of non-traumatic amputations of the lower limbs are performed on adults with the condition. This fraction equated to about 73,000 adults in 2010,1 and the treatment of diabetic foot ulcers cost $ 9–13 billion.2 Reducing the extent of amputations (and therefore the cost) requires objective wound monitoring during the treatment process, although to date physicians have few means to do this. Current methods are visual inspections and studies of still, visible-light images.

To address this problem, we have developed a scanner that uses near-IR (NIR) light to image wounds without contact. Our NIR optical scanner (NIROS) is safe, affordable, and available on site. It images large wound areas using real-time, 2D imaging in reflectance mode (based on contrast from variations in the refractive indices of the target tissue), and provides information about what is occurring below the surface of the wound. By contrast, existing NIR-based devices for diabetic ulcer monitoring image through contact3 and at discrete point locations, thus restricting the ability to cover the entire wound area and surrounding tissue in real time.

NIROS images differences in blood flow beneath the surface of the wound with respect to its peripheries. It captures these differences from the detected NIR optical signals obtained by non-contact imaging of the entire region of interest in real time. Physicians would use NIROS for weekly monitoring of a wound to obtain optical contrast, and then determine whether the wound under a specific treatment was healing or not. If the data revealed that the ulcer was not healing using a specific treatment, the physician could alter the plan accordingly. This would reduce the amount of time it takes for the wound to heal and also save money by avoiding trial-and-error treatment options. Physicians could treat patients' wounds more efficiently with a customized plan.

The NIROS system comprises two NIR LEDs (710 or 830nm), an NIR-sensitive camera, and a driver controlling the LEDs. NIROS images tissue areas of >12cm2 without using optical fibers. The detector collects light reflected from the tissues, enabling diffuse reflectance imaging. Custom-developed Matlab software processes the data to acquire an optical contrast of the wound with respect to its surrounding tissue.

The absorption of NIR light varies according to whether a wound is healing or otherwise. Non-healing wounds are arrested in the inflammatory stage, which has increased absorption (or decreased reflection) of NIR light, as there is greater concentration of stagnated blood in the region. Conversely, a wound that is healing will progress from the inflammatory to the proliferation stage, followed by remodeling. With progression into proliferation, there is greater consumption of blood at the wound site, causing less absorption (or greater reflection) of NIR light in the region. Figure 1 shows examples from clinical studies performed on diabetic foot and/or leg ulcers, with healing and non-healing wounds.4 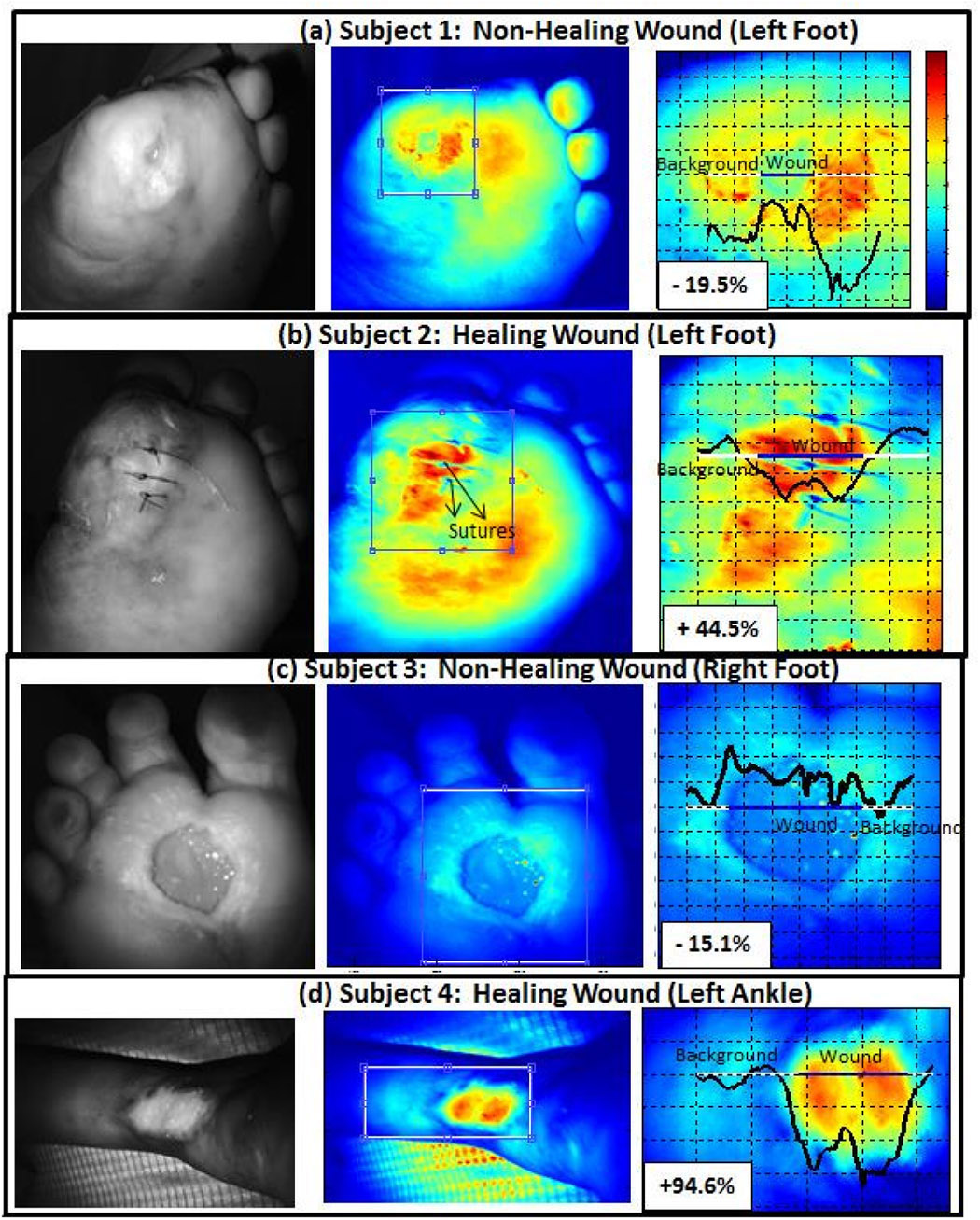 Figure 1. (a–d) Near-IR optical images of diabetic foot wounds. The plots in the third column on the right correspond to the zoomed-out region of interest, with the intensity profile at a chosen y plane. The intensity varies from maximum to minimum along the y axis. The plots show the scanner's ability to differentiate healing from non-healing wounds, as observed in a positive optical contrast in healing and a negative optical contrast in a non-healing wound.

In conclusion, there is a need to objectively monitor diabetic ulcers, and NIROS provides quantitative analysis of wounds for physicians and insurance companies. In addition, NIROS is safe, non-invasive, non-contact, and affordable. To date, results reveal that our approach can differentiate healing from non-healing wounds based on differences in the extent of reflected NIR light. Our future work will focus on testing the system's robustness through extensive clinical studies.

Anuradha Godavarty is an associate professor in the Department of Biomedical Engineering. Her research interests are in optical imaging technologies for breast cancer imaging, functional brain mapping applications, and wound monitoring (instrument development and computational analysis).