Photo and video cameras are popular tools among both scientists and consumers. Sensor noise, which can be divided into random and pattern components, represents one of the main factors limiting the amount of data that a camera can produce.1 Temporal noise varies randomly, whereas spatial noise has a pattern that arises due to sensor non-uniformities. Spatial noise is usually several magnitudes lower than temporal, to the extent that it can be neglected at first approximation. Knowledge of temporal noise is required in a number of optical digital systems, including wavefront coding for imaging (for aberration correction, extended depth of field, pattern recognition, and optical encryption), digital holography, image forensics, and increasing camera signal-to-noise ratio.

Camera sensor noise can be measured using a variety of techniques. The most widely used among these is EMVA Standard 1288,2 which allows accurate dark and light temporal noise measurement but can be technically difficult to implement. Additionally, if the dependency of the temporal noise on signal value is required in detail, thousands of shots are necessary, making such measurement extremely time-consuming. Analysis of existing temporal noise measurement methods proves that noise measurement by automatic segmentation of non-uniform targets represents one of the fastest and simplest techniques.3 This technique suffers from several significant drawbacks, however, such as an inability to measure noise over the full signal range and a failure to divide full temporal noise into light and dark components. Furthermore, researchers have failed to provide estimates of measurement errors, making its accuracy unknown.

We have proposed a modification of this method4 that provides an unbiased estimation of the temporal noise, faster processing speeds, and separate measurements of dark and light temporal noise. Using our method, just two frames are required for noise measurement.

These constraints enable us to obtain the dependency of temporal noise on signal value for all possible values within the photosensor dynamic range. This makes it possible to find not only full temporal noise, but also dark temporal noise and the dependency of light temporal noise on signal value. To achieve the best possible measurement accuracy, the intensity histogram of registered images should be close to uniform. To accomplish this, we used a defocused image of a binary transparency with a contrast ratio exceeding the dynamic range of the camera. An additional grayscale transparency located nearby allows the histogram of the registered image to be equalized. These binary and grayscale transparencies form the test scene. We then register several shots of this scene and subsequently calculate the pointwise averaged image. The array of squared standard deviations in the signals of each pixel is also calculated, giving the array of variances. From this array, pixels with equivalent signal value from the averaged image are chosen and their mean value is calculated. The temporal noise estimation for this signal value is the square root of the mean variance.

These procedures are performed for all signals within the dynamic range of the sensor and can be calculated very fast (1–20s) using a standard computer. Figure 1 shows the scheme of temporal noise measurement. 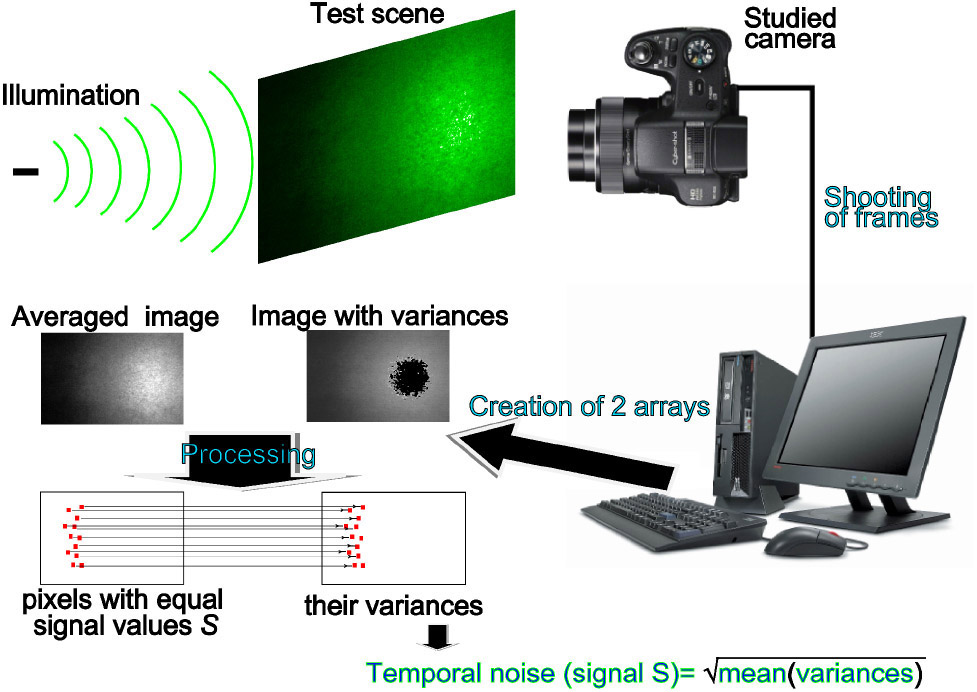 Figure 1. A scheme of our proposed technique for temporal noise measurement. A non-uniform test scene is illuminated and registered by the camera. The frames that are obtained are averaged in one array, and the squared standard deviations of the signals of each pixel are used as the second array. Pixels corresponding to the equal signal value from the first array are then chosen from the second array, and their mean value is calculated. The temporal noise estimation for the signal value is the square root of the mean variance. 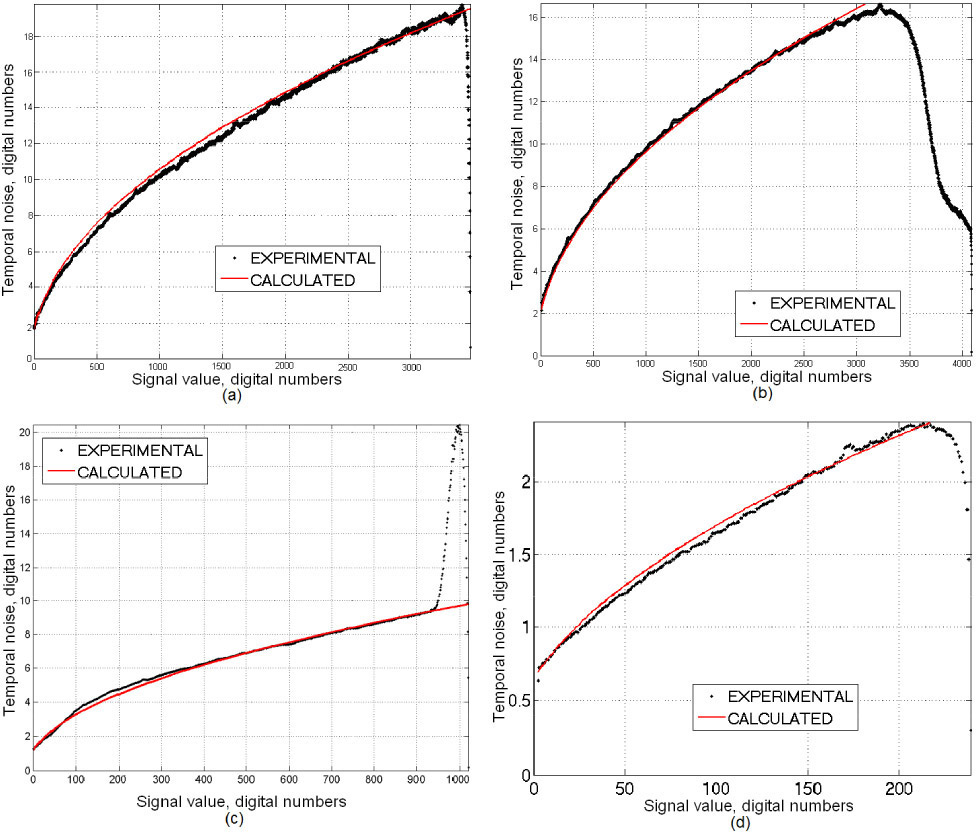 We have also theoretically and experimentally estimated the measurement errors using this proposed technique. The mean values of errors obtained for signal values in the range 0–3300 are shown in Table 1. The mean relative difference between the corresponding theoretical and experimental values is 0.4%. Using two frames, the error value is 1.6%.

In summary, our modified temporal noise measurement method provides a convenient and accurate way to assess the output of photo and video cameras using a remarkably small number of frames. Over the past few years, we have proposed several techniques for electronic imaging and signal processing. These include measurement of the 2D modulation transfer function,5, 6 increasing the signal-to-noise ratio of registered images by using the light spatial noise portrait of the camera's sensor,7 and increasing the noise-characteristics measurement accuracy for cameras with color filter sensors.8 In future work, we plan to measure the noise and spectral characteristics of other cameras, including web cameras and dashboard cameras. We are also currently developing our technique for the simple measurement of spatial noise in cameras.

Pavel Arkadevich Cheremkhin received his PhD in physics in 2013 and is an assistant professor in the Department of Laser Physics. His main research interests are digital holography, camera noise, diffraction optics, wavefront reconstruction, signal processing, and analog optical links. He has more than 70 publications in journals and conferences.

Vitaly Vyacheslavovich Krasnov received his PhD in physics in 2013 and is now an assistant professor in the Department of Laser Physics. His main research interests are optical encryption, diffractive optical element synthesis, wavefront reconstruction, signal processing, and camera noise. He has more than 60 publications in journals and conferences.