Natural forests cover almost 30% of the global landmass and their decrease over time owing to growing human activity increases carbon emissions, although replanting is ongoing in several countries. Deforestation and degradation of forest cover occur globally and quickly; accordingly, we need to monitor these processes from space in a timely fashion.

Optical imaging—as represented by Landsat—is the best-known method for measuring forest cover and has been used since 1972 to screen areas with low cloud cover, producing a long-standing data set. Another method is high-resolution synthetic aperture radar (SAR) that uses low-frequency microwaves, which enable forest and non-forest/other land use to be easily differentiated under all weather conditions. Three SAR frequency bands are available for use in space. Of these three bands, the L-band of 23cm wavelength has a higher ability to distinguish forest areas than the C-band of 5.6cm and X-band of 3cm wavelength.

The phased-array type L-band SAR (PALSAR) was a high-resolution multi-polarization low-noise radar, which was installed on the Advanced Land Observing Satellite (ALOS) and operational for 70% of its duty cycle. At the Japan Aerospace Exploration Agency, we launched this satellite into a polar orbit (691km altitude) and operated it from 2006 to 2011. During its five-year mission life, ALOS collected 2.1 million SAR images 70 × 70km in dimension, which corresponds to an average of 16 images for each location.1 We made observations systematically using the Basic Observation Scenario (BOS),2 with two observations during the period June to September and one between November and January each year. A major reason for using the BOS was that it provided data that was consistent over time and space and could be used to monitor forest cover as well as degradation. We calibrated the data robustly throughout and maintained radiometric and geometric accuracies of 0.6dB and 7.8m, respectively.3

We found that terrain-corrected radar backscatter from forests in horizontal transmission/vertical reception (HV) mode was high and very stable (−12.07dB average and 0.21dB annual average standard deviation over four years), whereas backscatter from non-forest areas was low and variable (−18.49dB with 3.84dB standard deviation). Thus, we started to apply PALSAR data in HV mode to estimate forest cover and its annual variation.

We generated four global mosaics of PALSAR horizontal transmission/horizontal reception (HH) and HV polarization data at 25m spatial resolution using data acquired annually from 2007 to 2010. We observed variability in L-band HH and HV backscattering coefficient, γ0, values for forests between regions, which we attributed to differences in forest structure and vegetation/surface moisture conditions. Accordingly, we applied region-specific backscatter thresholds to produce from each annual mosaic a global map of forest and non-forest cover, from which we generated maps of forest losses and gains (see Figure 1). As shown in the four-year color composite of forest cover in Indonesia and Malaysia in Figure 2, the natural forest cover in Sumatra (bottom left) is decreasing. The overall levels of agreement between our results and those of forest/non-forest assessments using the Degree Confluence Project, the Forest Resources Assessment, and Google Earth images were 85%, 91%, and 95%, respectively. 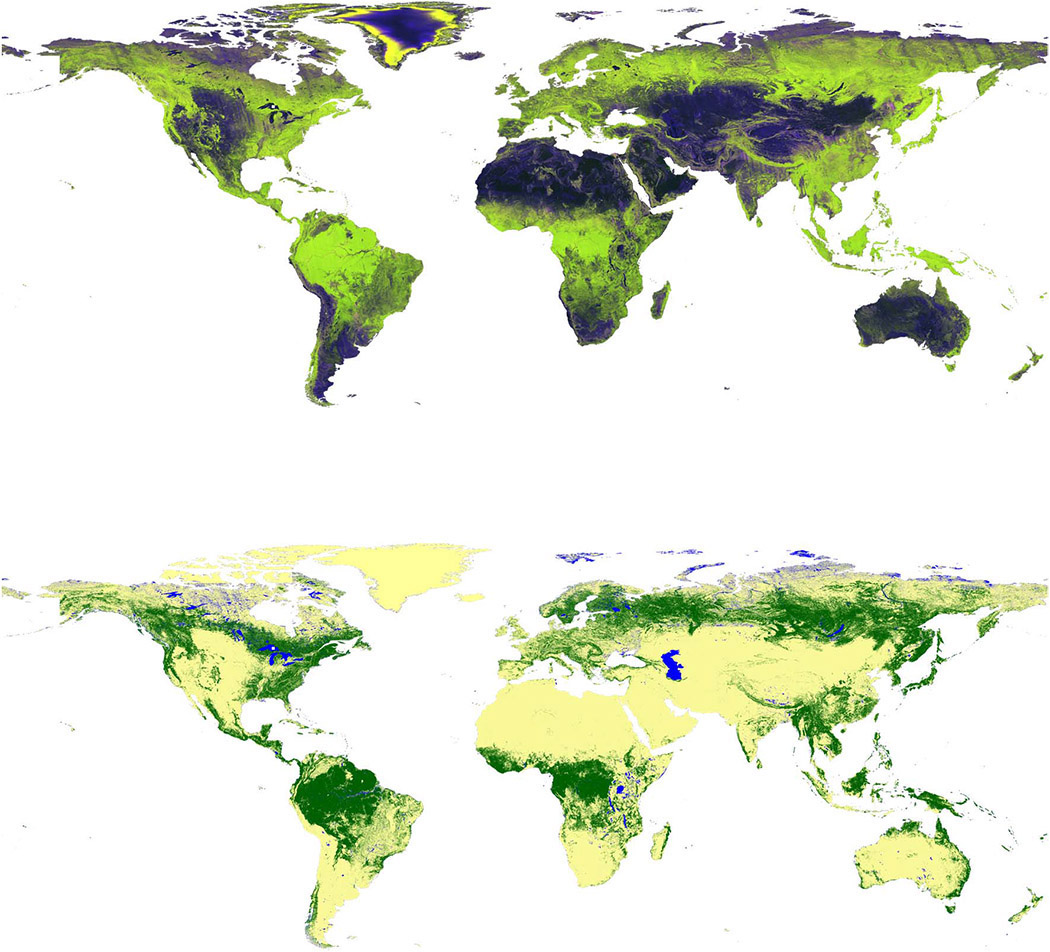 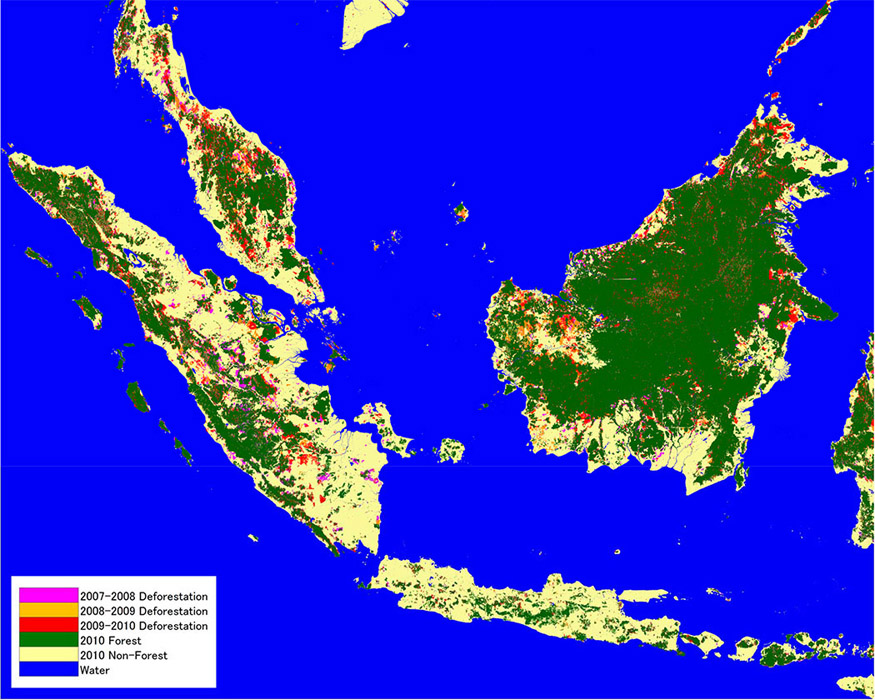 We first estimated the global forest area as 38,542,500km2 from the ALOS/PALSAR data set,4 following the Landsat-based estimation of forest area as 40,656,570km2.5 The difference can probably be attributed to a difference in the sensitivity of optical and L-band SAR techniques in measuring forest cover. Maps of forest/non-forest areas provide basic information for the interpretation of forest cover, so we anticipate the frequent generation of L-band SAR mosaics and related forest/non-forest maps from the forthcoming ALOS-2/PALSAR-2 data set.

In summary, L-band SAR backscatter provides the basis of information regarding forest and non-forest areas on a global scale. The enhanced maps and classification of land use provide a new global resource for documenting the changing extent of forests and also offer opportunities to quantify historical and future changes through comparison with data from the Japanese Earth Resources Satellite-1 SAR (1992–1998) and ALOS-2/PALSAR-2 (from 2014). We have made four-year PALSAR mosaics and forest/non-forest data with 25m resolution freely available to the public.6 We also plan to distribute the original-resolution data sets from ALOS-2/PALSAR-2.

Masanobu Shimada is an SAR research scientist at the Japan Aerospace Exploration Agency and professor with over 25 years' experience in the fields of SAR imaging, calibration, interferometry, polarimetry, and their applications.