Microfluidic biosensor devices may represent the next generation of inexpensive and easy-to-use point-of-care biomedical sensors. Many different optical technologies are therefore being investigated for biosensing applications. One technology is based on the optical resonances that can form within transparent glass spheres or capillaries. These resonances are somewhat paradoxically known as ‘whispering gallery modes’ (WGMs), due to the historical role played by acoustic phenomena in the study of cylindrical resonances.

Optical WGMs are an electromagnetic interference phenomenon for radiation propagating along the circumference of a (typically) glass sphere or cylinder. The resonance wavelength and linewidth depend on the optical properties of the dielectric media sampled by the mode field. In a microsphere, the mode field extends slightly outward into the external medium, and the resonance frequency is therefore sensitive to compositional changes that occur just outside the microsphere surface. In a capillary, on the other hand, the resonant field must extend into the channel for sensing applications.

Both bulk refractive index sensing (i.e., changes in the overall fluid composition) and biosensing (i.e., the binding of specific biomolecules to the sensor surface) have been widely demonstrated for microspheres.1,2 Measuring the frequency shifts associated with the WGMs of glass cylinders or spheres is among the most sensitive optical sensing methods currently known.3 State-of-the-art optical sensing uses plasmonic enhancements of the WGM field to achieve unprecedented sensitivity to the binding of single biomolecules to the sensor surface.4, 5 While these advances represent amazing technical achievements, the sensor devices tend to be fragile, require expensive equipment, and need laborious preparation. For these reasons, it is somewhat difficult to visualize how such devices might be employed in practical applications at the current time.

We have developed an alternative method that uses fluorescent WGMs of a quantum-dot-coated capillary structure. A thin layer of fluorescent quantum dots coats the channel walls of a standard glass microcapillary. Crucially, the effective refractive index of the coating is higher than that of the adjacent glass. These devices function by exciting the quantum-dot fluorescence, some of which becomes trapped by total internal reflection as it propagates around the interface between the coating and the glass capillary wall (see Figure 1). If the quantum-dot coating is sufficiently thin, the WGM mode field is able to sample the fluids pumped inside the capillary channel. These devices are, effectively, a fluorescence version of the much more widely studied liquid-core optical ring resonator.6, 7 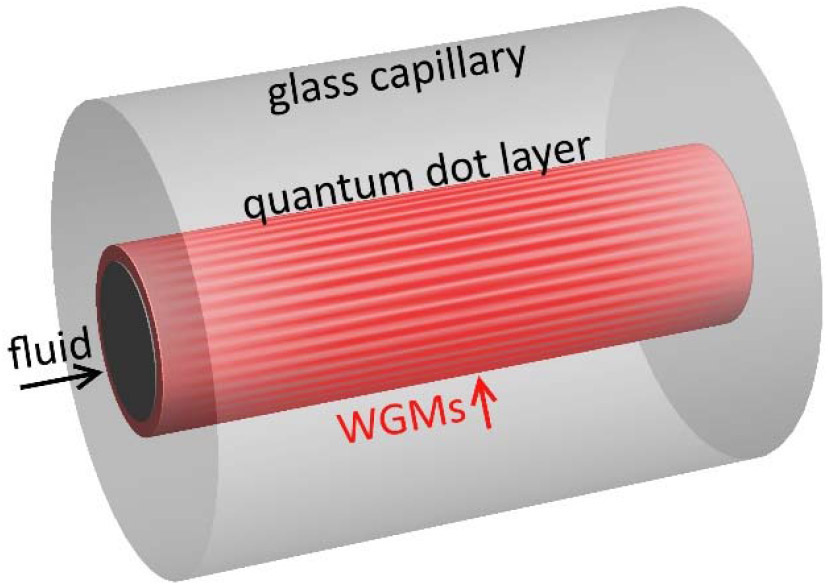 Figure 1. Structure of a fluorescent-core microcavity sensor. Whispering gallery modes (WGMs) are illustrated as red ‘oscillations’ mainly in the quantum-dot layer. A fraction of the mode field extends into the channel, sampling any fluids pumped inside.

Our method removes the need for an expensive laser and renders these inherently microfluidic devices both durable and easy to use. Figure 2 shows our sensor, which can be easily held and manipulated by hand with little danger of breakage. Of course, the trade-off is that one cannot currently approach the detection limits of systems that use a narrow-bandwidth tunable laser to measure the mode wavelengths, although as discussed below, there are several ways to increase the sensitivity of these devices for biosensing applications.

We demonstrated biosensing with a fluorescent microcapillary of the type shown in Figure 1. We used the well-known specific interaction between biotin and neutravidin as a model system, mainly because the strong binding interaction between these biomolecules makes this an excellent test system. The silicon quantum dots produced a bright red fluorescence in the channel region and showed clear WGM oscillations in their emission spectrum (see Figure 3). The thickness of the coating could be controlled via etching using strong sodium hydroxide solutions, alleviating the need to use hydrofluoric-acid etching.9 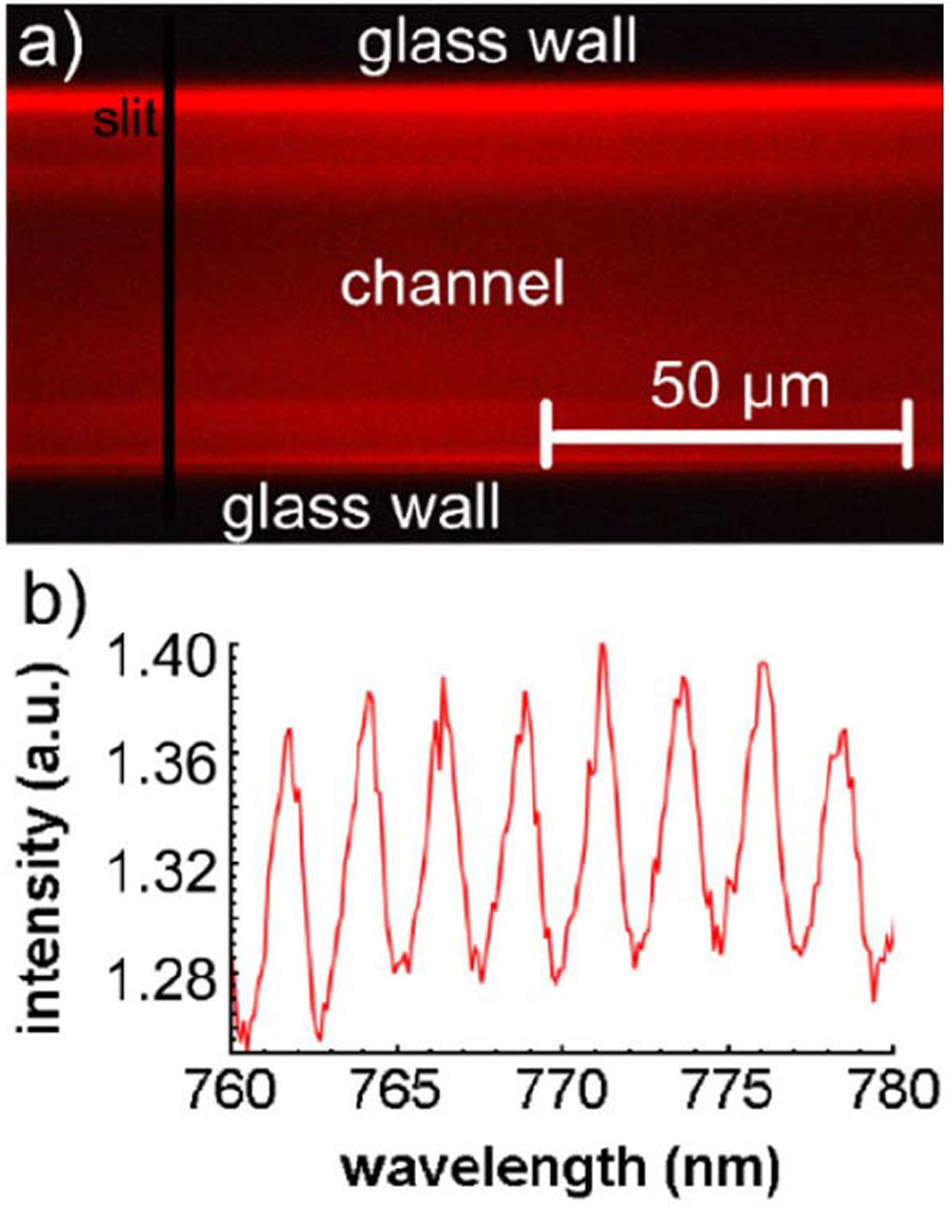 Figure 3. (a) Fluorescence image of the capillary channel. The red glow is due to the quantum-dot emission. The representative slit orientation (perpendicular to the channel) is shown. (b) A typical WGM emission spectrum over the range 760–780nm.8 a.u.: Arbitrary units.

To functionalize the sensor surface for biosensing, we next deposited an amine-terminated polymer film, using a layer-by-layer polyelectrolyte scaffold10 directly on the quantum-dot film. The amine functionality was subsequently used to covalently immobilize biotin through amine coupling reagents, rendering the capillary surface sensitive to biomolecular interactions with neutravidin. A set of blanks confirmed minimal nonspecific neutravidin binding. In a further experiment, we used the same surface functionalization scheme for the nonspecific binding of vitamin D binding protein,11 which could lead to novel point-of-care vitamin monitoring methods.

In summary, we have developed a sensitive, laser-free biosensor using fluorescent WGMs of a quantum-dot-coated capillary structure that is durable and easy to use. These devices could represent a microfluidic alternative to some types of currently available bioassay technologies. The protein detection limits were in the nanomolar range for these quite simple and durable sensor devices, approaching the desired detection limits for many biosensing applications. There are, however, a number of ways we can improve the sensing performance of this platform in future work. These include achieving a better signal-to-noise ratio by projecting the spectrum onto full vertical CCD arrays, sensitivity enhancement via further thinning the quantum-dot film, the use of a higher-resolution spectroscopic system (although this comes at a cost), or even by plasmon enhancement using methods similar to those demonstrated for microsphere sensors.

Al Meldrum is a professor of physics interested in quantum dots for sensing applications, among a range of related topics.