Chemical self-organization on silicon with gold nanoparticles assembles a nanostructure for a reproducible Coulomb blockade and opens the way for molecular single-electron nanoelectronics.
18 June 2015
Olivier Pluchery

Think about electronics: how could you fabricate the smallest device possible? For current flow, to minimize power consumption, you want electrons to flow one at a time. Such control is possible using the quantum phenomenon of a Coulomb blockade, which occurs in double barrier tunnel junctions (DBTJs) as suggested in the 1990s. For an electrical circuit made of two tunnel junctions of ultra-low capacitance as shown in Figure 1(a), the current is blocked until the bias is raised above a threshold V1. Above V1, charges flow one by one. This ultimate control of the electron flow is of practical interest for building a single-electron transistor, or a memory where information is stored by just a few electrons.

In practice, a DBTJ is achieved by placing a conducting nanoparticle between two electrodes connected through two tunnel junctions. Achieving Coulomb blockade requires morphological control at the nanometer scale: ideally the nanoparticle will have a diameter of 5nm and the tunnel junctions a thickness of 1nm that needs to be controlled with an accuracy better than 0.1nm: see Figure 1(b). 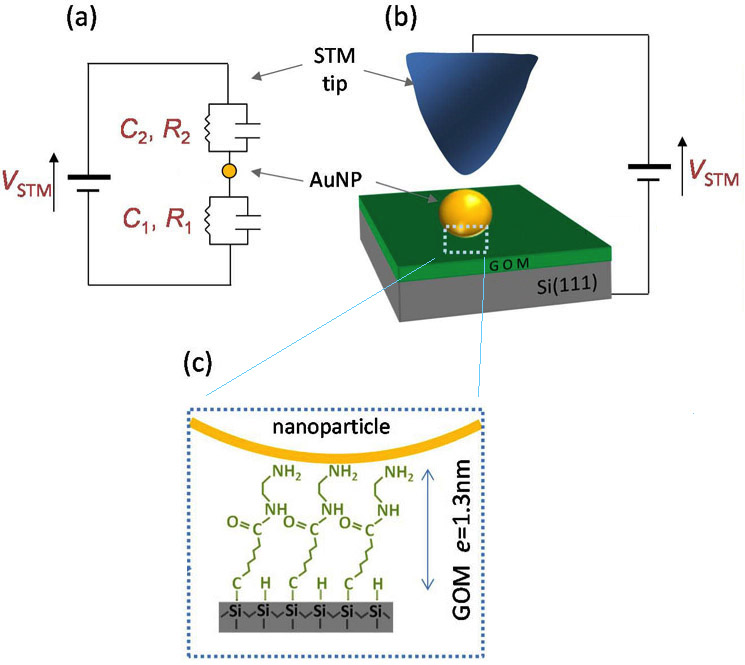 Figure 1. (a) Electrical model of a double barrier tunnel junction (DBTJ) made of two ultra-small capacitors in series (C1, 2, in parallel with resistors R1, 2), creating an ‘island’ that can store individual electrons. (b) The practical architecture of our DBTJ with a grafted organic monolayer (GOM) on silicon (Si), with the chemical process optimized for the Si(111) crystalline orientation, a gold nanoparticle (AuNP), and the tip of a scanning tunneling microscope (STM). (c) The molecular layer is electrically homogeneous and protects the silicon substrate from oxidation.

With colleagues, I have built such tunnel junctions by optimizing a set of chemical processes on an oxide-free silicon substrate where an insulating molecule was covalently grafted to surface silicon atoms. A so-called grafted organic monolayer (GOM) provides a 1.3nm-thick tunnel junction: see Figure 1(b) and (c). The GOM has three crucial advantages: it passivates the silicon substrate and prevents oxide formation; the insulating molecules provide a tunnel barrier with reproducible thickness and stable electrical characteristics; and the terminal chemical group can be chosen to bond to gold nanoparticles.1, 2 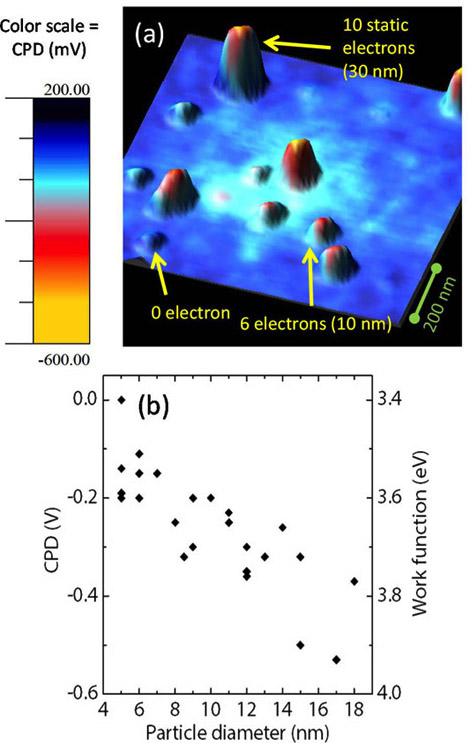 Figure 2. (a) The Kelvin probe force microscope (KPFM) provides a topographic image of gold nanoparticles on oxide-free silicon functionalized with a GOM, and simultaneously measures the contact potential difference (CPD). This 3D image describes the morphology, whereas the color scale (left) is related to the local CPD. (b) The evolution of the CPD (left scale) and apparent work function (right scale) of the nanoparticles as a function of their diameter.

We also investigated the dynamical electrical behavior of gold nanoparticles. By placing the tip of a scanning tunneling microscope (STM) above one of the gold nanoparticles in an ultra-high vacuum (UHV) at 40K, we fabricated the DBTJ depicted in Figure 1(b). Under a certain bias VSTM, a current may flow through the system only if electrons receive enough energy to climb up one Coulomb step. This occurs when VSTM is greater than the threshold given by V1=e/2CS, e being the elementary charge and CS the sum of the capacitances of the two junctions. In our case this capacitance is 0.2aF (0.2×10−18 farad) and the threshold is detected at 0.5V. If VSTM=0.5V, one electron at a time is allowed inside the nanoparticle. If VSTM is further increased, electrons can flow two by two, or three by three, and so forth (see Figure 3), and a Coulomb staircase is observed. The current is of the order of magnitude I1=10pA, which indicates that the average residence time of electrons in the nanoparticle is Δt=e/I1=20ns. Finally, we have also studied the reproducibility of the Coulomb blockade behavior as a function of many parameters. We achieved a reproducibility of 80% with 8nm, monocrystalline gold nanoparticles that were annealed at 150°C in vacuum.5 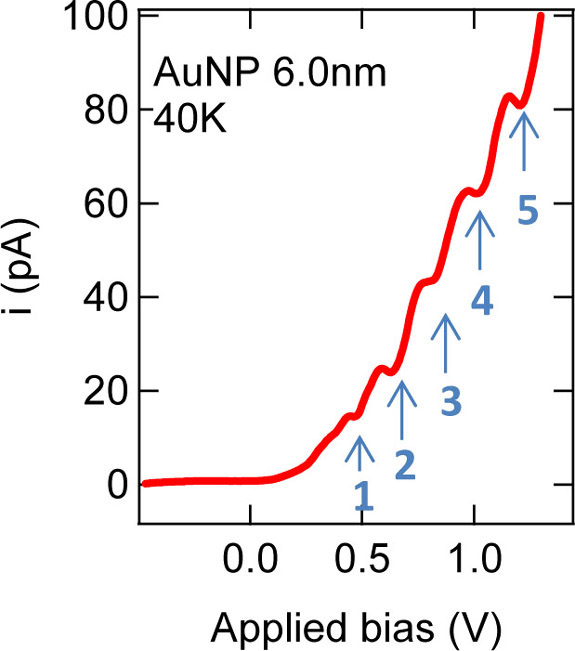 Figure 3. Current-voltage (I-V) characteristics across our DBTJ as measured with an STM in an ultra-high vacuum at 40K in the configuration shown in Figure 1(b). Each step of the Coulomb staircase corresponds to an additional electron flowing through the gold nanoparticle.

In summary, we have demonstrated a Coulomb blockade device based on chemical self-organization, which could provide a reproducible tunnel barrier on a semiconducting substrate and open promising perspectives for designing a new set of electronic devices with ultra-small currents or a new class of transistors. By varying the doping level of the silicon substrate, we can shift the coulomb staircase current-voltage (I-V) curve.6 Our next step will be to fabricate a single-electron transistor where we will adjust the I-V curve by controlling a gate voltage applied in the vicinity of the nanoparticle.

Olivier Pluchery is an associate professor at UPMC, where he is currently developing programs of research to control the adsorption of organic molecules on silicon and the self-organization of gold nanoparticles. He focuses on self-assemblies of molecular architectures and gold nanoparticles for nanoelectronics and plasmonics.