The wavefront errors of active space telescopes, such as the James Webb Space Telescope, can be reduced with the use of scheduling restrictions or predictive control algorithms that incorporate thermal models.
02 December 2015
Jessica Gersh-Range and Marshall Perrin

Active control algorithms can improve the performance of large telescopes by providing lower and/or more stable wavefront errors (WFEs), and by enhancing science capabilities. Although active control algorithms are commonly used for ground telescopes, such algorithms for space telescopes are less mature because of differences in the observatory environment and design constraints. One key difference is the frequency of the mirror state updates. Mirror updates for ground telescopes are made continuously so that rapid weather-driven perturbations can be compensated. In space, the main challenge for active wavefront maintenance is minimizing degradations from medium-timescale (i.e., hours to days) perturbations, and there are incentives to minimize the number of wavefront corrections. As a result, space telescope mirror updates are made only occasionally.

For active space telescopes at the second Lagrange point (L2), the control problem involves weighing control costs against the benefits of correcting predictable wavefront perturbations. These perturbations are a byproduct of the observing schedule, which we know and determine in advance. The baseline control scheme for the first large active optical/IR space telescope—the James Webb Space Telescope (JWST)—consists of measuring the WFE every two days, and using these measurements to apply corrections every two weeks as needed.1 Although this scheme satisfies the JWST requirements, alternative control algorithms may be able to further improve the performance.

We have investigated two techniques that can be used to achieve lower wavefront errors by incorporating thermal models. In one approach we derive scheduling constraints that passively limit the WFE change during an observation. In our second approach, we use a predictive hybrid control algorithm to determine when the WFE will exceed a desired threshold and to schedule corrections in advance.2

To conduct these investigations, we have developed a model for the WFE as it evolves in response to attitude-induced thermal fluctuations over the course of a hypothetical mission. As the telescope slews, variations in the solar heating cause changes in the thermal state of the telescope. These changes alter the thermally induced deformations in the observatory structures, and thus perturb the WFE. The thermal state of an active space telescope at L2 is a complex function of attitude history because there is insufficient time to equilibrate between slews. The time constant for typical cryogenic shielded telescope designs is on the order of days, while observations typically last a few hours.3–5 Our model thus relates each attitude to an equilibrium thermal state, determines the thermal evolution throughout a mission, and calculates the corresponding WFE using a linear model that is based on detailed finite-element modeling results.

Since the wavefront perturbations are a byproduct of the observing schedule, we are able to predict when the WFE will exceed a specific correction threshold. As a result, we derive scheduling constraints to passively control the WFE by avoiding attitude changes that cause large thermal changes. A similar approach has been considered for managing the spacecraft momentum, which also depends on attitude.6 There are many factors that must be assessed during the planning of telescope observations. It is therefore implausible that scheduling constraints alone can be used to eliminate the need for active corrections. However, scheduling constraints may be particularly beneficial for the longest observation blocks, which most readily lead to large thermal changes.

Alternatively, we can incorporate our WFE predictions into an active control algorithm that is designed to prevent the WFE from exceeding the correction threshold. Although the active control algorithms for large ground telescopes are typically variations on classical control laws,7–11 we find that the control problem for active space telescopes can be more naturally expressed as a hybrid control problem. Hybrid systems consist of interacting continuous and discrete subsystems, e.g., the interaction between a room's temperature and a thermostat.12 In the case of an active space telescope, the continuous WFE evolution is affected by continuous dynamics (e.g., thermal evolution) as well as discrete events (e.g, the start of a new observation or the implementation of a mirror update). 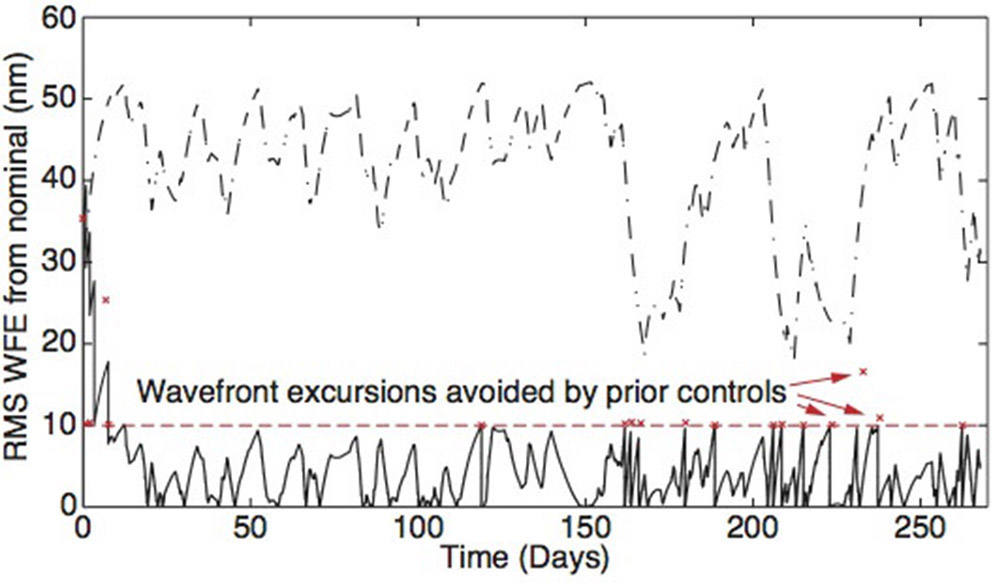 The content of this article has been adapted from the original paper.2

Marshall Perrin is an associate astronomer and a member of the Telescopes Team. His research is focused on the development of advanced instrumentation and data processing methods for the characterization of extrasolar planetary systems. These techniques include adaptive optics, coronagraphy, integral field spectroscopy, and differential polarimetry. He received his PhD from the University of California, Berkeley, and subsequently undertook his postdoctoral studies at the Infrared Laboratory of the University of California, Los Angeles.