For short-reach optical interconnects in data centers, server clusters, and supercomputer applications, the vertical-cavity surface-emitting laser (VCSEL) has emerged as the dominant emitter. It is estimated that the demand for optical interconnects for these applications will reach a market revenue of $520 million by 2019.1 VCSELs are currently being optimized for modulation rates of 25Gb/s, but demand for bandwidth is expected to reach serial data rates of 40–100Gb/s in the coming years. Furthermore, as data centers become physically larger in size, the optical interconnects used must achieve high bandwidth over longer fiber transmission distances, requiring both narrow spectral width and sufficient output power from the emitter. These demands constitute a formidable challenge and encourage the development of alternative designs and modulation concepts that maintain the significant advantages in performance, power efficiency, packaging, and manufacturing costs inherent in VCSELs.

One such concept is the direct modulation of a single-mode, coherently coupled VCSEL array.2, 3 A transverse-coupled-cavity VCSEL—one with an integrated lateral feedback resonator—was shown to produce enhanced modulation amplitude at high frequency, demonstrating a 29GHz modulation bandwidth and a 36Gb/s modulation rate.4 Using resonance and coherence tuning of planar, phased photonic crystal 2×1 VCSEL arrays, we have been working on an approach to enhance modal control and allow strong optical coupling of array elements. Using this approach, we have developed a novel structure with significantly improved performance in addition to an operation technique that enables control over the enhanced frequency response.2, 3

The optically coupled phased VCSEL array is formed by combining a photonic-crystal-etched hole pattern with a laser gain structure defined by ion implantation: see Figure 1. The photonic crystal is a hexagonal lattice of circular holes. In this lattice, defects define the optical apertures of each array element. We designed the gain apertures such that they overlap both the top metal contacts and the photonic crystal apertures with an ion-implanted semiconductor, which acts as a non-conductive separation between the array elements. Optical coupling between the elements is enhanced by an anti-guiding laser array structure.5

The photonic-crystal-etched hole pattern, which provides stable index guiding for the fundamental mode of array elements and greater optical loss for transverse modes, improves the modal control.6,7 Inter-element current confinement enables independent biasing of array elements and, in combination with the increased modal control, results in a method for controlling the enhanced modulation response.2, 3,8

Tuning the resonance and coherence of the phased VCSEL array under stable coherently coupled operation allows us to control this enhanced modulation response. Preferential current injection to an array element changes the cavity refractive index for that element via ohmic heating and electronic suppression, thereby varying its natural resonance.5 In effect, by varying the bias conditions, we are able to tune the resonance of each element as well as the phase relation and coherence of the array.9 By tuning the resonances of each array element into spectral overlap, with relative phase differences between the coupled cavities near zero (in phase) or pi (out of phase), stable coherently coupled operation can be achieved. Resonance detuning and variation of the phase relation of the array under coherently coupled operation enables the enhanced modulation response to be tuned.2, 3

The modulation response of a 2×1 phased photonic crystal VCSEL array under varying bias conditions is shown in Figure 2. An array can be tuned to produce an enhanced frequency response to better suit a specific application. Modulation bandwidths beyond 30GHz are particularly useful for ultra-fast optical interconnects in data center, server cluster, and supercomputer applications. A narrow bandwidth amplifier, centered at a millimeter-wave frequency, is useful for ultra-fast wireless communications and radio-frequency photonic-link technologies. 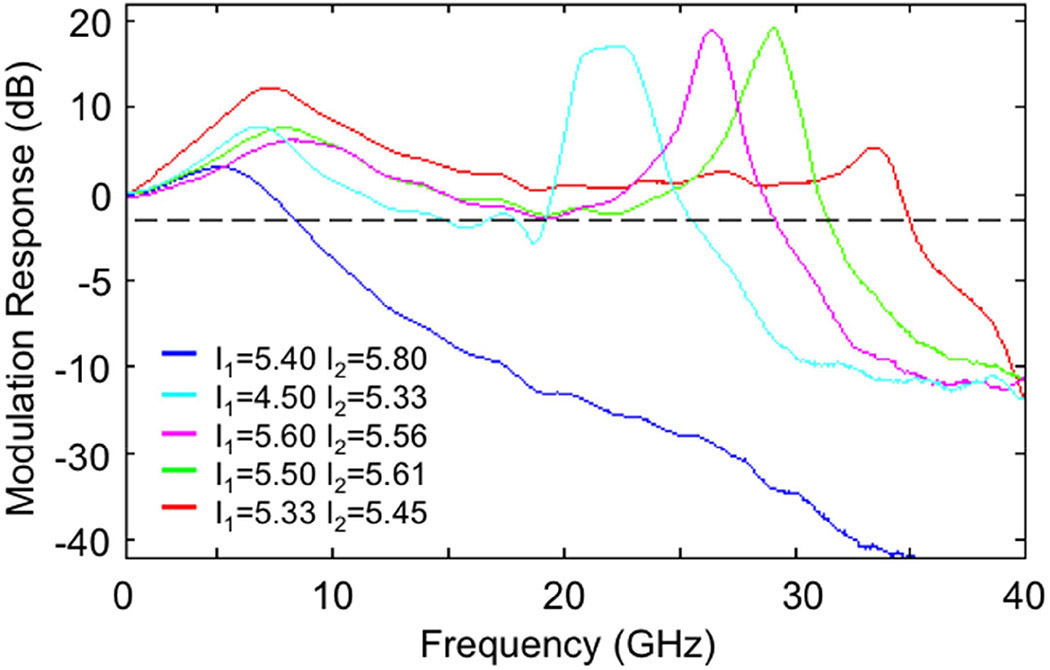 Further performance advantages are also possible using our novel design. Due to the modal control and the nature of coherently coupled operation, the laser-array emission has narrow single-mode spectral width and increased output power.2, 7 Additionally, because of the decoupling of electrical and optical apertures and the independence of the operation technique from the bias-to-threshold current ratio, the device is operational at low current density.2, 10 This design has enabled us to achieve a bandwidth of 37GHz, obtained under highly single-mode (40dB side-mode suppression ratio) coherent operation, with a narrow spectral width (0.043nm root mean squared) and an increased output power (3.4mW) when the laser array is biased at low current density (8kA/cm2).2

In summary, our novel design concept and operation technique enables enhanced modulation response with narrow single-mode spectral widths and a relatively high output power under low-current-density operation. These properties are particularly desirable for reliable, ultra-fast data transmission over large distances in fiber. Additionally, the device benefits from the advantages inherent in the VCSEL structure and its evolution as the dominant emitter in short-reach optical communications. We are now working to optimize devices for use in optical interconnects and photonic link technologies by focusing on different designs to enhance operation in either the broadband, high-resonance frequency, or the high-gain regimes of modulation response.

Stewart Fryslie is a PhD candidate in the department of electrical and computer engineering.