Field-effect transistors based on semiconductor nanowires can operate as fast and sensitive plasma-wave terahertz detectors that are versatile and easy to grow.
21 July 2015
Leonardo Viti, Daniele Ercolani, Lucia Sorba and Miriam Serena Vitiello

One-dimensional (1D) nanostructure devices are at the forefront of studies on future electronics, although issues such as massive parallelization, doping control, surface effects, and compatibility with silicon industrial requirements are still open challenges. Recent progress in controlling the composition and shape of nanowire (NW)-based heterostructures makes them ideal building blocks for implementing rectifying diodes or plasma-wave detectors that could operate well into the terahertz (THz), thanks to their typical achievable attofarad-order capacitance.

Plasma-wave THz detectors exploit the rectification of the incoming electromagnetic field by hydrodynamic nonlinearities in the channel of a field-effect transistor (FET).1 Terahertz radiation between the gate (G) and source (S) electrodes of a FET induces an AC field, giving rise to modulations in the carrier density and drift velocity. These oscillations generate a driving longitudinal electric field through the channel. If this simultaneous modulation of carrier density and drift velocity occurs in an asymmetric structure, a DC voltage signal, whose amplitude is proportional to the intensity of the incoming radiation, results at the drain (D) electrode (see Figure 1). The required asymmetry can be provided by shaping the S and D electrodes differently,2 by driving a current through the device, or by realizing an inherently asymmetric channel playing with material morphology, composition, or doping.3 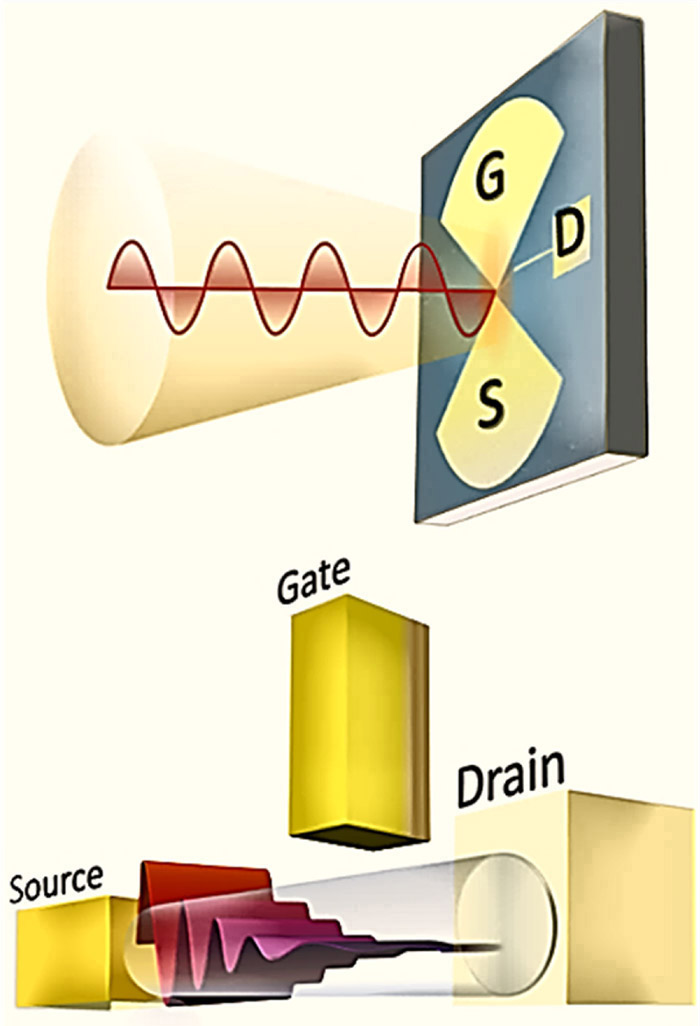 Figure 1. Terahertz (THz) detection scheme. A planar antenna couples the electromagnetic radiation to the source (S) and gate (G) electrodes of a nanowire field-effect transistor (NW-FET) (above). An electron density oscillation (plasma wave) is excited within the transistor channel, rectifying the AC external field (below).

The as-generated density oscillations are spatially limited by the plasma-wave propagation distance (damping length, Ld), which is proportional to the carriers' mobility. At room temperature, Ld is typically much smaller than the channel length, Lch, and the devices are said to be operating in an overdamped regime. The condition Ld≪Lch represents a crucial advantage for high-frequency detection: carriers do not have to cross the whole channel ‘following’ the THz electric field for rectification to take place. Therefore, detectors realized in FET architectures can operate well above their cut-off frequency and present higher sensitivity, above 1THz, than transit-time-limited detectors such as Schottky barrier diodes (SBDs). Furthermore, FETs typically show faster response times than thermal detectors such as Golay cells, bolometers, and pyroelectric detectors.4

A semiconductor NW is ideal for building specific functionalities in a FET: NWs can be assembled with specific compositions, heterojunctions, and architectures, promising advanced performance at dimensions compatible with on-chip technologies. For device optimization, as well as exploring material-related parameters, it is also crucial to critically address the coupling mechanism between a THz field and subwavelength NW-FET by investigating planar antennas.

These considerations enabled us to devise a set of THz detectors in which we integrated homogeneous indium arsenide (InAs), heterostructured InAs/indium antimonide (InSb), and gradient-like doped tapered InAs NWs, grown by chemical beam epitaxy, into laterally gated FETs coupled to the THz beam via bow-tie, split-bow-tie, or four-leaf-clover-shaped (FLCS) planar dipole antennas.5, 6 For each device, we measured responsivity (Rν) and noise equivalent power (NEP) in the 0.26–0.38THz range.

Homogeneously doped InAs NWs (see Figures 2 and 3) showed the best performance (responsivity Rν≈120V/W and NEP ≈ 100pW/ # Hz) for specific values of gate voltage corresponding to the best trade-off between carrier density tunability, low resistivity, and optimum FET-to-antenna impedance matching: see Figure 2(c, d). In these devices the FET structure is made asymmetric by connecting the two halves of a dipole antenna between the G and S electrodes or, more generally, by employing different geometries or metals for the S and D electrodes.5 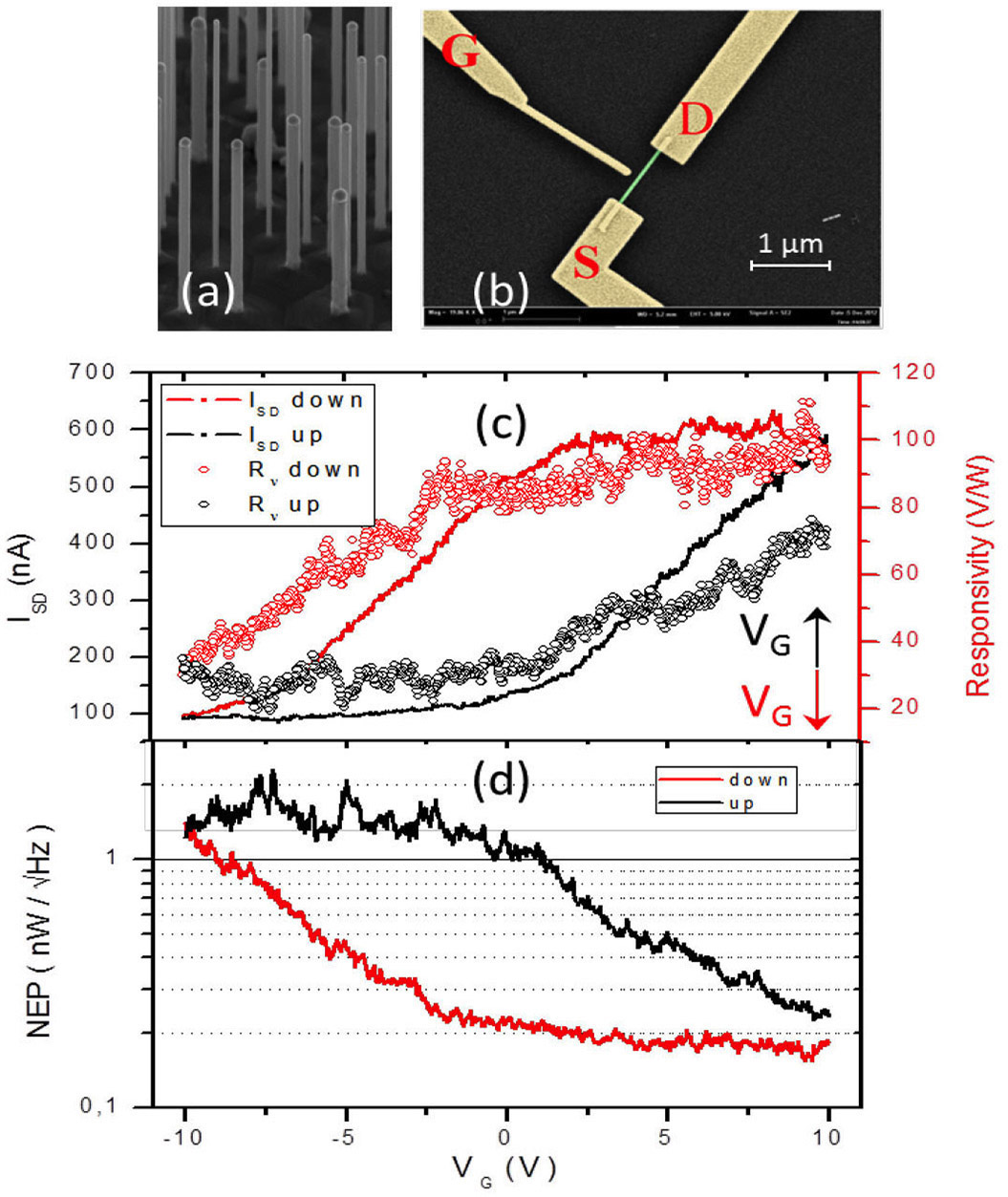 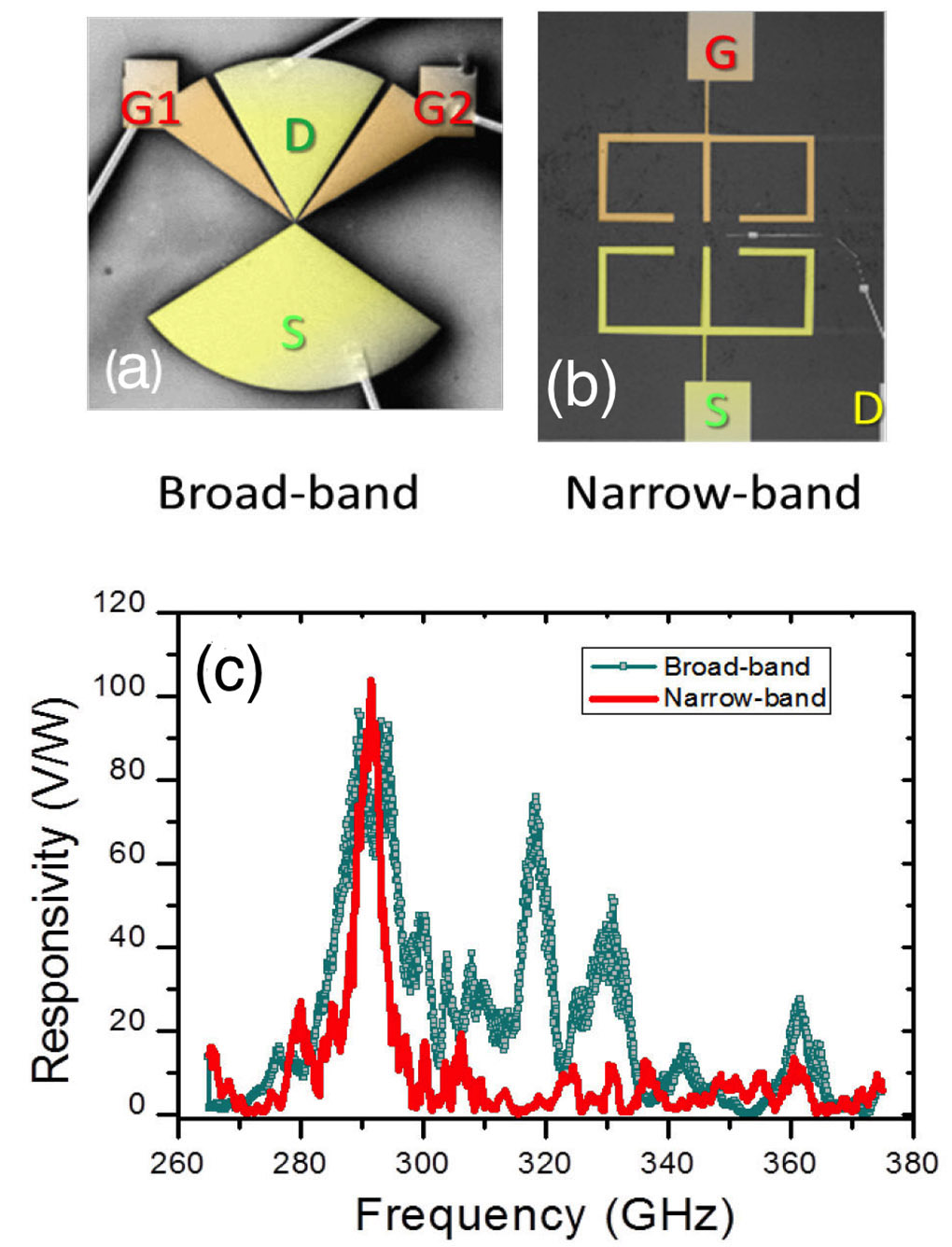 Figure 3. (a) A broadband split-bow-tie and (b) a narrowband four-leaf-clover shape designed to be resonant at 0.3THz, mounted on two (nominally) identical NW-FETs. (c) Plot of responsivity as a function of THz frequency: the detector spectral response is greatly influenced by the antenna choice.

Tapered NW-based FETs are able to detect THz radiation even though a symmetric dipole antenna is patterned on the S and D electrodes. In this case, the asymmetry is provided by the gradient-like doping along the NW, obtained by adding a progressively smaller fraction of donor selenium atoms to the InAs lattice. Engineering an NW-FET in a gateless configuration with a single terminal for the rectified signal readout is a promising way to develop a compact multipixel detection and imaging system.3, 5

In addition to the variety of functionalities provided by an accurate choice of materials, the frequency response of NW-FETs can be tailored by engineering the antenna design to address specific spectral requirements. This further functionality has been explored by equipping our devices either with broadband (bow-tie or split-bow-tie) antennas—see Figure 3(a)—or with frequency-selective resonant (FLCS) antennas: see Figure 3(b). Figure 3(c) shows the photoresponse of two nominally identical devices, featuring a double-gate bow-tie and an FLCS antenna, respectively, as a function of incoming frequency: the main peak in the FLCS antenna spectrum shows a full width and half-maximum narrower than that of the bow-tie antenna.5, 6 To provide a concrete exploitation of our technology, we then employed the device of Figure 4(a) in a transmission imaging experiment. The 0.33THz beam was focused on the target object, and the transmitted power was detected in photovoltage configuration while keeping VG=0 (all electrodes were unbiased). The 400 × 700 pixel image of the target object (a poppy flower) was acquired with a time constant of 10ms. The THz scan is reported in Figure 4. 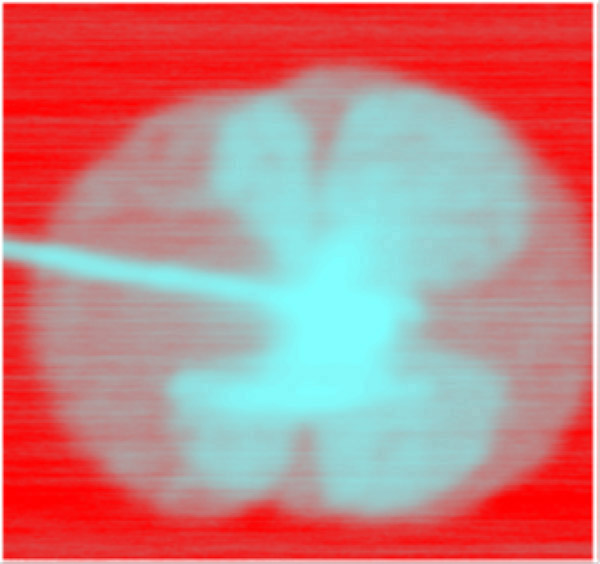 Figure 4. A false-color scan of the THz radiation transmitted by the corolla of a poppy flower, detected with the device shown in Figure 3(a) at a frequency of 292GHz.

In summary, by understanding the material-related parameters and antenna-related issues involved in realizing 1D NW-FETs, we have devised a powerful way to develop a novel generation of THz nanodetectors for high-resolution imaging and spectroscopy across the THz frequency range. The flexibility offered by semiconductor NWs makes them ideal active elements for the development of integrated multipixel THz arrays, promising to transform THz nanoelectronics. Taking advantage of the small capacitance, the flexibility offered by integrated nanoantennas, and the nanowire morphology/geometry, we are now working to develop compact arrays of nanowire THz detectors operating in the 1–5THz range.