Harvesting energy from waves is very challenging and the sector is still immature, with only a few pre-commercial systems in operation around the world. Existing wave energy converters (WECs) are complex and costly to construct, install, and maintain. They are also vulnerable to the marine environment (experiencing large impulsive loads and corrosion) and show limited energy conversion efficiency.

In this context, dielectric elastomer generators (DEGs) could provide the technological breakthrough that is required to make wave energy exploitable. DEGs are deformable capacitors made with incompressible elastic dielectric layers and compliant electrodes that can be used to convert mechanical energy into electricity by variable capacitance electrostatic generation.1 Potential advantages of DEGs over conventional technologies are: large energy densities, direct-drive and cyclic operation, good and rate-independent efficiencies, good shock and corrosion resistance, silent operation, and moderate-to-low cost.

We have investigated different concepts for DEG-based WECs2–5 and consider the polymeric oscillating water column (poly-OWC) the most promising. It performs well at capturing energy, is architecturally simple, and is applicable on- and off-shore, as well as along the shoreline (see Figure 1). The poly-OWC is an upgraded version of the turbogenerator-based OWC converter, which is currently the most studied and best developed type of WEC. 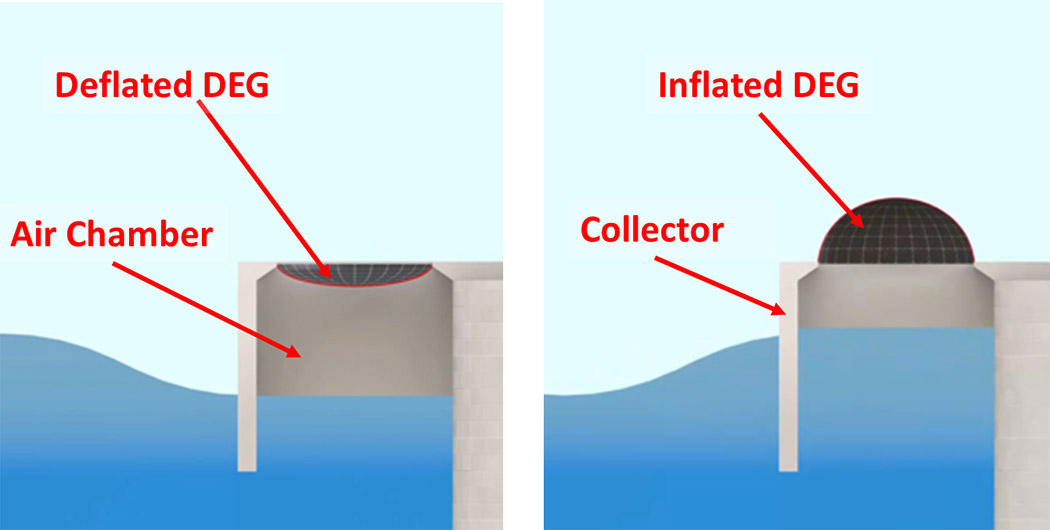 The poly-OWC features a semi-submerged hollow structure (hereafter called ‘collector’) that is open at the sea bottom to the incoming wave field and closed at the top by an inflatable circular diaphragm DEG. The collector is partially filled with water (namely, the water column) and air. As waves break on the structure, the water column is put into motion, which compresses/expands the air and hence inflates/deflates the DEG. Regulation of the charge residing on the electrodes during DEG deformation makes it possible to control the forces acting on the water column and, thus, to extract energy from waves and convert it into electricity.

Numerical simulation studies4 have demonstrated that a full-scale poly-OWC system, with collector dimensions equivalent to those of the OWC Pico Plant (installed in the Azores), can potentially produce at least the same amount of energy as that obtainable from a turbogenerator-based system. However, the required inflatable DEG is expected to cost at most one fifth as much as the turbogenerator, so (at current material and manufacturing values) the energy would cost much less.

We experimentally validated the expected energy capturing abilities of the poly-OWC device with small-scale tests in wave tanks.5 We tested an optimized fully-functional 1:40 scale model in a 2D wave flume under monochromatic conditions (see Figure 2). The model consisted of a fixed OWC collector (L-shaped and with an upper rectangular cross-section with edges 260mm and 360mm long) fixed to the sea bed and an inflatable DEG (125mm in radius and 93μm in thickness) made with an acrylic elastomeric dielectric and conductive grease electrodes. The system was capable of harvesting energy with an average power of 670mW for water waves with 4.5cm height and 0.7Hz frequency with a wave-to-wire efficiency close to 20%. Energy density for the DEG was up to 109J/kg. (That corresponds to an equivalent full-scale system average power of 270kW for waves with 1.8m height and 9s period.) These results were confirmed by experiments on a floating 1:50 scale poly-OWC model in a 3D circular wave tank (see Figure 3) which also demonstrated the functionality of the system under irregular sea conditions. 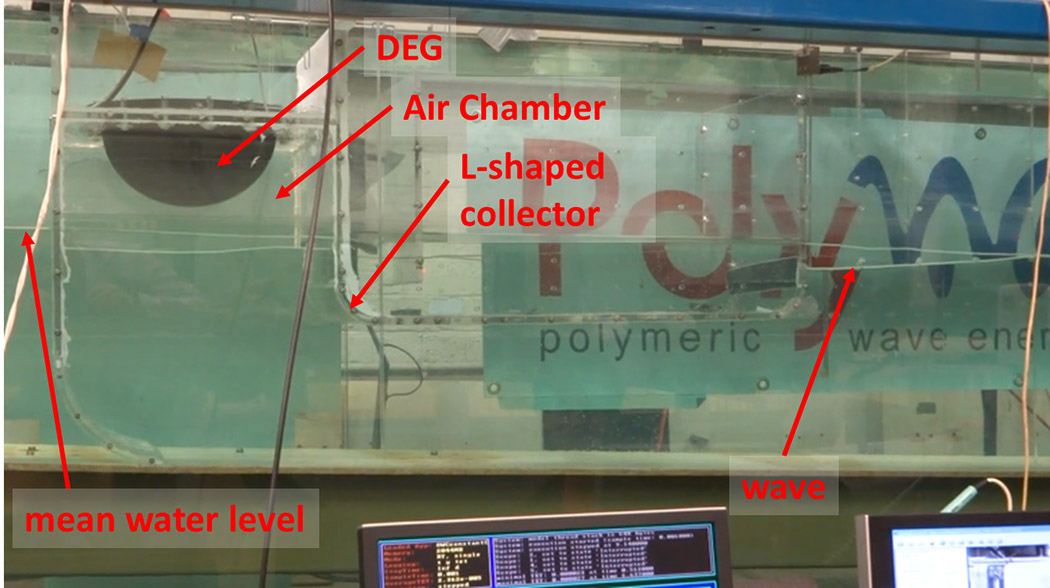 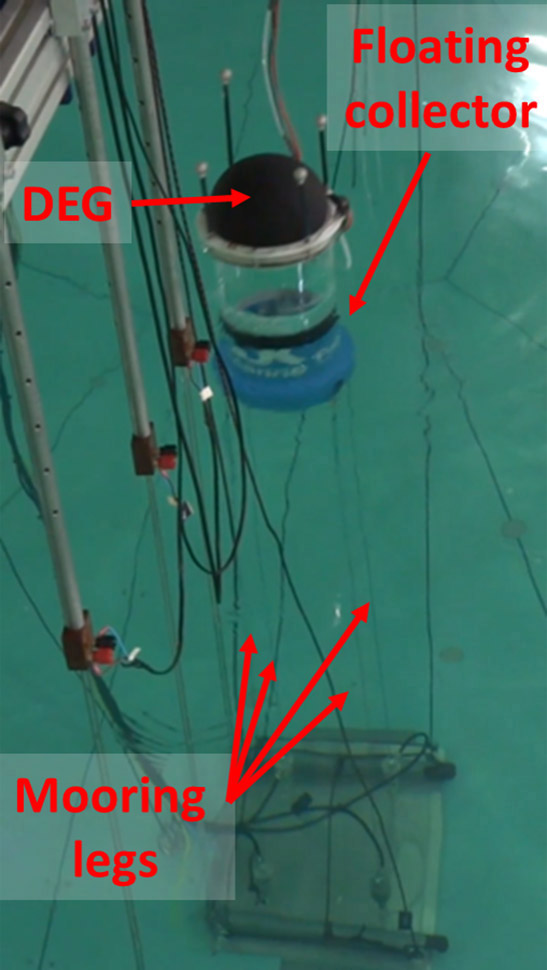 We are now developing a larger 1:35 scale model of the floating poly-OWC system for long-term tests in a 3D wave tank to assess scalability issues. We also plan to investigate lifetime performance and degradation issues of DEGs operating in marine environmental conditions. Additionally, we shall identify processes and procedures for manufacturing large DEGs (tens of square meters in area and of centimeters in thickness). Finally, we are also expecting to develop, deploy, and test small-scale (1:5 to 1:10) poly-OWC devices in benign sea test sites.

This research was undertaken as part of the European Union Seventh Framework Programme project PolyWEC (www.polywec.org) under grant agreement 309139.

Rocco Vertechy is an associate professor. His current research is mainly focused on mechatronic systems based on smart materials and compliant mechanisms.

Marco Fontana is an assistant professor and leads the ‘PERCRO-SEES’ group focusing on mechatronics and smart materials for renewable energy technologies.