Laser-induced breakdown spectroscopy (LIBS) is an emerging technique used in the recycling of solid waste to identify materials and analyze their composition. This technology may provide an accurate tool for assessment of the recycled material quality, which determines their suitability for high-grade reuse in new products and their potential market value. Equipment for LIBS is typically installed above a conveyor belt used for sorting or inspecting the quality of shredded materials (see Figure 1). Given the high speed of the belt (1–6m/s), there might not be enough time to take several samples and average them. We, therefore, need a technique that provides reliable results from a single sample. 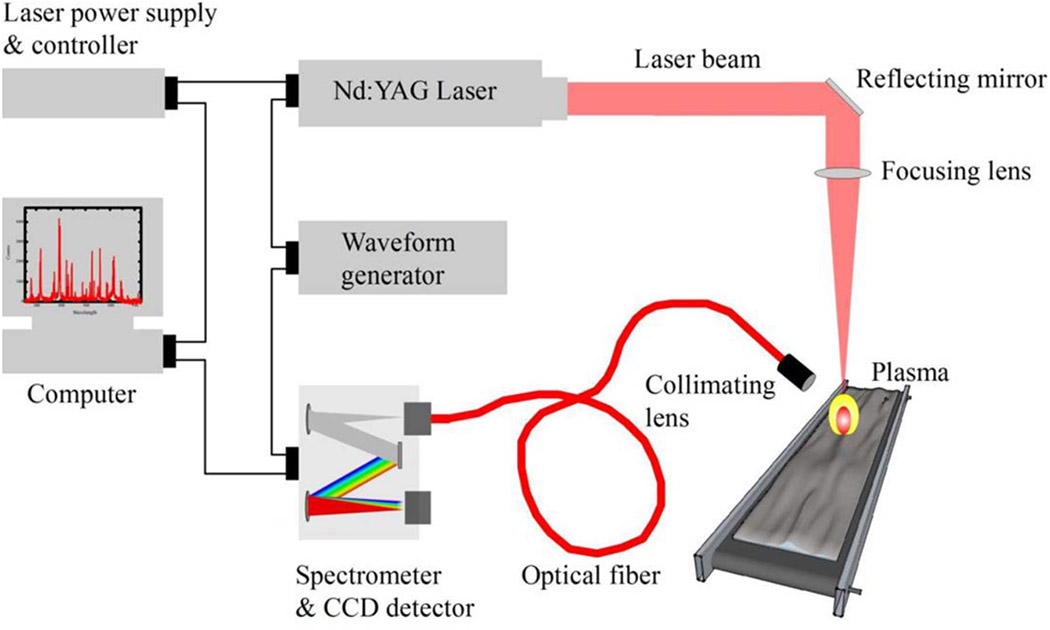 Figure 1. In a typical setup for laser-induced breakdown spectroscopy (LIBS) in recycling, equipment is placed above a conveyor belt for high-speed feeding of materials. Nd-YAG: Neodymium-yttrium aluminum garnet.

LIBS competes with established techniques such as near-IR spectroscopy and hyperspectral imaging, in which optical data also has to be translated into parameters of the target material. The advantage of LIBS is that a high-power laser pulse (>108W/cm2) samples a small amount of material and brings it into a plasma state before optical data is collected. In this way, the sample is first broken down into an ionized vapour consisting of atoms, ions, and electrons at extreme temperatures. This step makes LIBS less sensitive than other techniques to surface conditions of the materials, such as roughness or the presence of dirt, moisture, and oxides, and provides relevant information for reliable fingerprinting.

In LIBS applications, the use of nanosecond-pulse lasers is popular because of their low price and wide range of available pulse energies (from millijoules at hertz frequencies to microjoules at kilohertz frequencies), which offer a trade-off between the mass of material ablated per shot (i.e., the experiment of firing the laser and ablating the material) and the sampling rate. However, the drawbacks of these lasers are that they are less efficient and less predictable than those with shorter pulse durations, e.g., femtosecond lasers, owing to the effects of both molten matter and shielding by the vapor plume. The first of these effects may involve either the expulsion of molten material from the ablation crater by supersonic gases or boiling owing to superheating with the associated expulsion of molten lumps. Expulsion rates depend on the laser fluence (J/cm2), but are poorly reproducible and accordingly contribute to pulse-to-pulse variations in the observed LIBS spectrum. If the laser pulse lasts longer than is needed to ablate the material that is needed to form an opaque plume, the plume is reheated. That is, the remaining laser pulse energy increases the plume temperature and ionization rate, which enhances the photonic emissions.

The physics of pulsed-laser-induced ablation is undeniably complex. However, from a fundamental point of view the processes involved may be well understood when analyzed under (quasi-)stationary conditions or if local equilibrium conditions are assumed. On this basis, several models have been proposed in the literature1 to explain these processes qualitatively. The main challenge remains to quantify transient processes and the related photonic spectrum while dealing with poorly documented properties of compounds in different phases under extreme pressures and temperatures.

Quantitative methods use selected atomic and ionic spectra obtained by time-gating a spectrograph. These parts of the spectrum are dominant when the plume becomes optically thin and the continuous radiation spectra associated with a denser, opaque plume fade away. However, the continuous part of the spectrum is also colored as it inevitably depends on the available energy states and probable transitions, which are determined by the type and amount of the ablated material. We have successfully applied this information in a recent technique for fingerprinting building waste that uses the whole LIBS spectrum.2 A promising extension to this method would be to use time-resolved spectra.

As well as fingerprinting for characterization of materials, the application of LIBS in recycling is to identify minority elements or compounds, e.g. alloying elements in metals or additives in plastics. This measurement requires calibration using either an internal standard or prepared samples to relate spectral emissions to known contents. A major drawback with applications in recycling is the need for matrix-dependent calibration, as mixed waste materials can exhibit a wide variety of compositions. We are currently investigating three aspects of matrix dependency at Delft University. Firstly, we aim to acquire more knowledge about the relationship between material composition and the mass ablated per shot. Ideally, we will be able to measure the depth and size of the crater by in-line methods after each shot, but this poses formidable challenges. The second aspect is what we call the ‘pressure cooker effect’. To demonstrate this, we distributed lithium nitrate in three matrices with decreasing breakdown thresholds: demolition concrete, cement, and calcium hydroxide. The main rationale for this approach is that when breakdown occurs in a matrix with higher breakdown threshold, salt crystals in the mass being ablated will already have vaporized. Thus, the dissociated minority species has a higher probability of reaching high ionization rates in the plume. Figure 2 shows that the stronger the matrix is (i.e., the higher the silicon content), the higher the sensitivity for the minority compound will be, which agrees with the pressure cooker effect. 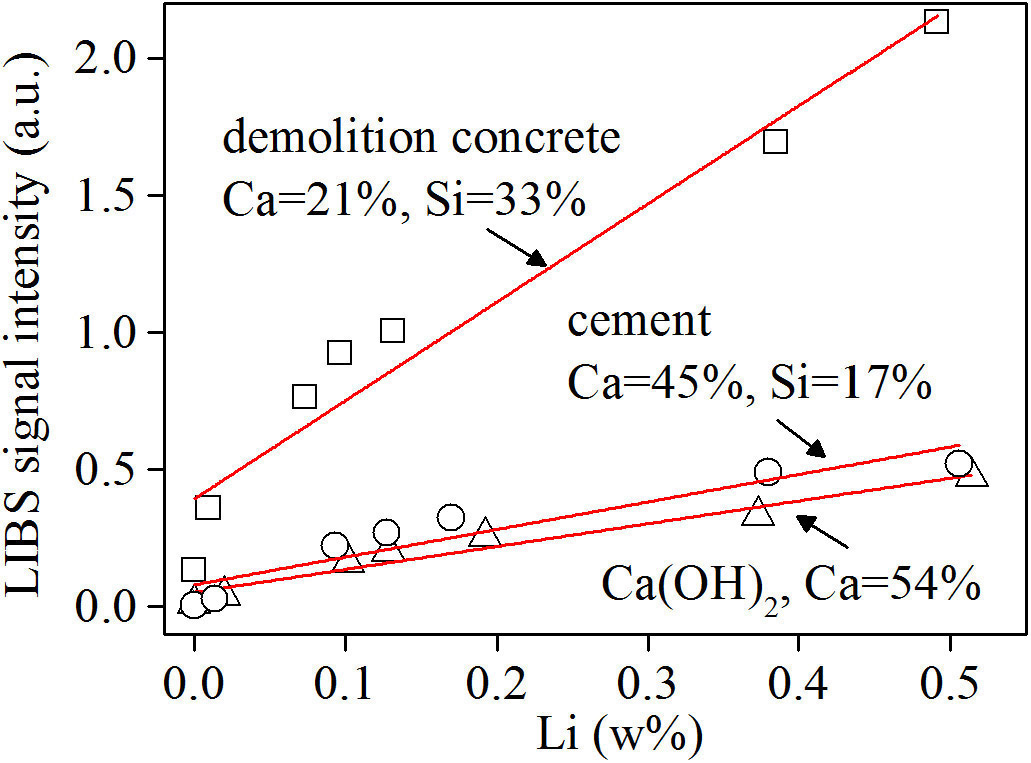 The final objective of research in recycling is a robust calibration-free method.3 Ideally, this should require no more than a few easily detectable spectral emission lines. With this aim, besides appropriate selection of the power and wavelength of the laser, we must pay attention to developing a robust descriptive model to explain the observed intensities of the selected emission lines in terms of the content of the target material.

Maarten Bakker has a background in electrical engineering and a PhD in acoustic inspection techniques. He undertook research in sensor-based recycling after a career in non-destructive testing in civil and aerospace engineering. He is the author of some 30 scientific publications and co-holder of three patents.

Han Xia holds an MSc in physical technologies from Clausthal University of Technology. As a PhD candidate, he is currently investigating the material-dependent properties of LIBS with the aim of developing a more-robust technique for the identification of materials in recycling.