A small and inexpensive sensor system detects a variety of target molecules in the air with very high sensitivity and good selectivity.
05 May 2015
Drago Strle, Bogdan Stefane and Igor Muševič

Detecting vapor traces of molecules in the atmosphere is necessary in security, medicine, environmental control, food production, science, and the military. Detection is difficult, because the number of target molecules can be as little as one in 1012 air molecules, and these may have adsorption characteristics similar to air1 and to other molecules around the sensor.

There are various bulky and expensive instruments for vapor trace detection, most of which require a trained operator and are time-consuming to use. Furthermore, false detections are very likely because of the small number of target molecules in the atmosphere.

We have designed a small and inexpensive detection system comprising an array of functionalized differential comb capacitive sensors1–3 implemented in a modified microelectromechanical system process, and an extremely sensitive electronic detection system implemented in a 0.18 binary-coded decimal process.4 Detection is based on adsorption of target molecules to the functionalized surface of the comb capacitive sensors,5 changing the relative dielectric constant of one capacitor in a differential pair (see Figure 1).

The surface of the capacitors selectively adsorbs different molecules, and after a short time, the molecules desorb. Adsorbed target molecules change the relative dielectric constant of the modified capacitor in the space between the plates, and therefore also the capacitance. We measure this extremely small change using a highly sensitive electronic detection system. The method is robust, inherently insensitive to temperature and mechanical noise, and is CMOS-compatible. We aim to improve the inherent problem of poor chemical selectivity of individual sensors by introducing an integrated array of up to 64 differently functionalized capacitive sensors (currently only four are integrated), thus mimicking the architecture of a dog's nose (one of the best molecular detection systems in nature). Each molecule adsorbs differently on the various functionalized surfaces, changing its dielectric constants, and this imprints a unique signal fingerprint to the measurement results from the array of the comb microsensors.

Currently, our four-sensor integrated array has differently functionalized capacitive comb sensors and a one-channel, low-noise6, 7 analog integrated electronic circuit in the system-in-package (see Figure 2). The digital signal processing part of the electronics is implemented on the field programmable gate array, but can easily be integrated. Figure 3 shows the complete measurement system and its primary modules. 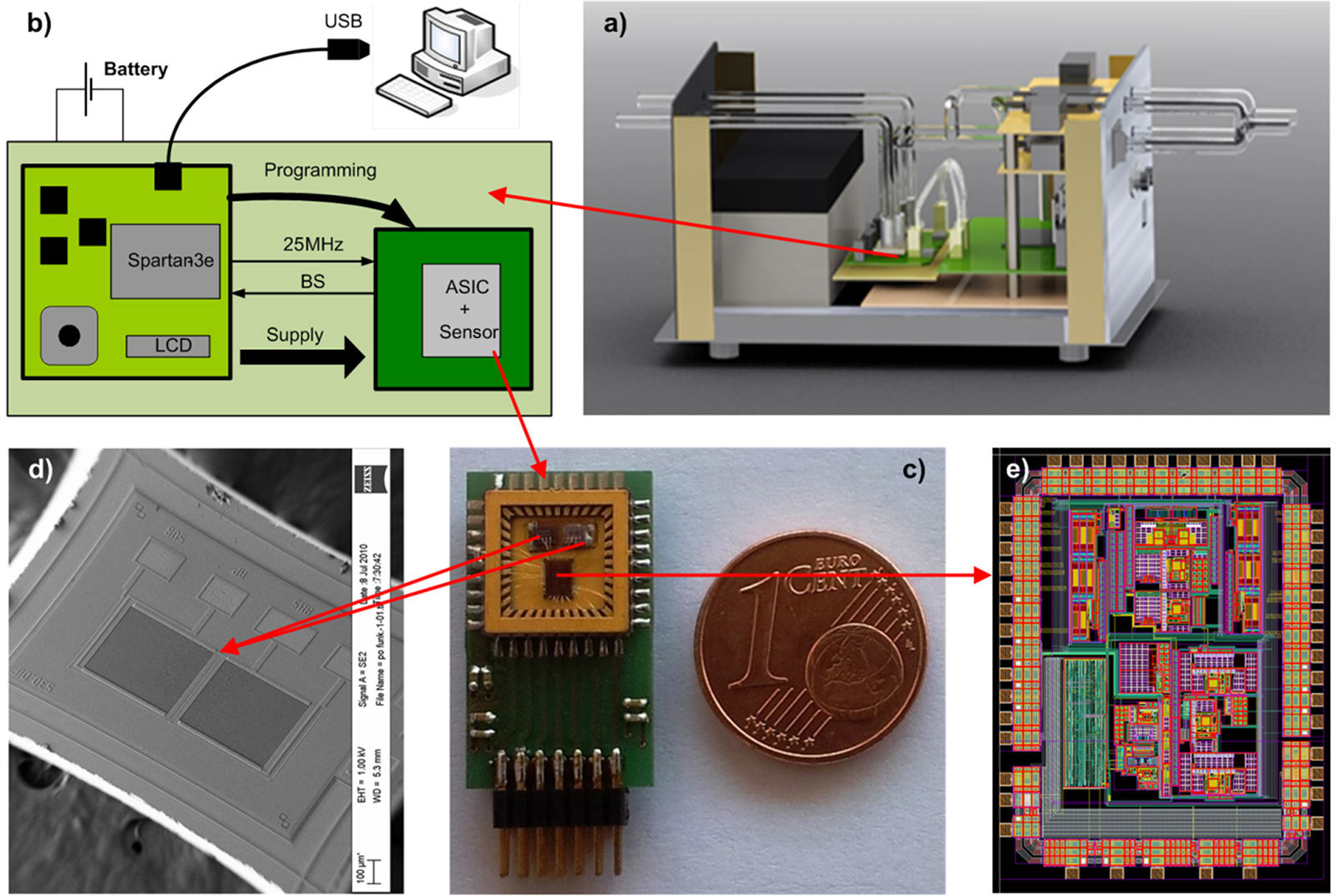 The sensitivity of the electronic measurement system is better than 0.3aF in 1Hz bandwidth (1aF is 10−18F), which leads to the detection limit of three parts per trillion for TNT in a laboratory environment (three molecules of TNT in 1012 molecules of nitrogen) at room temperature and at normal pressure. In addition, we have shown that varyingly functionalized sensors react differently to the same target molecules. Figure 4 shows measurement of detecting RDX vapors (explosive nitroamine) in the air using four differently modified sensors.1 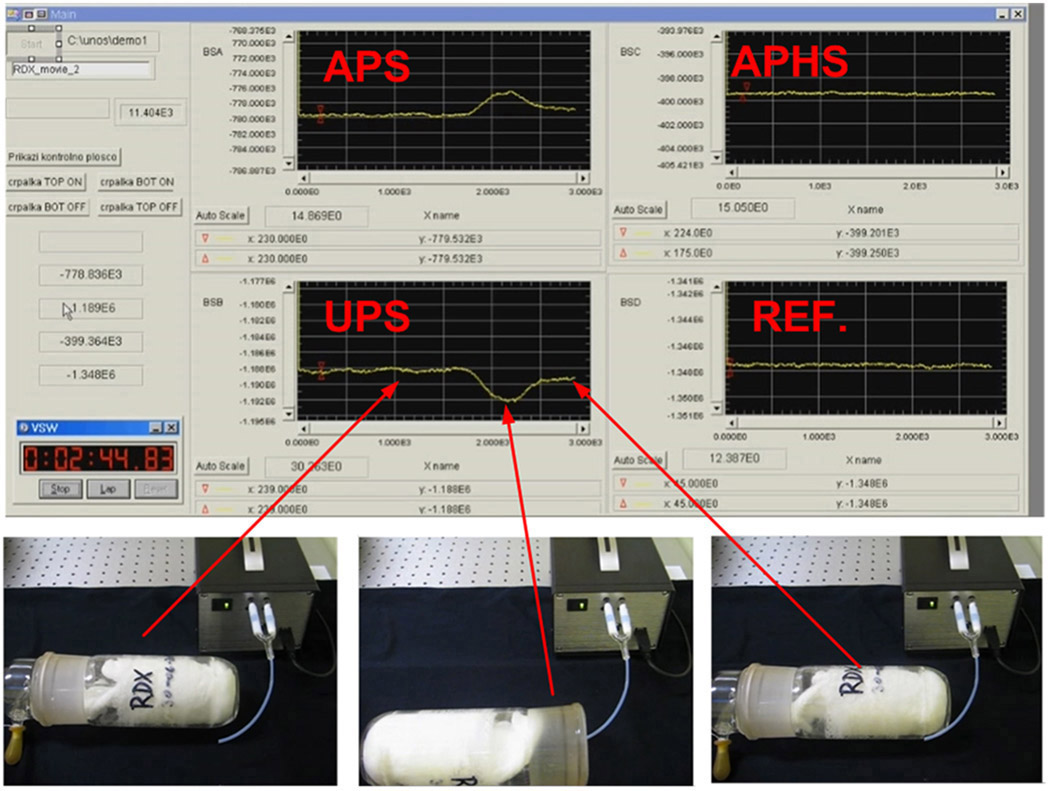 Figure 4. Measured responses of the four modified sensors to RDX vapors (explosive nitroamine) in the air. The sensors were differently modified (the meaning of the modification names APS, APHS, UPS, and REF. is explained elsewhere1).

Detecting vapor traces of different molecules in the atmosphere is potentially a powerful method for revealing the presence of various substances. We have demonstrated a miniature system capable of detecting the vapors of different explosives. It is sensitive, selective, consumes a minimal amount of energy (15mA at 5V), is small and inexpensive to produce in large quantities, and is insensitive to mechanical influences. In future, we plan to miniaturize the detection system and further improve its sensitivity by integrating up to 64 differently modified sensors. This could lead to a miniature, cheap, and very selective detection system that could be widely deployed for detection of hazardous molecules in air.

This research was supported by the Ministry of Science and Technology, Republic of Slovenia, ARRS (Slovenian Research Agency) grant J7-5497, and the Center of Excellence NAMASTE.

Drago Strle has more than 30 years' experience in designing low-noise, high-performance sensor interface circuits. Currently, he is associate professor in the Faculty of Electrical Engineering.