A superconducting photon-counting receiver for optical communication from the Moon

NASA explorations and mission support in near- and deep-space require data rates greater than those currently available. The Deep Space Network—an international communications system to support spacecraft missions—uses state-of-the-art radio frequency (RF) technology for free-space networks (those transmitting data through space rather than through solid structures such as optical fiber cables). A free-space communications network based on optical technology and techniques offers data rates that are orders of magnitude higher than RF. Additionally, optics-based technology is smaller, lighter, and less power-consuming than RF, a particularly important feature for resource-starved satellite terminals.

To exploit these advantages, for the past five years NASA has been moving from laboratory demonstrations to a real system, commissioning the Lunar Laser Communication Demonstration (LLCD). The project comprised an optical terminal in space, the Lunar Lasercom Space Terminal (LLST)1 (see Figure 1) launched as a payload on the Lunar Atmosphere and Dust Environment Explorer (LADEE), and a primary transportable ground terminal—the Lunar Lasercom Ground Terminal (LLGT2)—stationed at White Sands, New Mexico. There were also two alternate terminals, one at NASA's Jet Propulsion Laboratory Optical Communications Telescope Laboratory at the Table Mountain facility in California, and one at the European Space Agency's Optical Ground System in Tenerife, Canary Islands. The primary LLCD lasercom link operated in the 1.5μm band with two-way communications: an uplink at 10 or 20Mb/s, and a downlink at selectable rates up to 622Mb/s. The LLST launched 7 September 2013 from Wallops Island, Virginia, reaching its final orbiting phase ∼250km above the lunar surface in early October. During the following month, error-free optical uplinks and downlinks were established between the LLST and the LLGT. This laser communication link of ∼230,000km was the longest ever built, and demonstrated the highest communication data rates ever achieved to or from the Moon. Additionally, the system used structured data symbols and some additional hardware to achieve continuous measurements of the round-trip time-of-flight with much less than 200ps resolution or, when converted to range information, 3 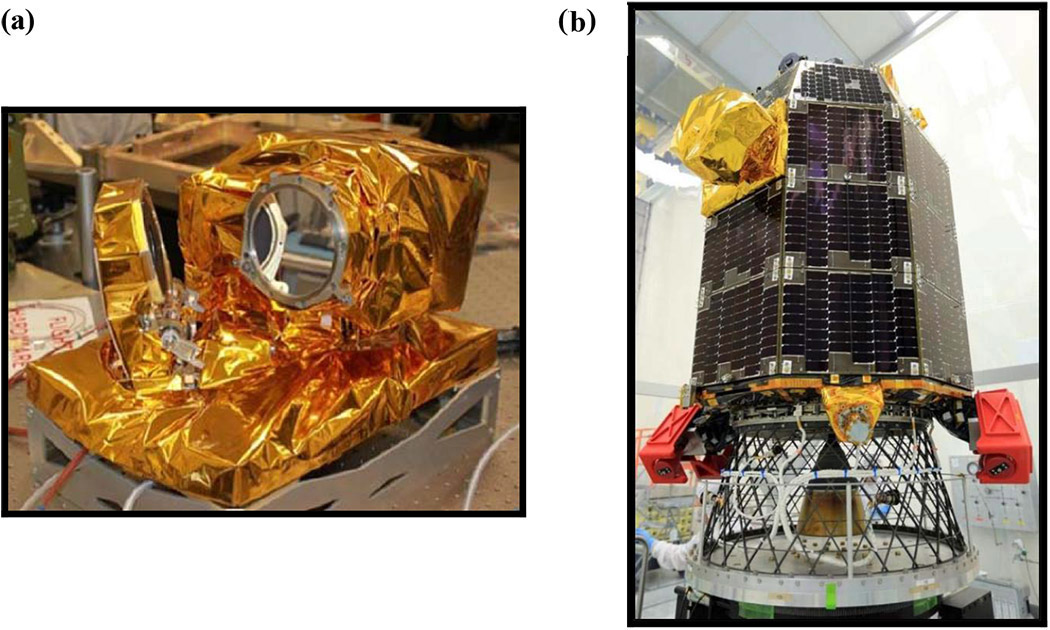 Light from the LLST was collected at the LLGT terminal in White Sands, New Mexico, in four 40cm telescopes co-located on a gimbal mount. Each telescope was coupled to a custom multimode weakly polarization-maintaining fiber that was then focused onto a four-element array of niobium nitride (NbN) superconducting nanowire single-photon detectors (SNSPDs). Such detectors are based on narrow semimetal superconductors operating below their critical temperatures with a constant current biased just below the critical current. When a single incident photon is absorbed in the nanowire, the superconducting current is disrupted and results in a finite resistance that can be measured as a voltage pulse in the output before the nanowire quickly relaxes to its superconducting state. SNSPDs have been available since 2001,4 but for the LLCD program, some advancements were needed to achieve high system photon detection efficiency (PDE) and low reset times to support the 622Mb/s data rate, including an understanding of impairments due to nanowire constrictions, leading to improved device yield and PDE.5 The design and construction of optical cavities was also modified to improve photon absorption and PDE,6 as well as the design of interleaved arrays to increase the counting rates.7 An understanding of circuit latching8 was developed, and wideband high-impedance readout circuits9 were implemented to enable high-speed operation. The 80nm-wide nanowire devices were fabricated at the Massachusetts Institute of Technology's Lincoln Laboratory using e-beam lithography on NbN films grown on silicon/silicon dioxide substrates. The nanowires formed a 14μm-diameter circular meander pattern with four independently biased interleaved nanowires, which were placed in an optical cavity (see Figure 2) to achieve a PDE of ∼75%. The SNSPD arrays were maintained at a base temperature of 2.7K in a two-stage closed-cycle cryogenic refrigerator (see Figure 3). The downstream electronic stages for amplification, thresholding, multiplexing, demodulation, and decoding10 were housed in racks next to the refrigerator, and all were housed remotely from the telescopes and linked by the custom multimode fiber. 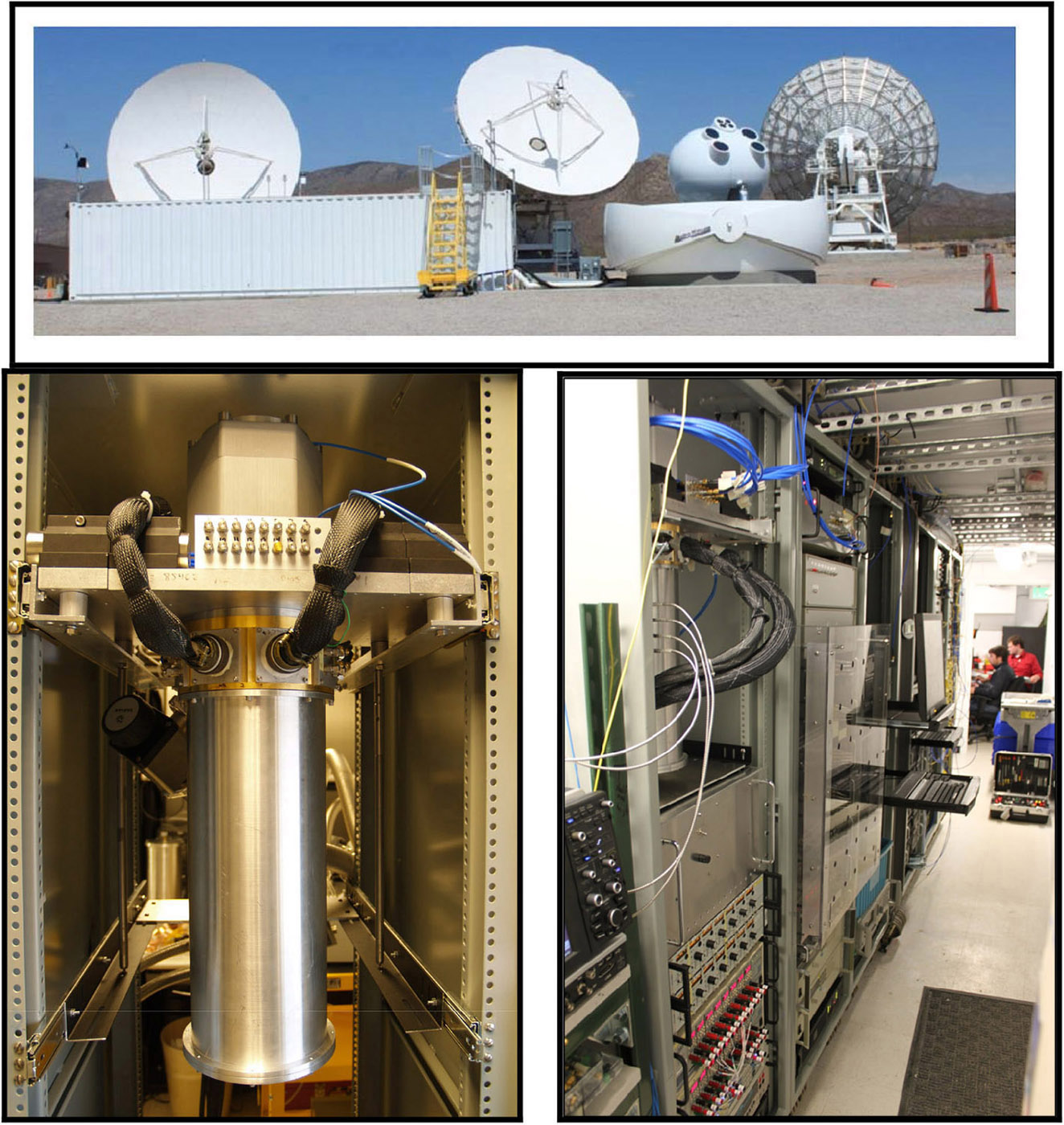 In summary, the LLCD achieved an error-free downlink at rates up to 622Mb/s from the LLST terminal on a lunar-orbiting satellite to the LLGT terminal on Earth using a photon-counting receiver based on NbN superconducting nanowires. This demonstration constituted the longest-range laser communication link ever built and the highest communication data rates ever achieved to or from the Moon. Based on the success of LLCD, NASA is preparing the deployment of optical terminals as part of the Laser Communications Relay Demonstration (LCRD) to launch in 2017 as another stepping stone enabling high-rate laser communications for mission-critical space operations.

Matthew Grein earned his BS at Texas A&M University and his MS and PhD at MIT, all in electrical engineering. He has since joined Lincoln Laboratory as a technical staff member pursuing various topics in nonlinear optics, optoelectronics, and superconducting nanowires.