The plasmonic-electrical effect can be used to shorten the transport path of low-mobility carriers and overcome the space-charge limit in organic semiconductors.
19 May 2015
Wallace C. H. Choy

We have shown previously that plasmonic metal nano-materials and nanostructures can be incorporated into different active regions of organic solar cells (e.g., the organic/polymer-based active layer) in photovoltaic applications.6–8 Alternatively, the nanomaterials and nanostructures can be included as part of the carrier transport layer in organic solar cells (OSCs).9 In both cases, the inclusion of these novel materials enhances light trapping properties. We have recently introduced the theory of a new so-called plasmonic-electrical effect—where plasmonically induced photocarriers are redistributed—and have experimentally demonstrated this effect.10 Due to the plasmonic-electrical effect, the transport path of typical low-mobility holes can be shortened, and the SCL of organic semiconductors can be broken.11

To demonstrate plasmonic-electrical effects, without involving complicated device structures, we have integrated three structural and material configurations into OSCs. First, to achieve unbalanced electron/hole mobility, as well as a low hole mobility to favor SCL effects, we used a poly-3-hexyl thiophene:phenyl-C61-butyric acid methyl ester (P3HT:PCBM) active layer (annealed at 150°C for 30 minutes). Second, to demonstrate SCL effects, we adopted OSC inverted structures with a long hole transport path. Finally, to illustrate the plasmonically-modified SCL effect, we integrated a metallic nanograting as an anode. Using these three structural and material configurations, we have built two OSC device (planar and grating) structures (see Figure 1). In the grating-inverted device, the plasmonic-electrical effect will increase the number of electrons and holes generated near the grating. These holes will have a relatively short path to the anode, which will alleviate the SCL. 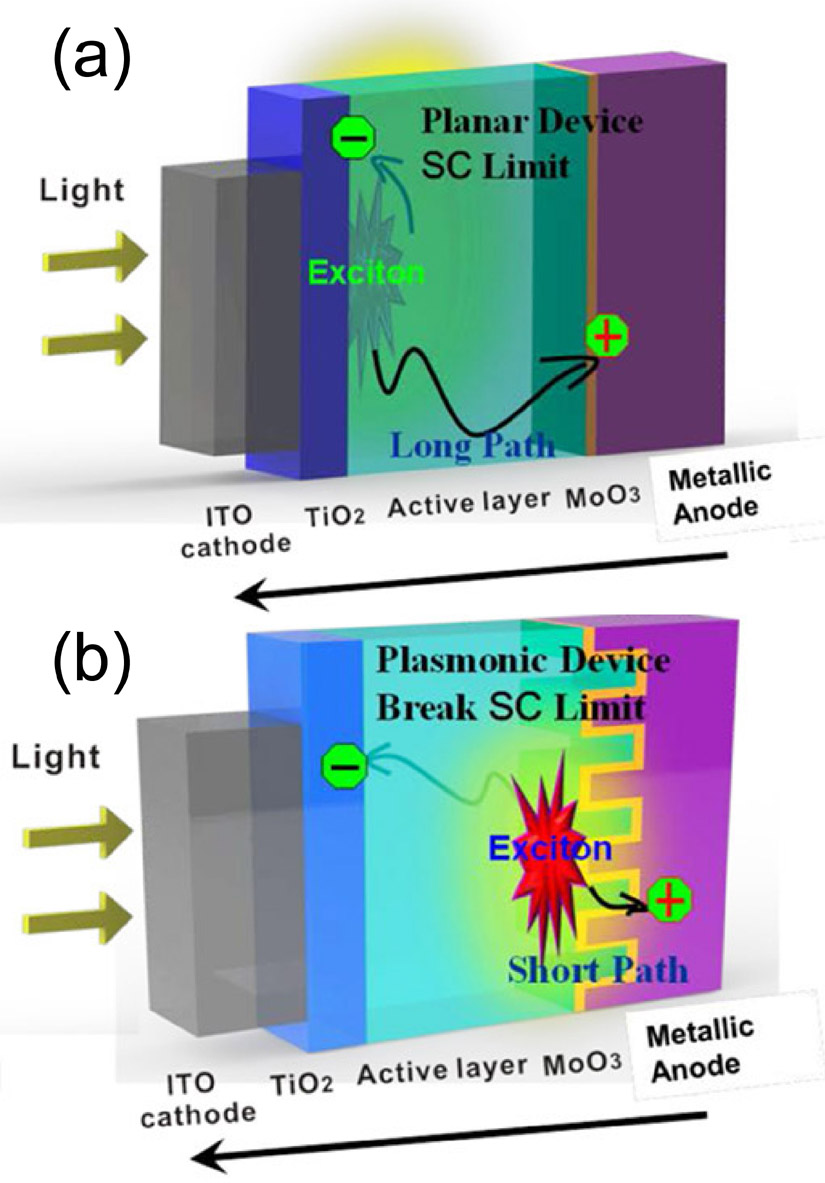 Figure 1. Schematic illustrations of (a) planar-inverted and (b) grating-inverted organic solar cell (OSC) devices.11The planar device consists of a 70nm indium titanium oxide (ITO) layer, a 20nm titanium oxide (TiO2) layer, a 220nm poly-3-hexyl thiophene:phenyl-C61-butyric acid methyl ester (P3HT:PCBM) active layer, a 10nm molybdenum trioxide (MoO3) layer, and 100nm of silver or gold. Space-charge-limit (SCL) characteristics arise from the long transport path of a hole (+). The grating-inverted OSC has a similar structure, but with a grating included in the 220nm P3HT:PCBM layer. The SCL is overcome due to short transport paths for holes, which can be controlled using the plasmonic-electrical effect. SC: Space charge.

We have studied the SCL characteristics of silver (Ag) planar-inverted and grating-inverted OSCs. We measured the photocurrent (Jph) under various incident light intensity and effective applied voltage (V0–V) conditions at room temperature (see Figure 2). For the Ag-planar-inverted device, when V0–V is less than 0.2V (i.e., a low internal electrostatic field), the approximately proportional (linear) relationship between Jph and V0–V is mainly governed by diffusion and drift current effects. As the internal field starts to increase, a square-root dependence of Jph on V0–V emerges, as seen in Figure 2(a). When the internal field increases even further (i.e., under sufficiently high reverse voltage), Jph becomes saturated (independent of internal field) and recombination does not occur. This indicates that the mean drift length of free-charge carriers becomes equal to, or larger than, the active layer thickness at this point. Our results show the dependence of Jph on V0–V and reveal the transitions of current type (from diffusion- and drift-current, to SCL-limited-current, and finally saturated-current with no recombination). To verify SCL occurrence in the Ag-planar-inverted OSC further, we plotted Jph as a function of light intensity at four different V0–V values, as shown in Figure 2(b). Our results clearly show that the space-charge effect occurs in the Ag-planar-inverted device and that it dominates the electrical properties of the device. 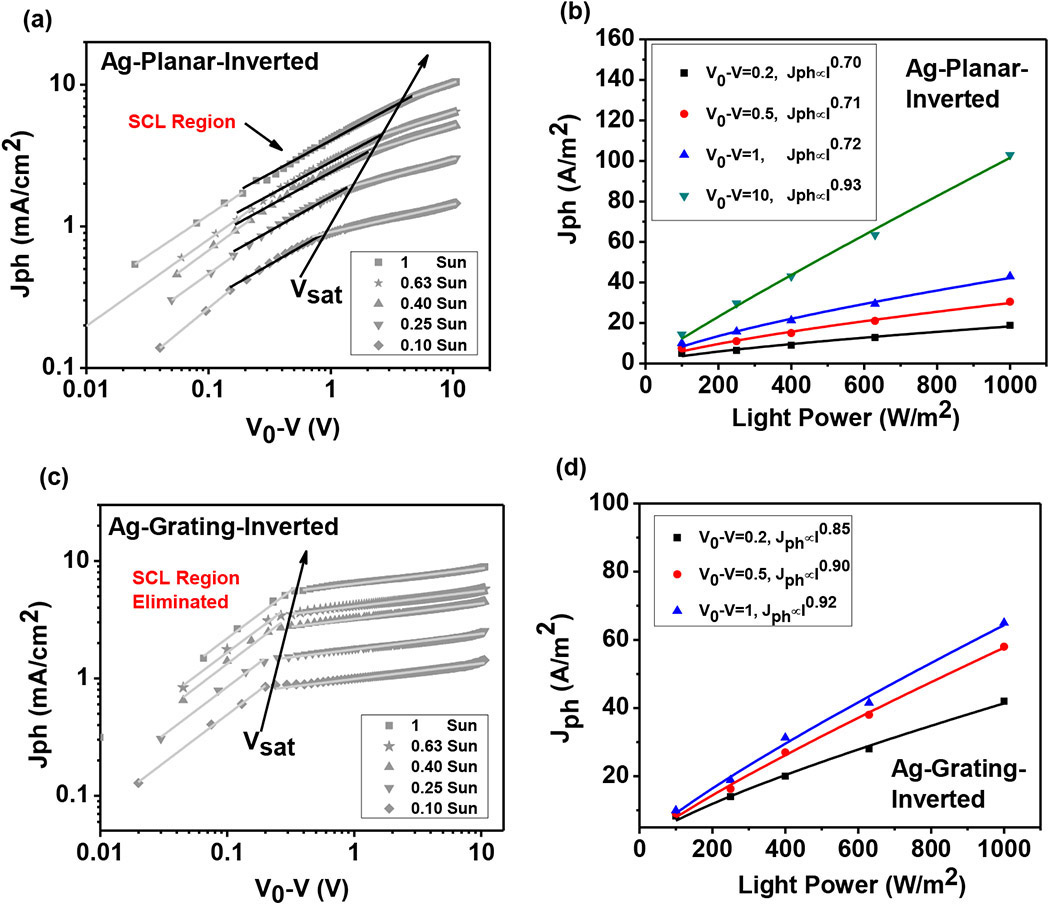 When we incorporate a metallic grating anode into a Ag-grating-inverted OSC the SCL characteristics disappear, as shown in Figure 2(c). More specifically, when V0–V is less than 0.2V, Jph is about linearly proportional to V0–V (i.e., there is no difference in behavior to the Ag-planar-inverted device). When the internal field increases, however, Jph becomes saturated and it does not display a square-root dependence on V0–V. We have plotted Jph as a function of light intensity for different values of V0–V in Figure 2(d) to facilitate a direct comparison with the results shown in Figure 2(b). We observe a linear dependence of Jph on light intensity, which provides further evidence that the SCL effect has been eliminated and bulk recombination has been reduced.

By rigorously solving Maxwell's equations,12 we have calculated the ratio of exciton generation in the Ag-grating-inverted device to that in the Ag-planar-inverted device. We find that there is a similar distribution pattern for two types of polarized light (p-polarized and s-polarized). Plasmonic effects therefore play a dominant role in increasing total exciton generation. We also found self-consistent solutions of semiconductor equations (i.e., Poisson, drift-diffusion, and continuity equations). These results indicated that the effectively-shortened transport path of holes (i.e., as a result of the grating) avoids the SCL effect in the Ag-grating-inverted device, even if the same active layer thickness is used in both devices.

We have demonstrated, both theoretically and experimentally, that the SCL can be broken within inverted OSC devices by the proposed plasmonic-electrical effect. We have conducted tests that show the linear dependence of photocurrent on light intensity and a significant improvement in fill factor. The shortened transport path of low-mobility holes (a result of plasmonically induced light absorption redistribution), reduced bulk recombination, and reduced space-charge accumulation are the main causes of the SCL breaking for inverted OSCs that have a metallic nanostructure anode. The plasmonic-electrical concept that we have proposed can be used to improve the performance of semiconductor devices that have active materials with unbalanced mobility. New approaches to enhance the optical and electrical properties of optoelectronic nanodevices can thus be facilitated. In particular, we plan to explore the plasmonic-electrical effect on different organic devices and to investigate their potential applications.

Wallace C. H. Choy obtained his PhD in electronic engineering from the University of Surrey, UK. He subsequently worked for the National Research Council of Canada and then Fujitsu in California. He is now an associate professor in the Department of Electrical and Electronic Engineering. He has published more than 140 journal papers, edited and contributed to several books, and holds US and China patents. In 2014 he was recognized as one of the top 1 of scientists in the field of materials science, based on Thomson Reuter's Essential Science Indicators. He is also a topical editor for the Journal of the Optical Society of America B and an associate editor for IEEE Photonics Journal.