Transmitter and receiver terminals for aeronautical optical communications were developed and a laser link between a jetfighter and a ground station was demonstrated.
02 July 2015
Florian Moll, Christian Fuchs and Joachim Horwath

Current and future airborne high-resolution cameras and radar systems produce a large volume of payload data. In many cases, such as reconnaissance and surveillance missions, there is a demand to download these huge data sets from an airborne platform to a ground station during a flyby. This requirement entails very high transmission rates. Optical communication systems can satisfy this need better than classic radio frequency (RF) systems. Furthermore, this technology can outperform RF systems in terms of lower SWaP (size, weight, and power) and has the advantage of free and unregulated spectrum use.

To show the potential and maturity of the technology, we demonstrated a high-rate optical downlink from a fast-flying jetfighter to a German Aerospace Center (DLR) ground station. The maximum speed was 0.7 Mach, and the data rate was 1.25Gb/s. A qualified dense wavelength division multiplexing (DWDM) transceiver was used to show compatibility with standard components from fiber communication technology. The experiment was conducted within the framework of the Demonstration of Optical Data link fast (DODfast) project, a collaboration between the DLR Institute of Communications and Navigation, Airbus Defence and Space, and ViaLight Communications. The air carrier was a Panavia Tornado, and the ground station was the DLR's transportable optical ground station (TOGS). The purpose of the demonstration was to show the feasibility of high-rate bulk data transmission during a short aircraft flyby. In support of this goal, we developed highly engineered optomechanical communication terminals featuring robust beam steering and short acquisition times. The demonstration flights were prepared and conducted together with the Bundeswehr Technical and Airworthiness Center (WTD 61) in Manching.

What distinguishes our demonstration from others is the fast flight speed and integration of the data transmitter—the Micro Laser Terminal 20—into a jetfighter aircraft (see Figure 1). We also deployed an easily transportable optical ground station (TOGS, see Figure 2). We achieved data transmission over a distance of 50km and active beam tracking up to 79km. A detailed description of the experiment and results is provided elsewhere.1 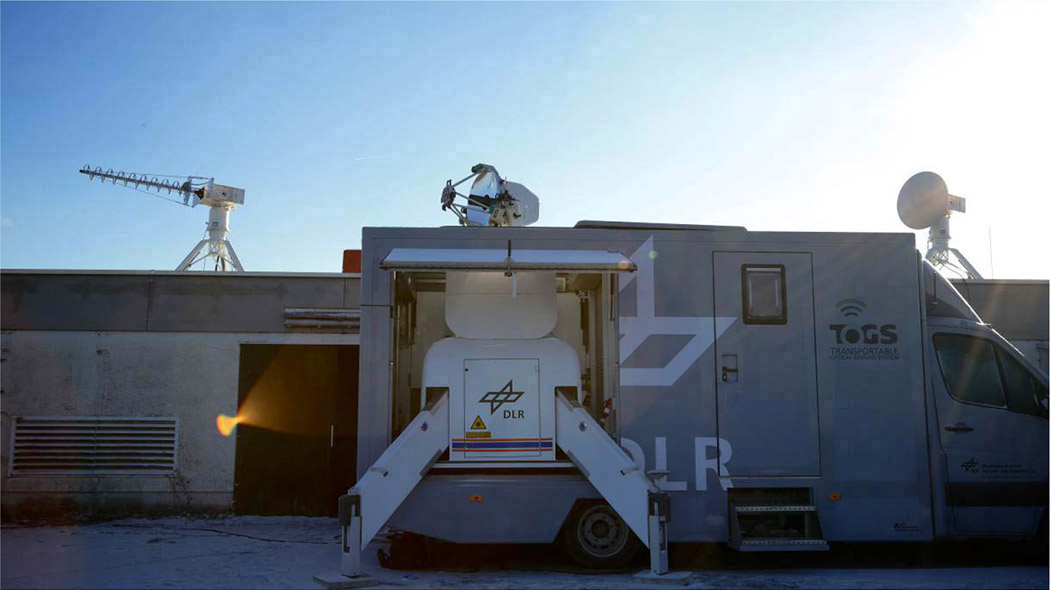 Figure 2. Image of the transportable optical ground station (TOGS) setup at the test site. The TOGS telescope is unfolded and stands together with its van in front of the laser link ground command center. The TM/TC (telemetry/telecommand) up- and downlink antennas are located on the rooftop of the building. (Source: German Aerospace Center.)

For the terminal design, we employed a fuselage integrated concept as explained in a previous report2 of an experimental system. The terminal is integrated into the aircraft body, with only a small glass dome exposed to the airstream—see Figure 2, top right—which protects the coarse pointing assembly (CPA), a compact beam steering device. This highly agile and precise actuator was developed by DLR and is the central part of the optomechanics. It makes use of hollow shaft torque motors and features unlimited motion in the azimuth. A margin of –20° in elevation enables seamless communication even during aircraft maneuvers involving high bank or pitch angles up to this limit. The aperture optics are designed such that the field of view has no blind spot. All devices, including the custom encoders, have been tested beyond military standard requirements. During qualification, the CPA fulfilled all requirements with regard to vibration and shock without need for further modification, and has proven its reliability during flight tests.

Previously published reports contain additional information on the aircraft terminal and the TOGS.1, 3 Next steps will focus on improving the actual implementation and system design of the ground station and airborne terminal, with particular attention to ensuring higher data rates and the robustness of the link. Transmission rates on the order of 40Gb/s will enable us to fully exploit the capabilities of aeronautical laser communications with DWDM technology. Optimization of actuator software as well as channel coding at the bit and packet level will increase reliability. Finally, we will investigate hybridization with an RF system to make the system impervious to clouds and fog to, therefore, increase total link availability.

The authors would like to thank everyone involved in the DODfast project and the flight campaign. This includes all participating members from DLR (optical ground station), ViaLight Communications (laser terminal), and Airbus Defence and Space (TM/TC-link, aircraft integration, and project management). We especially would like to thank the team from WTD 61 in Manching who operated the aircraft and provided tremendous support throughout the demonstration.