Liquid crystals made of organic molecules are extensively used in display devices and other technological applications.1 Phase transitions between differently ordered states in these materials occur with changes in temperature. Usually, these transitions are studied by techniques such as polarizing optical microscopy, x-ray scattering, differential scanning calorimetry (DSC), or by measuring various physical properties as a function of temperature. We have shown that phase transitions can also be detected by studying optical resonance in micrometer-sized liquid crystal droplets, as the resonant response strongly depends on temperature and is proportional to the degree of order in the system.2

Spherical microparticles made of solid dielectric material are widely used for making microresonators. Light is confined inside the microsphere by total internal reflection, as the refractive index of the microsphere is larger than that of the surrounding medium. Resonance is achieved when the circulating light remains in phase after completing one cycle, known as a whispering gallery mode (WGM).3 Such optical microresonators are very useful because of their small mode volumes and high quality factors.3 Together, these enhance the interaction between light and matter in the device. These characteristics have drawn significant attention due to potential applications as high-sensitivity biological and chemical sensors.4–8 Most sensor applications for solid dielectric microspheres use WGM methods. Recently, liquid-crystal-based microresonators have shown great potential for use as soft microresonators9 and for 3D lasing.10 Additionally, the preparation of liquid-crystal-droplet-based microresonators is rather simple, and more importantly they can be tuned with external electric or magnetic fields.

We describe an interesting application of this resonance for detecting phase transitions in liquid crystals. To demonstrate our concept, we chose a typical liquid crystal, octyl cyanobiphenyl (8CB), which transitions between nematic and smectic A (SmA) phases at 33.5°C. The nematic phase possesses only orientational order, while the SmA phase is both orientationally ordered and additionally formed into layers. Liquid crystal droplets were prepared using a micropipette in a polymer matrix of polydimethylsiloxane (PDMS), which has a refractive index (np=1.37) lower than the extraordinary refractive index of the liquid crystal (nLC=1.67). Some typical optical microscopy images of a droplet in two different phases are shown in Figure 1(a) and (c), respectively. Schematic molecular orientations inside droplets in the respective phases are also shown in Figure 1(b) and (d). A small amount (≃1wt%) of fluorescent dye—4-dicyanomethylene-2-methyl-6-(p-dimethylaminostyryl)-4H-pyran (DCM)—was mixed with the liquid crystal before making the droplets. A laser of wavelength 532nm, matched to the absorption band of the dye, was used to illuminate the droplet. Figure 1(e) shows the bright field image of an SmA droplet embedded in PDMS. A thin light ring along the circumference of the droplet and the brighter spot on the diametrically opposite side of the droplet indicate the excitation of WGM resonance. The characteristic resonance spectra from both the nematic and SmA phases are shown in Figure 2. The resonance peaks are observed overlaying the fluorescence background. As the temperature is increased and the phase shifts from SmA to nematic, the width of the resonance spectra (Δλ), which is proportional to the quality factor (Q) of the resonance, decreases. For example, the Q-factor in the SmA phase (26°C) is ≃770 and decreases to 135 in the nematic phase (35°C). Thus, by measuring the characteristic variation of the Q-factor as a function of temperature, the phase transition is detected. Details are reported elsewhere.2 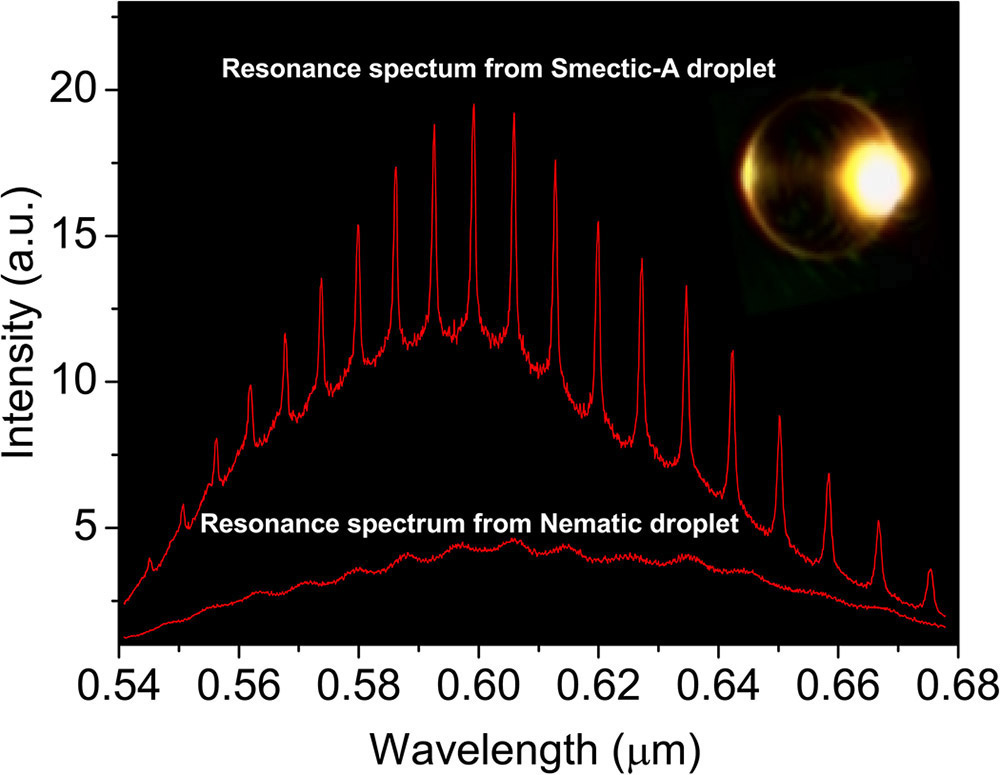 Figure 2. Representative optical resonances from a droplet in the SmA (at 26°C) and nematic (at 35°C) phases. Intensity is given in arbitrary units (a.u.). A dark field image of the SmA droplet is also shown.

The author gratefully acknowledges support from the Department of Science and Technology, Government of India, and from various others who have helped along the way.