Using lidar and rockets to explore turbulence in the atmosphere

Global circulation models have recently been used to assess the transport of chemicals produced by the aurora in the upper atmosphere.1 These studies have been prompted by concern about how nitrogen compounds are transported from the thermosphere (∼90km), where they are produced by the aurora, to the stratosphere (∼50km), where they deplete the ozone layer.2 The models have shown that there is no simple elevator that transports air vertically downward across the mesosphere from the thermosphere to the stratosphere. Instead, the studies conclude that small-scale turbulence mixes the nitrogen compounds downward, entraining them into the flow at lower heights. However, current circulation models do not directly resolve turbulent processes. Instead, they parameterize the transport in terms of eddy diffusion coefficients that are tunable in the models. These studies emphasize that knowledge of turbulence in the upper atmosphere is critical in understanding how meteorological processes control the impact of solar processes on the earth's atmosphere.

Directly investigating these turbulent processes requires two key elements: the ability to measure turbulence in well-defined meteorological conditions, and the ability to measure fluctuations in the atmosphere at submeter scales. Modern lidar (or laser radar) systems provide the first element.3 Rocket-borne ionization gauges provide the second.4 Accordingly, we proposed to NASA an investigation called the Mesosphere-lower thermosphere Turbulence eXperiment (MTeX). We planned to use the established rocket launching and lidar facilities at Poker Flat Research Range (PFRR) in Alaska to study this turbulence.

In particular, we used a Rayleigh lidar system employing a high-power Q-switched Nd:YAG (neodymium-doped yttrium aluminum garnet) laser. Figure 1 shows this lidar operating at PFRR. This lidar system can measure the atmospheric temperature profile in the upper atmosphere (∼40–90km) with typical resolution of about 1km and 1 hour and thus document meteorological conditions like an optical weather balloon. Ionization gauges work like triodes, ionizing the air and then measuring the current between the electrodes, which yields a measurement of the air density. Careful design of the geometry of the ionization gauge allows the air to stream through the sensor and thus reduces the time constant of the instrument. Figure 2 shows the ionization gauge ignited in a vacuum chamber during testing. For a rocket traveling at ∼1km/s, instruments operating at a sampling rate of 5kHz will yield turbulence measurements at 20cm. The ionization gauge sits at the front of the rocket. Four booms that extend outward from the payload supplement the turbulence measurements. Figure 3 shows the payload during testing at NASA's Wallops Flight Facility (WFF). The ionization gauge sat at the top of the payload. The four booms house instruments that provided similarly high-resolution measurements of turbulent fluctuations in the plasma that exists in the upper atmosphere 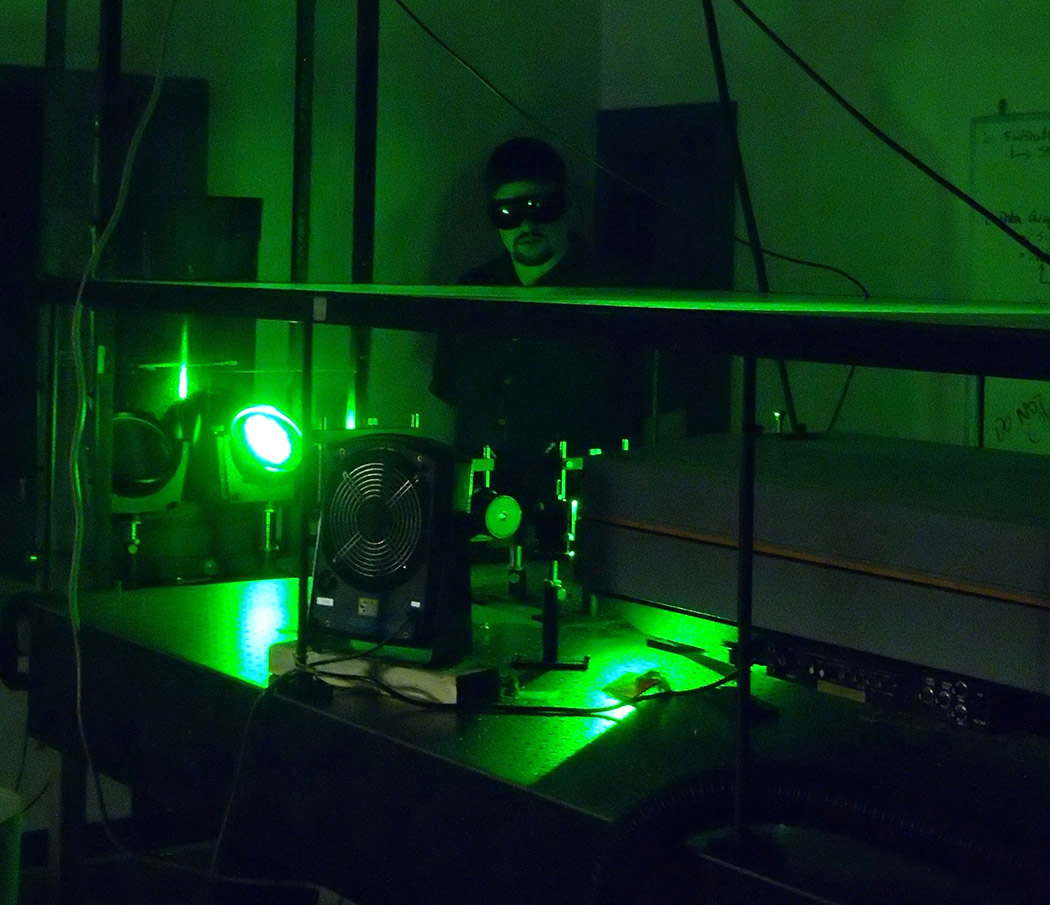 Figure 1. One of the authors working with a neodymium-doped yttrium aluminum garnet (Nd:YAG) laser operating as a lidar transmitter at Poker Flat Research Range (PFRR) during the Mesosphere-lower thermosphere Turbulence eXperiment (MTeX) investigation. The Nd:YAG laser is transmitting in the second harmonic green line at 532nm at 20 pulses per second with an average power of 8W. 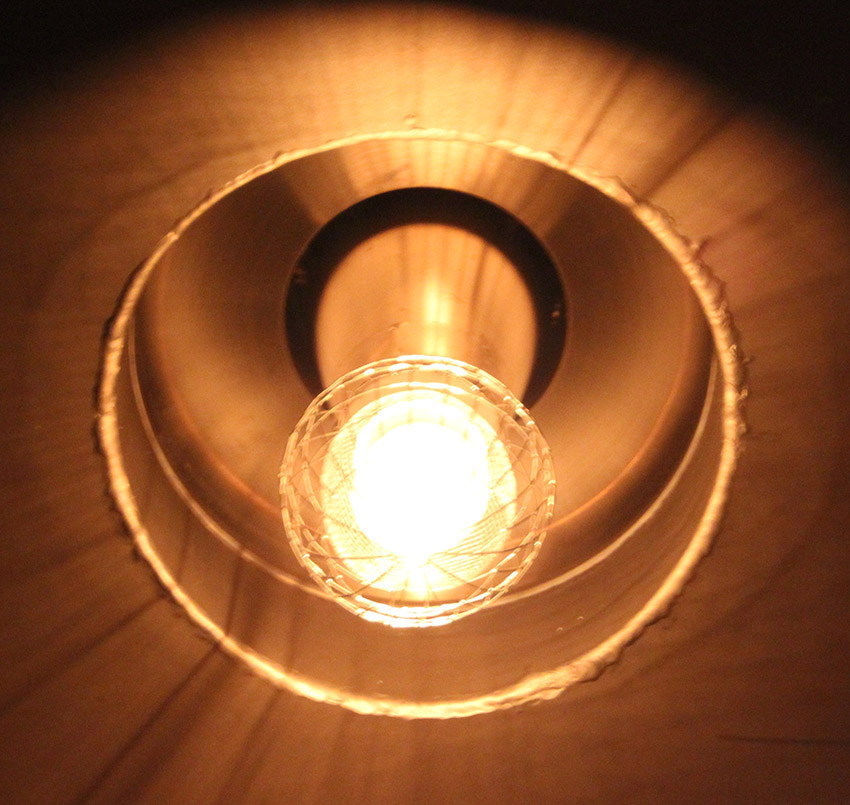 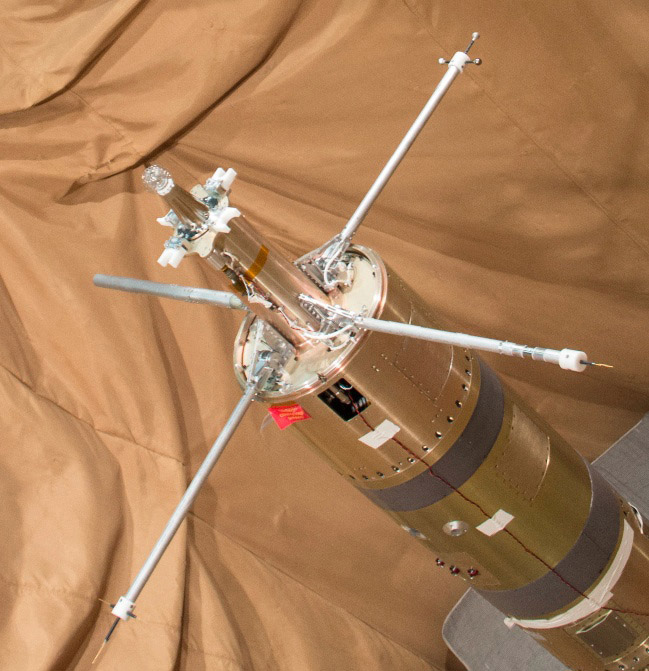 Figure 3. MTeX payload, with booms extended during payload testing at NASA's Wallops Flight Facility. The ionization gauge is visible at the front of the payload. The four booms are extended as during flight. (Photograph by B. Bland, NASA.)

The specific weather condition we wanted to frame our turbulence measurement is a mesospheric inversion layer or MIL.5 These layers occur commonly during the polar winter and persist for periods of hours to days. These layers are a signature of large-scale planetary wave breaking in the upper atmosphere, where a region with a temperature inversion is capped by a region with an adiabatic lapse rate where the air is neutrally buoyant. The region with the inversion allows small-scale waves to become unstable, break, and generate turbulence. The region with the adiabatic lapse rate is indicative of a well-mixed layer and the presence of turbulence.

We chose January 13th through 27th 2015 as the window for the MTeX launches. This window corresponded to the mid-winter period when MILs were likely to occur, and it was centered on the new moon to have darker skies and yield higher quality lidar measurements. After 13 nights of waiting, all of these conditions came together on the night of January 25–26, 2015. The lidar began measurements at 18:37 local time on the evening of January 25. By 20:30 we had acquired sufficient signal to detect an MIL between 80 and 85km. We monitored the MIL over several hours and made the decision to launch the rockets at 23:30. The first MTeX rocket was launched at 00:13 and the second one at 00:46. Figure 4 shows a time-lapse photograph that captured both MTeX rockets being launched as part of the four rockets that were launched that night. The lidar measurements continued until 07:14 on the morning of January 26. 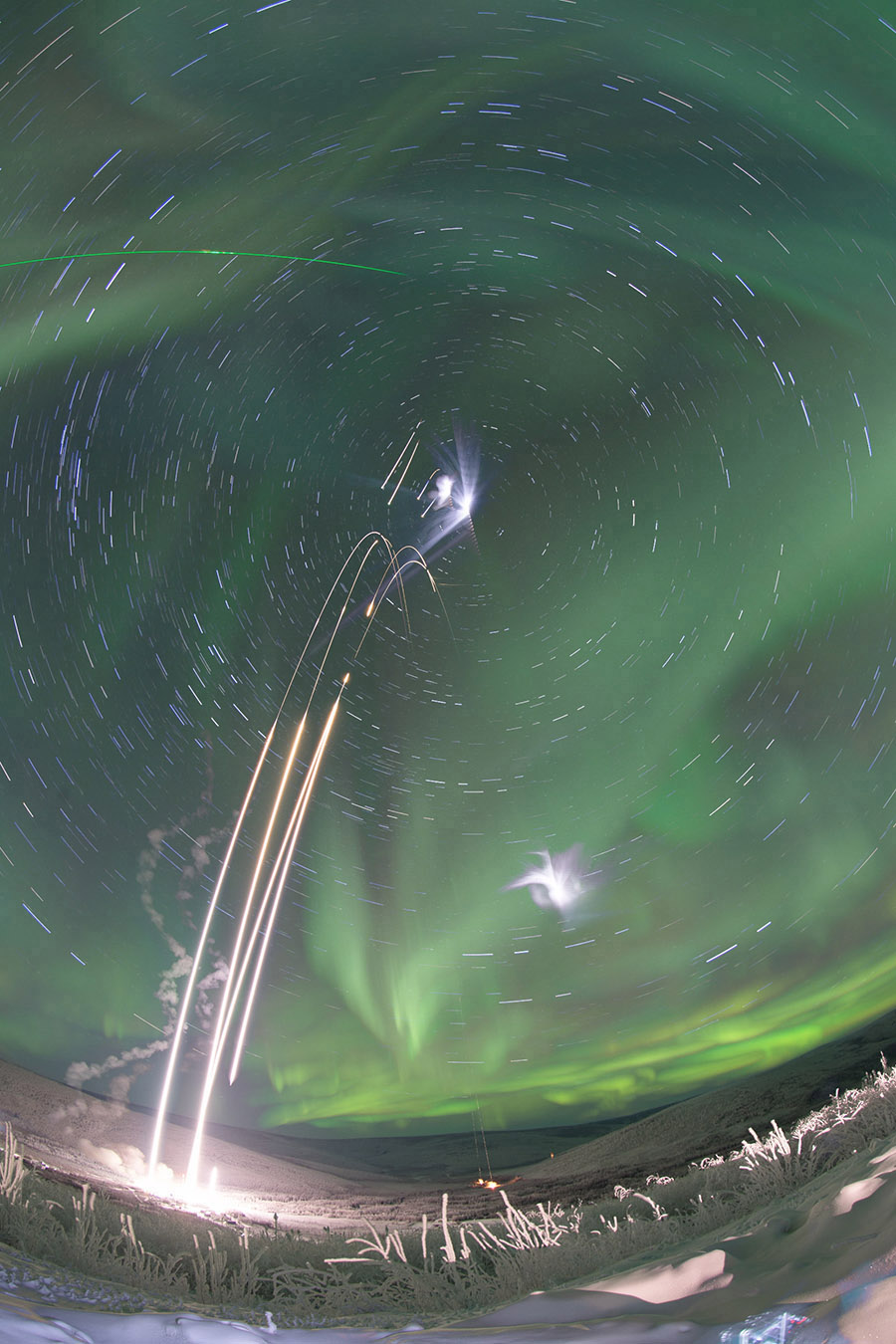 Figure 4. Composite time-lapse photograph of four rocket launches at PFRR on the night of 25–26 January 2015. The lidar beam is visible as a green line in the upper left. (Photograph by J. Adkins, NASA.)

Our preliminary analysis of the lidar measurements showed a persistent MIL in the 80–85km region through the night. Over the hour spanning the rocket launches (00:00–01:00 local time), the MIL had a large amplitude and was capped with a superadiabatic lapse rate. Figure 5 shows the lidar temperature profile in comparison with seasonal reference profiles derived from satellite climatology. The temperature soundings showed that the atmosphere was disturbed with temperatures in the stratosphere being cooler than expected from climatology, and the usual stratopause temperature maximum at 50km was not evident. A preliminary analysis of the rocket measurements showed spectral characteristics typical of layers of strong turbulence. Figure 6 shows strong turbulence as evidenced by the spreading of energy to higher frequencies in the spectrum. There are several intervals in the rocket flight where distinct layers of strong turbulent events were detected. The interpretation of the data will employ contemporary direct numerical simulations of fluid dynamics. The documentation of the MIL and the weather conditions over the whole night critically define the model scenarios for characterizing and understanding the turbulence using contemporary fluid-dynamic computer simulations.6The characteristics of the simulated turbulence will be compared with those of the measured turbulence to understand the generation and characteristics of the turbulence in the upper atmosphere. 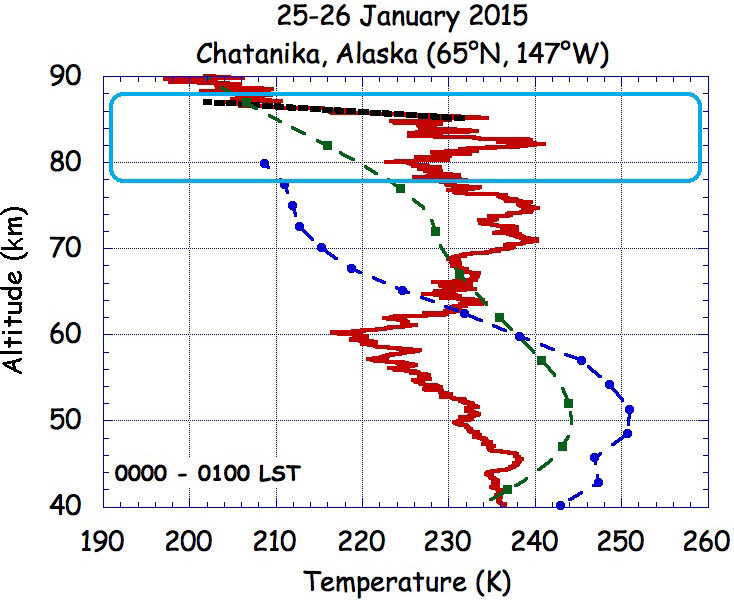 Figure 5. Temperature profile measured by lidar at PFRR on the night of January 25–26, 2015. The temperature profile is plotted in red, with two comparison profiles from climatology in blue and green. The MIL with the superadiabatic lapse rate ( >10K/km) is indicated in the blue box. LST: Local standard time. 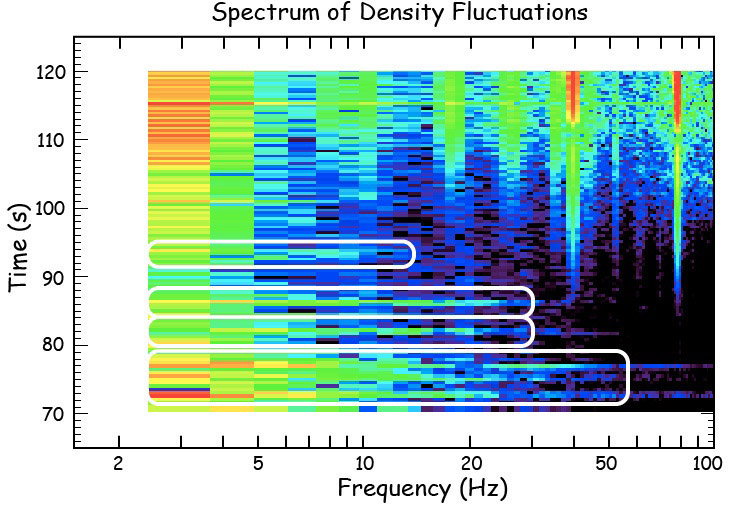 Figure 6. Power spectrum of density fluctuations measured in downleg by second MTeX rocket as a function of rocket flight time and frequency. Regions of turbulent activity are clearly visible as indicated by the white boxes. The vertical stripes extending downward from the top are instrumental features.

Going forward we are focusing our efforts on better understanding the interactions of waves and turbulence in the upper atmosphere and better characterizing the turbulent transport in contemporary circulation models.

The MTeX investigation is supported by NASA under grant NNX13AE31G. The authors thank the staff at L-IAP, PFRR, and WFF for their support.

Richard Collins, professor in the Department of Atmospheric Sciences and the Geophysical Institute, is interested in laser remote sensing, atmospheric dynamics, and science education. He is the author or coauthor of more than 50 articles.

Colin Triplett, graduate research assistant in the Department of Atmospheric Sciences and the Geophysical Institute, is a PhD student. His dissertation topic is atmospheric dynamics with a focus on the analysis and interpretation of the MTeX measurements