Cancerous brain tissue is often impossible to distinguish from healthy regions during surgery. The standard treatment for gliomas, a class of cancer that invades the normal brain, is surgical resection, largely guided by visual inspection and pre-operative magnetic resonance imaging (MRI). When not fully removed during surgery, invasive cancer cells cause recurrence of brain cancer. A smaller area of residual tumor results in improved patient prognosis, while complete resection significantly extends the time to recurrence and increases patient survival.1–5 Conversely, the removal of healthy tissue can cause serious cognitive deficits.6, 7

Invasive cancer is not readily apparent in preoperative MRI scans.1–9 This inability to fully detect invasive brain cancer results in residual cancer cells remaining following surgery, negatively impacting patient survival. To address this issue, we have demonstrated a technique for in vivo Raman spectroscopy using a handheld fiber optic probe for rapid detection of cancer invasion in 17 patients with brain cancer (low- and high-grade gliomas). Using a machine-learning algorithm to analyze the Raman spectra, we were able to distinguish normal brain from cancer with accuracy greater than 90%. In particular, we can use Raman spectroscopy to detect low-density cancer invasion, which was previously undetectable, representing a potential for significant improvement in patient outcomes.

Optical spectroscopy techniques, which study light interactions with matter at multiple wavelengths, are increasingly being used for cancer detection and interventional guidance.8 Raman spectroscopy is a noninvasive surface imaging modality that gives information based on molecular species such as cholesterol, lipids, and proteins. The Raman effect measures tissue characteristics based on the inelastic scattering of light by molecules. Such scattering requires sophisticated optical technology to measure: only one in several million scattered photons exhibits the Raman effect.

To use the molecular information available in Raman spectroscopy, we carried out measurements during surgical resection with the goal of distinguishing cancer tissue from normal. We used intraoperative Raman spectroscopy for 17 patients with grade 2–4 gliomas undergoing brain cancer surgery at the Montreal Neurological Institute and Hospital. In particular, we evaluated the ability of Raman spectroscopy to detect invasive brain cancer in areas beyond the extent of cancer visible on MRI for these patients.

The system comprises a handheld fiber optic probe connected to a near-IR laser (785nm) and a high-resolution charge-coupled spectroscopic detector (see Figure 1).9 We used the probe to measure 5–10 locations per patient during the course of surgery, placing the probe in contact with brain tissue. We used a Medtronic StealthStation unit to register the measurement location on preoperative MRI. Collecting the Raman spectra with the probe took 0.2s in total, consisting of three Raman measurements and one background measurement (laser off). After acquisition, the probe was removed from the tissue and a biopsy sample immediately taken for neuropathology assessment. 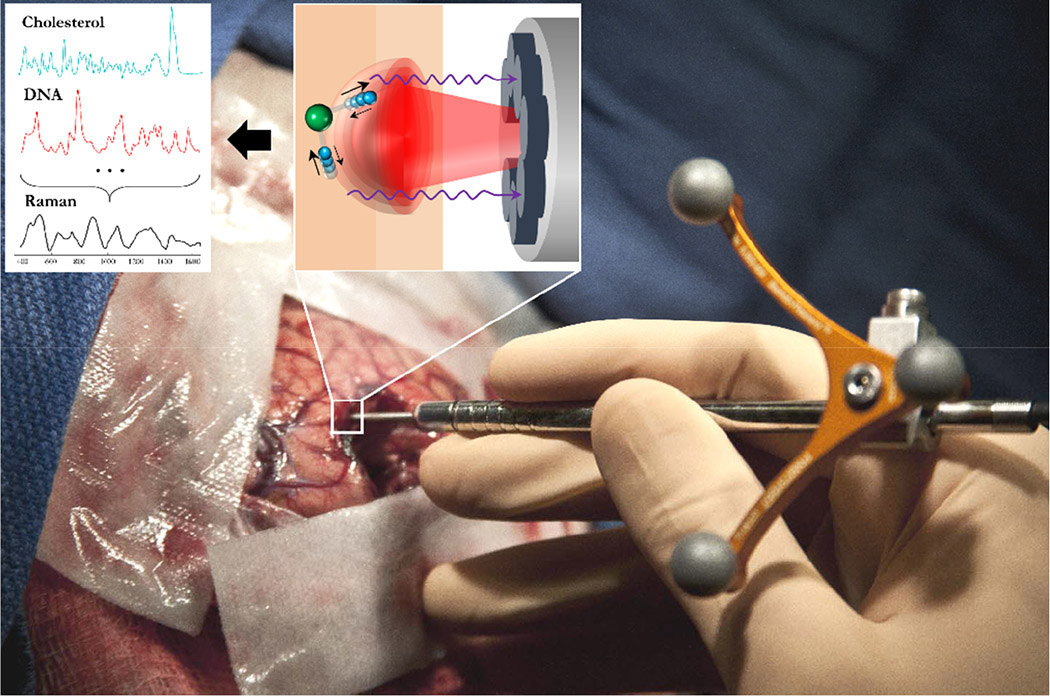 Figure 1. The handheld Raman spectroscopy probe (EmVision LLC) being used during surgical resection. A schematic illustration shows the excitation light from the probe interacting with molecular species in the brain tissue, which give rise to the measured Raman spectra.9

We subtracted the background measurement spectra from the average of the three Raman spectra acquired, then normalized the data (to laser power) and removed intrinsic fluorescence using an iterative polynomial fit.10 Then, using a machine-learning algorithm called the boosted trees method, we classified tissue samples as cancerous or normal, based on the Raman spectra.11 The average Raman spectra show differences that can be used to differentiate between normal brain versus cancer tissue using machine-learning algorithms (see Figure 2). Cancer tissue shows a decrease in the band at 700cm−1 versus normal brain, which corresponds to the presence of cholesterol and phospholipids.12 There is also an increase in the bands from 1540 to 1645cm−1, due to the presence of higher nucleic acid content in cancer tissue.13 Using the boosted trees method, we obtained a classification accuracy of 90%, sensitivity of 94%, and specificity of 86% for detecting cancer in all 161 samples from these 17 patients. The classification takes into account all of the spectral information available in the Raman spectra, rather than individual bands. More than 50% of the cancer samples were obtained from areas of invasive cancer at the periphery of the tumor. 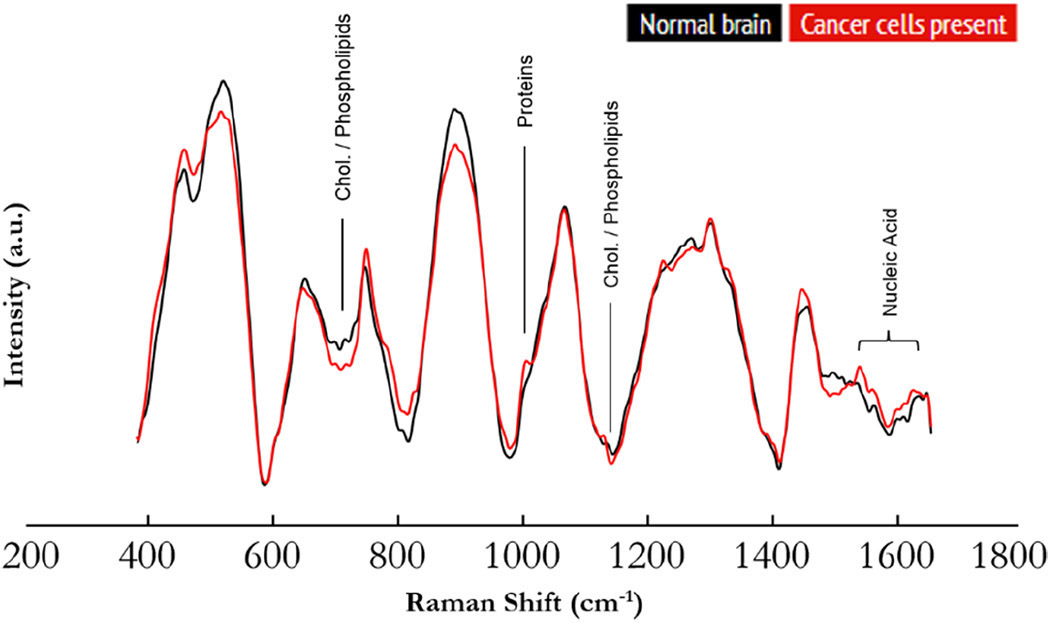 Figure 2. Average Raman spectra obtained from tissue samples for normal brain (in black) and from tissue with cancer cells (in red). The red spectra include samples from bulk tumor as well as invasive cancer.9a.u.: Arbitrary units.

In summary, we have shown that in vivo Raman spectroscopy is capable of accurate tissue classification of gliomas during surgery. We have designed a handheld fiber-optic probe technique that allows rapid intraoperative measurement of inelastic scattering Raman spectra. These spectra represent molecular components in the interrogated tissue. In particular, the unique molecular signatures measured by Raman spectroscopy can properly identify invasive tumor tissue, indistinguishable by visual inspection or by intraoperative MRI guidance. The next step is a clinical trial investigating the use of this technique to reduce the amount of residual cancer remaining following surgery. We are also assessing complementary spectroscopy techniques such as intrinsic fluorescence and diffuse reflectance, with the potential to improve further diagnostic accuracy.