Characterized by its impressive computing power and extreme delicacy, the brain is the most complex organ of the human body. Any dysfunction or disease suffered by the brain (such as stroke) can be lethal. Due to its enormous complexity, however, the brain remains the least-studied organ in the body, despite the development of a number of imaging tools that enable the structure and functions of the brain to be probed. Conventional in vivo fluorescence imaging of the brain, in the visible and near-infrared (NIR) regions (400–900nm), can reveal both anatomical and molecular features with high spatial resolution. However, invasive treatments (e.g., scalp removal, craniotomy, or skull thinning) are usually required to perform this imaging on live experimental animals.1, 2

We have developed a new brain imaging technique capable of seeing through the intact scalp and skull, enabling sharp images of the brain vasculature to be obtained noninvasively.3 Building upon our previous work based on fluorescence imaging in the second NIR window (NIR-II window, 1000–1700nm),4, 5 this imaging technique probes the vascular structure of the brain by collecting fluorescence photons with wavelengths of 1300–1400nm (the NIR-IIa window). This narrow spectral range balances photon scattering by biological tissues (prominent at wavelengths of <1300nm) and photon absorption by water molecules (prominent at >1400nm). To perform imaging in this wavelength range, diameter-sorted single-walled carbon nanotubes (SWNTs) are excited with an 808nm laser and emitted fluorescence photons are detected with a 2D indium gallium arsenide array detector.

To demonstrate the benefits of NIR-IIa imaging over conventional in vivo fluorescence imaging operating at shorter wavelengths, we made a multicolor fluorescent probe with a broad emission band ranging from 850nm (the traditional NIR window) to 1400nm (the NIR-IIa window). We fabricated this probe by conjugating a commercial fluorescent molecule (IRDye-800) to SWNTs: see Figure 1(a). We subsequently injected this multicolor fluorescent conjugate into a live mouse and allowed it to circulate in the brain vasculature. For vessels located deep inside the brain tissue of a non-craniotomized animal, the emitted fluorescence photons must travel through the turbid brain tissue, opaque cranial bone, and scalp skin (the C57Bl/6 mouse used for this experiment has a 0.6mm-thick skull and 0.7mm-thick scalp). As a result, photons are unavoidably subjected to attenuation and distortion due to absorption, scattering, and refraction. We were able to show that by rationally selecting a sub-region of 1300–1400nm, both the scattering and absorption of fluorescence photons can be minimized—see Figure 1(b)—leading to optimum image fidelity of the brain vasculature in a live mouse without any invasive removal of the scalp or skull: see Figure 1(c–f). Compared to traditional fluorescence-based brain imaging techniques that require craniotomy or skull thinning to obtain better visualization, our NIR-IIa imaging technique avoids any inflammatory response as a result of invasive extra-cerebral treatment. It is therefore ideally suited for the long-term monitoring of cerebrovascular structures and functions with minimum external intervention. 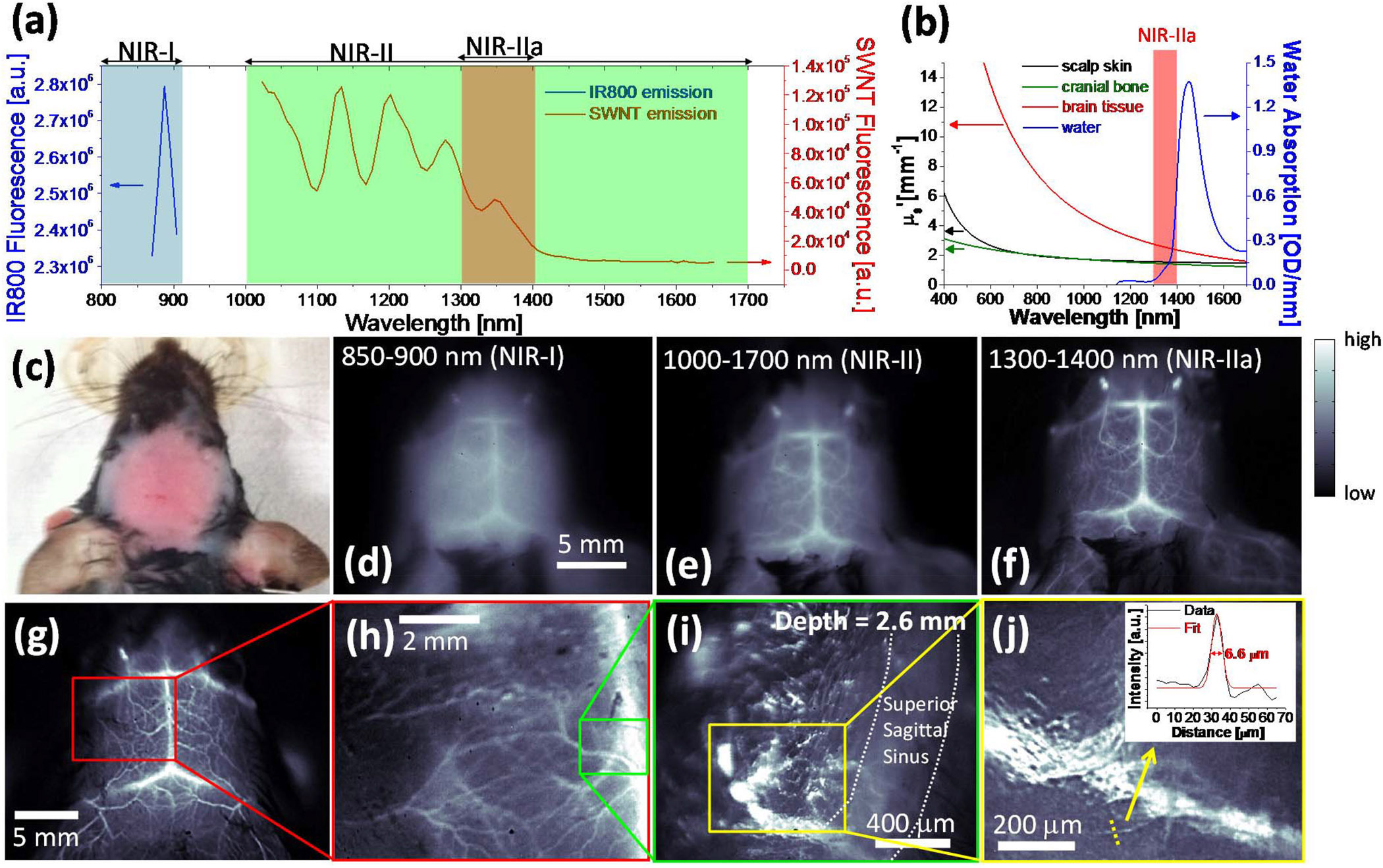 Figure 1. (a) An 808nm-excited fluorescence emission spectrum of the multicolor fluorescent conjugate, consisting of IRDye-800 (IR800) and SWNTs (single-walled carbon nanotubes). The color-shaded areas represent different sub-regions of near-infrared (NIR), including the traditional NIR (NIR-I, 850–900nm, cyan), NIR-II (1000–1700nm, green), and NIR-IIa (1300–1400nm, red). (b) The scattering spectra of the scalp skin (black), cranial bone (green), and brain tissue (red), plotted along with the absorption spectrum of water (blue). Note that, due to tissue scattering and water absorption, the NIR-IIa region is located at the global minimum of light attenuation. (c) A white light photograph of the head of a live mouse with hair shaved off the scalp. (d–f) Fluorescence images of the same mouse head shown in (c), taken in different NIR sub-regions: (d) the NIR-I window; (e) the NIR-II window; and (f) the NIR-IIa window. (g–j) Live mouse brain vascular images taken in the NIR-IIa region with progressively increasing magnifications. The inset of (j) shows the cross-sectional fluorescence intensity profile (black) along the yellow dashed line in the image of (j) and the Gaussian-fitted plot (red), with an extracted full width at half-maximum of 6.6μm. a.u.: Arbitrary units. (Reprinted with permission. Copyright Nature Publishing Group 2014.3)

The sharpest brain vascular image obtained in the NIR-IIa window—see Figure 1(f)—suggests minimal scattering of photons traveling through the brain tissue, the skull, and the scalp. With the scattering coefficient following an exponential decay for these tissues—see Figure 1(b)—we estimate that the NIR-IIa photons exhibit ∼47% less scattering than traditional NIR through intact scalp and skull, and approximately 99% less than traditional NIR through 1mm-thick brain tissue. This reduced photon scattering leads to a greater penetration depth, resolving sub-10μm cerebral capillaries at >2mm under the surface of the scalp skin: see Figure 1(g–j). Such a high image resolution at millimeter-penetration depth has been difficult to achieve using other imaging techniques, which are usually hampered by either sub-optical spatial resolution (e.g., computed tomography and MRI) or poor penetration depth (e.g., fluorescence imaging in the traditional visible and NIR windows).

Due to the salient advantages of NIR-IIa fluorescence imaging, this new brain imaging technique has been readily applied for the study of cerebrovascular and hemodynamic anomalies in a mouse model of stroke. By applying NIR-IIa imaging in the dynamic mode, we were able to achieve continuous capture of wide-field mouse brain images immediately following systemic administration of NIR-IIa fluorescent SWNTs. At a frame rate of ∼5.3/second, the cerebral blood inflow and outflow can be clearly visualized in real time as the SWNTs circulate in the arterial and venous vascular networks—see Figure 2(a–c)—making it possible to differentiate between cerebral arteries and veins using principal component analysis (PCA): see Figure 2(d). We repeated the dynamic NIR-IIa imaging in a mouse with occlusion in the middle cerebral artery of the left cerebral hemisphere, which supplies oxygenated blood to the brain. In stark contrast to the healthy brain tissue, we observed drastically decreased blood perfusion in the diseased brain tissue: see Figure 2(e–g). Taking advantage of the different blood flow patterns in arteries and veins, PCA revealed that the cerebral arteries in the left hemisphere were significantly affected by the surgery-induced occlusion, while cerebral arteries in the right hemisphere and cerebral veins in both hemispheres remained largely unaffected, maintaining normal blood circulation: see Figure 2(h).

To summarize, we have developed a new fluorescence-based, all-optical brain imaging technique that operates in an optimized NIR window between 1300 and 1400nm, enabling balanced scattering and absorption of photons in biological tissues. This new imaging approach generates minimally distorted brain vascular images with crisp image sharpness, great penetration depth of millimeters into the brain, high resolving power of sub-10μm anatomical features, and fast recording rate for hemodynamic imaging, all of which were obtained through intact scalp skin and cranial bone.3, 6 We have also achieved even longer wavelengths of up to 1700nm for brain fluorescence imaging, allowing further improved image fidelity and deeper tissue penetration.7 Much faster imaging speed can also be performed with brighter fluorophores.8 Given the many benefits offered by this new imaging technique, in further work we intend to use photons in the advantageous NIR-IIa window for all-optical interrogation and manipulation of neurovascular structures and functions in the brain of live experimental animals.9, 10 This may help provide new insights into the behavior and interconnection of individual neurons with cellular resolution in vivo.11

This study is supported by the National Cancer Institute of the US National Institutes of Health through grant 5R01CA135109-02.