Phase shifts can be determined by measuring the fringe shifts in recorded interferograms.

Spatial light modulators (SLMs) are used in a wide range of applications, including high-energy lasers,1 beam focusing,2 digital holography,3 refractive lenses,4,5,6 astronomy, and retinal imaging.7,8,9 The techniques for measuring the phase that is introduced by these modulators are varied. Among them, extraction phase methods use the correlation matrix of intensities to determine the phase introduced by the SLM.10 Interferometry represents one of the most widely used techniques.11 Others include the use of polarizers to measure the phase introduced by every gray level,12 analysis of the spread spectrum for phase recovery,13 and the use of holography,14 Ronchi gratings,15 and Young interferometers.16

We have proposed a technique to obtain a data curve representing the phase shift vs. the gray level of an SLM. In our approach, we measure the fringe shifts using recorded interferograms.17 When the gray levels are displayed in the SLM, they produce a phase shift. When the SLM is placed within a Twyman-Green interferometer, this phase shift can be observed in the interference pattern as a shift in the fringes (see Figure 1). The gray-level images displayed in the modulator are divided into two equal parts: in the upper part of the image, the gray levels vary from 0 to 255; and in the lower part, the levels remain fixed at 0 to provide a reference (see Figure 2). 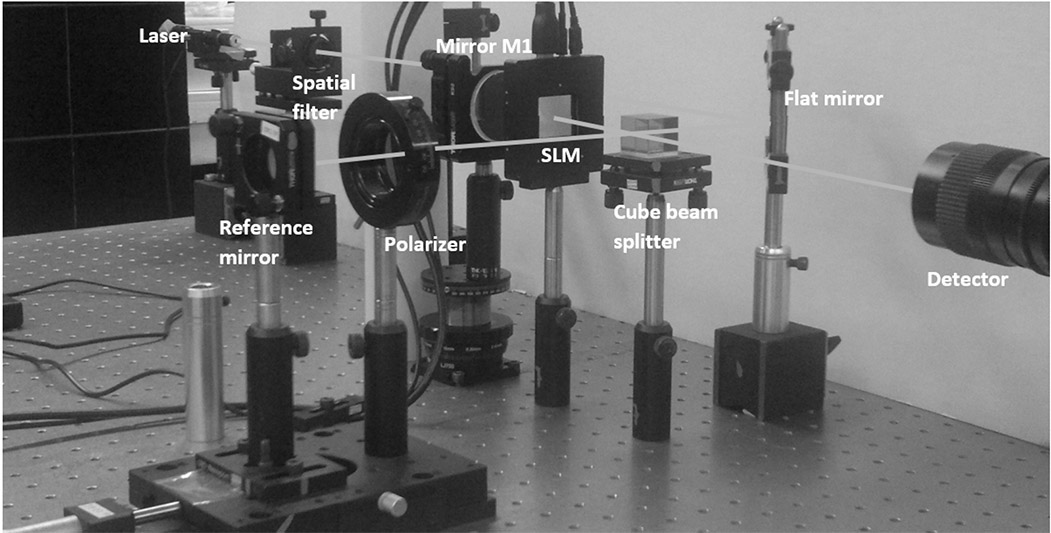 We developed an algorithm to obtain the phase shifts introduced by every gray level displayed in the SLM.18 In its first cycle, the algorithm makes a reading of the 256 experimental interferograms. In the second cycle, these interferograms are smoothed using an averaging filter.11 The image that results from this cycle has less noise than the input image. An example of the central profile of these two images can be seen in Figure 3. 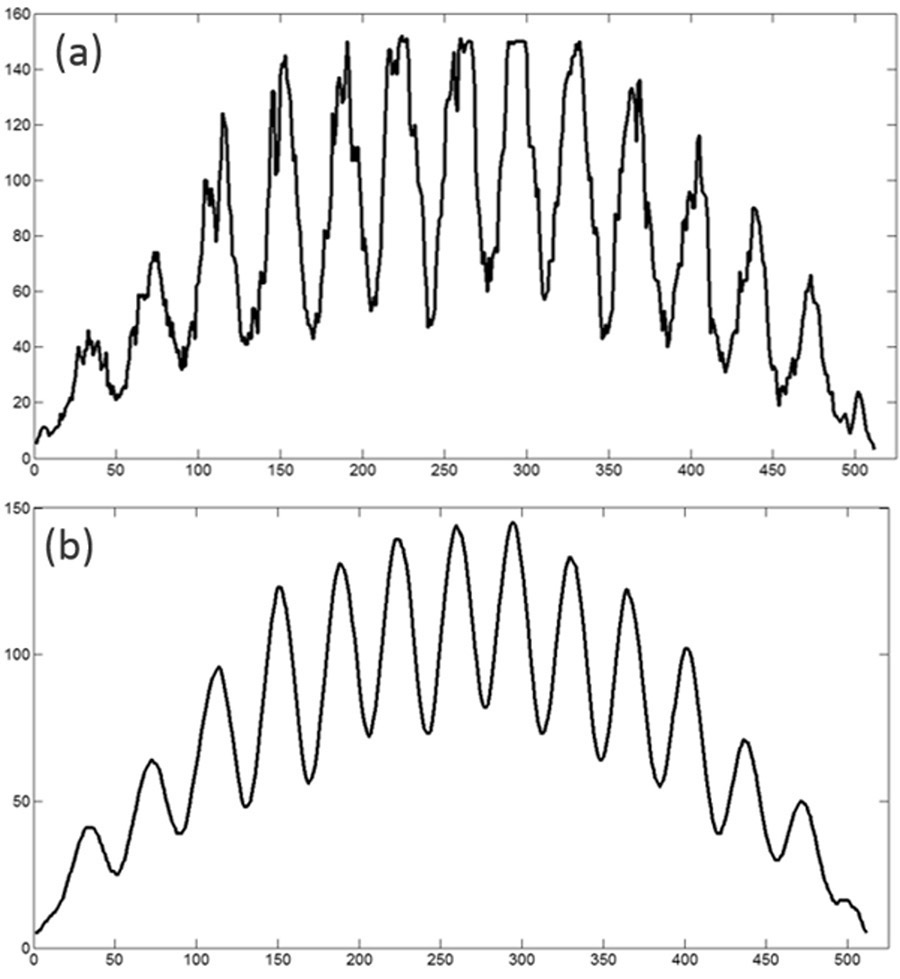 Figure 3. Irradiance central profiles of two images: (a) without smoothing and (b) with smoothing.

In the third cycle, the values and positions of all maxima in the interference patterns are measured. This measurement is carried out by comparing the intensity of every pixel with its closest neighbors. If the intensity of one pixel is larger than others within its neighborhood, this pixel is taken as the local maxima, and both its value and position are saved. This process is repeated until it has been completed for all of the pixels in the input image, allowing us to obtain a matrix with all of these values. Some examples of these matrices are shown in Figure 4. 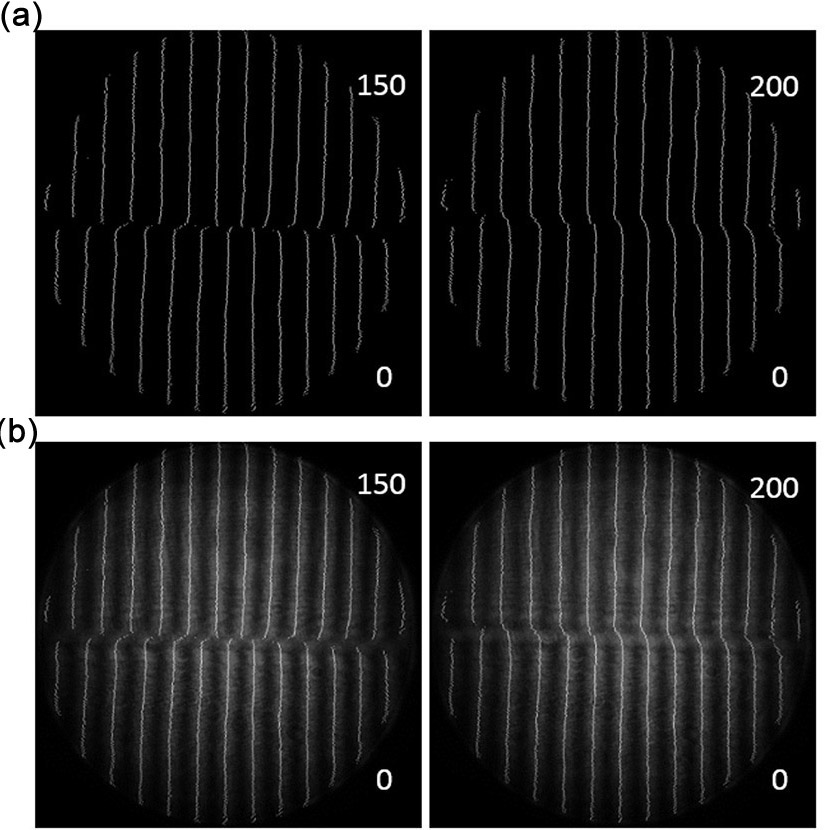 To quantify the phase shift that is observable in the interferograms, our algorithm takes two rows of the skeletonized image, with the first row corresponding to the upper part of the interferogram (where the gray level has been varied) and the second row corresponding to the lower part (where the gray level remains fixed as reference). The subtraction of these two positions allows us to obtain the shift introduced by every gray level. This calculus is performed for all of the maxima: see Figure 5(a). 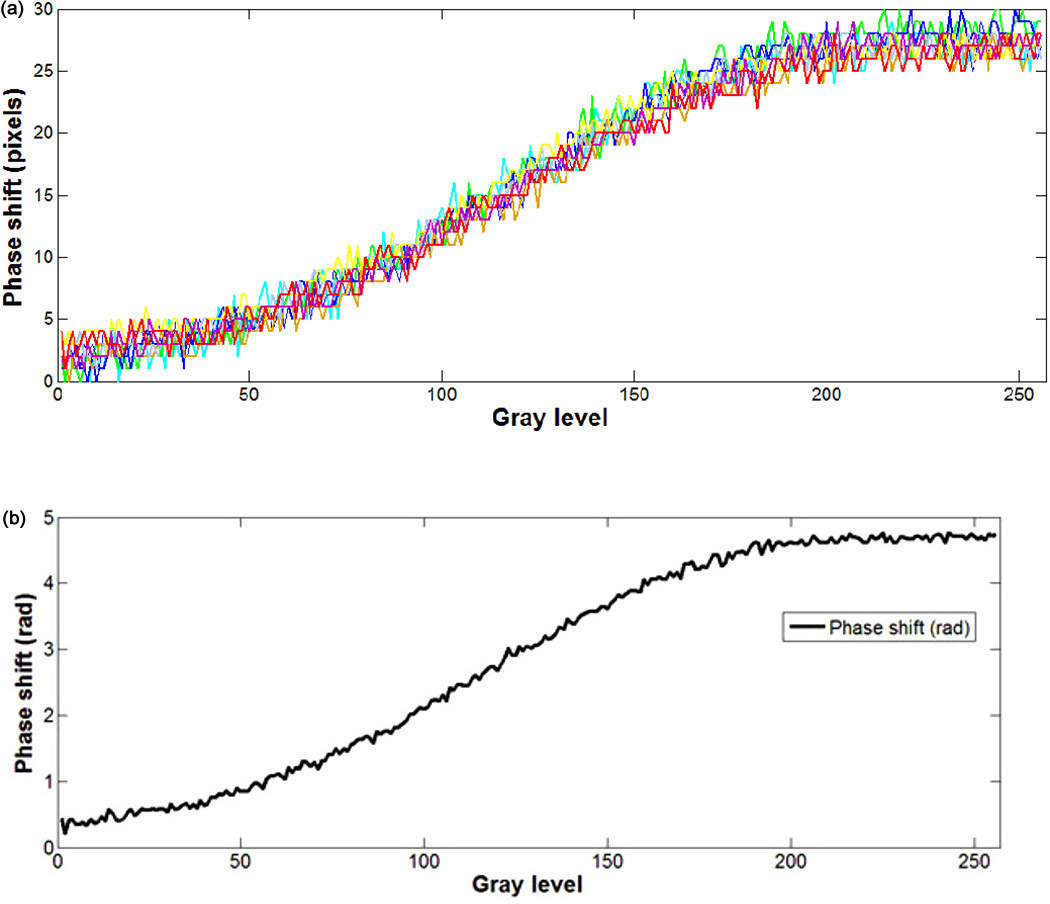 Figure 5. (a) Phase shift vs. gray level for all maxima in the experimental interferograms. (b) Averaged phase shift introduced by every gray level. rad: Radians.

In the final step, we obtain the phase shift that is introduced by every gray level displayed in the SLM by taking an average of all of these shifts for all maxima in the interference pattern: see Figure 5(b). Using this method, we are able to measure the varying thicknesses of dielectric thin films. This process is performed by shifting the phase in the area where the step is localized, allowing us to obtain the phase introduced by the thin film. Figure 5 shows that the best results are obtained in the region between the 50th and 190th gray levels. In this region, there is a very small standard deviation (0.0920) and an uncertainty value of ±0.168rad. Another important aspect of the obtained phase shift is that, using our method, the noise observed in these measurements can be reduced.

In summary, our method establishes a direct method for measuring the phase shifts of an SLM. This technique, which is based on the measurement of fringe shifts, is also applicable to transmissive SLMs working in phase mode and can be used to test the size and location of defects on a large surface, providing an advantage over other methods that obtain a general evaluation of the surface. We are currently using this method to quantify the phase of thin-film steps, enabling the measurement of dielectric thin-film thickness.

Brenda Villalobos-Mendoza received a PhD from the INAOE in 2015 and an MSc in optics from Benemérita Universidad Autónoma de Puebla (BUAP), Mexico, in 2010. She received her engineering degree from the Universidad Autónoma de Ciudad Juárez (UACJ), Mexico, in 2008. She has experience in optical testing in the laboratory, and her research interests include interferometric optical testing and phase-shifting interferometry.

Fermín S. Granados-Agustín received his BSc in physics from the National Autonomous University of Mexico (UNAM) in 1993. He received his MSc and PhD degrees in optics in 1995 and 1998, respectively, from the INAOE. He held a postdoctoral position at the mirror lab of the Steward Observatory at the University of Arizona in 1999. He is currently a national researcher for the National System of Researchers, Mexico, and has been the head of the optical shop at the INAOE since 2005. His research interests include optical information, interferometric optical testing, and instrumentation.

Daniel Aguirre-Aguirre received his engineering physics degree in 2007 from the Engineering and Technology Institute (IIT-UACJ), Mexico. He received his MSc and PhD in optics in 2010 and 2014, respectively, from the INAOE. His research interests include optical metrology, digital image processing, and instrumentation.

Rafael Izazága-Pérez received his BSc in electromechanical engineering from Acapulco Technological Institute (ITA), Guerrero, Mexico, in 2008 and his MSc in applied physics from BUAP in 2010. He is a member of SPIE and received his PhD from the INAOE. He has experience in optical fabrication and testing at INAOE's optical workshop. His latest research interests include stressed mirror polishing, optical metrology, and instrumentation.

Alejandro Cornejo-Rodríguez received his physics degree in 1964 from UNAM, his MSc in optics in 1968 from Rochester University, and his PhD in optics in 1982 from the Tokyo Institute of Technology, Japan. He is now a senior researcher in the Optics Department at the INAOE. His research interests include optical metrology, optical surface testing, and optical image processing.