A new lens-free on-chip microscope, which adopts a synthetic aperture approach, achieves a half-pitch resolution of 250nm with an effective numerical aperture of ∼1.4 and a wide field of view (over 20mm2).
13 April 2015
Wei Luo, Alon Greenbaum, Yibo Zhang and Aydogan Ozcan

The high-resolution optical inspection of a specimen across a large area is critical for the examination of rare events or abnormal objects in a variety of scientific disciplines, including biology, medicine, and materials science. Conventional lens-based microscopes are, however, limited by the trade-off between spatial resolution and field of view (FOV). Maintaining a high resolution over a large FOV requires expensive and bulky optical components or mechanical scanning stages, which limits widespread use, particularly in resource-limited settings.

The rapid evolution of modern detection, sampling, and computing technologies has enabled new imaging methods that do not require lenses. These lensless approaches are not limited by the same trade-off between resolution and FOV. In particular, lens-free holographic on-chip imaging provides a wide-field and high-resolution imaging platform, coupled with a design that enables the development of compact and cost-effective devices.1, 2 The optical setup of a lens-free on-chip microscope can be quite simple, constituting a partially coherent light source (e.g., an LED) and an image sensor chip. The specimen is placed slightly above the active area of the chip (100–500μm). Light from the partially coherent source is incident on the specimen, and the resulting holographic diffraction pattern is recorded and digitized by an image sensor chip for further reconstruction.

Running at unit magnification, a lens-free on-chip microscope possesses an FOV that is equal to the image sensor active area (20–30mm2), typically >100 times larger than a lens-based microscope with comparable resolution. To mitigate the relatively low spatial-sampling rate of the image sensor pixels, source- or sample-shifting-based pixel super-resolution is performed to boost the lateral resolution. For example, by jittering the position of the light source above the sample plane, the object diffraction patterns on the image sensor experience sub-pixel shifts. These shifts can be used to synthesize high-resolution (i.e., pixel super-resolved) diffraction patterns of the sample, yielding significantly higher-resolution coherent image reconstruction.3, 4

Although lens-free on-chip imaging has made significant progress in recent years, it still suffers limitations in the pursuit of higher resolution and larger numerical apertures (NAs). These limitations occur due to signal-to-noise ratio (SNR) deterioration at high spatial frequencies and the narrow acceptance angle of the image sensor pixels. To tackle these challenges, we have implemented a synthetic-aperture-based approach that we call LISA (lens-free imaging using a synthetic aperture).5 Using oblique illumination angles, LISA achieves an expanded spatial bandwidth. Under each oblique illumination, part of the higher spatial frequencies of the object are shifted to lower frequencies. These frequencies undergo less SNR deterioration and pixel aberrations. Frequency shifts can also convert part of the evanescent waves that make up the object features, which would not reach the image sensor plane under normal illumination, into traveling waves that can be sampled by the image sensor chip.

During the data acquisition process, a partially coherent light source with a spectral bandwidth of ∼3nm is scanned across the surface of a dome to provide illuminations from different angles: see Figure 1(a). To obtain high-resolution diffraction patterns of the samples, source-shifting-based pixel super-resolution is also performed at each illumination angle. The resulting super-resolved diffraction patterns are then fed into a synthetic aperture algorithm,5 enabling the object to be reconstructed with significantly enhanced resolution. In this algorithm, digital wave propagations are sequentially performed between the sample and the sensor planes at all the illumination angles. 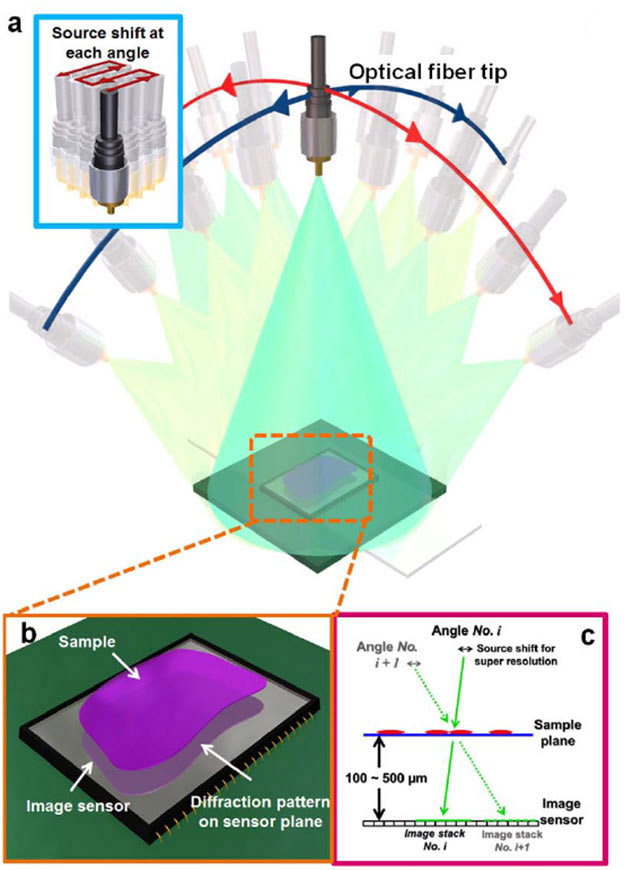 Figure 1. (a) Optical setup of our lens-free imaging method using a synthetic aperture. Partially coherent light is coupled to a single mode fiber with a spectral bandwidth of 2.5nm. Inset: A rotational arm is mounted on a two-axis linear stage so that the light source can be laterally shifted to perform pixel super-resolution. (b) Close-up showing the placement of the sample above the image sensor. (c) Optical schematic. The sample is placed above the image sensor by a small distance (0.1–1mm). The fiber tip is mounted on the rotational arm so that it can be scanned across a dome above the sample plane.

On the sensor plane—see Figure 1(b)—the amplitudes of the waves recorded at the corresponding angle are used as measurement constraints. On the sample plane, the object is updated in the spatial frequency domain by an aperture function that is shifted by the corresponding illumination angle: see Figure 1(c).5 Repeating this process for 5–10 cycles allows us to recover phase and amplitude images of the object with a significantly expanded spatial bandwidth. Running the same process at different wavelengths (i.e., 472, 532, and 632nm) and combining the resulting reconstructions enables color images of the sample to be generated.

The results that we obtained using LISA show an effective NA improvement from 0.9 to 1.4 with a half-pitch resolution of 250nm at an illumination wavelength of 700nm: see Figure 2. Due to its phase retrieval capability, LISA is also capable of imaging dense samples, such as connected tissue slices. Our lens-free imaging results show a decent agreement with conventional microscopy images of the same tissue samples, as shown in Figure 3. 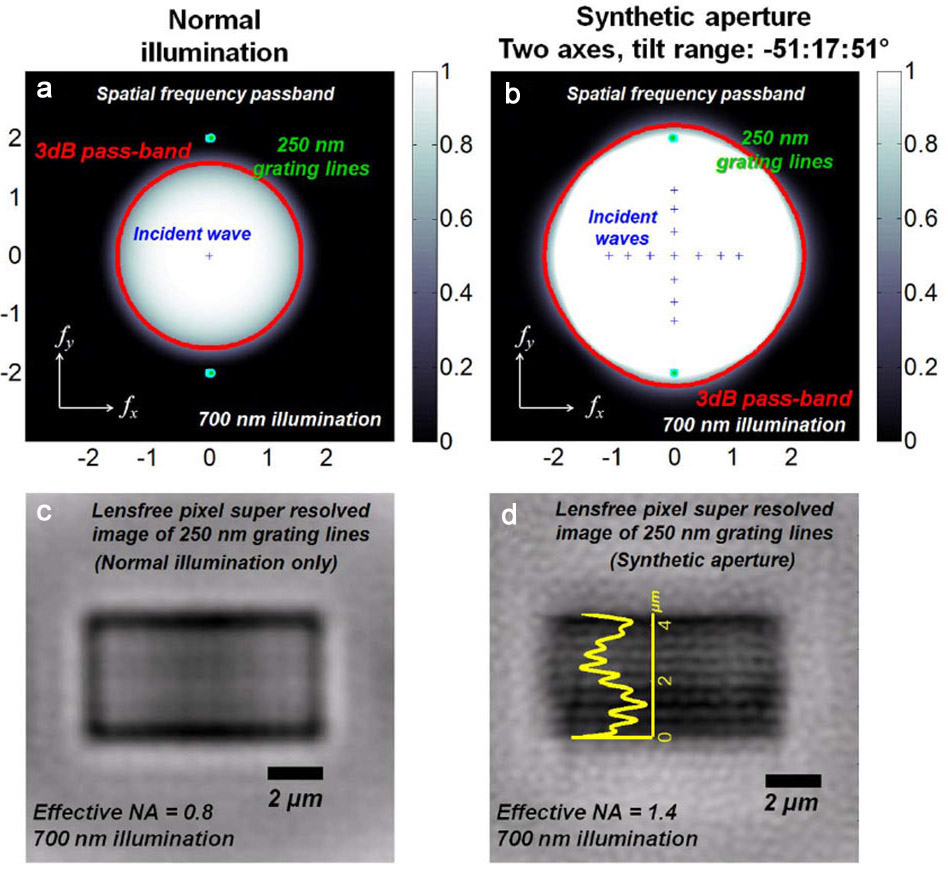 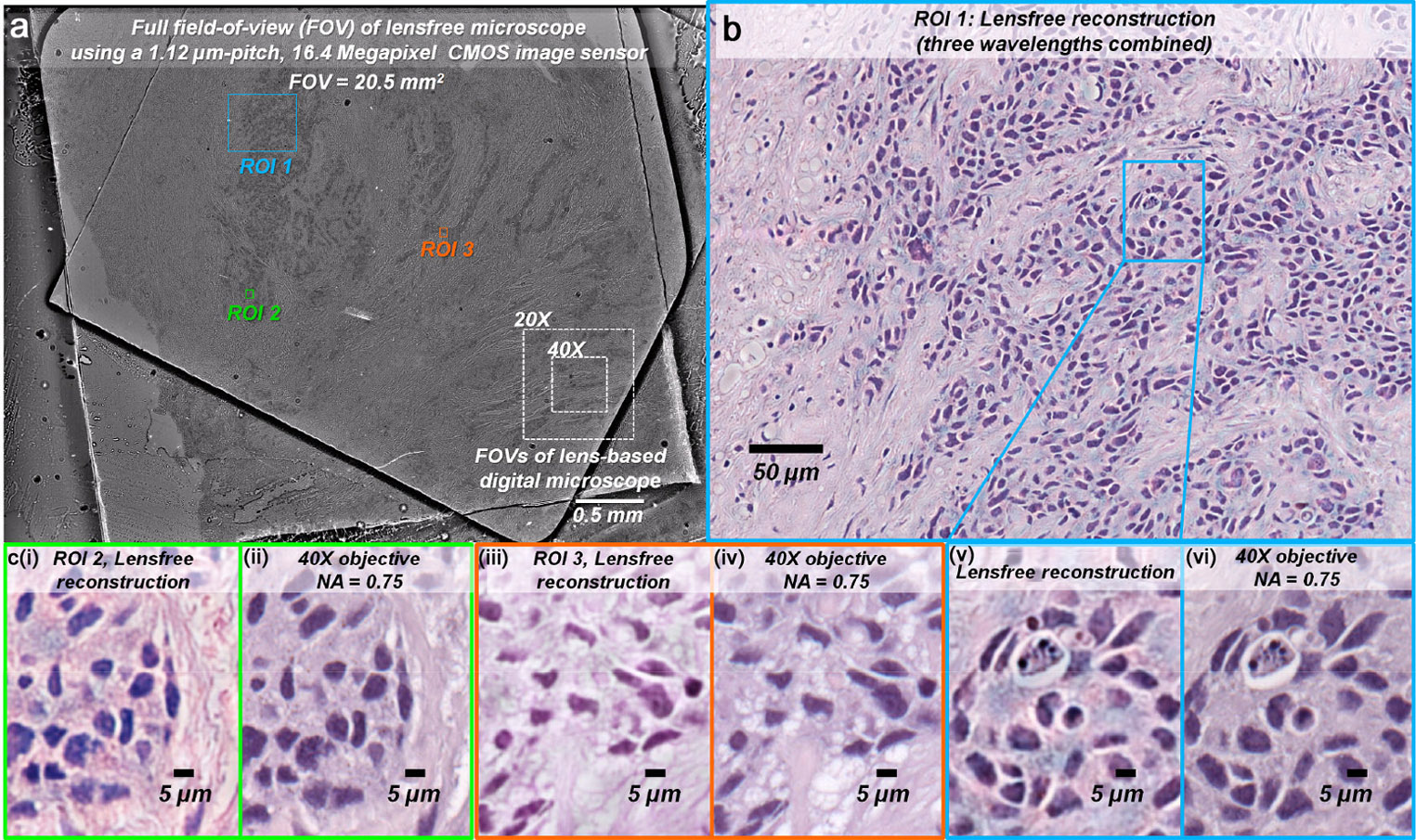 Compared to lens-based synthetic aperture microscopy,6 LISA is more compact and possesses greater cost-effectiveness due to its on-chip imaging geometry. The phase retrieval in LISA does not require a sparse sample7 or mechanical components with which to vary the sample-to-sensor distance.8 Moreover, since the reconstruction process in LISA extensively relies on fast Fourier transforms, it is highly parallelizable. The sample FOV can therefore be divided into smaller sub-regions and reconstructed in parallel using graphics processing units.

In summary, we have developed a lens-free on-chip microscope that adopts a synthetic aperture approach. Retaining the simplicity, compactness, and cost-effectiveness of lens-free on-chip microscopy, LISA achieves a high NA of ∼1.4 over a large FOV of ∼20 mm2 and robust phase retrieval, even for lens-free reconstruction of dense samples, including pathology slides. In future work, we intend to implement LISA on parallel computing platforms to boost reconstruction speeds. We also plan to integrate the optical setup into a compact and cost-effective design, allowing LISA measurements to be performed using a handheld device capable of operating in resource-limited environments.

Aydogan Ozcan is the Chancellor's Professor at UCLA and a Howard Hughes Medical Institute (HHMI) Professor at HHMI, Maryland. He leads the Bio- and Nano-Photonics Laboratory at UCLA School of Engineering and is also associate director of the California NanoSystems Institute.