Recent research into group III-nitride semiconductors and their heterostructures has enabled the development of highly efficient optoelectronic devices, such as LEDs, lasers, transistors, sensors, and solar cells. These advances have been made possible by the superior chemical resistance, stable luminescence, and tunable direct bandgap inherent to this class of semiconductor. There are, however, several difficulties that must be overcome on the route toward wider adoption.

Among these challenges, high-density threading dislocations (crystal line defects generated by the strain that arises due to mismatches between the lattice constant and the thermal expansion coefficient) in conventional gallium nitride (GaN) epilayers and heterogeneous substrates must be reduced. These defects can act as non-radiative and scattering centers, adversely affecting electron transport and thereby proving detrimental to the performance of GaN-based devices. Additionally, total internal reflection occurs at the interface between the GaN film and air, resulting in only 4% of the light generated inside the GaN film escaping. Moreover, due to large piezoelectric polarization, indium GaN/GaN (InGaN/GaN) heterostructures grown along the polar axis (c-axis) suffer from high built-in electric fields (several MV/cm).

Employing nanostructure geometry offers a way to reduce these problems. GaN nanostructures formed on heterogeneous substrates have a reduced dislocation density, due to the free-surface-induced strain relaxation which occurs as a result of the large surface-to-volume ratio. The geometry also gives rise to efficient light scattering, thereby enhancing light extraction efficiencies. Furthermore, because the GaN/InGaN core-shell heterostructures are grown on the non-polar and semi-polar facets of the GaN nanostructures, the built-in field is reduced. Due to the high surface-to-volume ratio of the core-shell structure, the active region area of its heterostructure is much larger than that of conventional epitaxial film. This allows the efficiency droop issue in LEDs to be mitigated by reducing the carrier density inside the active region and increasing the absorption in solar cells.

Using top-down chemical vapor-phase etching (CVE) and a bottom-up self-organized growth method, we successfully fabricated various GaN nanostructures.1, 2 Figures 1(a) and (b) show scanning electron microscopy images of top-down GaN nano-obelisks (NOs) and bottom-up GaN nanorods (NRs), respectively. During CVE, we exposed a 2μm-thick GaN epilayer to 1000 standard cubic centimeters per minute of hydrogen chloride gas at a high temperature (around 1000°C). Due to the facet- and defect-selective etching characteristics of the CVE, highly reactive dislocations in the GaN epilayer were eliminated first. The remaining nanostructures were shaped like obelisks with an improved crystal quality and reduced strain compared to the non-etched GaN epilayer. Figure 1(c) shows the photoluminescence (PL) spectra of the NOs and a reference sample (a GaN epilayer). The significant increase in peak intensity of the GaN donor-bound exciton indicates improved crystal quality and enhanced light efficiency in our NOs. Additionally, the redshift of the peak shows a reduction of the residual compressive strain on GaN. 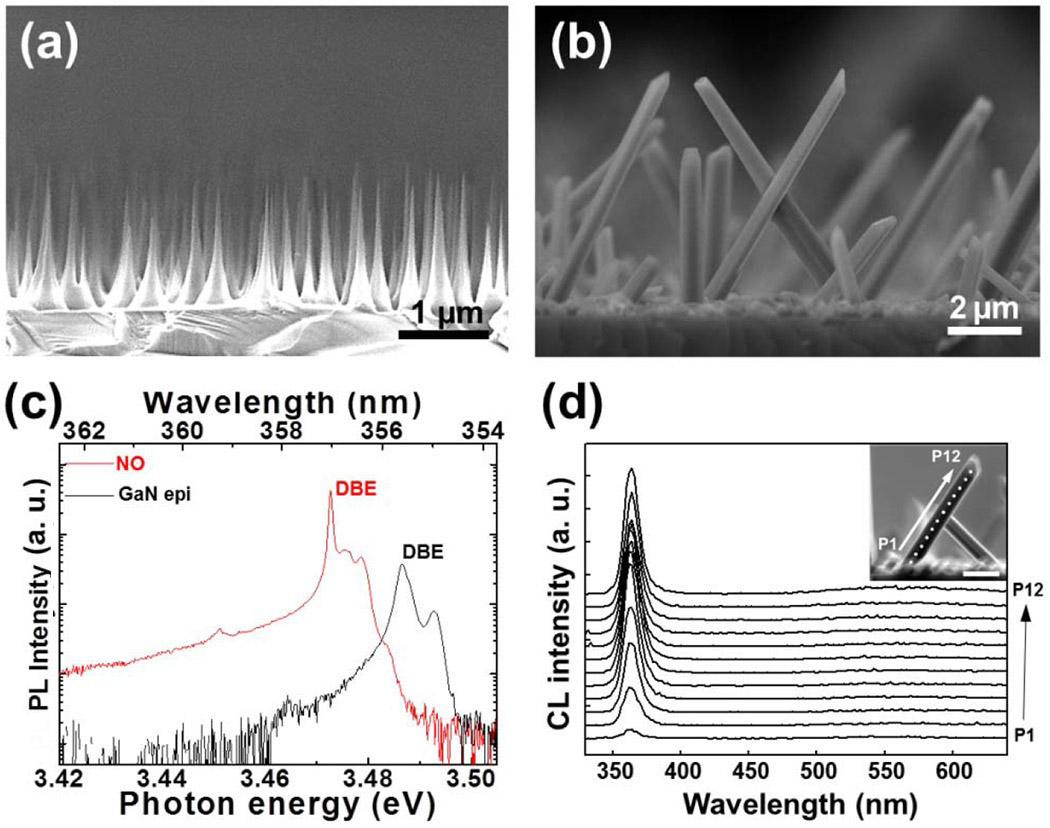 After the growth of the GaN core nanostructure, we regrew an InGaN quantum well (QW) and GaN barrier by using MOCVD to form a GaN/InGaN core-shell structure. Figures 2(a) and (b) show the cross-sectional transmission electron microscope images of the InGaN QW structures on the GaN NOs and the self-organized GaN NRs, respectively. We found that the QW thickness on the GaN NOs can be varied depending on the QW growth time and the number of facets. The surface energy of the QW (related to the growth rate of these facets), in addition to the large variations of QW thickness, contributed to broadband light emission. The strength of this emission depended on the location of the QW along the core-shell nanostructure—see Figure 2(c)—resulting in overall white light generation: see Figure 2(d).2

The location of the QW on the GaN NR is significant in terms of the bandgap gradient along the height of the nanostructure: see Figure 2(e). This is due to the different QW thicknesses along the growth direction—see Figure 2(b)—as well as the different surface migration lengths between gallium and indium atoms. Generally, because indium atoms have longer diffusion lengths than gallium atoms, the indium molar fraction inside the QW increases with the distance between the QW and substrate. The resulting large bandgap gradient along the length of the core-shell NR contributed to asymmetric light propagation due to the different absorption coefficients along two opposite directions of the NR—see Figure 2(f)—showing a nonlinear photonic diode behavior.1

Furthermore, we found that the QW peak intensity along the height of the GaN/InGaN core-shell nanostructure did not degrade with an increase to the thickness of QWs and/or the indium molar fraction. This was due to the reduced quantum-confined Stark effect (QCSE) inside QW-grown non-polar and semi-polar facets. In contrast, the InGaN QWs grown on the c-plane GaN had a QW peak intensity that degraded with increasing QW thickness and/or indium molar fraction, due to a strong QCSE. This effect describes the impact of the electric field on the electronic and optical properties of the QW. The large built-in electric field in c-plane InGaN/GaN QW caused electrons and holes to be separated on opposite sides of the well. As a result, the electron-hole wavefunction overlap decreased, reducing the recombination efficiency in the QW. The GaN/InGaN core-shell nanostructures with negligible QCSE could therefore play an important role in improving the efficiency of various optoelectronic devices.

In summary, we demonstrated unidirectional light propagation and broadband white light generation from GaN/InGaN core-shell nanostructures. These properties arise for two reasons: varying QW thicknesses (which occur due to the difference in growth rate between facets and in the diameter of the GaN core nanostructure) and the variation of indium molar fraction inside the QW along the height of the nanostructure (caused by the different surface migration lengths between gallium and indium atoms). In future work, we plan to interconnect several GaN/InGaN core-shell nanostructures as photonic components for low-loss photonic signal processing.

Reproduced with permission from The Royal Society of Chemistry.2

Yong-Hoon Cho received his PhD degree from the department of physics, Seoul National University, Korea in 1997. He is currently a KAIST Chair Professor at the department of physics and the director of the KAIST Center for LED Research. He has more than 200 refereed international publications and more than 280 international conference presentations.