Schottky diodes have a long history of use in the terahertz (THz) frequency range for the generation of THz power. They have been a key enabling technology for many of the pioneering measurements in radio astronomy, molecular spectroscopy, and plasma diagnostics that helped to open the THz field.1–5 Continued developments in these applications and the advent of new ones (e.g., imaging and electron spin resonance/dynamic nuclear polarization) have led to a steady increase in the desired THz power. As one example, in astronomy there has been considerable interest in heterodyne focal plane arrays to speed up observation time. However, an array of M elements requires roughly M times the local oscillator power, thus putting ever-increasing demands on THz sources.

To generate high output power, the nonlinear capacitance of the Schottky diode is typically used, since the intrinsic conversion efficiency of variable reactance (varactor) devices is high. For example, varactor multipliers may reach efficiencies of 50–70% at millimeter wavelengths. Achieving this high efficiency requires careful circuit tuning, however, and consequently the bandwidth of these high-efficiency multipliers is limited to about 15–20%.

Another important specification for THz sources is their spectral purity. Through the use of balanced designs that we and others have developed,8, 9 the output power of these sources is dominated by the desired output frequency, with other signals typically 20dB or more below the main tone. Figure 1 shows a summary of solid-state THz sources ranging from Schottky multipliers and amplifiers to cryogenically cooled quantum cascade lasers and other sources (Gunn diodes, resonant tunneling diodes, photomixers, and so forth). As is evident in the figure, Schottky diode multipliers play a key role in generating THz signals. 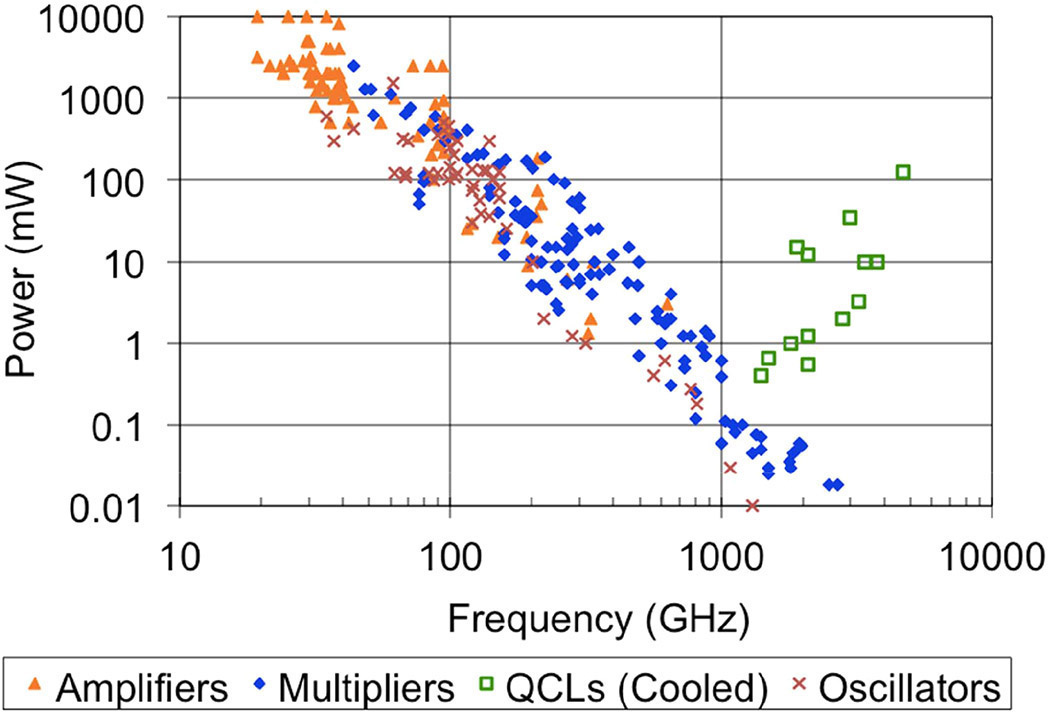 Regarding the linewidth of THz sources, an important factor is that frequency multipliers act as both frequency and phase multipliers. As a result, the phase noise at the multiplier output is increased by a theoretical 20*log(N), where N is the overall multiplication factor from the base oscillator to the output. As an example, a 264GHz source with multiplication factor N=24 requires a base oscillator at 11GHz, which will have a typical phase noise of −95dBc/Hz at 1kHz offset. The phase noise at 264GHz will be ∼28dB higher than the base oscillator, i.e., −67dBc at 1kHz offset. This narrow bandwidth allows narrowband filtering and high dynamic range for heterodyne THz transceivers using these sources.

Figure 2 shows a photograph of a 264GHz source we have developed at Virginia Diodes using Schottky diode technology. The base oscillator at 11GHz is fed into an MMIC (monolithic microwave integrated circuit) premultiplier and amplifier, with an output frequency of 33GHz and a saturated output power of 3W. This MMIC is the final active stage in the chain, and after this there are only Schottky diode multiplication stages. For this system there are three high-efficiency Schottky varactor multipliers with outputs at 66, 132, and 264GHz, producing a peak output power of 90mW. 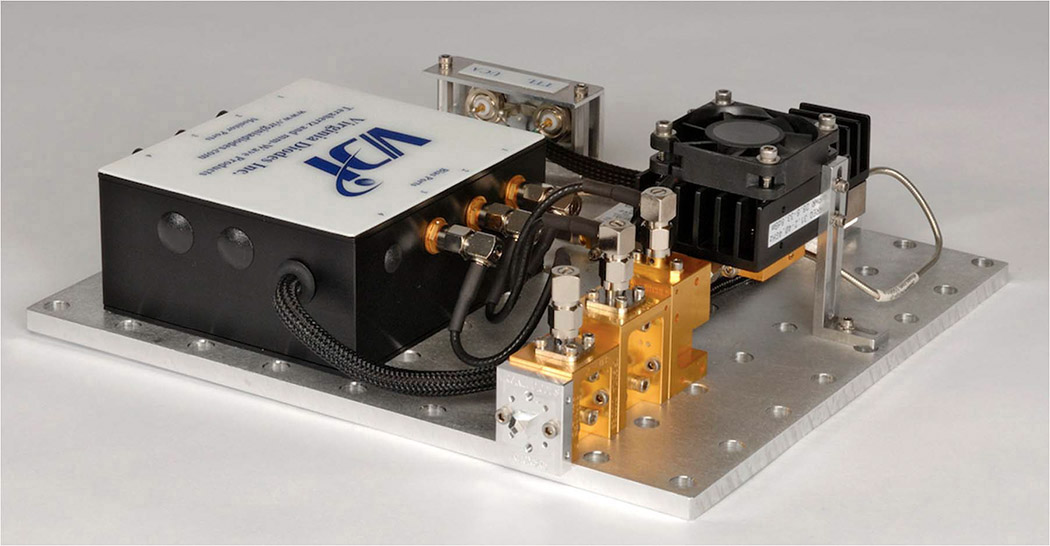 In addition, these high-power sources can be used to drive subsequent THz multipliers. For example, the 264GHz source described above can be used to drive a Virginia Diodes tripler to achieve 1mW of output power at 790GHz. By cascading two triplers, power up to 3THz can be generated with microwatt power levels.

There is still considerable room for improvement in these multiplier-based sources. One exciting new development is the considerable recent progress in millimeter-wave amplifiers.10, 11 The combination of these new amplifiers with the Schottky multipliers promises a dramatic increase in power levels at THz wavelengths. For example, with these new technologies we have developed a 500–750 GHz source with 0.4mW typical over the band, which is about 10 times the power previously achieved. Future work will focus on significantly enhancing the performance of other broadband THz sources and receivers.

Jeffrey L. Hesler is the chief technology officer of Virginia Diodes and a visiting research assistant professor at the University of Virginia. His career is focused on creating new technologies that are making possible the full exploitation of the THz frequency band for scientific, defense, and industrial applications.