Organic light-emitting devices (OLEDs) have arrived. The unsurpassed visual performance and slim form factors of OLED products have been warmly welcomed by consumers. You can find glass-based AMOLED (active-matrix OLED) displays in a range of products, from mobile phones, to tablets, to the new large-sized ultra-high-definition TVs.

Another major milestone for the industry occurred with the commercial launch of OLED displays made on plastic in late 2013. This paved the way for innovative display applications such as flexible displays. Although still in its infancy, flexible OLED applications represent a tipping point for novel form factor products that will be highly differentiated from their current glass equivalents, both for displays and lighting. In fact, flexible OLED displays could become the ideal display technology for the fast-growing market of wearables and other consumer products.

OLEDs are solid-state devices that directly convert electricity to light. In general, they are produced in large-area formats, offering a vibrant spectrum of colors on a range of substrates, including glass, metal, and plastic. Using phosphorescence,1 the conversion efficiency of these devices is excellent. For example, current OLED lighting panels2 are approximately 80lm/W and are expected to reach 120lm/W over the next two to three years, enabling OLED luminaires to have energy savings comparable to those of LED fixtures.

Universal Display Corporation (UDC) has been a pioneer in the development and commercialization of phosphorescent OLED technology and materials, delivering OLEDs that convert close to 100% of the current provided to a device into light.3 Over the past decade, we have advanced the materials for our cutting-edge red, green, yellow, and light blue commercial emitter-host systems, with a range of colors and external quantum efficiencies close to the theoretical limit (see Figure 1). This advance has enabled OLED displays to have lower power consumption than active-matrix LCDs (for most applications). As the proliferation of mobile OLED displays continues, OLED TVs are beginning to enter the marketplace. OLED TVs are considered the optimal display, with stunning visual performance on account of its excellent color gamut, high contrast ratio, wide viewing angle, lack of motion blur due to inherent fast response time, and very thin form factor. 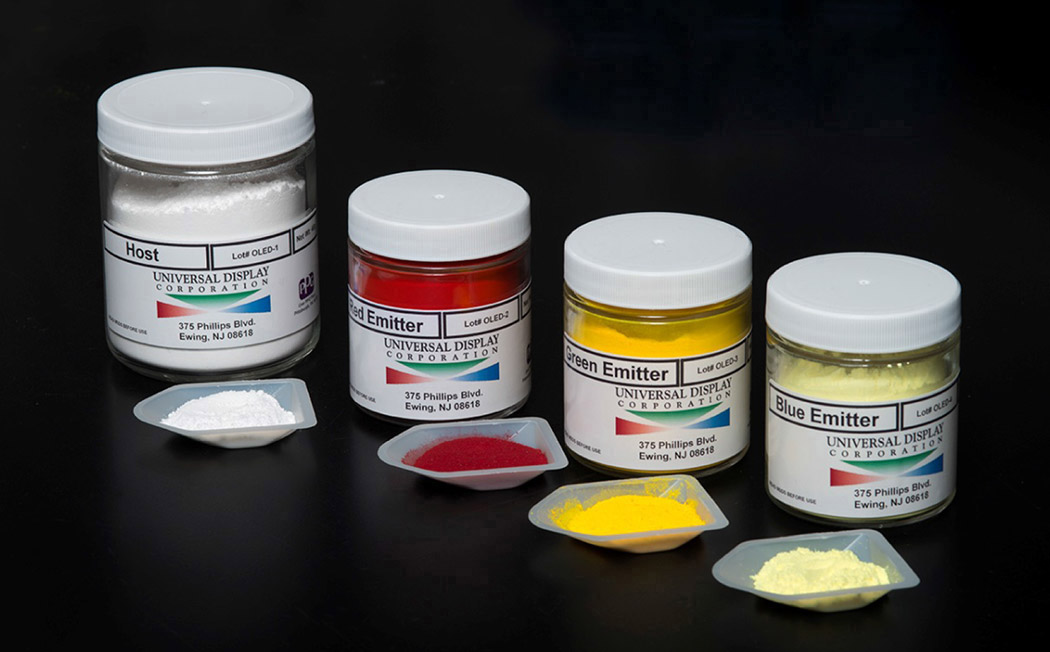 While constantly expanding the range and performance of our phosphorescent materials, particularly increases in efficiency, lifetime, and emitter color tuning, our global research and development team is also inventing and developing supporting technologies for the next generation of OLED products, namely, low-cost flexible displays and TVs. OLEDs degrade in the presence of oxygen and moisture, so we have been developing flexible and transparent thin-film encapsulation solutions to produce long lifetime flexible OLED products. These barrier films must be extremely impermeable to oxygen and moisture (<10−6 g/m2/day). Although many multilayer barrier films consist of very thin inorganic barrier films sandwiched between flexible organic films,4 we have developed a unique single-layer barrier film that has composite properties of both inorganic and organic films in one single film.5 This greatly simplifies the manufacturing process and is expected to reduce production costs.

OLED TV production is currently being scaled to larger-sized substrates to further reduce costs, and manufacturers are evaluating ways to evolve a range of current and potential future production processes. One approach uses large-area deposition of white OLEDs onto a substrate with individual colors defined through the use of color filters.6 The direct patterning of small OLED subpixels over large areas provides opportunities for new patterning technologies and display architectures. The current process of choice is to use OLED devices made from thermally evaporated small-molecule organic materials, and then define the subpixels by evaporating through a high-resolution shadow mask placed close to the substrate. One of our key projects is advancing organic vapor jet printing (OVJP), originally invented by Stephen Forrest,7 whereby the small-molecule OLED materials are jetted toward the substrate in a carrier gas, allowing high-resolution pixels to be printed directly from the gas phase (see Figure 2). Another approach to patterning TVs uses just two OLED depositions,8 blue and yellow, and then filters the yellow to produce red and green. This approach has the benefit of only requiring low-resolution masking while maintaining the same efficiency and improved lifetime as conventional red, green, and blue (RGB) OLED displays. 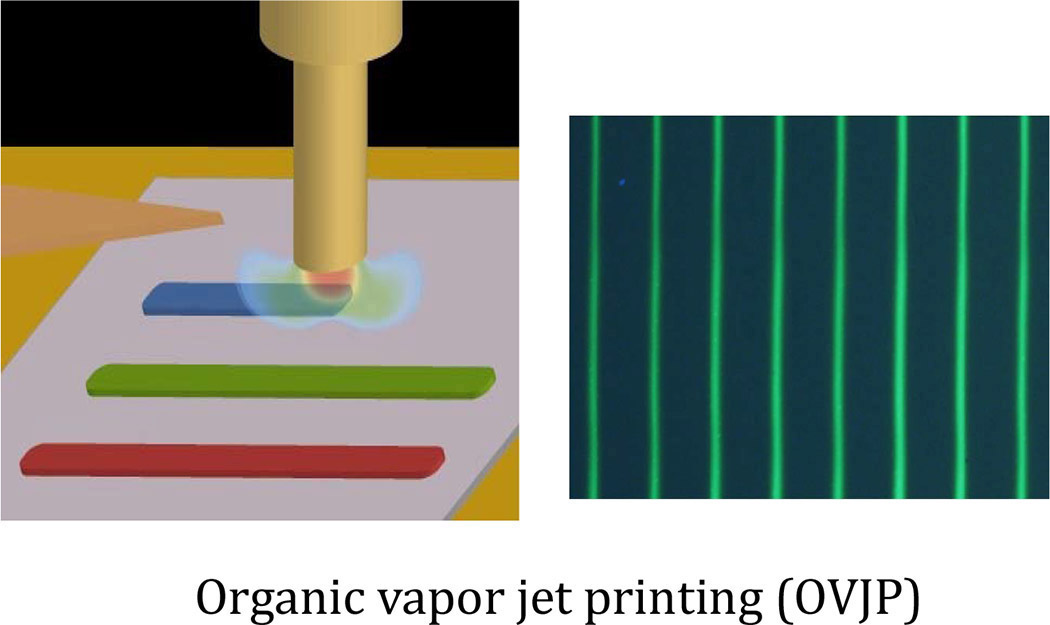 Figure 2. Illustration of printing OLED lines by OVJP and a photograph illustrating the results.

With the OLED display industry soon expected to exceed $15 billion per year, OLED lighting is poised for success as well. Early entry products are gaining consumer awareness and excitement. This can lead to expanding the OLED product roadmap, price reductions through increased production volumes, and further market adoption. We are constantly innovating to produce the best technology to advance the performance of OLED products, lower manufacturing costs, and drive continued industry growth. We have formed a network of partners and collaborators to ensure that the OLED ecosystem is strong and meets the ever demanding challenges of the display and lighting industries.

Michael Hack is vice-president and general manager of OLED Lighting and Custom Displays at Universal Display Corporation. He received his PhD from Cambridge University, United Kingdom, in 1981. In 2007 he was elected a fellow of the Society for Information Display.