Quantum cascade laser-based mid-IR spectrometers are used to detect threats in the air, and on various surfaces, at both short and long standoff distances.

The standoff detection and identification of chemical threats is commonly considered to be the ‘holy grail’ of detection instruments. Standoff techniques enable detection of chemical threats without contact. The possibility of contamination (for operators and/or equipment) is thus avoided, and the need for subsequent decontamination is eliminated. In addition, standoff detection of explosives allows identification of threats from safe distances, i.e., outside the blast zone. There are now ongoing efforts to extend these methodologies to biological threats.

For several decades, Block MEMS LLC has been developing standoff detection systems that are based on mid-IR (MIR) spectroscopy. The company also produced the first modern version of the Fourier-transform IR (FTIR) spectrometer. Several Block standoff detection systems—based on the FTIR spectrometer—are used to protect critical infrastructure in the United States (e.g., at the Pentagon). Compared with other parts of the optical spectrum (e.g., UV, visible, near-IR, and short-wave IR), the MIR enables higher sensitivity detection and higher specificity identification of a wide range of chemicals.1, 2 Laser-based systems, however, have higher sensitivity than passive MIR detection systems that use ambient thermal radiation. As such, laser-based systems can be used under a wider range of environmental conditions (e.g., indoors and outdoors).3, 4 Laser-based standoff methods—based on Raman spectroscopy and laser-induced breakdown spectroscopy—have also been used with success, but these require the use of lasers that are not eye-safe (an important consideration for many standoff detection systems).5

In response to the growing need for standoff detection systems with enhanced capabilities, we recently introduced new technology that is based on quantum cascade lasers (QCLs). These lasers operate in the MIR portion of the optical spectrum, where almost all chemicals have strong and unique absorption features. QCLs substantially extend the capability of well-known and proven MIR spectroscopy instruments. Our company is a leader in the use of QCL-based MIR spectroscopy for standoff detection applications, and we have produced several new products that use this technology.3, 6 It is important to emphasize that all our QCL-based systems are also eye-safe.

With our standoff detection systems, we take advantage of several key advancements in wavelength-tunable QCL technology. First, the QCLs that we use in our products are widely tunable and can cover a spectral range of more than 1000cm−1 in a single unit, anywhere within the feature-rich 5–13μm wavelength range. Second, our QCLs can tune at very high speeds to allow real-time detection and handheld operation. Third, we package and seal the QCLs in extremely compact modules. This means that the overall size, weight, and power consumption of a complete system can be dramatically reduced.

We recently presented results for our latest standoff detection technologies and their applications.7 Our LaserWarn system (see Figure 1) can be used to protect critical facilities (e.g., embassies, federal buildings, shopping malls, and transportation terminals) against chemical attacks. With this system, we create an invisible tripwire-like mesh. Any threatening chemical cloud that crosses this laser beam is instantaneously identified, which triggers established security protocols for the protection of the venue. This detection system has no consumables and can be set up for automated, unattended 24/7 surveillance and protection of the selected facility. We also provide built-in libraries of chemical threats, which can be used and expanded by a user as necessary. 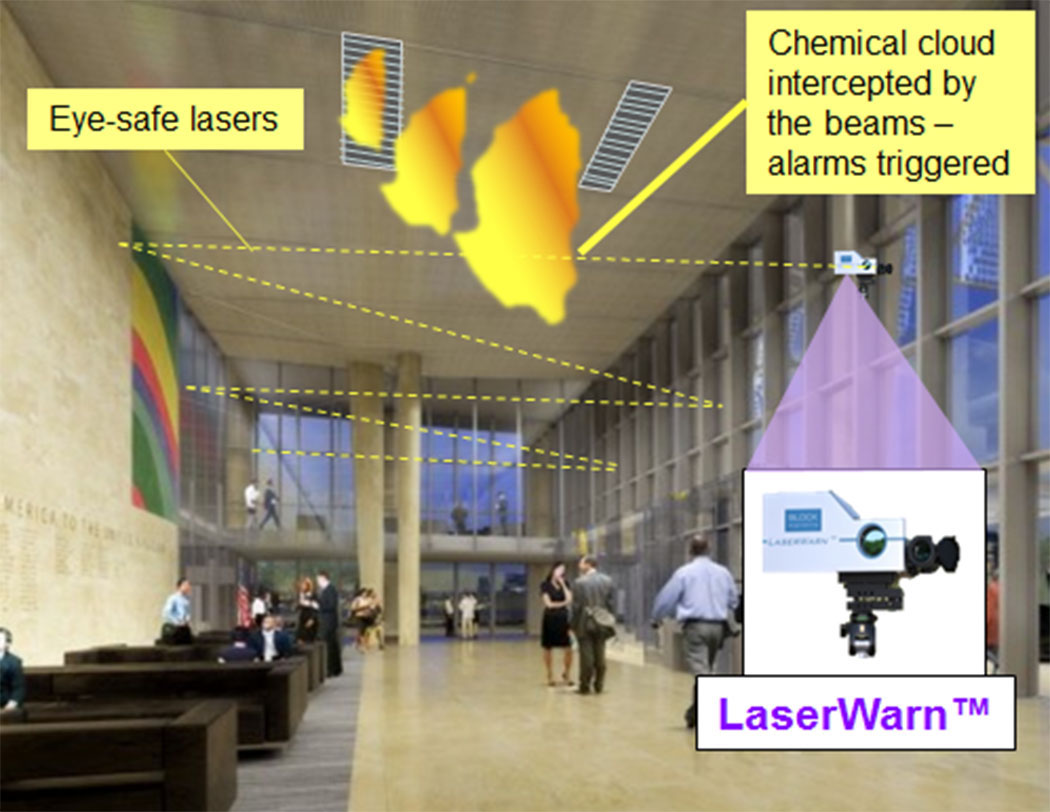 Figure 1. Artist's illustration of the LaserWarn system. Eye-safe lasers create an invisible beam that is used to detect chemical threats in the air. This system can be used for 24/7 protection against chemical attacks.

Another of our standoff detection systems—LaserScan—is illustrated in Figure 2. This portable system is used to detect chemicals on surfaces by illuminating the surface with wavelength-tunable QCLs and analyzing the reflection spectrum for features that indicate the presence of a trace chemical threat. These threats may include chemical warfare agents (e.g., methyl salicylate), explosives, or bacteria (e.g., Bacillus thuringiensis, Escherichia coli, or Staphylococcus epidermis).8 A detection algorithm (based on principal component analysis of the reflection spectra) is able to clearly distinguish between all three types of bacteria on wood, steel, and luggage substrates (see Figure 2). We have also conducted a series of tests at government facilities using the LaserScan system. We were able to detect and identify a wide range of chemical agents and explosives on various substrates (e.g., asphalt, cement, plastics, and metals). The typical standoff distance for the LaserScan system is 6–12 inches, but we can offer other distances by selecting different front-end optics for the system. Our LaserScan-DE instrument is another version of this system (see Figure 3). The LaserScan-DE is designed for use by dismounted soldiers for real-time standoff detection of ‘disturbed earth,’ which can indicate the presence of a buried improvised explosive device. 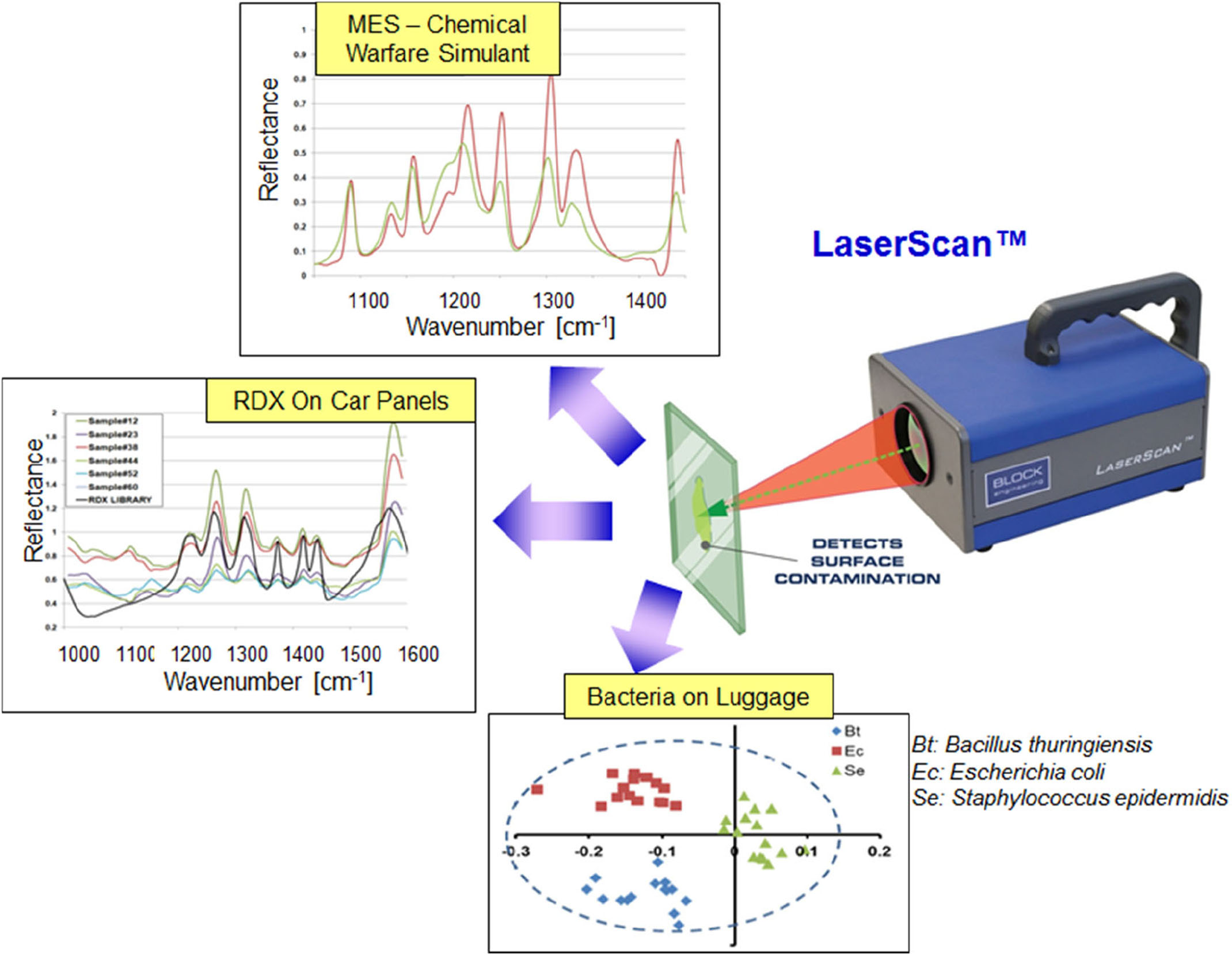 Figure 2. Illustration of the LaserScan detection system. Mid-IR spectroscopy is used to detect chemical warfare agents (e.g., methyl salicylate, MES), explosives (e.g., Research Department explosive, RDX), and bacteria on various surfaces. The lower plot shows that a detection algorithm (based on principal component analysis of the reflection spectra) can be used to clearly distinguish between three types of bacteria on luggage. 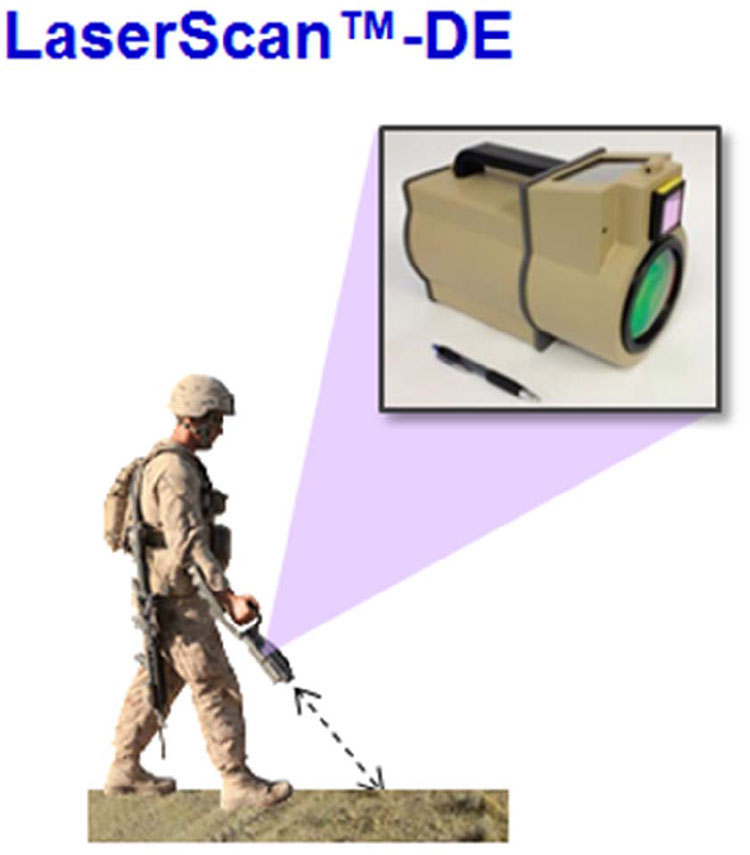 Figure 3. Illustration of a dismounted soldier scanning the ground for disturbed earth (DE), which can be an indicator of a buried improvised explosive device. The LaserScan-DE instrument is designed for this purpose.

We have developed a series of standoff detection instruments that can be used to identify chemical, explosive, and biological threats. These are based on our advanced widely tunable QCL technology, which enables real-time and high-sensitivity detection. Several of our systems are portable and support handheld operations. We believe there are many applications—both governmental and commercial—which require sensitive standoff detection of chemicals, and we are adapting our QCL technology for use in these applications. Furthermore, we are currently pursuing the incorporation of our QCLs into hyperspectral imaging systems to enable even higher-sensitivity chemical detection.

Petros Kotidis is the CEO of Block Engineering and has several decades of experience in the photonics industry. He previously held senior management positions at Axsun, Nortel, and Textron. He has a PhD and MS from the Massachusetts Institute of Technology and a BS in mechanical engineering from the National Technical University of Athens, Greece. He has also been awarded 21 patents.

Erik Deutsch obtained his PhD in electrical engineering from the Massachusetts Institute of Technology and his BA in physics from Vassar College. He was a co-founder at Polychromix, where he oversaw the development of all MEMS (microelectromechanical systems). He has extensive experience with micro-optical devices and has played a large part in their design, development, and commercialization. He led all engineering efforts at Block and is also responsible for bringing new MEMS and laser-based instruments to the marketplace.

Anish Goyal has a PhD in electrical and computer engineering (specializing in solid-state device technology) from the University of California, Santa Barbara. He obtained his BS in electrical and computer engineering from Rensselaer Polytechnic Institute. He joined Block from the Lincoln Laboratory at the Massachusetts Institute of Technology, where he was a member of the technical staff in the Laser Technology and Applications Group. He leads all aspects of technology development, assessment, as well as the demonstration of new commercial and government applications, and the establishment of corporate technology strategies.