Liposomes are spherical particles comprising single or multiple concentric lipid bilayers commonly referred to as lamellae.1  Liposomes are used for drug delivery to specific sites in the body, and are usually fabricated by hydrating phospholipid films.  Following hydration, liposomes can be loaded with reagents of interest, surface functionalized for targeted drug delivery, and tailored in size for more efficient delivery.

The effectiveness of nanotherapeutic delivery strongly depends on particle size.2 The immune system can rapidly remove colloidal drug delivery particles by activating the complement system and by cells of the mononuclear phagocyte system. To evade such immune responses, nanoscale particles are required. Furthermore, the leading strategy for delivery to tumor sites is through the enhanced permeability and retention effect. That is, the vascular network surrounding a tumor site is known to be highly leaky because of enhanced requirements for oxygen and nutrients by the tumor. As a result, gaps between the thin layer of cells lining the interior surface of blood vessels can reach a couple of micrometers in size. Thus, nanoparticles are able to preferentially accumulate at tumor sites.

An automated nanoparticle preparation platform— encompassing synthesis, functionalization, loading, and characterization in a total analytical system—would benefit drug delivery by liposomal nanocarriers.3 Miniaturizing such a device would indeed also improve performance in several ways from faster response times to reduced reagent consumption. Furthermore, such a device would expedite and stimulate the study of several aspects of liposome preparation and activity in both academic and industrial settings where fast prototyping is required. We have investigated the use of femtosecond laser direct writing for just such a device. In particular, we considered the advantages and disadvantages of two-photon polymerization (TPP) and femtosecond laser irradiation followed by chemical etching (FLICE).4, 5

TPP and FLICE are unique techniques for the microfabrication of 3D structures. TPP can construct polymer objects with complex geometries and sub-100nm feature sizes (see Figure 1). With FLICE, large areas of glass can be quickly patterned with micro-channels of arbitrary shapes (see Figure 2). Nonetheless, neither of these two direct laser writing techniques alone has the capacity to produce all the device components required. We propose to leverage the strengths of each technique. For example, in the extrusion process for rendering liposomes smaller and more uniform, FLICE can create a network of micro-channels within a glass substrate with included inlets and outlets, while TPP can create the filters where liposome extrusion occurs. 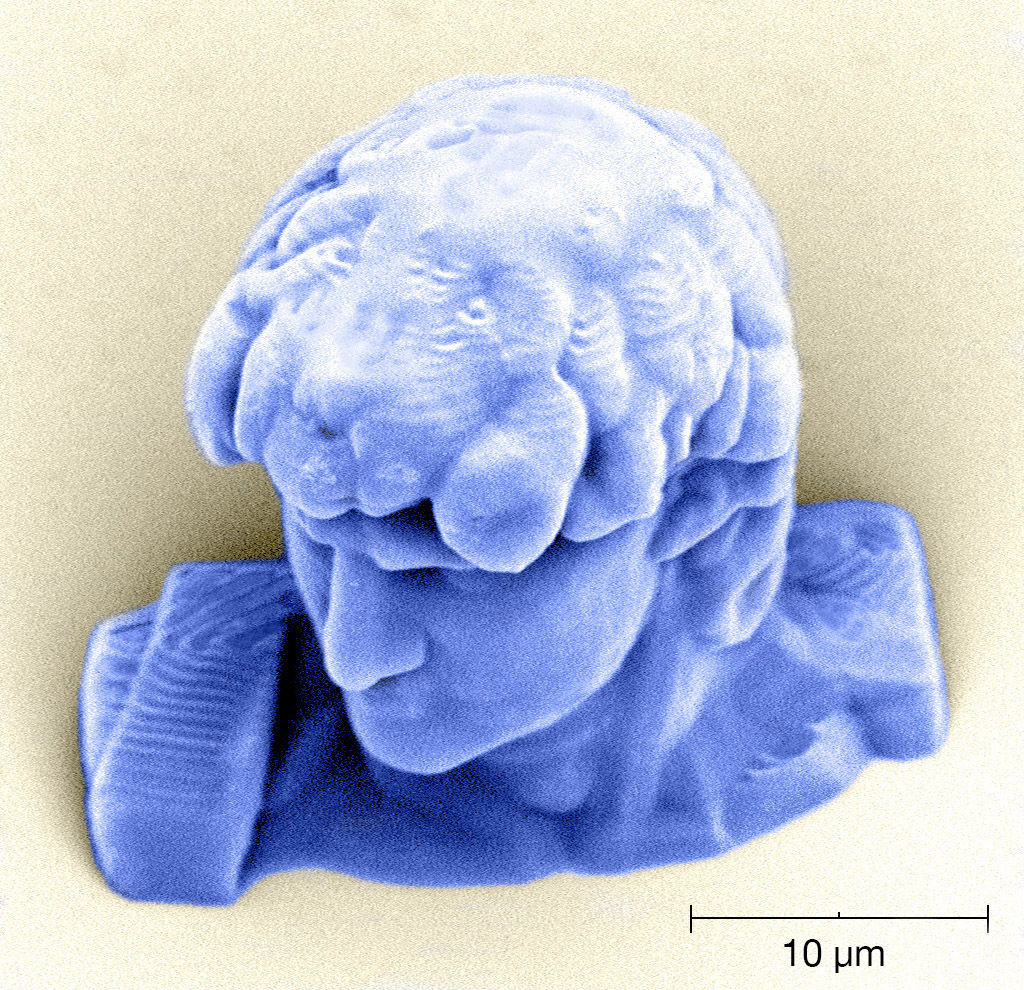 Figure 2. (a) Top view of five channels fabricated by femtosecond laser irradiation followed by chemical etching (FLICE). Each channel was made with a single laser pass. The red dotted line indicates the edge of the glass substrate. (b) Scanning electron microscopy (SEM) image of the entrance of one of these channels. The scale bars in (a) and (b) are 50μm and 10μm, respectively.

Our approach has some challenges that need to be addressed before a test device can be realized. For example, high pressures through the extrusion microfilters (see Figure 3) are required to shrink larger liposomes to the desired size. The polymer used in TPP must be sufficiently strong to sustain these pressures without deforming. More importantly, the adhesion between the fused silica and polymeric microstructures must also be sufficiently strong to keep the polymeric microstructures anchored to the glass micro-channels. The photosensitive resins used for TPP are typically highly viscous or, in some cases, solid, and filling the glass micro-channels with these materials can be challenging. Thus, it would be desirable to develop TPP resins with lower viscosities that still maintain the writing precision and accuracy required by this application.

Figure 3. (a) SEM images of a polymeric filter for liposome extrusion. (b) Magnified view of the filter sieve.

By employing a MEMS-based force-sensing probe system, we characterized the stiffness (Young's modulus) of polymeric microstructures fabricated by TPP and their adhesion properties to glass surfaces (see Figure 4).6 The mechanical properties of these microstructures were adequate for liposome extrusion with no failure at the low and middle range of pressures typically used (10–200psi). Furthermore, we studied novel negative-tone resins possessing viscosities two- to fourfold smaller than the viscosity of typical TPP resins. These new resins not only enabled straightforward TPP fabrication of microstructures but also allowed us to produce smaller polymeric feature sizes. 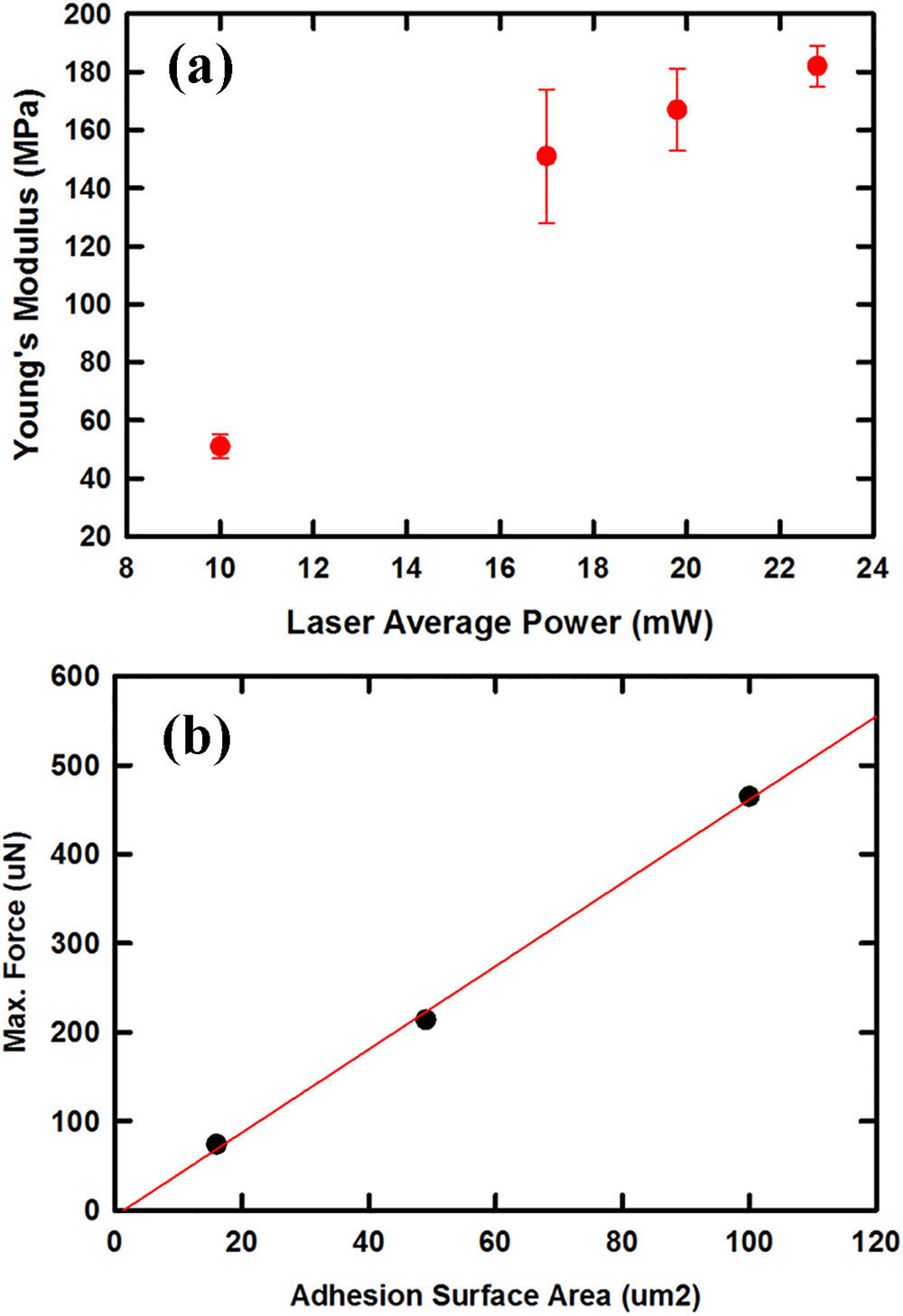 Figure 4. Mechanical properties of microstructures fabricated by TPP. (a) Plot of Young's modulus versus average laser power used to perform TPP. (b) Plot of maximum force required to dislodge a microstructure from a glass substrate versus adhesion area.

In summary, we have investigated the use of two direct laser writing techniques to fabricate microfluidic devices for liposome extrusion. Both fabrication techniques are intrinsically 3D freeform processes: TPP fabricates complex polymeric microstructures with fine features; and FLICE creates large networks of micro-channels in fused silica. We characterized the mechanical properties of the resulting polymeric microstructures and found them suitable for use under typical liposome extrusion conditions. An additional advantage of our approach is that TPP and FLICE are implemented using the same hardware, making prototyping and testing easy to accomplish. In our future work, we will manufacture a complete microfluidics system using a combined microfabrication approach with TPP and FLICE. The device will be tested for liposome extrusion. The influence of filter topologies on the efficiency of liposome sizing will be the main focus of our efforts.

Tommaso Baldacchini is a staff scientist in the Technology and Applications Center at Newport Corporation where he conducts research in micro- and nano-fabrication using femtosecond laser direct writing.

Ruben Zadoyan is a senior director of the Technology and Applications Center. His main interests are nonlinear optics, time-resolved ultrafast spectroscopy, and laser-matter interaction.