Atomically thin 2D materials are emerging as a new frontier of materials science. They offer ultimate thickness scaling for nanoelectronic devices that could substantially improve electrostatic control and enable a number of low-power versatile applications, such as ultra-thin-channel field-effect transistors, optoelectronic devices, and solar cells.1 Graphene, the archetypal 2D material, cannot be used in conventional transistor technology because of the inherent difficulty of opening an electronic bandgap in this gapless material. Typically, the chalcogenides (that is, sulfides, selenides, and telluride), with bandgaps comparable to those of conventional group IV or group III–V semiconductors, may have the potential of scaling down to a truly atomic scale. However, in practice these materials are challenging to integrate with existing silicon-based electronics.

Silicene and germanene, graphene's cousins, i.e., novel silicon and germanium 2D allotropes with a honeycomb structure, offer tantalizing prospects to achieve the ultimate in miniaturization with direct compatibility with silicon technology. Only a few years ago, silicene and germanene were just a theorist's dream.2, 3 However, we created silicene in our lab in Marseille on a silver substrate three years ago4 and germanene, last year, on a gold template.5

In theory, freestanding silicene and germanene have a lightly buckled honeycomb structure with mixed sp2/sp3 hybridization (unlike graphene, which is purely sp2 hybridized and flat), but they do not exist in nature.3 Graphene has a parent crystal (graphite), but this is not the case for silicene or germanene. Consequently, we synthesize them in situ under ultra-high-vacuum conditions by silicon or germanium sublimation onto, typically, silver (111) or gold (111) single-crystal surfaces (111 describes which surface). In proper growth conditions, at rather low growth temperatures (about 220°C), epitaxial monolayer sheets are formed on these substrates with modified corrugation compared to the theoretically predicted freestanding materials, favored by the low stiffness of these 2D sheets.

For the first silicene layer, the prototype phase formed on silver (111) has a 3×3 reconstruction—4×4 with respect to the underlying silver (111) surface—as revealed in scanning tunneling microscopy images, which show a beautiful ‘flower pattern’ (see Figure 1). (A 3×3 reconstruction means that for this phase the silicon atoms adopt a pattern that is three times larger in each high-symmetry direction than for theoretical pure freestanding silicene.) This flower pattern is modeled in Figure 2, which reveals the corrugated honeycomb arrangement within the 3×3 silicene unit cells. 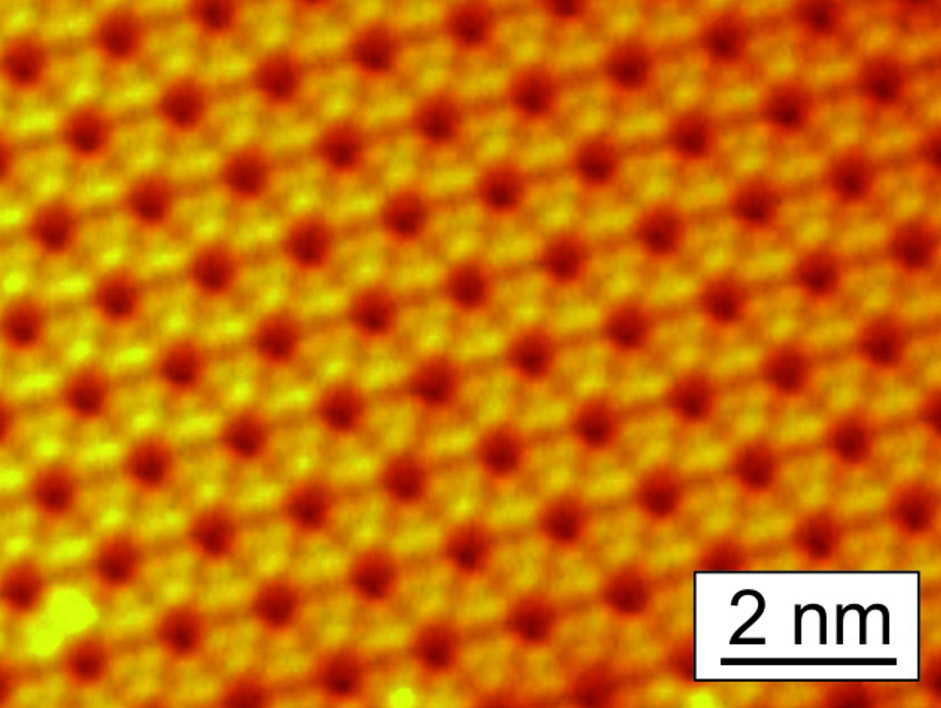 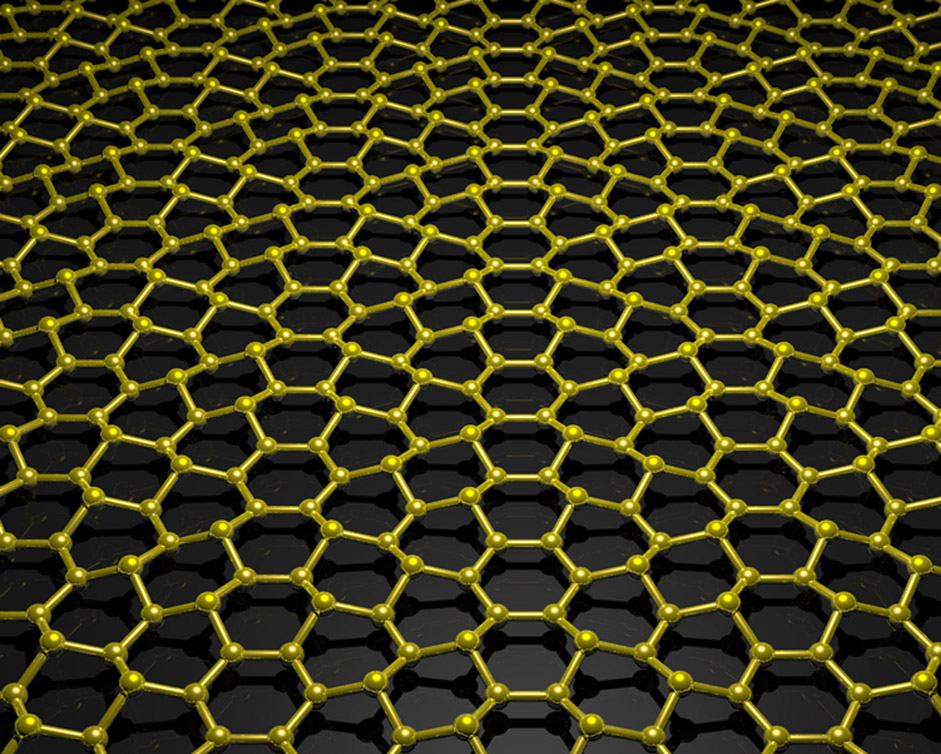 Figure 2. Ball-and-stick model of the 3×3phase of monolayer silicene on a silver (111) substrate.

For monolayer germanene a telltale honeycomb pattern, which forms large domains, all displaying

reconstruction in coincidence with rotated

gold (111) supercells has been obtained among a few other phases, where R means that for this phase the pattern is rotated by the indicated number of degrees from the pure freestanding silicon case.5

Remarkably, just very recently, Tao and coworkers devised and used an ingenious process to fabricate a single-layer silicene field effect transistor (FET).6 They managed to prevent degradation of monolayer silicene on removal from its parent silver substrate and on exposure to air. The FET operates at room temperature and has ambipolar behavior with mobilities for both electrons and holes of about 100cm2 V−1 s−1.6 We expect the same fabrication method could be used to fabricate germanene FETs in the near future.7 The derived mobilities, if seemingly rather modest with respect to expectations for standalone silicene, still compare favorably with those of, typically, single-layer molybdenum disulfide. Even if degradation occurs presently within a few minutes of exposure in air, there are nonetheless plenty of possibilities to prevent it, for example, by encapsulation or by using multilayer silicene, which possesses a unique 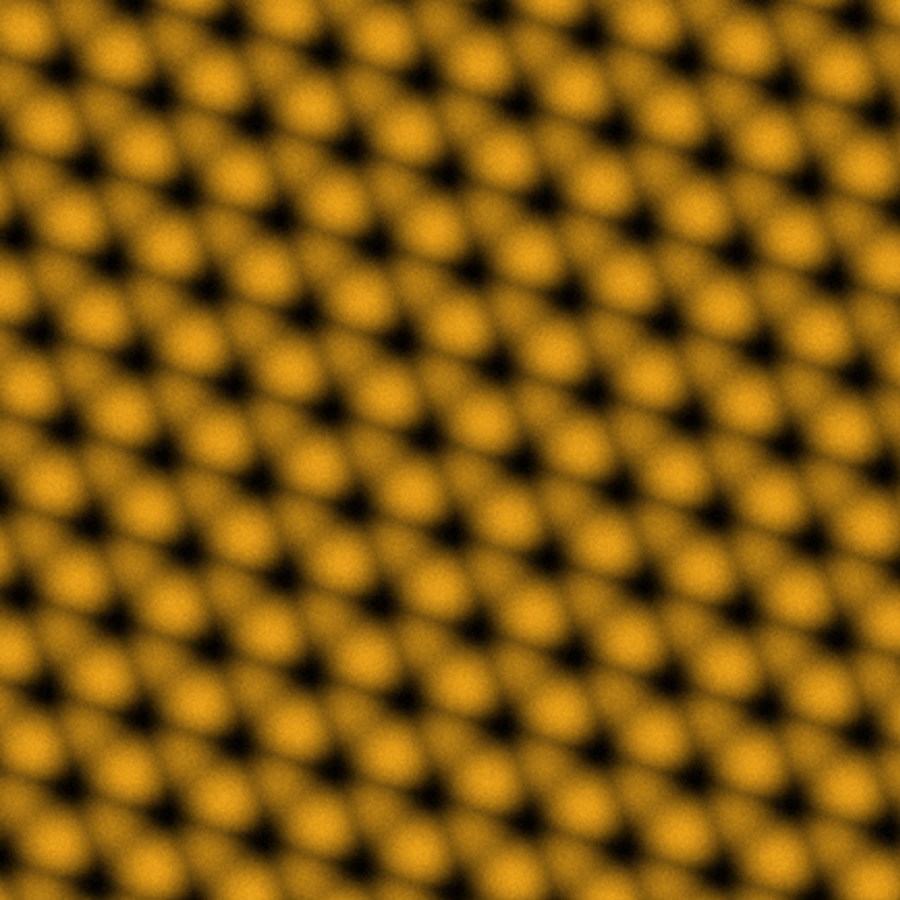 In the case of multilayer silicene it has been shown that high carrier mobilities can be achieved. Indeed, measurements performed using synchrotron radiation angle-resolved photoelectron spectroscopy of the valence states in connection with scanning tunneling spectroscopy observations demonstrate that

multilayer silicene hosts massless Dirac fermions with a very high Fermi velocity ∼0.3×106ms−1 (about one third that of freestanding graphene).8,9 We have further proved that multilayer silicene is self-protected in ambient air by an ultra-thin native oxide, which preserves the integrity of the silicene sheets underneath.10 Although not yet demonstrated, we expect similar growth and behavior for multilayer germanene.

In summary, silicene or its cousin germanene are well-placed to replace silicon, which is ubiquitous in the electronics industry.7 Our next steps will be to examine the growth and behavior of multilayer germanene and explore further the properties of functionalized or encapsulated single- and multilayer silicene and germanene.