Detecting and identifying chemicals is critical for addressing security threats such as explosives. Those handling explosives tend to contaminate surfaces they touch with trace particles. Traditional trace detection technologies require surfaces to be swabbed and the swab placed into an instrument for analysis. For many reasons, non-contact methods are preferred, but these need to be safe to use around people, sensitive to small amounts of threat material, and sufficiently selective to distinguish chemicals of interest from the broad variety of surface types (vehicles, clothing, luggage, packages) in typical security scenarios.

Many approaches to non-contact or ‘standoff’ detection of explosives have been explored. Most explosives evaporate slowly and, consequently, insufficient vapor is left in the air for ‘sniffing’ technologies. Previously deployed ‘puffer’ technologies (designed to blow particles off surfaces and collect them) were abandoned because they collected too much interfering dust. More recent non-contact approaches have been based on optical spectroscopies (such as laser-induced breakdown or Raman), but those typically use visible or UV lasers, which are not safe for our eyes. To overcome these issues, we have developed a novel method using IR spectroscopy.1–4

IR spectroscopy is based on the well-known absorption properties intrinsic to the specific chemical bonds within a molecule. IR spectrometers are ubiquitous in analytical chemistry laboratories and are a benchmark for chemical identification based on each material's unique spectral ‘fingerprint.’ In our method, we shine specific IR wavelengths on the surface of interest while observing the target using an IR camera as a thermal imager. Where the light is absorbed, the surface will warm slightly (by ∼1°C), which is observed in the IR image.5 This thermal emission signal also contains spectroscopic signatures of the material emitting it, which we exploit using a series of IR filters before the camera.6 By comparing images captured as a function of incident wavelength, we generate a spectral response function for each area on the target, which we match to the known absorption signatures of explosives to detect and identify them. We refer to this approach as photo-thermal IR imaging spectroscopy (PT-IRIS). A schematic diagram is shown in Figure 1.

Figure 1. Schematic of photo-thermal IR imaging spectroscopy (PT-IRIS). A tunable IR quantum cascade laser is tuned to wavelengths (λ) characteristic of absorption bands in analytes of interest, such as explosives, and directed toward a target surface. The target surface is imaged using an IR camera to measure the local heating due to absorption by potential chemical threats.

Two component technologies have enabled the development of PT-IRIS. The first is quantum cascade lasers as compact, bright, tunable sources of IR light for target illumination. The second is IR focal plane arrays used for thermal imaging. We have integrated these components into a system, mounted on a portable cart, for testing the PT-IRIS technology on targets of interest. Figure 2 shows the PT-IRIS cart during outdoor testing. We used PT-IRIS in our laboratory to measure a series of sample ‘coupons’ featuring four substrate types (glass, painted metal, stainless steel, and polyethylene, a typical plastic). These were loaded with ∼100μg/cm2 of the explosives trinitrotoluene (TNT), cyclotrimethylenetrinitramine (known as RDX), ammonium nitrate (NH4NO3, an explosive precursor), or sugar (sucrose, a confusant or an explosive fuel). We illuminated each coupon with a series of individual wavelengths and collected IR images through each of four IR filters for each wavelength. 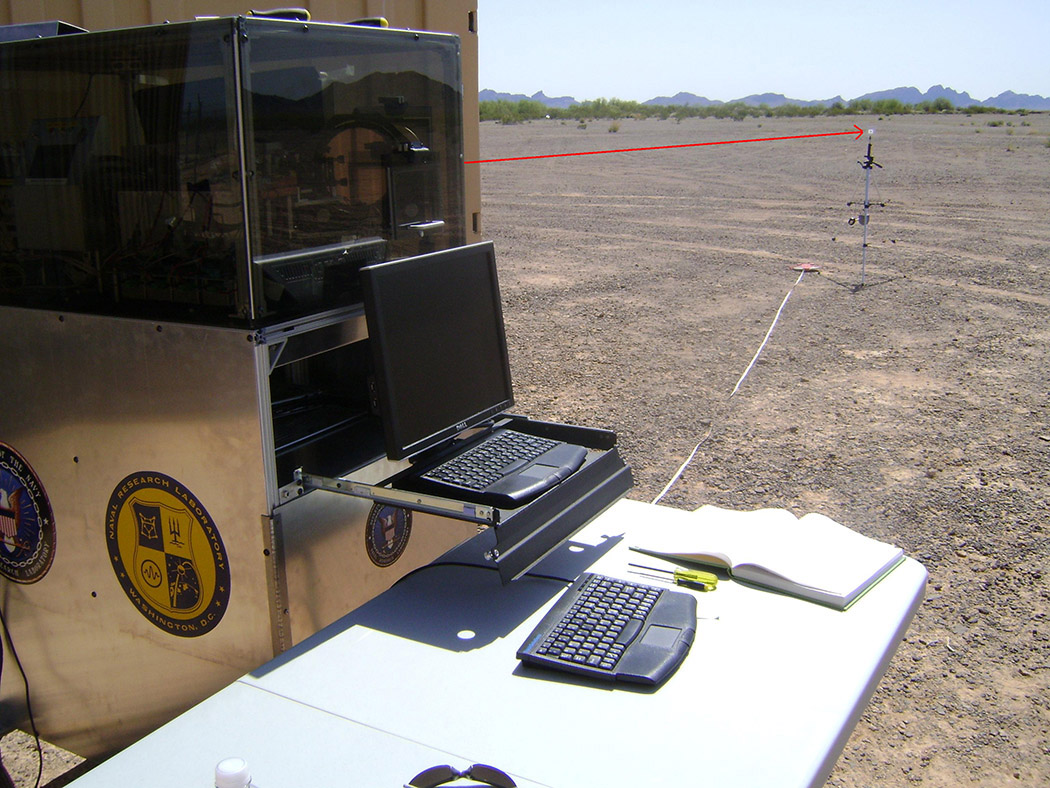 Figure 2. The Naval Research Laboratory PT-IRIS cart system during outdoor testing. The red arrow has been added to show the approximate path of the IR beam.

We analyzed this data set using a pattern classification method known as boosting,7 which compares the response of each sample to every permutation of incident laser wavelength and collection filter (the ‘features’). To improve the statistical power, we separated each sample coupon into the 197 individual pixels (inside a circle 17 pixels in diameter) in the illuminated area of the IR image. Roughly half of the pixels from each coupon were randomly assigned for training the classifier (an algorithm used to separate the data into classes), whereas the remainder were reserved for testing the classifier. We then scored each of the ‘testing’ pixels on the basis of how well it matched a particular classifier. Computing these scores for all of the testing pixels showed that, without exception, the analytes were detected on every loaded substrate. The results of tests on white painted metal are shown in Figure 3. Similar results were obtained for the steel, glass, and plastic substrates. The false alarm rate (a positive score on a nominally clean substrate) was very low. The identification of each specific chemical was generally correct, although TNT and RDX were occasionally cross-identified due to their spectroscopic similarity. A full discussion of the analysis with pixel-by-pixel scoring results has been published.7 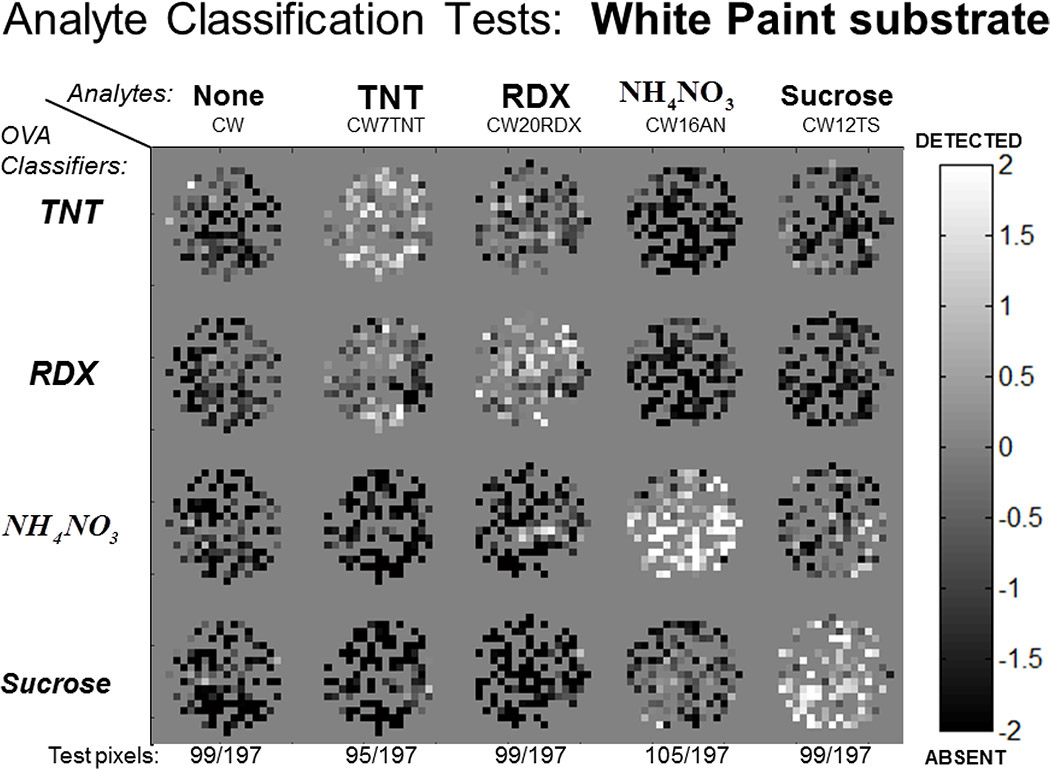 Figure 3. Results of the analyte classification tests on white painted car panels: Trace levels of the explosives trinitrotoluene (TNT), cyclotrimethylenetrinitramine (known as RDX), ammonium nitrate (NH4NO3, an explosive precursor), and sucrose (a confusant or an explosive fuel) on white painted steel panels were examined using PT-IRIS in a circular area composed of 197 pixels. Half of the pixels (same gray as background) were used for training and the other half for testing. Light-shaded pixels indicate detection, whereas dark pixels indicate the absence of that particular analyte. As expected, the TNT classifier (top row) detected TNT (indicated by white pixels) predominantly on the sample where TNT was present (second column). Similar results were found for the RDX, NH4NO3, and sucrose classifiers (rows 2, 3, and 4, respectively). Not surprisingly, some cross-identification occurred between TNT and RDX owing to their similar IR spectra.7

These results indicate that PT-IRIS is able to detect and identify trace explosives on relevant substrates, even on a pixel-by-pixel basis. If these results can be expanded to a full complement of the analytes of interest and a broad range of potential target substrates, this would represent a significant step toward the goal of standoff detection of trace explosives.

In summary, we have developed PT-IRIS for standoff detection of trace explosives. This technology is based on eye-safe invisible IR light and offers the potential to identify chemical threats on arbitrary target surfaces. We have built a mobile system and demonstrated detection and identification of TNT, RDX, NH4NO3, and sucrose on relevant substrates of glass, painted metal, stainless steel, and plastic. In the future, we plan to test the system on more analytes and substrate types, as well as potential confusants and interferents. Tests will be carried out over standoff ranges of 1–30m in a variety of environmental conditions. We are also continuing to investigate different classifier algorithms to improve sensitivity while minimizing potential false alarms. In the long term, we hope to transition the PT-IRIS technology to an industrial partner for defense, security, and commercial applications.

Christopher Kendziora is a research physicist and optical spectroscopist with over 20 years of experience in the fields of IR and Raman spectroscopies. He specializes in the direction of IR quantum cascade lasers for stand-off detection of trace explosives. He has presented several invited talks at previous SPIE Defense, Security and Sensing (DSS) symposia and has published several articles in the proceedings. He has also served as a session chair at the SPIE DSS meeting.

R. Andrew McGill is a research chemist and section head. His research focuses on intermolecular forces, light interactions with materials, and materials for high-strength applications. He specializes in the detection of explosives and other hazardous chemicals and in the development of high-strength materials for ballistic applications. He has given several oral presentations at the SPIE DSS meeting and has published several papers in the conference proceedings.

Robert Furstenberg is a research physicist. His research focuses on IR characterization of materials and instrumentation development. He specializes in standoff detection of explosives. He has given several oral presentations at the SPIE DSS meeting and has published several papers in the conference proceedings.

Michael Papantonakis is a research physicist. His research interests include the explosive detection by non-contact methods and the development of nanocomposites with improved strength properties. He has given several oral presentations at the SPIE DSS meeting and has published several papers in the conference proceedings.

Jeff Byers is a research physicist. His research interests include condensed matter, biophysics, nanotechnology, and space sciences. He specializes in algorithms for data analysis. He has published several papers in the SPIE DSS conference proceedings.