An optical method for early detection of Alzheimer's disease

Alzheimer's Disease (AD) is currently diagnosed using neuropsychological tests. These differentiate between mild cognitive impairment (MCI), AD, and other dementia types. However, the pathogenic process of AD begins several years before the clinical onset of the disease, and it induces measurable changes in the brain, cerebrospinal fluid (CSF), and the blood. There is a worldwide effort to develop treatments to prevent, cure, or delay the progression of AD. If we had a diagnostic tool for early detection of the disease based on its pathological expressions, we could significantly advance the development of such treatments, and increase their effectiveness.

A promising approach for early detection of AD is based on measuring the concentration ratio of amyloid-beta and tau proteins in the CSF. Several studies using this approach showed that it is possible to predict the development of MCI to AD several years before clinical diagnosis of the disease.1, 2 However, to measure concentrations of CSF biomarkers, it is necessary to collect CSF from patients during a lumbar puncture procedure. This involves many risks and complications and may not be suitable as an annual test. To overcome these drawbacks, we proposed3 an optical method that replaces the lumbar puncture process and enables estimation of the CSF biomarkers concentration ratio.

Our proposed method, described in Figure 1, has several stages. First, we inject fluorescent probes4–7 that bind specifically to the CSF biomarkers into the blood. We then insert a miniature needle with an optical fiber into the lumbar area. It passes several tissue layers until it reaches the epidural fat, without penetrating the dura mater (a membrane around the brain). Laser radiation reaches the CSF through the optical fiber in the needle and excites the fluorescent biomarkers. We measure the resultant emission and use the ratio of fluorescence intensities to estimate the biomarkers' concentration ratio and the risk of developing AD. The method does not require a priori information about the tissue's optical properties. 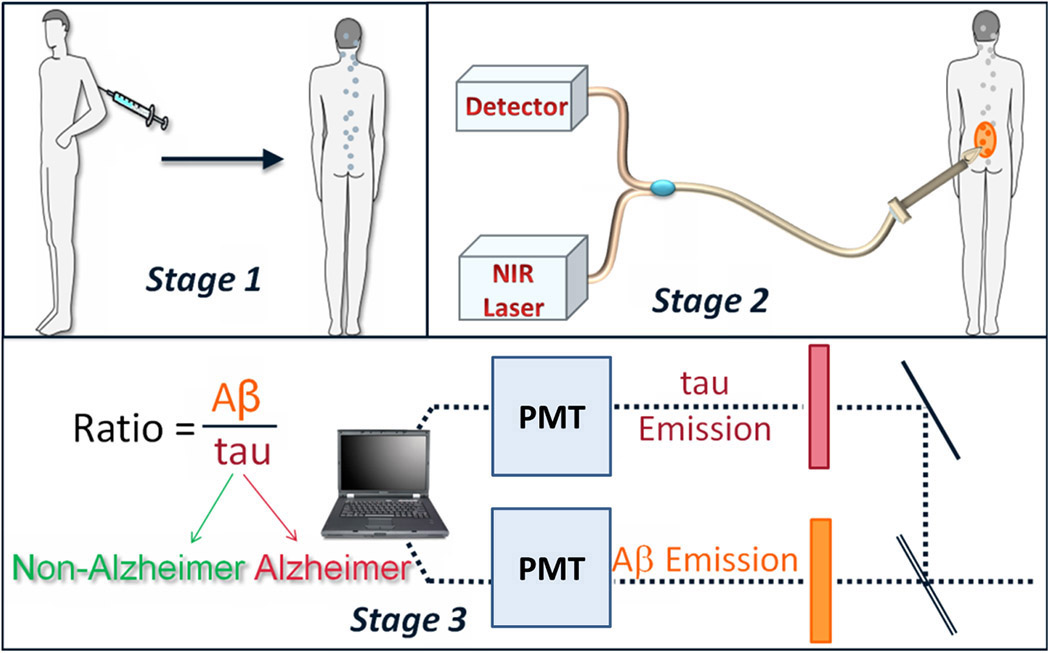 Figure 1. The proposed setup. Stage 1: Injection of two fluorescent probes. Stage 2 : Measuring the fluorescence intensity of the two probes using a needle near the cerebrospinal fluid. Stage 3: Calculating the concentration ratio of amyloid-beta (Aβ) and tau proteins based on the fluorescence intensity ratio and estimating the risk of developing Alzheimer's Disease. NIR: Near-IR. PMT: Photomultiplier (detector).

To ensure the feasibility of our technique, we developed a theoretical model of photon propagation in the lumbar area to simulate the relationship between the measured fluorescence emission and the biomarkers' concentration ratio. We then used Monte-Carlo simulations to show that sufficient energy reaches the detector. We tested the accuracy of the method experimentally in vitro using multi-layered tissue phantoms. We prepared these with different scattering and absorption coefficients, thicknesses, and fluorescence concentrations to simulate variations in human anatomy and AD stages, as well as the needle location. We further tested the method's accuracy ex vivo using chicken breast tissue.

For in vitro experiments, we performed a total of 120 measurements on three-layered phantoms simulating the bone, CSF, and epidural fat layers. The bone layer was made of delrin (a synthetic polymer), and the epidural fat layer was made of polyester resin with titanium dioxide. We modeled the CSF using a cuvette with fluorescent samples. We measured 15 fluorescent samples, varied in their concentration ratio, with eight different polyester slabs varying in thickness and scattering coefficient. Figure 2 presents the estimated versus true concentration ratio. Each data point is the average estimated value of eight measurements, using the different polyester slabs, with its 90% confidence interval. The mean absolute error of the 15 estimated values presented in Figure 2 is 4.4% with a standard deviation of 2.5%. 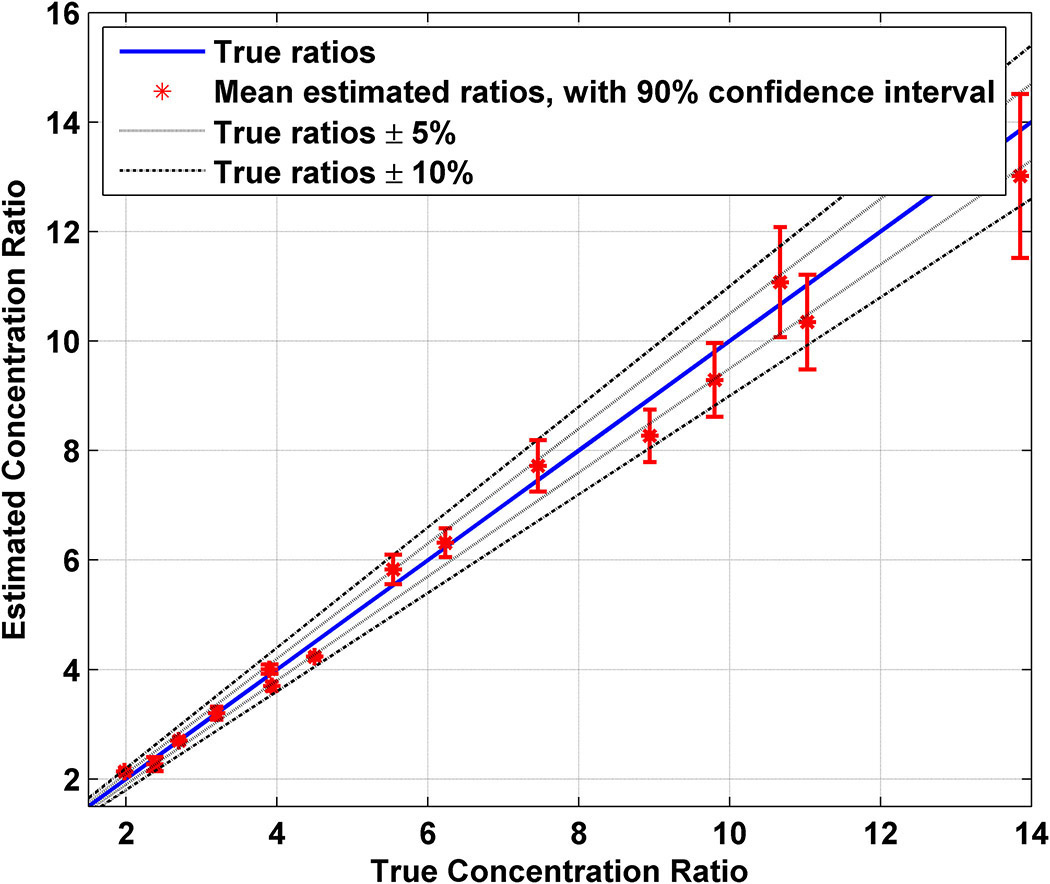 To better simulate the variations in the human spectra, we tested the method using four sets of ex vivo samples of chicken tissue. Figure 3 presents the estimated versus true concentration ratio. Each data point is the average estimated value of four measurements (performed on different excitation locations on the non-uniform tissue slab) with its 90% confidence interval. The mean absolute error of the estimated values presented in Figure 3 is 10.9% with a standard deviation of 7.8%. 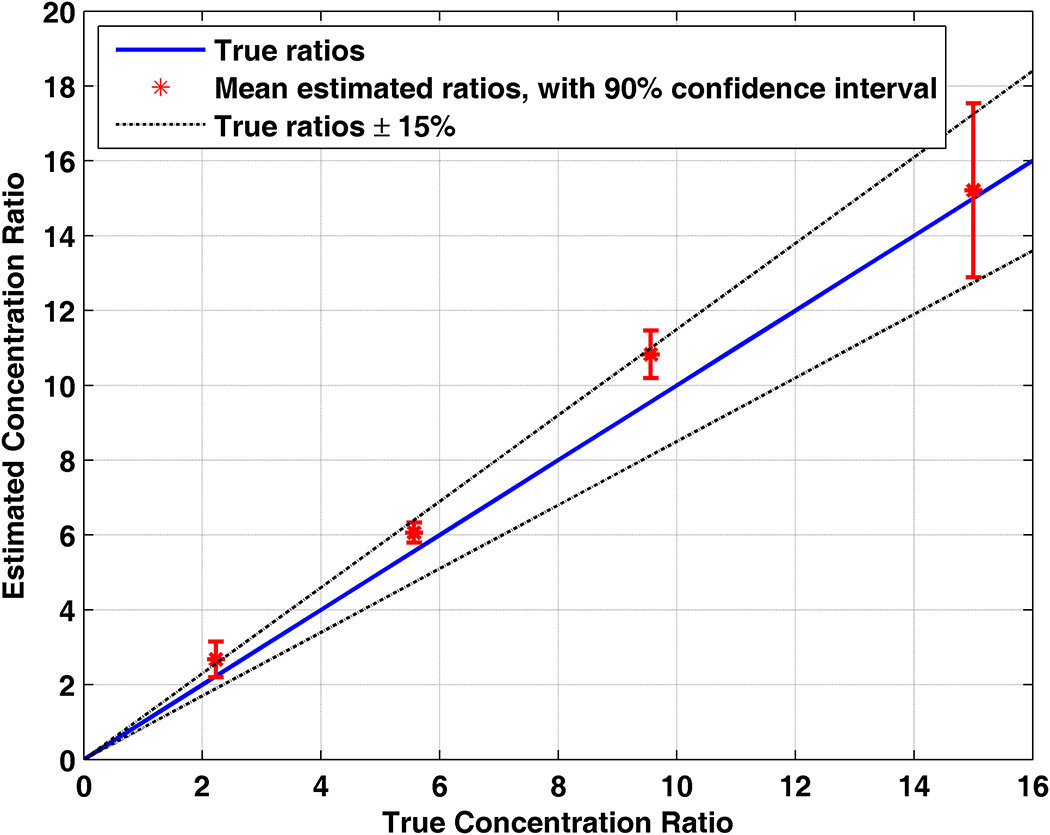 We tested our method for optical detection of AD using fluorescent probes in the CSF with Monte Carlo simulations in in-vitro and ex-vivo experiments. These validated the possibility of accurately estimating the ratio of amyloid-beta and tau proteins in the CSF. The method does not require any a priori knowledge regarding the tissue's anatomical and optical properties and is performed without the need to penetrate the dura mater and collect CSF samples. Our next step is to demonstrate the method's accuracy in vivo and to verify its suitability as an annual screening test that will assist in the early diagnosis of AD.

Israel Gannot is a professor of biophotonics at Tel Aviv University and at Johns Hopkins University. His field of research is multi-modal diagnostic and treatment methods based on nanoparticles, early detection of diseases based on fluorescence imaging, lasers tissue interactions, and optical fibers and sensing for medical applications.