The fabrication of functional crystals is an important task in photonics. Dielectric photonic crystals represent one well-established example of such materials, capable of inducing a photonic bandgap and thereby forbidding light propagation over a specific range of frequencies.1 Researchers have recently introduced the concept of metamaterials, in which light propagation properties can be tuned by the creation of periodicities that are much smaller than those in dielectric photonic crystals.2

Traditionally, top-down lithographic techniques have been largely responsible for gaining control over these artificial photonic architectures. Limitations in feature size and precision may, however, potentially limit the realization of additional advanced material properties.

Researchers have explored the use of bottom-up assemblies for nanomaterials to circumvent this issue. Such methods enable the development of deep-subwavelength-scale features, allowing for a level of control over nanostructure spacing and symmetry that was not previously accessible with top-down lithographic techniques.3, 4

In the last few years, the development of DNA nanoparticle assembly has enabled unprecedented control over the formation of 3D nanoparticle crystals. This technique takes advantage of the programmability of DNA base pairing, where the placement and number of adenine, cytosine, guanine, and thymine nucleobases in DNA sequences can be specified. This base pairing subsequently induces the assembly of nanoparticle superlattices with precise and independent control over the lattice constant,5 crystal symmetry,4 and nanoparticle composition6 (e.g., metal nanoparticles and quantum dots): see Figure 1(a–c). A very recent advance in this field has led to the development of geometrically well-defined DNA-mediated single crystalline

nanoparticle superlattices:7 see Figure 1(d). Bottom-up approaches such as these are expected to enable the assembly of interesting crystal architectures that may find use in a variety of photonics research fields, including metamaterials, quantum optics, and biosensing.

It has recently been suggested that strong coupling between surface plasmons and photonic modes in photonic crystals consisting of metal nanoparticles can prohibit light propagation. This coupling also opens a photonic bandgap if the lattice constant of the crystal is in the deep-subwavelength size regime.8 Crystals that exhibit such bandgaps are called polaritonic photonic crystals (PPCs). These systems do, however, require the positioning of plasmonic nanoparticles in the crystal to be controlled on the nano- or deep-subwavelength scale. Due to this fabrication challenge, 3D PPCs have remained largely unexplored in the visible wavelength range.

We have successfully used DNA-mediated assembly to fabricate PPCs,9 producing the first device application based on this assembly technique. The PPCs are synthesized from two colloidal batches of gold nanoparticles, each functionalized with alkyl-thiolated oligonucleotide sequences containing an 18-base-pair binding region. These sequences are hybridized to complementary linker sequences, which themselves have a shorter 6- or 7-base-pair complementarity to DNA labeled on the other particle. When the two particle batches are mixed, nanoparticle aggregates form, and subsequent thermal annealing of the aggregates induces the assembly of the particles into rhombic dodecahedra single crystals with body-centered-cubic (BCC) particle arrangements:7, 9 see Figure 2(a). To demonstrate the tunability of the light–plasmon coupling, we developed three PPCs (denoted PPC1, PPC2, and PPC3) with different lattice constants and diameters (27.2 and 5.6nm, 32.2 and 9.0nm, and 44.0 and 20.0nm, respectively), resulting in substantially different gold volume fractions (PPC1 ∼ 0.91, PPC2 ∼ 2.3, and PPC3 ∼ 9.8%). 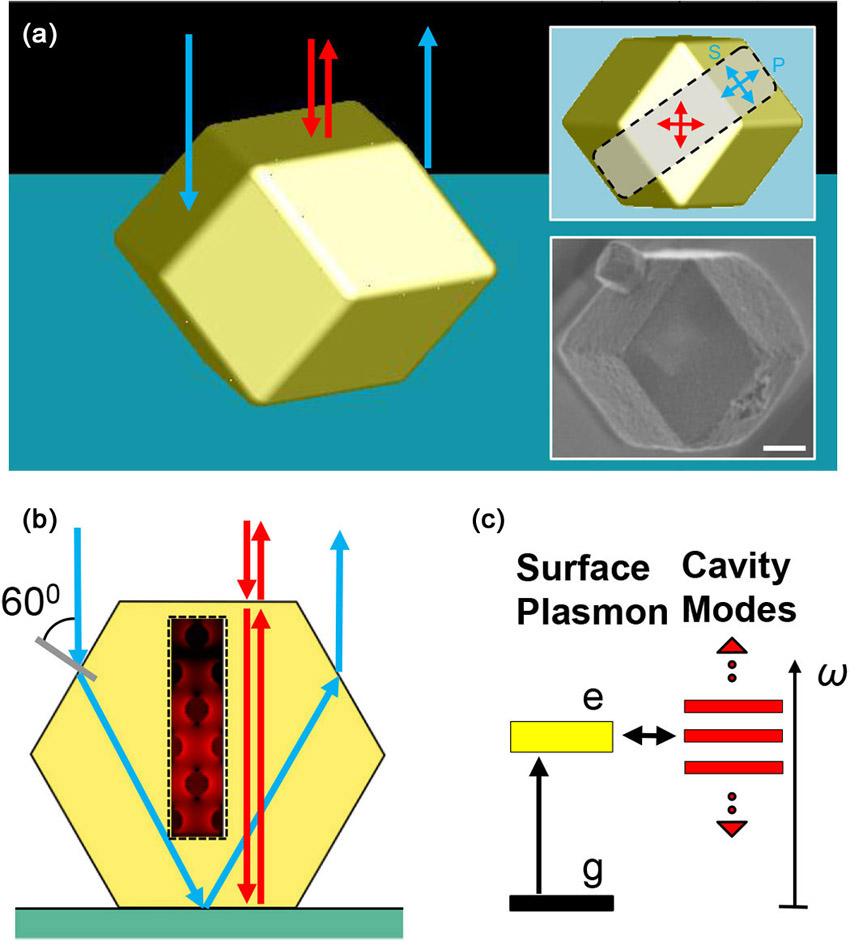 Figure 2. (a) 3D illustration of a plasmonic polaritonic photonic crystal (PPC) assembled from DNA-modified gold nanoparticles. Red arrows indicate light rays normal to the underlying substrate (Fabry–Perot cavity modes, FPMs). The blue arrows represent light rays entering through the slanted side facets. The top right inset shows the top view of the crystal. The bottom right inset shows a scanning electron microscope (SEM) image of a representative PPC with a scale bar of 1μm. S: s-polarization. P: p-polarization. (b) A 2D scheme showing the geometric optics approximation of backscattering, consistent with the explanation in (a). The hexagonal outline is a vertical cross section through the gray area in the top right inset of (a), parallel to its long edge. The box enclosed by a dashed line depicts the interaction between localized surface plasmons and photonic modes with a typical near-field profile around gold nanoparticles. (c) Scheme of plasmon polariton formation. The localized surface plasmons (yellow bar) strongly couple to the photonic modes (red bars, FPMs). e: Excited state. g: Ground state. ω: Angular frequency.

Figure 3. (a–c) (i) SEM image and (ii) optical bright field reflection mode image of PPC1, PPC2, and PPC3, respectively. PPC1 is on a silicon substrate. PPC2 and PPC3 are on indium-tin-oxide-coated glass slides. The optical images show bright spots at the center due to backscattering from the top and bottom facets. Scale bars are 1μm.

Due to the light interference induced by two parallel facets in the microcavity geometry, the PPCs exhibit Fabry–Perot cavity modes (FPMs): see Figure 2(a) and (b). These FPMs can be detected via backscattering spectra, which allow the optical response of the PPCs to be investigated. Importantly, light is expected to strongly couple to the gold nanoparticle surface plasmons within the PPCs—see Figure 2(b) and (c)—forming a polariton bandgap around the surface plasmon frequency.

We probed the FPMs using optical experiments and theoretical calculations. The backscattering spectra from the PPC center spots (shown in Figure 3) show Fabry–Perot interference patterns in the visible region: see Figure 4. Significantly, the Fabry–Perot oscillations are suppressed only around the surface plasmon resonance energy (∼530nm, ∼2.3eV) for PPC1 and PPC2, indicating that light propagation is suppressed due to strong surface plasmon coupling. This behavior provides evidence for polariton bandgap formation that is consistent with theoretical predictions.8 These experimental results are in remarkably good agreement with two infinite slab models, one based on BCC crystal geometry and the other an effective medium theory (EMT) approximation based on the gold volume fraction. Due to strong absorption caused by the gold interband transition at relatively higher gold volume fractions, FPMs are not observed below 500nm for PPC3: see Figure 4(c). The tunability of light–plasmon coupling is evident in the different backscattering intensities and polariton bandgap widths around the surface plasmon frequency in PPC1–3. 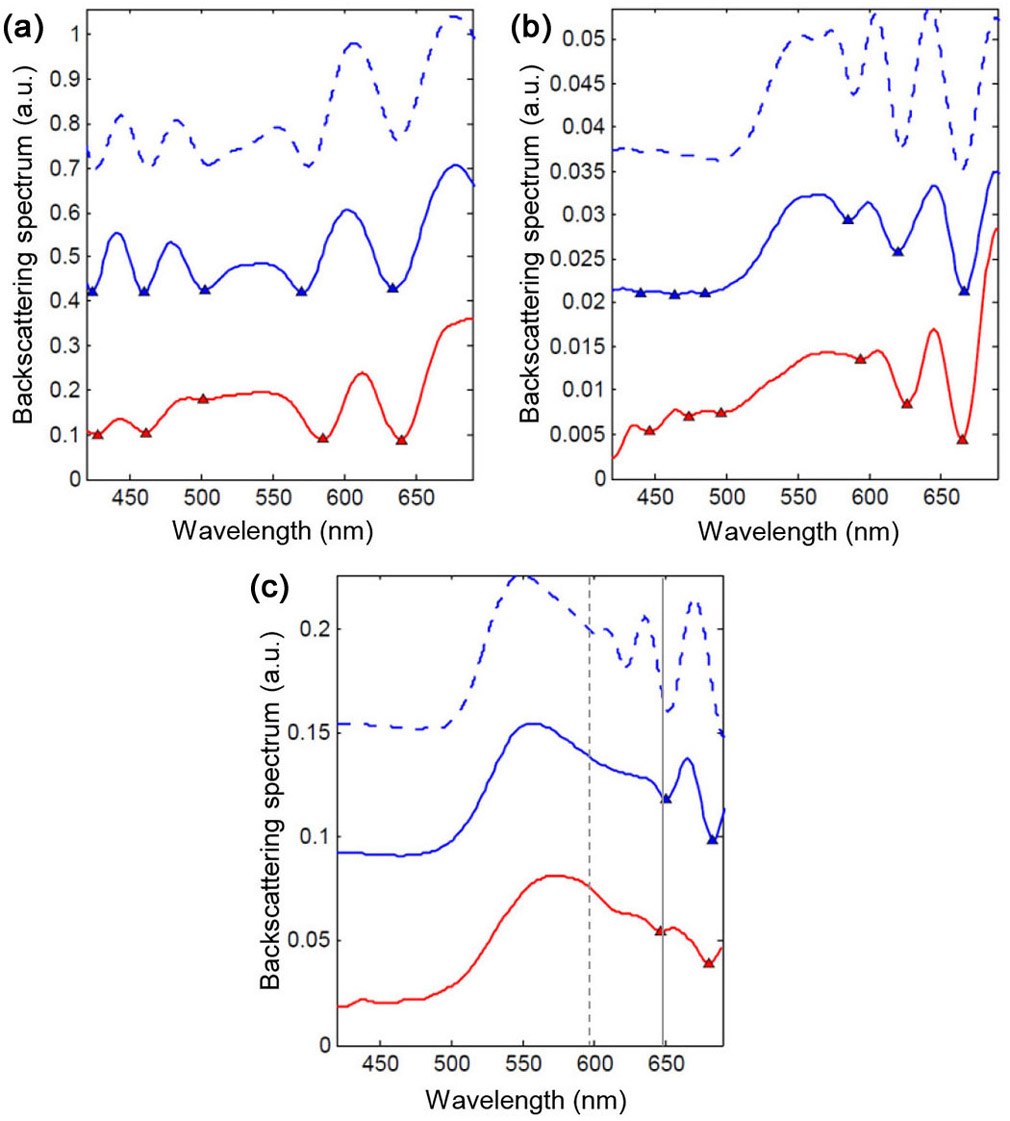 In summary, we have shown that DNA-programmable colloidal crystallization can be used to generate a library of plasmonic PPCs. Independent tuning of the lattice constant and nanoparticle diameter in high-quality 3D single crystals is unprecedented in studies of light–matter interaction based on metal–nanoparticle crystals. We believe our synthetic approach will become a powerful vehicle in photonics, from the perspective of both fundamental science and potential device applications. For example, we anticipate that this research will open the door to studying exciton–photon coupling in novel PPC plasmonic cavities for cavity quantum electrodynamics. Additionally, the exploitation of the rhombic dodecahedral shape leads to microcavity-driven whispering-gallery modes and microlensing properties, which can be used for photonic studies. We are currently studying the exciton–plasmon interaction and microlensing capabilities of our systems.

Daniel J. Park received his BSc from Korea University, where he also fulfilled MSc coursework in physics. Currently a joint PhD candidate in the Mirkin and Schatz labs, he is working on photonic applications for the DNA nanoparticle superlattice system.

George C. Schatz is Morrison Professor of Chemistry and Professor of Chemical and Biological Engineering at Northwestern University. He has published three books and more than 800 journal articles in theoretical and computational chemistry. He is an SPIE Member and longtime member of the program committee for the conference on Plasmonics: Metallic Nanostructures and Their Optical Properties at SPIE Optics + Photonics.

Chad A. Mirkin is the director of the International Institute for Nanotechnology and the George B. Rathmann Professor of Chemistry at Northwestern University, where he is also a professor of medicine and a professor of materials science and engineering. He is the author of over 562 manuscripts and over 930 patents worldwide, 246 of which have been issued.

Jessie C. Ku received her BSc in applied physics in 2011 from Caltech. She is currently a PhD candidate in the Department of Materials Science and Engineering at Northwestern University, where she is studying the structure–property relationships of the DNA nanoparticle superlattice system in the Mirkin lab.