Non-invasive wearable sensors are desirable for a wide range of medical measurements, and especially for ubiquitous monitoring of a patient's health. They have applications in the treatment of neurological disorders, depression, drug addiction, and even for rehabilitation. Our work in organic optoelectronic devices suggests a new class of wearable sensors for medicine and sports.

Organic semiconductor devices have the attractive properties of tuneable light emission, simple fabrication on flexible substrates with scope for miniaturization, and the ability to generate and detect light.1 We have shown that organic light-emitting diodes (OLEDs) and organic photodiodes (OPDs) can be combined to make compact, non-invasive, flexible sensors for medical applications by simple solution-processing methods. Specifically, we developed a potentially low-cost muscle contraction sensor that can measure signals from intact muscles to control the movement of active prosthetic devices such as artificial limbs.2 Moreover, we demonstrated the feasibility of this all-organic, optoelectronic sensor by controlling a robotic arm so that it mimicked the motion of a healthy volunteer's arm for two types of muscle contractions.

Our contraction sensor works by measuring light backscattered by skeletal muscle tissue.3 Specifically, our device measures the difference between the light travelling parallel and perpendicular to the muscles. Inside the device, four organic photodiodes surround an organic LED light source. When the muscle contracts, the light scattering alters and the sensor detects the change. Fabricating the sensor is simple: we used semiconducting polymers, which are flexible and can be deposited from solution. Figure 1 shows a photograph of the actual sensor, comprising a flexible light source in the middle, with four photodiodes on a pliable base. 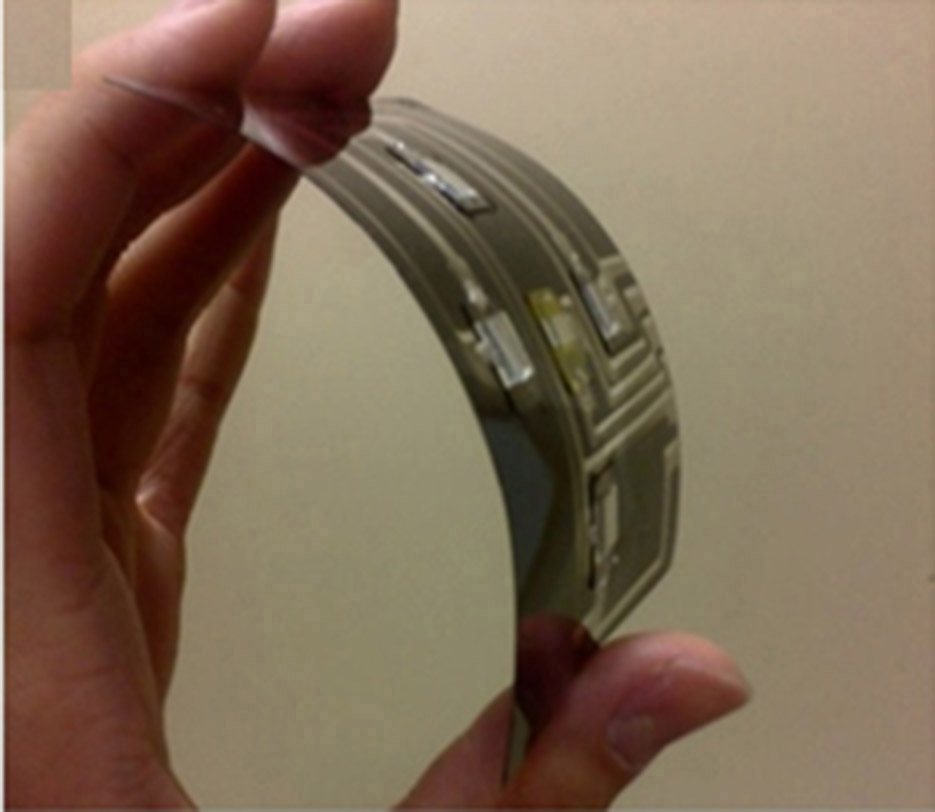 The flexibility of our device enables the user to wear it as a bandage, in close contact with the body. Figure 2 shows a schematic of the sensor mounted on an arm. We used a red light source because such light travels further in the tissue than shorter wavelengths. The separation between light source and each photodetector was 2cm, so that the backscattered light we collected was from the deep muscle tissue. 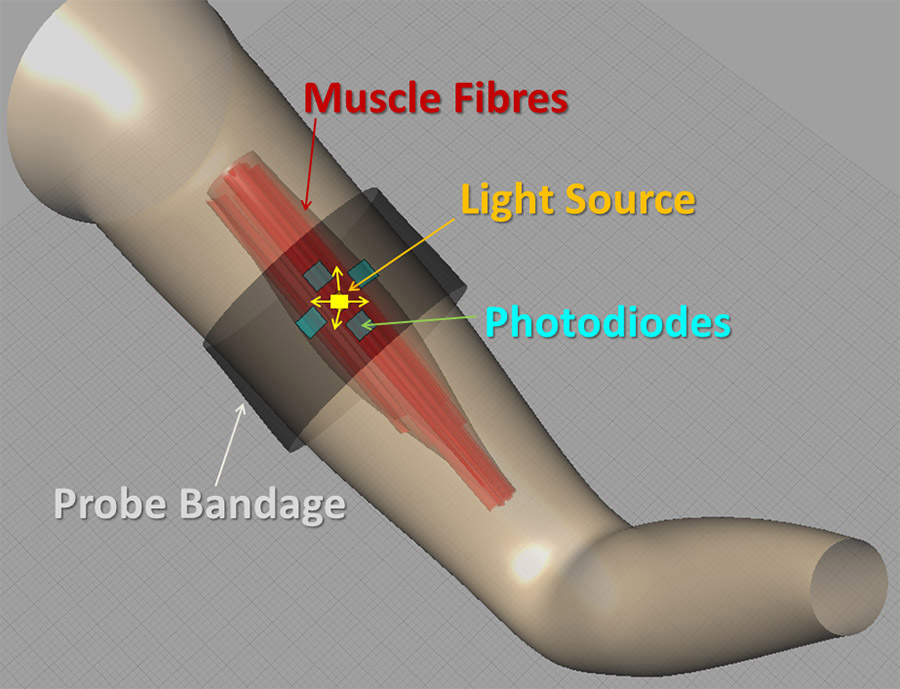 Figure 2. Schematic principle of muscle contraction sensor showing an arm containing muscle fibers, and the probe bandage consisting of a source and four photodiodes on top of the arm.

We tested the sensor on a 25 year-old volunteer, who placed it over his biceps muscle and secured it with a cloth bandage. We explored two types of muscle contraction to test the device's feasibility. The first is isotonic contraction, in which the muscle shortens and the force exerted is approximately constant, like lifting a dumbbell. The other type is isometric contraction, in which the muscle length remains constant, like pushing against a wall. Remarkably, our sensor can distinguish between these two types of contractions: isometric give a positive signal , whilst isotonic give a negative signal, as shown in Figure 3. Hence, the sign of the signal indicates the type of contraction. By contrast, electromyography (EMG)—which is widely used to record muscle activity—does not distinguish between such contractions. Therefore, we lose part of the information potentially present in the contraction that could be used for prosthesis actuation. Furthermore, with EMG it is necessary to have a sustained period of direct contact between the electrode and the muscle, and the patient is trained to contract their muscles in given patterns to actuate the prosthesis. This is challenging, as the electrical contact is unstable, and, therefore, the contraction needs to be sustained for long periods. Our sensor overcomes these problems and avoids the needle electrodes required to make electrical contact in EMG. 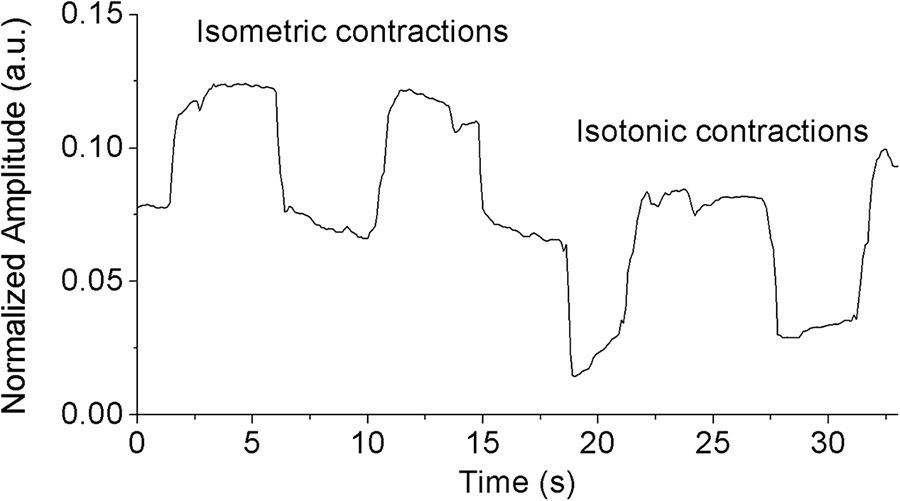 We demonstrated our sensor by controlling a robotic arm based on the signal measured from a volunteer, who wore the sensor on her biceps (see Figure 4). The signal from the sensor controlled the robot arm, which imitated the volunteer's isotonic (lifting arm) and isometric (twisting arm) muscle contractions. We successfully tested the sensor on both the biceps and the deltoid muscles,1 and show the results of our work in a short video.4 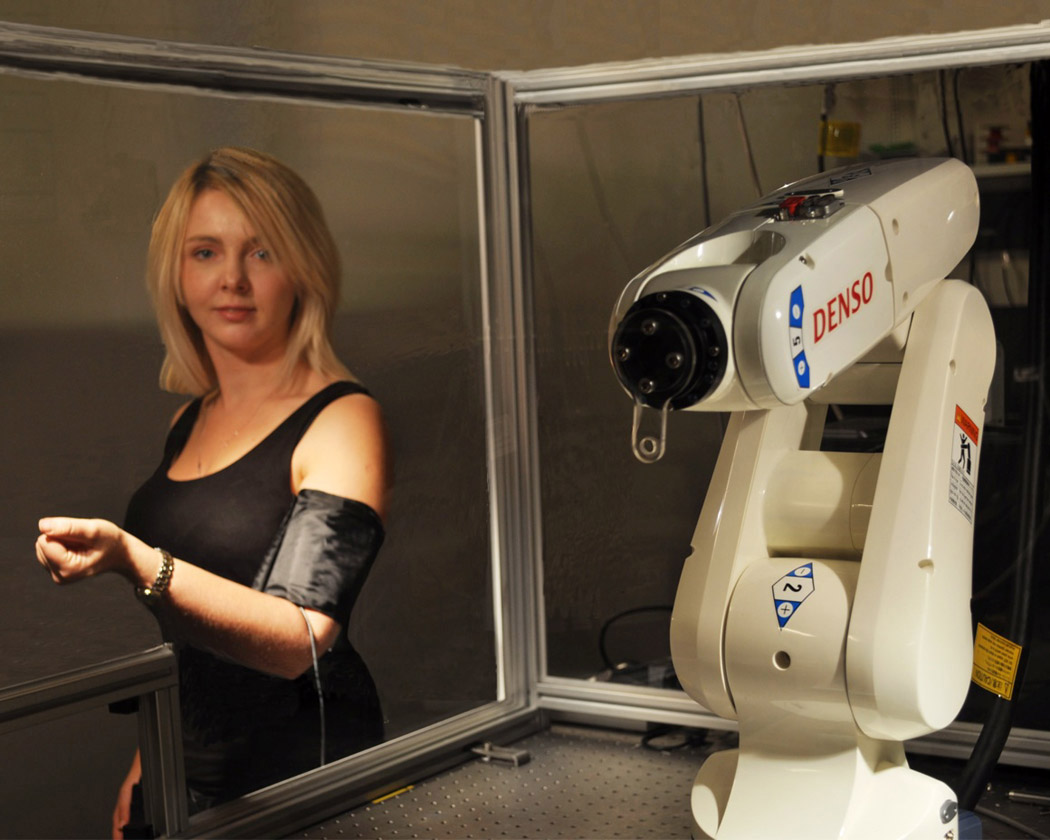 Figure 4. The robotic arm mimics the movement of the volunteer.

In conclusion, our results show that this discovery could launch a new era of low-cost, disposable, wearable optical sensors. Our future work will focus on how we might apply our approach to relieve patients from risks associated with electrical sensors, including electromagnetic interference, pain caused by sensing needles, and immune responses to electrodes.

Ifor Samuel has been professor of Physics and director of the Organic Semiconductor Centre since 2000. He is a Fellow of the Royal Society of Edinburgh, the Institute of Physics, Royal Society of Chemistry, and SPIE. He leads a research group exploring the physics of organic semiconductor materials and devices.

Ashu Kumar Bansal received a PhD in physics from the University of Regensburg, Germany, in laser spectroscopy. He is currently a research fellow, and his main research interests are in organic bioelectronics, wearable sensors, and paper microfluidics.

Shuoben Hou received his MSc in photonics from Ghent University and VUB, Belgium, and the University of St Andrews, jointly in 2013. Currently, he is a PhD student at KTH Royal Institute of Technology, Sweden, working towards silicon carbide imaging sensors for high-temperature applications.

Olena Kulyk obtained a BSc with distinction in electronics and a MSc in physical and biomedical electronics from the National Technical University of Ukraine in Kiev. Currently, she is a PhD student, and her research interests include optical modeling of light-tissue interaction and its application in photodynamic treatment and in wearable sensors. She has been a SPIE author and an active committee member of the SPIE St Andrews Student Chapter since 2012.