The investigation of charge carrier dynamics represents one of the primary requirements for the development of high-speed electronic devices. This is particularly pertinent in regards to 1D materials such as semiconducting nanowires (NWs) and carbon nanotubes (NTs).1–3 The transit time of these materials (the time required for charge carriers to transverse the conduction channel) is the ultimate factor limiting the high-frequency response of nanoscale devices. The resistor-capacitor (RC) time constant (determined by the circuit design and material properties) presents another bottleneck that restricts traditional radio-frequency measurements. Due to the impedance mismatch problem inherent in the investigation of high-frequency response, delicate measurement methods are required.

Ultrafast optical measurement techniques enable the investigation of charge carrier dynamics with a time resolution determined by the optical pulse width (down to a few femtoseconds): see Figure 1. A femtosecond pump pulse focused onto an NW device causes the generation of an ultrashort carrier pulse, which is subsequently transported through the NW by diffusion and/or drift processes. The transportation of these carriers can be monitored using a spatially separated probe pulse. We monitored the photocurrent generated by a probe pulse (Ipr) as a function of the time-delay (tdelay) between the pump and probe pulses using femtosecond scanning photocurrent microscopy (fs-SPCM).4 This enables the dynamic movements of pump-induced carriers to be captured. 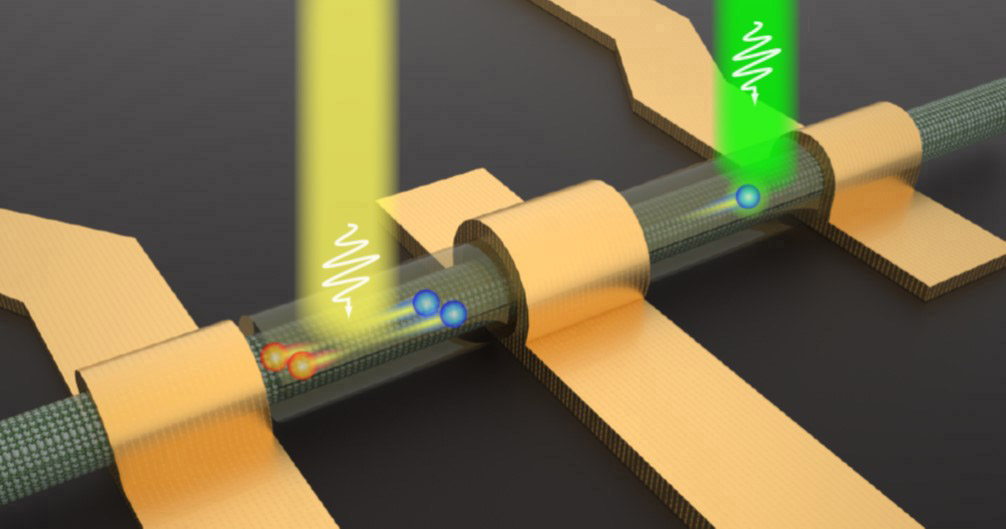 Figure 1. Illustration of ultrafast carrier dynamics in a nanowire (NW) device. Photo-induced ultrafast carriers are generated by a femtosecond pump laser and transported through the NWs by drift and subsequent diffusion processes. A spatially and temporally separated probe pulse monitors the pump-induced excess charges.

Figure 2(a) shows a representative spatio-temporal image of the carrier transport in a silicon NW (SiNW) device. The ultrafast photo-induced carriers generated near one of the metal electrodes (i.e., at the Schottky contact) and the subsequent migration toward the opposite electrode (D) can be monitored by measuring Ipr as a function of probe position along the NW axis for a fixed pump position, as tdelay is varied (0–600ps). The magnitude of Ipr decreases significantly near the zero delay, indicating that the change in Ipr results primarily from the presence of the pump pulse. When the probe pulse is positioned at the pump position (S), the change in Ipr (ΔIpr) peaks at the zero delay and decays with a time constant of 140ps: see Figure 2(b).

Figure 2. (a) Spatio-temporal image of the photocurrent generated by the probe pulse (Ipr), measured in a silicon nanowire (SiNW) device with a pump pulse fixed at the Schottky contact (S). The x-axis represents the probe position along the nanowire (NW). (b) Time trace of the change in Ipr(Δ Ipr) when the probe is positioned at S (when the probe spatially overlaps the pump pulse). ΔIpr is defined as |Ipr − Ipr, off|, where Ipr, off| is the probe photocurrent without the pump pulse. (c) Time trace of ΔIpr when the probe is positioned at the opposite electrode (position D). The maximum change in signal Ipr at position D is delayed by the transit time (tpeak). pp: Pump pulse. pr: Probe pulse.

More importantly, when the probe pulse is positioned at D, the maximum ΔIpr is delayed: see Figure 2(c). This delay is caused by migrated carriers that are injected from position S and subsequently transported to the opposite electrode. ΔIpr increases rapidly until it reaches its maximum value at ∼65ps for a traveling distance of 3.5μm. This transit time corresponds to a carrier velocity of 5.4×106cm/s. We were able to measure the carrier transit times (1–100ps) for SiNW and carbon nanotube devices with different channel lengths, ranging from 1μm to 8μm. We found the carrier velocity for nanotube devices to be an order of magnitude larger than that of SiNWs. We believe that our approach will find application in a variety of semiconducting devices, including commercialized systems such as high-electron-mobility transistors.

Addressing dynamic carrier movements in terms of various working conditions—see Figure 3(a)—specifically those that strongly modify the electronic band structures of NWs, is crucial for wide applicability: see Figure 3(b).5,6 The gate-dependent dynamic behavior of the photo-generated carriers is shown in Figure 3(c). Carrier transport to the opposite electrode is delayed significantly as the gate bias (VG) is increased from −50V to 10V. This increased transit time reflects a significant reduction to the NW band-bending strength (i.e., the suppressed drift motions). The carrier transport is ultimately dominated by a hole diffusion process for VG>0. Corresponding to the maximum ΔIpr, the most probable hole velocity is plotted as a function of VG in Figure 3(d). The velocity decreases as the field strength is reduced, producing a result that is in accordance with the change in the gate potential shown in Figure 3(b).

The influence of external bias voltages over carrier velocity is expected, but we found that these voltages are also capable of manipulating the shape of ultrashort carrier pulses. Control over the source-drain bias enables ultrashort electrical pulses to be tuned, which is crucial for improving the speed of devices.4 This method should therefore prove useful for the development of novel methods to maintain and control the temporal width of electrical pulses. 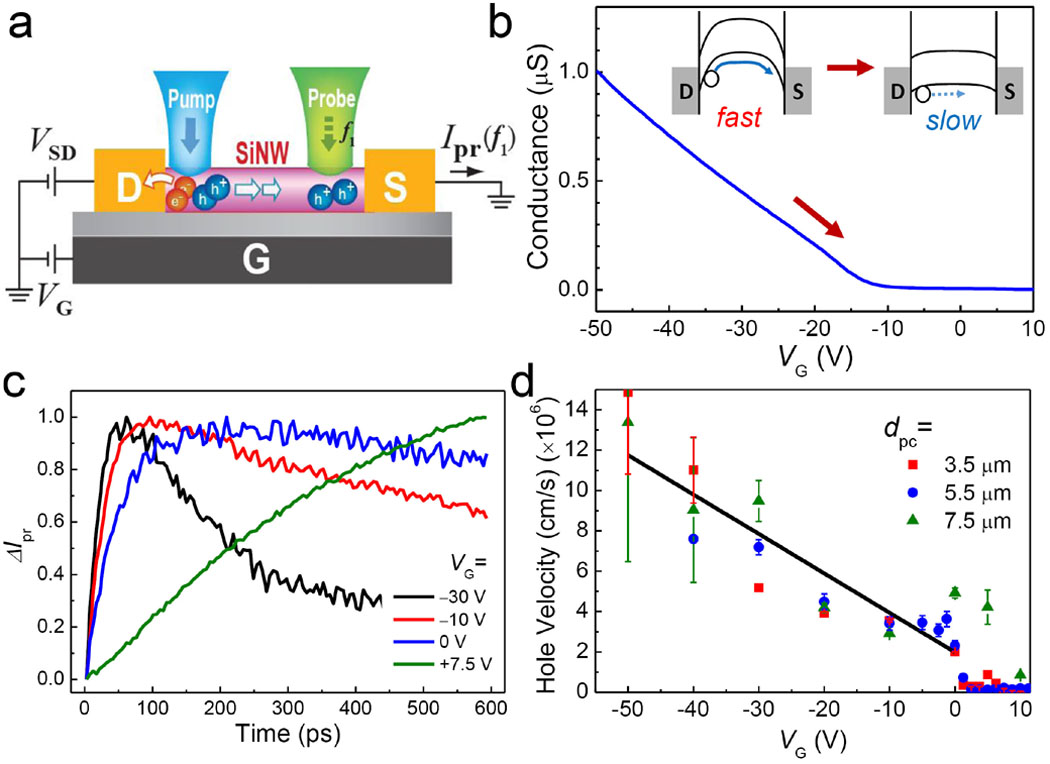 In summary, fs-SPCM enables the measurement of charge carrier transit time within electronic devices. This technique may enable the design of novel devices for the creation of tailorable ultrafast pulses. Our research represents an important step toward understanding ultrafast dynamics in various nanoscale devices and developing future high-speed electronics. In future work, we intend to focus on the tailoring of electrical pulses, working towards the generation and observation of the shortest ever electrical pulse.

This work was supported by the Midcareer Researcher Program (2014R1A2A1A11052108) through a National Research Foundation grant funded by the Korean Government.

Yeong Hwan Ahn is a professor in the Department of Physics and the Department of Energy Systems Research. His current research focuses on femtosecond science, terahertz spectroscopy, nanoscale device fabrication, and optoelectronic characterization.