Exponential projections for Internet traffic growth place enormous demands on transmission rates for underlying information infrastructures at all levels (i.e., ranging from core to access networks).1–3 In response to these traffic demands, the 100Gb/s Ethernet (100GbE) standard was recently adopted. In addition, the 400GbE and 1Tb/s Ethernet (1TbE) are also currently being studied. Despite these efforts, it is now evident that future optical transport networks will be affected by the limited bandwidth of information infrastructures, high power consumption, heterogeneity of network segments, and security issues.

A multicarrier (subcarrier) channel design (also known as a supercarrier channel concept) has been proposed as a way to increase bit rate per channel beyond 100Gb/s. In this design, the channel subcarriers are considered as a single entity that is routed together. The coherent optical (CO) orthogonal frequency-division multiplexing (OFDM)4 and Nyquist-based wavelength-division multiplexing (WDM)5 technologies have been introduced as the building blocks for superchannels. Both CO-OFDM and Nyquist WDM are based on a concept where signal overlapping—either in the spectral or time domain—is allowed as long as the orthogonality between subcarriers is preserved. This concept has been proven in laboratory and field experiments. The superchannel design is a strong stimulus for a flexible grid channel spacing concept, which has evolved from the International Telecommunication Union's Telecommunication Standardization Sector fixed-wavelength grid. Space-division multiplexing in spatial-division multiplexing (SDM) fibers—i.e., few-mode fibers (FMF), few-core fibers (FCF), and few-mode-few-core fibers—represents an additional way to increase optical transmission capacity. A number of experiments have shown the viability of this approach. In some cases, FCF and FMF can be combined, and there can be more than 20 spatial modes.1 SDM fibers allow orbital angular momentum (OAM) modes to be generated. These OAM modes are a special category of spatial modes that have azimuthal angular dependence. There has been an apparent historical shift toward the multidimensional characterization of optical transmission, i.e., where there are a number of parameters that can be arranged in different ways to increase capacity and improve resilience to impairments. The multidimensional character has also been used as a foundation for the exploration of more advanced networking concepts.

We have recently proposed a new multidimensional signaling approach as a solution for increasing optical transmission rates.1, 6,7 In that methodology, all available degrees of freedom were used to convey information over spatial domain multiplexing schemes. In the electrical domain we used discrete time-basis functions, whereas in the optical domain, we used both polarization states and spatial modes. Here we present a different strategy, in which we use non-binary pm (‘multinary’) signaling (where p is a prime number greater than 2, and m is an integer ≥ 1) instead of conventional binary and 2m signaling. By using pm signaling, we can improve the spectral efficiency of conventional 2m schemes by at least log2p times for the same bandwidth occupancy. In addition, the energy efficiency of pm signaling schemes is much better than 2m signaling schemes that are based on binary representations of data. Our energy-efficient coded modulation method for pm signaling—in combination with energy-efficient signal constellation design, spectral-multiplexing, polarization-division multiplexing, and orthogonal division multiplexing—represents multi-Pb/s serial optical transport without the need for the introduction of SDM. We are able to achieve serial optical transmission with the use of SDM beyond 10Pb/s.

Our multinary signaling-based coded modulation scheme, which can be described in the context of polarization division multiplexing (PDM), is shown in Figure 1. The aggregate data rate of our scheme—when used in the PDM context—is given by RD=2RsRlog2(pm), where Rs is the symbol rate and R is the code rate. In 125-ary signaling, for an information symbol rate of 25 Giga symbols/s, the aggregate data rate we can achieve with our scheme is therefore 348.285Gb/s. When we use this scheme in tandem with three orthogonal subcarriers, an aggregate data rate of 1044.855Gb/s can be achieved. Our scheme can thus be used to enable serial optical transport beyond 1Tb/s for moderate optical signal-to-noise ratios (OSNRs). For the same bandwidth occupancy, the spectral efficiency of our multinary scheme is log2p times higher than for a corresponding scheme based on binary signaling. Our multinary scheme can also be used to improve energy efficiency, compared with cases where binary signaling-based optical transmission is used. 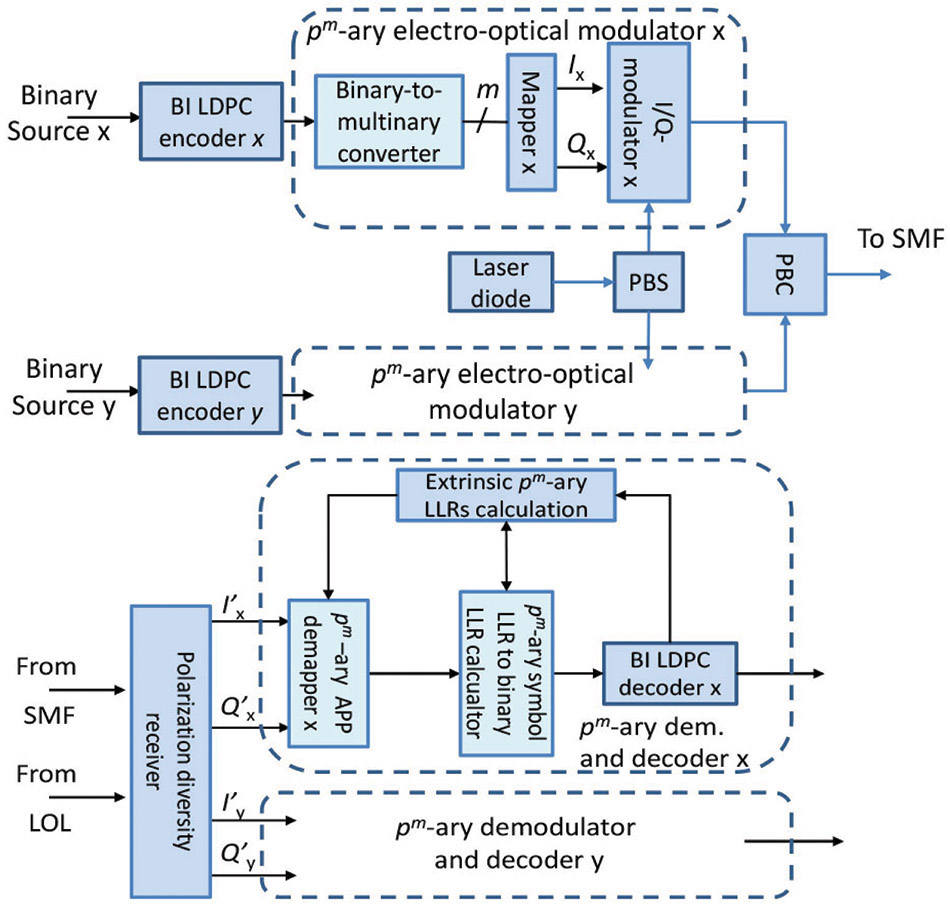 Figure 1. Multinary signaling-based coded modulation scheme. In the transmitter (top), after binary (BI) low-density parity-check (LDPC) encoding, binary-to-multinary (p-ary) conversion takes place. A mapper then takes m (integer ≥1) p-ary symbols at a given time, and selects a point from the pm-ary signal constellation. After up-sampling and driving amplification, these coordinates are used as inputs for an in-phase/quadrature (I/Q) modulator (x or y). The two independent (x- and y-polarization state) pm-ary streams are then combined by a polarization beam combiner (PBC) and transmitted through a single-mode fiber (SMF) to an optical transmission system. For the receiver (bottom), conventional diversity coherent detection provides the corresponding projections along the x-polarization (I ′ xand Q ′ x) and y-polarization (I ′ yand Q ′ y) directions. Estimates for the I- and Q-coordinates pass through the pm-ary a posteriori probability (APP) demapper for calculation of pm-ary symbol log-likelihood ratio (LLR) numbers. PBS: Polarization beam splitter. LOL: Local oscillator laser.

We can also use our scheme to enable serial optical transport at rates greater than 10Pb/s. For these cases, we organize the signal frame into 10 band groups, with center frequencies that are orthogonal to each other. Each spectral component carries 1TbE, and each spectral band group carries 10TbE traffic. We use a four-step hierarchical architecture, with 1Tb/s superchannel signal building blocks. We then arrange 1TbE spectral slots in spectral band groups to enable up to 10TbE. By combining two (or four) spectral band groups, we can achieve 20TbE (or 40Tbe) with this scheme. The second layer is related to spectral division multiplexing, which results in a 100Tb/s aggregate data rate, per orthogonal division multiplexer input (i.e., corresponding to 100TbE). By using our orthogonal division multiplexer7 to combine two, four, or 10 of these signals, our scheme can be compatible with 200Tb/s, 400Tb/s, or 1Pb/s rates. Serial optical transmission of 1Pb/s over single-mode fibers is therefore possible with our proposed multinary signaling-based coded modulation.

This work was partly supported by National Science Foundation grants CCF-0952711 and EEC-0812072.

Ivan Djordjevic is a tenured associate professor with joint appointments in the College of Engineering and the College of Optical Sciences. He is an author or co-author of four books, more than 370 journal and conference publications, and 28 US patents.