In this new era of ‘Big Data,’ the ‘Internet of Things,’ and ubiquitous connection, tremendous amounts of digital information are generated and transmitted by numerous sensors, smartphones, and network devices. This brings about new insights, trends, and business opportunities, but the capacity of optical networks has to be increased significantly to cope with the huge amount of data. One way to do this is by increasing the spectral efficiency (SE) of optical transmission systems, such as by optical orthogonal frequency division multiplexing (OFDM).1 However, in OFDM, the channel bandwidth has to be more than the baud rate (the symbol rate or modulation rate in symbols per second or pulses per second) to prevent intersymbol interference. Given this orthogonality condition, the only way to further improve the SE is by employing higher-order modulation formats at the cost of lower noise and nonlinearity tolerance.

Recently, the possibility of further improving the SE by compressing the OFDM subcarrier spacing (and thus breaking the ‘orthogonal’ rule) was demonstrated in wireless and optical communications.2, 3 This spectrally efficient frequency division multiplexing (SEFDM) technique reduces the optical bandwidth required by allowing optical subcarriers with closer frequency spacing, while maintaining the baud rate per subcarrier and the system performance. Figure 1 compares the bandwidth for traditional single-carrier and multiple-carrier signals, including an OFDM signal and an SEFDM signal. For a given bandwidth, the SEFDM system can transmit more data. 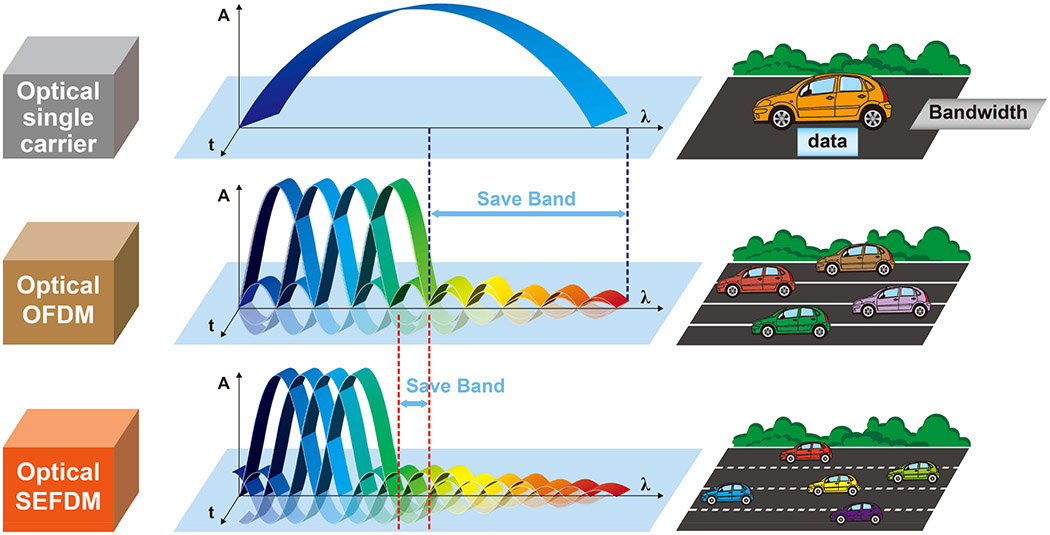 Information theory sheds light on the maximum allowed information transmitted at a given signal-to-noise ratio, the so-called Shannon limit. Any further improvement of SE would correspondingly degrade the bit-error-ratio (BER) in this region. However, traditional quadrature amplitude modulation (QAM), which represents the data signal by changing the amplitude of two carrier signals in quadrature (i.e., 90° out of phase), optimizes each dimension independently, and thus suffers a 1.53dB penalty.4 A constellation diagram may be used to represent a signal modulated by a modulation scheme such as QAM or phase shift keying. It displays the signal as a 2D scatter diagram in the complex plane (see Figure 2 for 4-QAM and 8-QAM constellation diagrams, showing how they transmit two and three bits per symbol, respectively). This penalty can be mitigated either by ‘constellation shaping,’ or by nonorthogonal packing of more symbols in given degrees of freedoms, such as by SEFDM. Traditional OFDM packs subcarriers orthogonally by letting T≥1/Δf, where Δf is the subcarrier spacing and T is the symbol duration. By contrast, in SEFDM, the subcarriers are placed closer so that T<1/ΔfSEFDM. Alternatively, SEFDM can also be understood as each transmitted symbol with duration T being truncated from the original one to duration T<1/ΔfSEFDM. 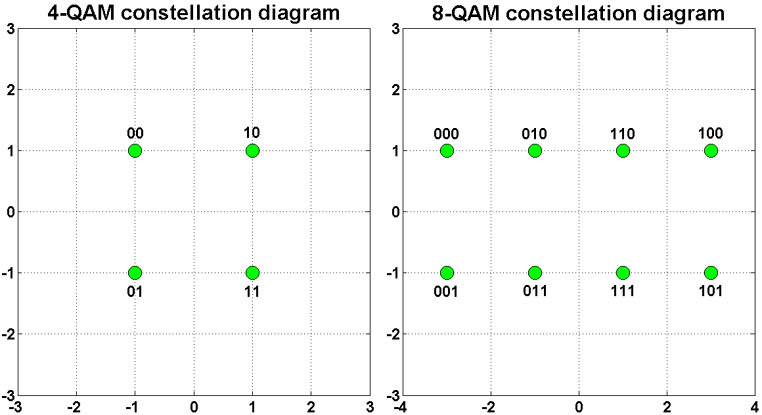 SEFDM can be seen as OFDM plus an encoder that maps the ensemble {X} of transmitted symbols in a block from N1-dimensional space to {Z} (the equivalent transmitted symbols in a corresponding OFDM system) in N2-dimensional space. Since the components of X form a discrete set, the mapping from {X} to {Z} is still largely one-to-one, provided that the compression factor α=N2/N1 is not too small. When α gradually decreases, the one-to-one condition may no longer hold, and the the optical signal-to-noise ratio (SNR) penalty becomes a limiting factor. Nonetheless, when α is above 0.8,5 the minimum Euclidian distance of the constellation of {Z} remains almost the same as that of {X}. In a sense, it means that compared with X, whose constellation is independent in each degree of freedom, Z is optimized in N2-dimensional space through such mapping criteria. Consequently, SEFDM can transmit more information than OFDM without introducing a significant SNR penalty in this regime.

However, the bandwidth-saving merit comes at the cost of higher decoding complexity. Traditionally, SEFDM is decoded with a highly complex maximum likelihood (ML) algorithm. Sphere decoding is an alternative with comparable performance but greatly reduced complexity. Recently, we experimentally demonstrated a direct-detection optical SEFDM 4-QAM system transmitting through an 80km single-mode fiber.3The experimental results have demonstrated that SEFDM can achieve 25% bandwidth saving and have the same performance as OFDM.4

Figure 3 shows simulation results for the performance of OFDM 4-QAM, OFDM 8-QAM, and SEFDM 4-QAM with different compression factors. As the compression factor α decreases from 1 to 0.8, the BER curve suffers only a very small penalty compared with the uncompressed OFDM 4-QAM system, which means that for the same BER, constellation optimization reduces the required bandwidth. For α>0.8, any further improvement of SE would correspondingly degrade the BER in this region, which implies that the benefit of multi-dimensional constellation optimization has been almost fully exploited. With α=0.67, we achieve an SE of 3, the same as with an 8-QAM system, yet the required OSNR around BER = 10−3 is more than 2dB away. 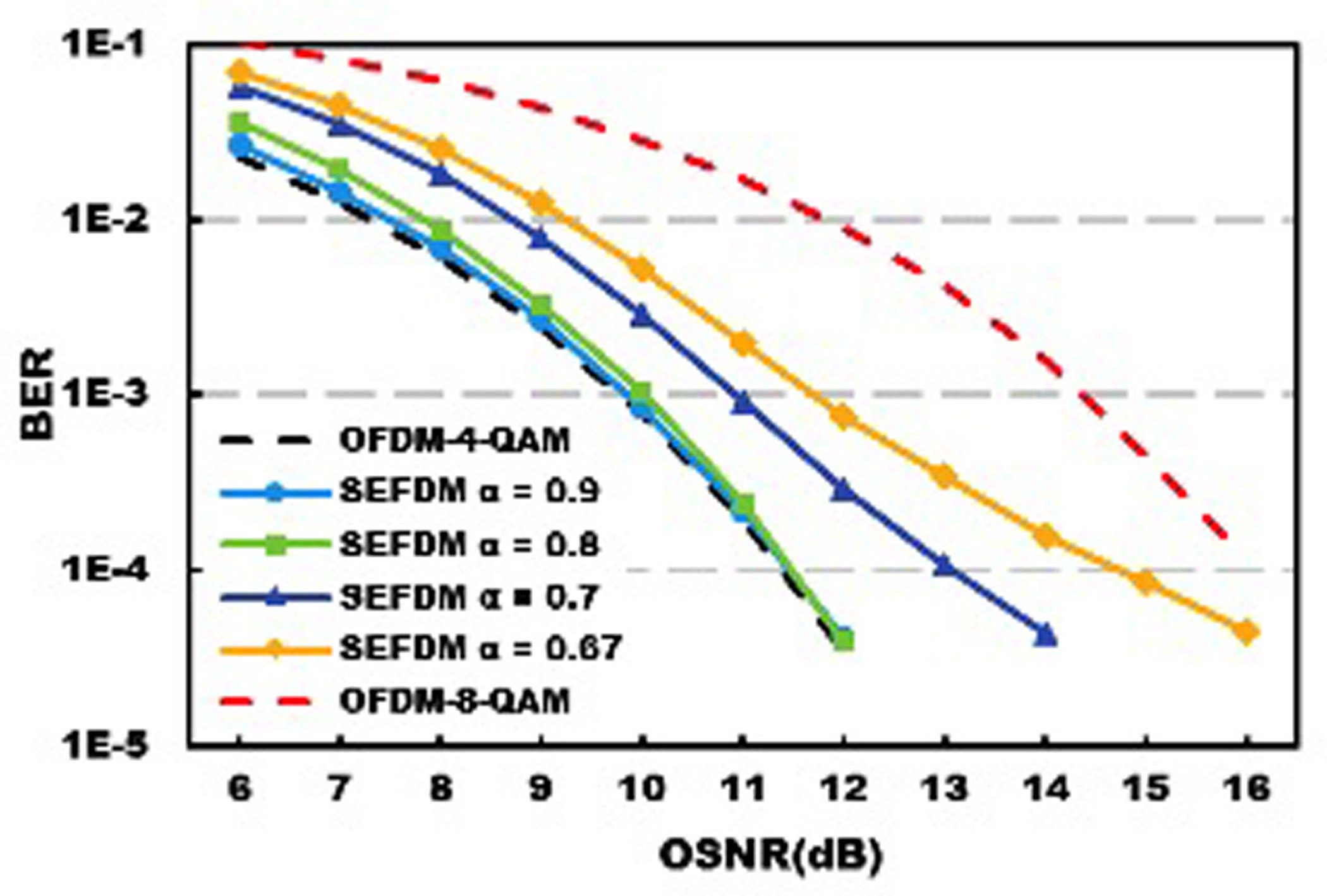 In summary, our experimental results and theoretical analyses have demonstrated that the SEFDM system can achieve a certain degree of bandwidth saving with minimal compromise in transmission quality. It shows good potential for use in future optical network systems to meet the ever-increasing demand for network capacity. In future, we will use SEFDM for optical interconnects in data centers or high-performance computing systems that require high capacity density and high spectral efficiency.

Zhaohui Li obtained his BS and MS degrees from Nankai University, China, and his PhD from the Nanyang Technological University, Singapore, in 2007. He joined the Institute of Photonics Technology as a professor in 2009.

Qi Sui obtained his PhD from the Hong Kong Polytechnic University, China, in 2015. He joined the Institute of Photonics Technology as a lecturer in 2015.