Texture classification is a standard image processing technique, in which textures are characterized by measuring the spatial fluctuations of image amplitude. This can be achieved using multifractal analysis. Multifractal analyses deal with the scaling behavior of measure distributions in a geometrical and statistical manner, and they involve evaluating the behavior of structure function logarithms within fine-scale limits. In general, higher-resolution images permit more accurate texture classifications, but the precise image scale poses a major problem for multifractal analyses. The large number of coefficients available for linear regressions at small scales leads to an estimation bias. Excluding some of these coefficients, however, increases the estimation variance.

Multifractal analyses can be used for the analysis of signal self-similarity, broad probability distributions, multiplicative processes, and rare events, as well as for the classification of textures. Although multifractal analysis methods have been proposed previously, improvements to the parameter that is derived in the process of multifractal analysis—known as the scaling function1, 2—can be made by reducing the computation time and increasing its accuracy. In addition, texture characterizations have rarely been based on 2D multifractal analyses in the past.

We recently presented a 2D wavelet leader-based multifractal formalism for texture classification.3 With this method, we can perform accurate, complete, low-memory, and low-processing-power multifractal characterizations of textures in complex images. We improve (in terms of accuracy and computational complexity) the performance of the multifractal spectrum—based on the wavelet leaders—with the use of multiresolution quantities. These quantities are known as maximum coefficients of discrete wavelet transform for 2D multifractal analysis, or DmaxWT. From the fractal spectrum of an image, we select discriminative multifractal features that are then applied to the texture classification using a standard nearest-neighbor classification approach.

Our new method has applications in the design of quality control instruments, and for the diagnosis of texture defects in several materials. A possible use of our approach is the automatic evaluation of some food quality aspects. We have therefore used our new texture classification technique to discriminate between raw, pasteurized, and ultra-heat-treatment (UHT) milk (see Figure 1), i.e., milk that has been heated to various degrees.4 Our experiment was conducted on 30 classes of nontraditional images (i.e., images with textures that are difficult to distinguish in a normal fashion). We used 25 samples of high-resolution images and 25 low-resolution images for each class. Our multifractal analyses of these samples are illustrated in Figure 2. In these analyses we estimated the mean values of various DmaxWT parameters, namely, the maximum and the width of the multifractal spectrum, D(h), as well as a measure of spectral asymmetry. We also calculated the standard deviation for each of these parameters. Our results indicate that the multifractal descriptor method can be used to effectively distinguish between different textures and is a viable new analysis method for identifying milk heat-treatment effects. 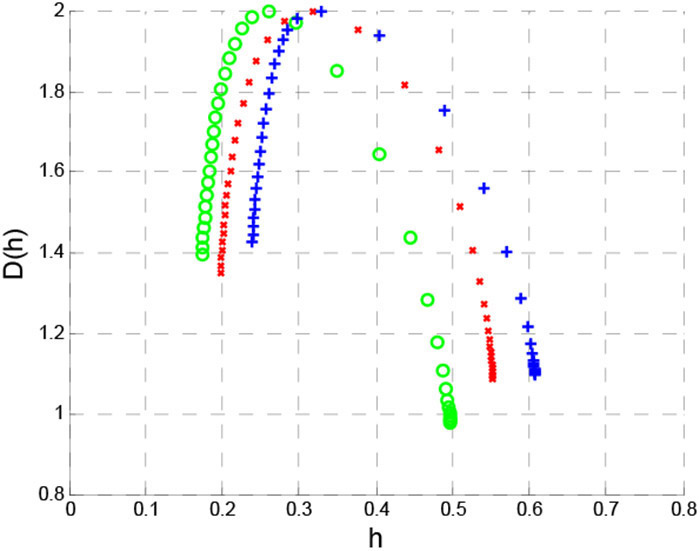 Figure 2. Comparison between the maximum coefficient of discrete wavelet transform for the multifractal spectra DmaxWT, which were obtained during the analysis of the milk samples shown in Figure 1. Green, red, and blue symbols relate to raw, pasteurized, and UHT milk, respectively. D(h): The multifractal spectrum. h: The singularity strength (i.e., the local ‘Hölder’ exponent).

We have quantitatively evaluated the performance (bias and variance) of our texture descriptor, by conducting texture classification of two datasets. In these experiments we used a texture dataset that consisted of 30 classes of images (each with 25 high-resolution samples and 25 low-resolution samples). We selected a ‘training’ set as a fixed-size random subset of the classes, and all remaining images were used as the test set. We used a chi-squared test to compare the results from both datasets, and combined this with a one-nearest-neighbor classification. We compared the results from our approach with those obtained from various image-recognition methods, i.e., the Varma-Garg-fractal (VG-fractal),5 Varma-Zissermann-joint (VZ-joint),6 and high-level structure reconstruction (HLSR)7 techniques (see Figures 3 and 4). Through these comparisons we have verified the accuracy and efficiency of our classification approach.

We are able to achieve our accurate textural classifications with modest computational costs and memory needs. These requirements are in the same range as for a simple discrete wavelet transform, and are orders of magnitude lower than with the HLSR method. The VG-fractal and VZ-joint methods both have much weaker performance and higher computational costs than our new technique.

We have proposed a new method for textural classification. Our descriptor is robust to environmental changes and encodes rich textural information. We have conducted experiments on several texture datasets that show our descriptor has excellent performance. Our approach enables accurate and efficient characterization of textural irregularities and has various applications. These include the detection and classification of pathologies in biomedicine, milk classification, and potential industrial classifications. We are now planning to implement (using OpenGL or OpenCL languages) real-time texture characterization with a new high-performance graphics processor. In addition, we will soon be testing our method with an optical imaging experiment.8

Smain Femmam obtained his MS, PhD, and HDR in signal processing and computers from the University of Versailles and UHA in 1997, 1999, and 2013, respectively. He is now director of research. His main research areas are signal processing, safety systems, and communication. He is a senior IEEE member.