Due to its unconventional electron confinement and high mobility, graphene—an atomically thin, single-layer carbon sheet—possesses unique optoelectronic properties.1 Since its electronic characterization, experiments have demonstrated the voltage-tunable gating behavior of graphene, paving the way toward compact transistors and logic devices.2 Photonic nanodevices and electromagnetic manipulators based on plasmonic metamaterials have more recently been integrated with graphene, opening up new possibilities for optical sensing and heat transfer enhancement.3

Figure 1(a) illustrates the near-field vacuum gap between graphene-covered semi-infinite D-SiNW arrays. Near-field heat transfer formulations (based on fluctuation-dissipation theory) describe the behavior of conventional materials with a linear electric field response. For these formulations to be valid for our setup, the gap (d=200nm) must be larger than the periodic spacing between the nanowires (∼100nm).5 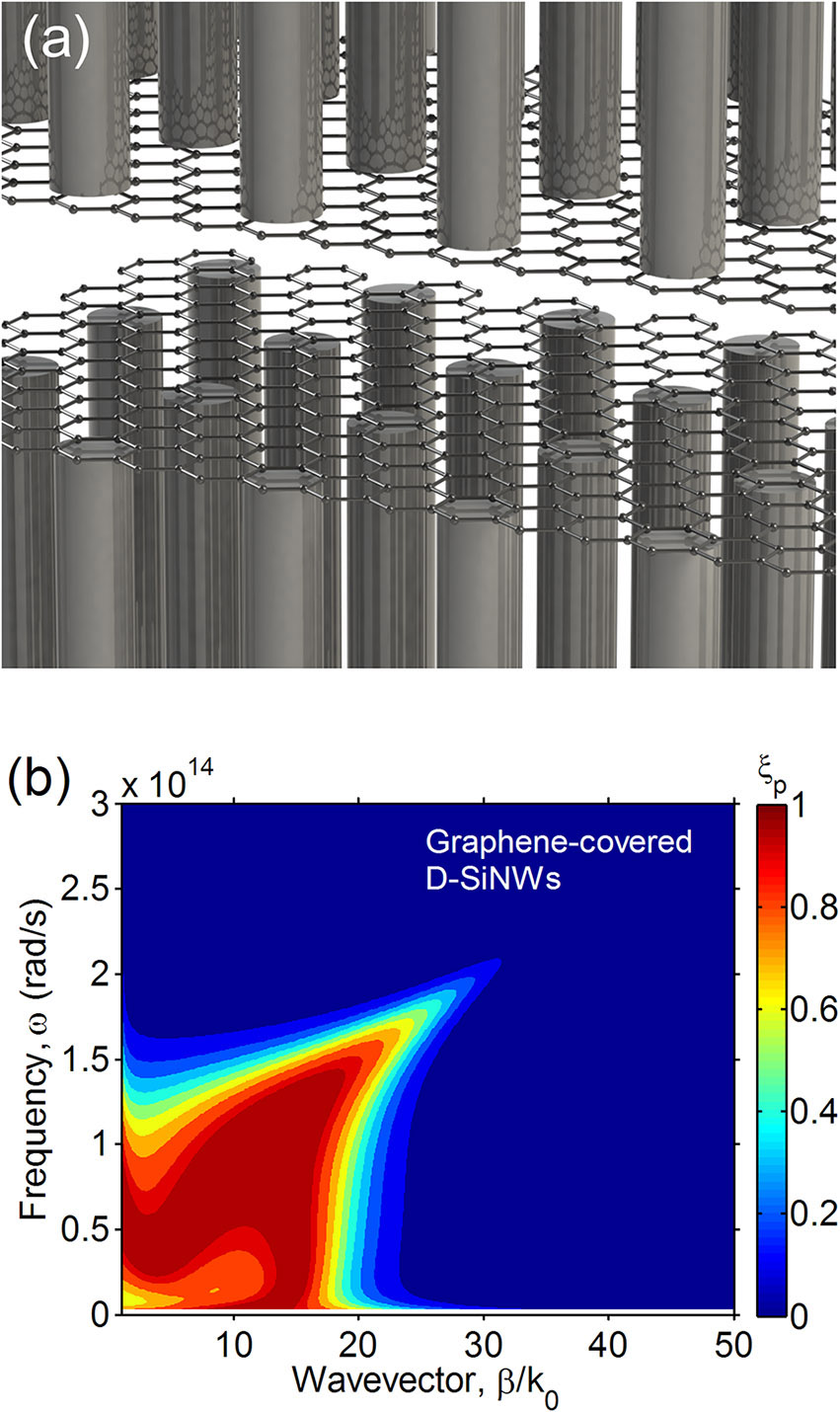 The near-field tunneling mechanism between D-SiNWs6,7 leads to a broadband hyperbolic mode in frequencies below 1.7×1014rad/s. Here, photon tunneling is permitted in deep evanescent regimes. We used computer modeling to determine the near-field transmission coefficient between two infinitesimally thin sheets of graphene separated by a vacuum gap of 200nm. Because the underlying substrate is held under vacuum, the only method of tunneling is via the coupling of surface electromagnetic waves. These surface charge oscillations, called surface plasmon polaritons (SPPs), are excited under narrow and localized evanescent modes. Figure 1(b) demonstrates the effect of combining D-SiNW substrates with doped single-layer graphene sheets (chemical potential = 0.3eV). Graphene doping can be accomplished by introducing charge impurities into the material (e.g., nitrogen) or by applying a gate voltage.1, 2 This two-mode hybridization allows for near-perfect tunneling (i.e., a photon transmission coefficient of ∼ 1) in large evanescent wavevectors for a broad frequency range.

Vertically aligned carbon nanotubes (VACNTs) also exhibit broadband hyperbolic modes, making them suitable for use as substrates for graphene-assisted near-field transfer. However, recent work has shown that graphene may in fact suppress an intrinsic SPP mode in VACNTs.8 Depending on the doping energy, the presence of graphene can modulate the dominant contribution of near-perfect transmission between low- and high-terahertz-frequency regimes. The two-mode hybridization is therefore shown to require minimal contribution from the intrinsic substrate SPPs.

Corrugated polar materials and gratings represent other metamaterial geometries that may support graphene. Figure 2(a) shows two semi-infinite silica gratings covered with graphene sheets with a vacuum gap of d=100nm.9 Using exact scattering theory, we discovered that graphene can boost near-field heat flux over uncovered gratings by more than an order magnitude. The mechanism for graphene-enhanced heat flux between gratings can be understood by studying the tunneling transmission coefficient contour plots, similar to the one shown in Figure 1(b). However, in the case of this enhancement, the hybridization occurs between graphene SPP modes and the narrowband surface phonon polariton (SPhP) modes, which are characteristic of silica gratings.

Figure 2. (a) A 3D representation of graphene covering two semi-infinite silica gratings, separated by a near-field vacuum gap of d=100nm. (b) The heat flux between this near-field device is a function of the Fermi energy or chemical potential. The implementation of graphene leads to enhancement over unpatterned and uncovered substrates. Heat flux is maximized for a graphene doping of μ=0.2eV.

Figure 2(b) outlines the effect of graphene on both unpatterned and corrugated silica. The near-field radiative heat flux is maximized when graphene is doped at an intermediate value. At low doping, graphene SPPs are too weak to hybridize well. At high doping, silica SPhP modes do not support broadband tunneling transmission frequencies and therefore allow only highly localized graphene SPP bands. In general, graphene sheets can provide an order of magnitude improvement compared to uncovered gratings. However, in practice, placing two graphene sheets along a sub-micron-size vacuum gap presents limitations for the enhancement of heat flux. Fabricating samples and characterizing radiative heat flux at such small distances both represent challenging and ongoing tasks.

Tuning the far-field radiative properties of graphene is another attractive prospect. Figure 3(a) shows a thin-film silver 2D grating with a sheet of graphene above it. As a result of the properties of graphene, the transverse-magnetic wave transmission becomes wavelength-selective for a 200nm-thick 1D grating (similar to the corrugated gratings).10 Figure 3(b) illustrates the transmission profile, determined using rigorous coupled-wave analysis (RCWA),11 for a range of wavelengths and incidence angles. Without graphene, transmission increases monotonously with wavelength. 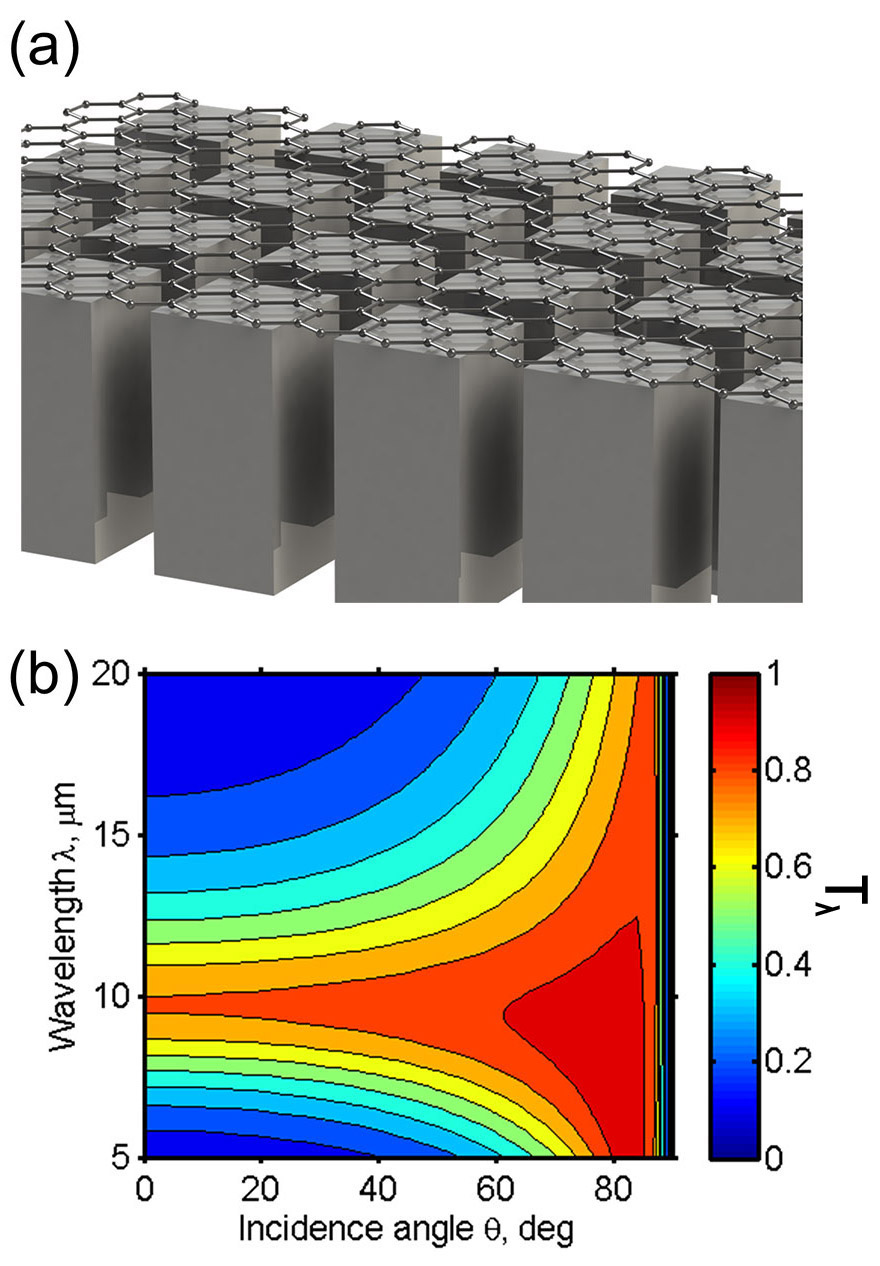 Figure 3. Graphene can serve as a metallic thin film over a thin 1D or (a) 2D grating made of silver. (b) The transmittance (Tλ) as a function of wavelength and incidence angle for a 200nm-thin 1D grating, covered by a sheet of graphene doped at μ=0.8eV. Note the preference for a wavelength of ∼9.7μm. Without graphene, transmittance increases monotonously with wavelength.

In summary, we have shown the remarkable contribution of graphene in the IR wavelength or terahertz frequency regime when integrated with photonic metamaterials. In the near-field regime, the addition of two graphene sheets on metamaterial substrates leads to graphene SPP bands, thereby augmenting the broadband hyperbolic modes of the nanowire array. As a result, graphene can provide better photon tunneling without the need for bulky thermal rectifiers or emitters. Graphene also exhibits useful properties in the far-field regime. Because it is so thin and yet highly conductive, graphene can act as a selective and narrowband transmitter for thin-film polarizers. The most noteworthy property of graphene is its tunability, which enables the enhancement of desired radiative properties at specific IR wavelengths. We are currently carrying out experiments to demonstrate the properties of these metastructures in both the near- and far-field regimes.

Richard Z. Zhang is a PhD student. His research interests are carbon nanotubes, graphene, and optoelectronics. He has published over four journal papers and a patent.

Xianglei Liu is a PhD student. His research interests are thermoplasmonics, mesoscopic thermal radiation, and Casimir interactions. He has published over 12 journal articles.

Zhuomin M. Zhang is a professor. He received his PhD from MIT in 1992. His research interests are in nanoscale thermal radiation, metamaterials, and nanophotonics for energy conversion, thermal management, and temperature measurement.