Bright, spatially-coherent light sources have enabled novel applications in areas ranging from spectroscopy and communications to high-resolution imaging and material processing. A continual challenge, however, is to develop laser sources at new wavelengths tailored to specific applications. Until now, the primary approach to generating new wavelengths has been to develop new laser materials, but the possible wavelengths are generally limited by the intrinsic material properties.

Another approach is to use nonlinear optics to convert laser radiation from one wavelength to another. The last decade has seen a veritable revolution in this field with the development of the fiber supercontinuum. This truly remarkable source of optical radiation can emit bright, coherent light spanning the visible and near-IR spectral regions.1, 2 Supercontinuum sources are finding significant commercial success in areas including optical frequency metrology, spectroscopy, and, in particular, microscopy, where their brightness and large bandwidth have greatly increased the achievable resolution compared to that obtained with traditional lamps or LED sources.

Generating a supercontinuum is relatively easy and only requires injection of intense pulses of light from a pump laser into an optical fiber with appropriate dispersion characteristics:3 see Figure 1 for a supercontinuum generated by injecting femtosecond pulses into a highly nonlinear photonic crystal fiber. Although the method is rather straightforward, the physics of supercontinuum generation is much more involved, being based on a light-induced nonlinear electronic polarization in a dielectric medium. If the intensity of the pulses injected into the medium is sufficiently high, the refractive index of the medium can be modified in proportion to the incident intensity, a phenomenon commonly referred to as the optical Kerr effect. This change in the refractive index in turn induces a time-dependent phase shift or ‘self-phase modulation’ across the temporal pulse that generates new wavelength components.4Explaining fiber supercontinuum generation in terms of only self-phase modulation, however, is an oversimplification. The rich physics that underpins the generation of a broadband supercontinuum truly arises from the complex interaction between the nonlinear self-phase modulation and the linear dispersion. 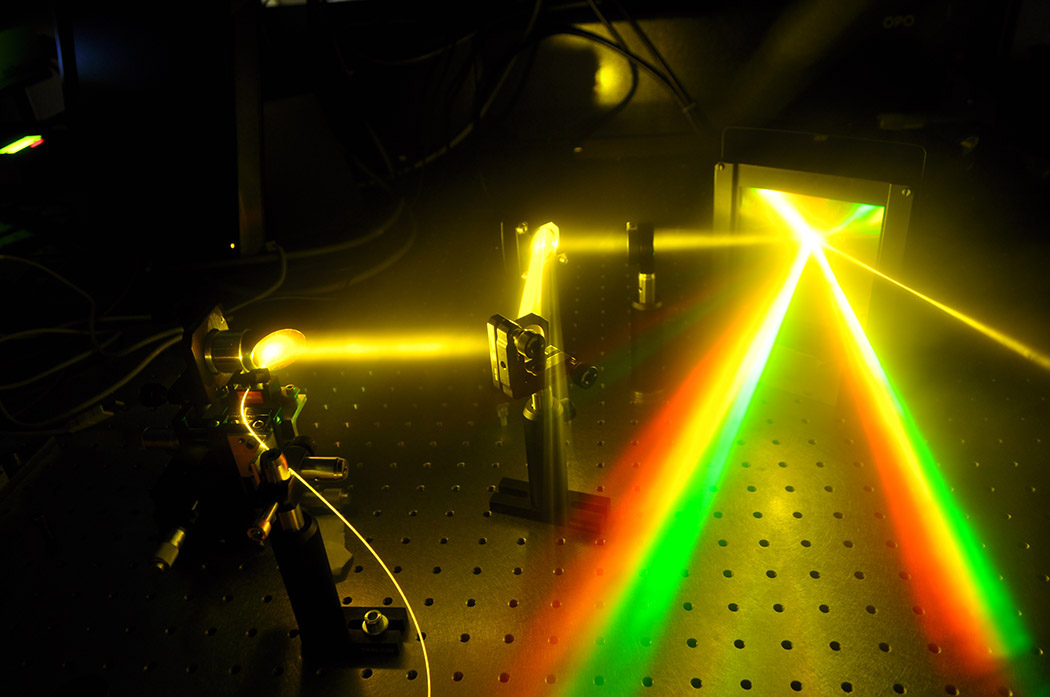 Figure 1. Supercontinuum generated by injecting femtosecond pulses from a titanium:sapphire laser at 800nm into a photonic crystal fiber. The supercontinuum is dispersed using a diffraction grating onto a screen. Although we see only the visible portion of the spectrum, the supercontinuum wavelength range actually extends from below 500nm into the IR beyond 1500nm. Credit: Antti Aalto.

We, and others, have put significant effort into modeling supercontinuum generation. We first developed accurate pulse propagation models that led to a full understanding of supercontinuum dynamics.5 For example, this unraveled the central role played by soliton structures that manifest as a result of interplay between linear dispersion and self-phase modulation. In fact, the concepts of soliton physics are essential to obtain a correct physical picture of supercontinuum generation.5, 6 The wide range of accessible regimes where subtle soliton dynamics can occur continues to throw up surprises, revealing unexpected analogues of phenomena usually found in seemingly completely different systems, such as the emergence of instabilities and rogue waves.7 Such findings open up new perspectives to study analogies with other areas of physics.

Modulation instability is intimately linked to theories of four- wave mixing and parametric wavelength conversion, and it plays a key role in supercontinuum generation when long pump pulses or continuous-wave pump lasers are used. In this case, nonlinear amplification dynamics of the noise initially present on the input pulses can lead to a complete loss of coherence of the supercontinuum associated with large fluctuations at the fiber output, both in time and spectrum. Such seemingly random fluctuations can give rise from time to time to very intense spikes of light. These rare and extreme fluctuations in the value of the optical field can be compared to wave group propagation on deep water, hence the term ‘optical rogue waves’8 that has been coined to highlight the possible analogy with the ocean case.

These fluctuations or rogue waves have been the subject of intense studies in the past few years, not only because of the interesting physics involved but also because of the potential practical applications. We reviewed progress in this area7 and showed that, besides the statistical signature such as long-tailed probability distributions that are often considered to be the defining feature of rogue waves, specific nonlinear processes actually drive the appearance of these extreme optical structures. Specifically, we showed how the dynamics of modulation instability and the initial stage of supercontinuum generation can be described in terms of localized nonlinear waves or ‘breathers’ where energy is concentrated at a particular point along the propagation. Because modulation instability is seeded by a broadband noise, these breathers emerge with randomly varying characteristics. Their subsequent nonlinear interaction can give rise to extreme fluctuations in the electric field and the rare appearance of intense spikes of light. Understanding the physics underpinning these extreme fluctuations has been central to developing external seeding techniques to improve significantly the stability of supercontinuum sources generated by long pump pulses or continuous-wave pumps. More generally, the few past years of research in this area have provided new insights that could prove useful not only for the realization of supercontinuum sources but also for optimizing technologies such as high-repetition-rate pulse-train generation, wavelength conversion, and broadband fiber parametric amplifiers.

In summary, understanding the complex physical phenomena behind supercontinuum generation has enabled compact tabletop systems with reduced power demands and led to new technological developments and major contributions in many different fields of science. A large number of applications would benefit from table-top, all-fiber, supercontinuum sources producing broadband light in different regions of the electromagnetic spectrum including the ultra-violet and mid-infrared. With nonlinear materials operating at these wavelengths being developed, one can expect a major leap forward in areas such as high-resolution imaging, chemical detection, molecular fingerprinting, sensing, and spectroscopy. Our next challenge is to gain full control over the inherent fluctuations associated with a supercontinuum generated from long pump pulses or even continuous-wave lasers, which would also enable the development of compact and cost-effective broadband coherent sources, highly desirable for frequency metrology or arbitrary waveform generation.