The science fiction depiction of teleportation refers to the transfer of matter between two spatially separated spaces without the transfer of information. This largely differs from the concept of quantum teleportation, one of the most exciting concepts in modern quantum theory, though often misunderstood.1 The key difference between the sci-fi portrayal and quantum teleportation is that information is transferred between two spatially separated parties, rather than a direct transfer of matter. Applications may include quantum key distribution and quantum cryptography.

At the heart of such teleportation is the phenomenon of quantum entanglement, in which the quantum state corresponding to non-local particles cannot be described independently. Sender (Alice) and receiver (Bob) share a pair of particles that are entangled. Alice performs a set of measurements (known as the Bell states analysis) on the state of her particle and that of a third particle (Charlie)—the particle whose state should be teleported to Bob. Based on the outcome of her measurements, Alice sends a signal to Bob. Bob applies a set of unitary transformations, without knowing the state, to the state of his particle. After these transformations, the state of Bob's particle is identical to Charlie's. Note that, during this process, Alice and Bob have no information about the state of Charlie's particle. This process is probabilistic when implemented with entangled photons and linear optics,2 and means that sometimes Alice's measurement outcome—that of two particles' Bell states analysis—is not determined. Thus, Bob does not receive any classical signal, and the teleportation fails. Nevertheless, when Bob receives the signal from Alice, the state is the correct one, and teleportation has succeeded with a 100% fidelity.

We can use a single particle possessing two different quantum properties to present a non-separable state, where these two different degrees of freedom cannot be described individually.3 This state is mathematically equivalent to a two-particle quantum-entangled state, but represents two different and important concepts of quantum mechanics: contextuality and non-locality. Furthermore, single-particle, non-separable states have advantages over two-particle, entangled states. For instance, non-separable Bell states can always be determined with 100% fidelity by means of linear optics.4

Here, we propose and implement a novel way to perform quantum teleportation,5 and refer to this as remote-hybrid-teleportation (REHYT). With this protocol, we can teleport information from one degree of freedom (polarization) to another (orbital angular momentum, or OAM) of two spatially separated photons deterministically and with 100% fidelity.6

Figure 1(a) shows the experimental setup. We generate a pair of photons entangled in OAM degree of freedom by spontaneous parametric down conversion, and share these between sender (Alice) and receiver (Bob). Charlie prepares an arbitrary state in the polarization degree of freedom of Alice's photon A, without sharing the state information with Alice. The photon in Alice's arm, shown in Figure 1(a), can be found in four polarization-OAM non-separable Bell states. These are mutually orthogonal and form a complete basis in the polarization-OAM Hilbert sub-space (infinitely extended Euclidian space). Alice performs single-photon polarization-OAM Bell state analysis and sends the outcomes to Bob by a classical channel. Bob, based on the outcome of Alice's Bell state measurements, applies one of the unitary operators from the set: {1, σx, iσy, σz} to the OAM state of his photon. He finds his state to be identical to Charlie's, but in OAM degree of freedom. In our experiment, we verified the state of Bob's teleported photon in real-time by means of fast electronics and by keeping the teleported photon in a delay line. To examine our scheme qualitatively, we compared the theoretically predicted probability distribution of teleported states with the experimental data obtained, and found the two to be in very good agreement. Figure 1(b) shows three examples of the successful teleportation. For completeness, we also measured the fidelity by performing quantum state tomography on the teleported states. Fidelities of different states were all above 98.4%, indicating their very high quality, and validating REHYT. 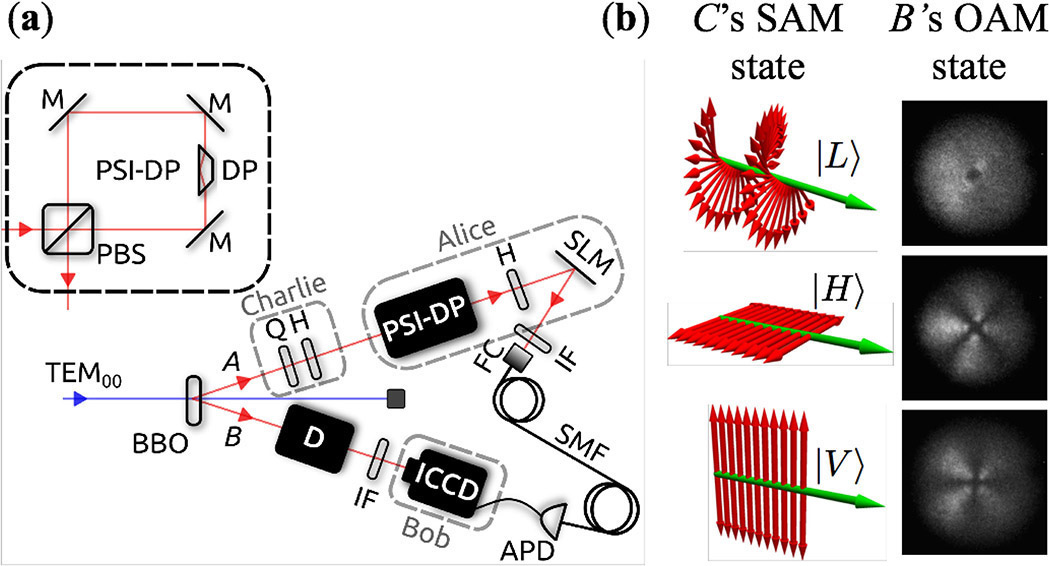 Figure 1. (a) The setup for remote-hybrid-teleportation of photons from the spin to the orbital-angular-momentum degree of freedom (OAM DOF). A UV laser pumps a barium borate (BBO) crystal to generate photon pairs that are entangled in their OAM DOF. A polarizing Sagnac interferometer containing a dove prism (PSI-DP), shown in the inset, in combination with the half-wave plate (H), spatial light modulator (SLM), bandpass interference filter (IF) and single mode optical fiber (SMF) perform the single photon spin-OAM non-separable Bell state measurement.4The photons couple via a fiber coupler (FC) into the SMF for detection by an avalanche photodiode (APD). The APD triggers the intensified charge-coupled camera (ICCD) to record the spatial distribution of photon B. During the preparation and measurement of photon A, photon B propagates in the delay line (D), compensating for electronic delay. (b) First and second columns show the polarization (SAM) state of C and the OAM state of the teleported photon to B. |L〉, |H〉, and |V〉: left, horizontal, and vertical polarization, respectively. M: Mirror. PBS: Polarizing beam splitter. TEM: Transverse electromagnetic mode—this refers to the fundamental transverse mode (beam with a Gaussian profile). Q: Quarter-wave plate.

In summary, we have experimentally shown that it is possible to transfer a generally unknown quantum state from the spin angular momentum space of a single photon onto an OAM subspace of a distant photon. The very high fidelities of the REHYT scheme and the relatively simple experimental technique make our teleportation protocol very promising for quantum cryptography. Our future work will focus on developing OAM for use in various quantum computing applications. These include photonic quantum memories, quantum gates, and the use of qubits in the computing process.

The authors acknowledge the support of the Canada Excellence Research Chairs (CERC) Program.