The relentless progress of electronics predicted by Moore's law1 has forced the pace of fiber optic development. Fibers need to carry data from sources and sinks such as large electrical switching and processing chips, but there is no mechanism to automatically ensure that, as these chips advance, the laser and photodetector components connecting them can keep pace.2, 3 If the optics cannot match a speed increase by the electronics, it is possible to use multiple aggregated parallel streams (parallelism) until the optics can catch up.

Photons interact with each other less than electrons. This makes it straightforward to implement parallelism in optics because of the reduced likelihood of unwanted interactions when multiple beams are adjacent or even crossing each other. It is also easier to run optics at higher speeds than electronics because of the lack of interaction with the media being transmitted through. Historically, the typical scenario has been parallel electrical lanes serialized into a single high-speed optical signal.

However, with the rise of data rates, optics has started to need parallelism as well. When the optics run at higher rates (more serialized) than readily available electronics, it leads to complexity and a higher product cost. The main reason is the expense of the optics channel: both the optoelectronic transceivers at each end and the fiber link itself. There are several domains of fiber optics, distinguished by link length, and each with its own set of technologies. In the short-reach domain (tens to hundreds of meters) the cost of the optics has been relatively low. Typically these are multimode optics with the same speeds as high-speed electrical links. Components with 12 lanes are common, but it is also possible to use 24, 26, or greater. In long-reach (hundreds to thousands of kilometers), the fiber link cost is most significant. To remedy this, we can use a form of parallelism that has been very successful: wavelength-division multiplexing (WDM). This combines multiple data streams carried on separate wavelengths into a single fiber. The domain that has struggled the most with parallelism is the medium-reach (hundreds of meters to 100km), where single-mode transceivers dominate the cost.

As shown in Figure 1, it is possible to integrate serialization (time multiplexing of data by high-speed electronics) inside electronic processing chips up to the speed of current electronic technology, denoted R in the figure. For the serial version (top of Figure 1), there is a second stage of serialization between the chip and optics. By definition, the serialization external to the chip exceeds this native rate, and hence requires advanced design, often using exotic materials at high cost. The difficulty increases as R goes up with each generation. Also burdened are the optical components, such as lasers and associated electronic chips, including laser drivers on the transmit side and amplifiers on the receiver. In the parallel version at the bottom of Figure 1, an optical multiplexer replaces the second stage of electrical serialization, typically using the WDM technique. The optical multiplexer acts on the wavelength, not the data rate. It does not have to become more advanced as R increases over time. 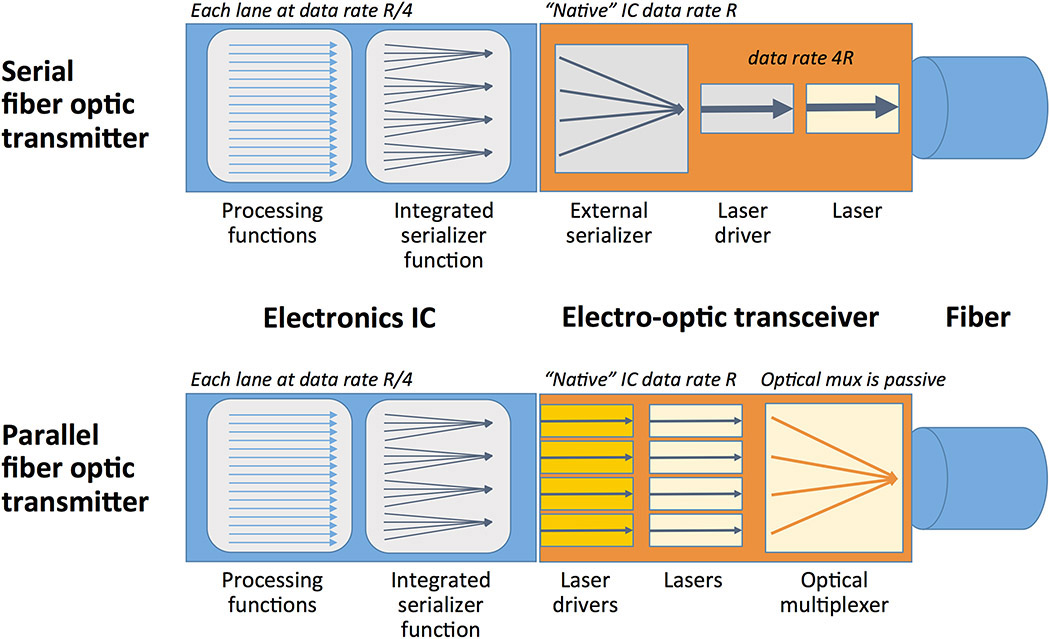 In the current generation of fiber optics, even the medium-reach link versions have gone parallel. At present, the native speed of the electrical chip interconnect is 10Gb/s, moving to 25Gb/s, and correspondingly the optical speeds are moving from 4×10Gb/s to 4×25Gb/s. For 400Gb/s, a leading proposed implementation is 8×50Gb/s.

However, there is still a technology gap. The cost of single-mode transmitters is as much in the ultra-precise alignment of the light beams into single-mode fiber as the laser chips. Recently, there has been much progress in silicon photonics, some of which looks likely to address part of the chip cost. This approach seeks to integrate the lasers. However, realizing efficient coupling and high optical power remains challenging.

The alignment becomes more difficult as the number of lanes increases, as evidenced by the few implementations of more than four lanes in a single mode. We have developed an alignment and packaging approach that enables high-yield and low-loss alignment of up to 24 lanes of single-mode optics. We are unaware of any similar efforts to address this specific barrier to optical parallelism.

To achieve single-channel, single-mode optics, developers typically use expensive active alignment tooling. Replication for multiple channels is prohibitive, and alignment of the entire array in one step results in limited accuracy. In our approach, a micromachined silicon structure forms an array of independent alignment fixtures,4 taking advantage of mechanical leverage to enhance accuracy (see Figure 2). Essentially, the silicon structure is a miniaturized version of a benchtop micropositioning stage, which we permanently solder in place. 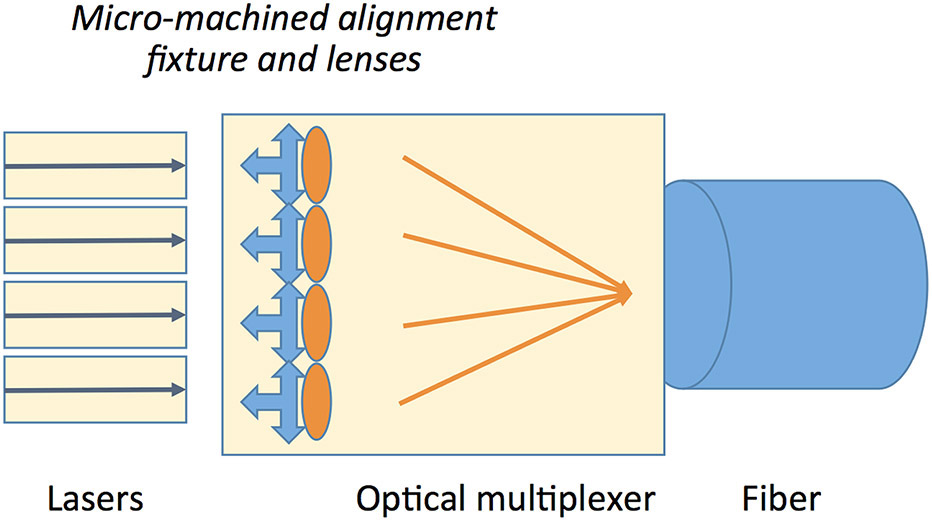 In summary, we have shown how silicon micropositioners enable integrated multi-wavelength transmitters, removing the barrier to high degrees of parallelism in single-mode, high-speed optical communications.

In our fiber optic application, the lens position varies in three dimensions, and it is possible to further automate this approach. In future work, we will consider the possibility of more complex generalizations of this ‘ micro-micropositioner’ that would add rotational dimensions for other applications.

Karen Liu is vice president of marketing and has more than 25 years' experience in optics and communications. Previously, she held positions at Ovum, Tellabs, and IBM Research. She received a PhD in applied physics from Stanford, and a BSE from Princeton.