Sensing interactions between single molecules by their motions

A new method from the lab of Nobel laureate W. E. Moerner enables the direct visualization of the binding and unbinding interactions between single biomolecules in aqueous solution by observing the diffusion coefficient and electrokinetic mobility.

Biomolecular interactions (the binding and unbinding between one biomolecule and its interaction partner) represent a critically important biological phenomenon. These interactions govern processes such as intracellular signal transduction and drug-receptor recognition. Single-molecule sensing methods, which enable the detection of chemical reactions in real time with unprecedented detail, are ideally suited for the investigation of these unsynchronized, heterogeneous molecular binding processes. However, the characterization of biomolecular interactions between single molecules is generally based on engineered fluorescent contrast.1 Because this technique relies on the inference of molecular changes from the emission properties of a fluorescent probe (e.g., brightness and excited-state lifetime), these methods are indirect and highly problem-specific.

We have developed a method that establishes a more direct sensing strategy with wider applicability.2 When a biomolecule binds to a partner, its size and charge characteristics are generally altered as a result of the interaction. Such perturbations in size and charge are directly coupled to changes in diffusive and electric-field-induced motions in solution. By continuously monitoring the (time-dependent) diffusion coefficient (size parameter, D) and electrokinetic mobility (charge parameter, μ) of a single molecule in solution, we are able to sense biomolecular interactions between the trapped molecule and unlabeled binding partners.

To simultaneously measure both the diffusive and electrokinetically controlled motions of a single molecule, we implemented Anti-Brownian ELectrokinetic (ABEL) trap technology. Invented about a decade ago,3 the ABEL trap is a feedback-based microfluidic device that uses voltage-induced electrokinetic forces on a nanosized object to compensate for its random 2D diffusion. Our recent optimization of the tracking algorithm and feedback loop4, 5 has enabled trapping times of tens of seconds to be achieved for single proteins and oligonucleotides in solution. This represents an improvement factor of 10,000 over the millisecond transients typically observed in fluorescence correlation spectroscopy for single molecules in solution.

Due to their high speeds, the precise tracking of single small biomolecules in aqueous solution presents a significant technical challenge. To address this, we used a novel confocal beam-scanning and photon-stamping6 technique to follow the motion of a single molecule held in the ABEL trap with photon-by-photon time resolution. We then developed a statistical algorithm to reconstruct the motion trajectory of the molecule. Using this algorithm, we were able to calculate the most likely transport parameters of the trapped single molecule as a function of time: see Figure 1(a).

Using this method, we analyzed a mixture composed of free dyes and dye-labeled 10-nucleotide (10nt) and 18nt oligonucleotides molecule-by-molecule using the ABEL trap: see Figure 1(b). Although the fluorescence brightness was the same for all three types of molecules, the difference in diffusion coefficients revealed the identity of each trapped molecule in the mixture.

Figure 1. (a) Schematic of our method. An illustrative double-stranded DNA (dsDNA) molecule is shown trapped near the center of the microfluidic chip in 2D. The photon-by-photon tracking data, together with the applied feedback voltages, are subject to a statistical learning module that estimates the time-dependent diffusion coefficient (D) and electrokinetic mobility (μ) in real time or offline. FPGA: Field-programmable gate array. (b) An example showing molecule-by-molecule profiling using a single-molecule diffusion coefficient. The identity of each trapped molecule (from left to right: single dye, single-dye-labeled 10-nucleotide single-stranded DNA—10nt ssDNA—and single-dye-labeled 18nt ssDNA), inferred from the measured D, is illustrated above the brightness trace.

To demonstrate the real-time sensing of bimolecular interactions, we used complementary short DNA strands as a model system: see Figure 2(a). Using the trap to hold one fluorescently labeled single-stranded DNA (10nt), we continuously monitored its diffusion coefficient and mobility in the presence of 2μM of its unlabeled complementary strand: see Figure 2(b). Although the fluorescence brightness showed no significant fluctuations beyond shot noise, we observed large, anti-correlated fluctuations in the motion parameters D and μ, enabling the direct visualization of the transient formation and melting of the double-stranded DNA in real time. The same data can be reprocessed offline at 50ms time resolution—see Figure 2(c)—to extract the kinetic parameters of the binding and unbinding reaction using hidden Markov models.2 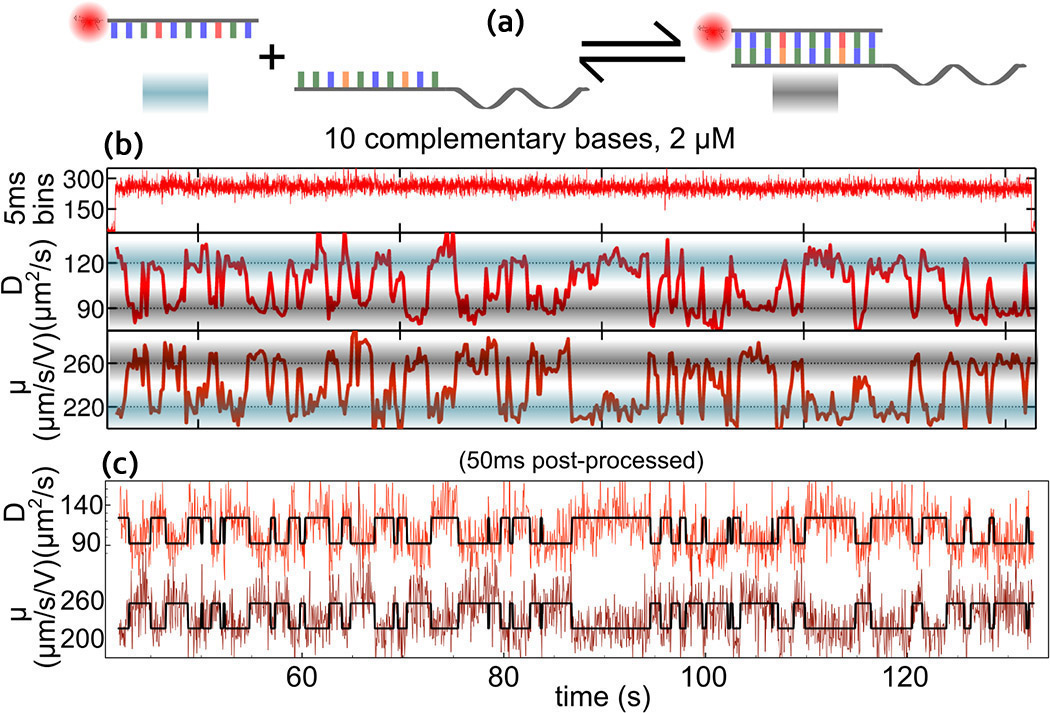 Figure 2. Real-time probing of DNA hybridization and melting processes. (a) The reaction scheme. A dye-labeled 10nt ssDNA can bind with its complementary strand to form a dsDNA, which can then spontaneously dissociate. M: Molar concentration. (b) Brightness and real-time D and μtraces of a single 10nt ssDNA in the presence of 2μM of its complementary binding partner. Cyan: The (D,μ) state representing the ssDNA. Black: The (D,μ) state representing the transiently formed dsDNA. (c) The same data reprocessed at 50ms time resolution. Black lines: States identified by the hidden Markov model analysis.

In summary, our method establishes a novel and direct approach for the measurement of the association states and binding thermodynamics of single molecules in solution. This technique, based on the observation of diffusion and electrokinetic properties, is immediately applicable in numerous fields including biology, chemistry, physics, and the pharmaceutical industry. We are currently using this method to investigate the optical properties of photosynthetic antenna protein complexes in various stages of oligomerization. Our next step is to expand the functionality of our sensing platform to enable the study of multiple simultaneous interactions, which would enable the investigation of more protein-protein interaction problems.

This work is funded by the Division of Chemical Sciences, Geosciences, and Biosciences, Office of Basic Energy Sciences of the US Department of Energy through grant DE-FG02-07ER15892.